"I'd like to start with a benediction for the festival", said Patti Smith on the first night of this year's Festi'Neuch Music Festival in Neuchâtel. The American poet-singer sang her song, "Wings", with its refrain: "It was beautiful, it was beautiful."

And so it was. Smith's mesmerizing performance that night by the Neuchâtel lakeside was one of the high points of the four-day festival, which ended June 16th.

Some of Sophie Hunger's old fans were surprised to hear her razor-sharp band and her voice grown in range and passion to match her song-writing and rock feel. The Rambling Wheels showed again that they are totally fun rockin' on stage and ready for a much wider audience: 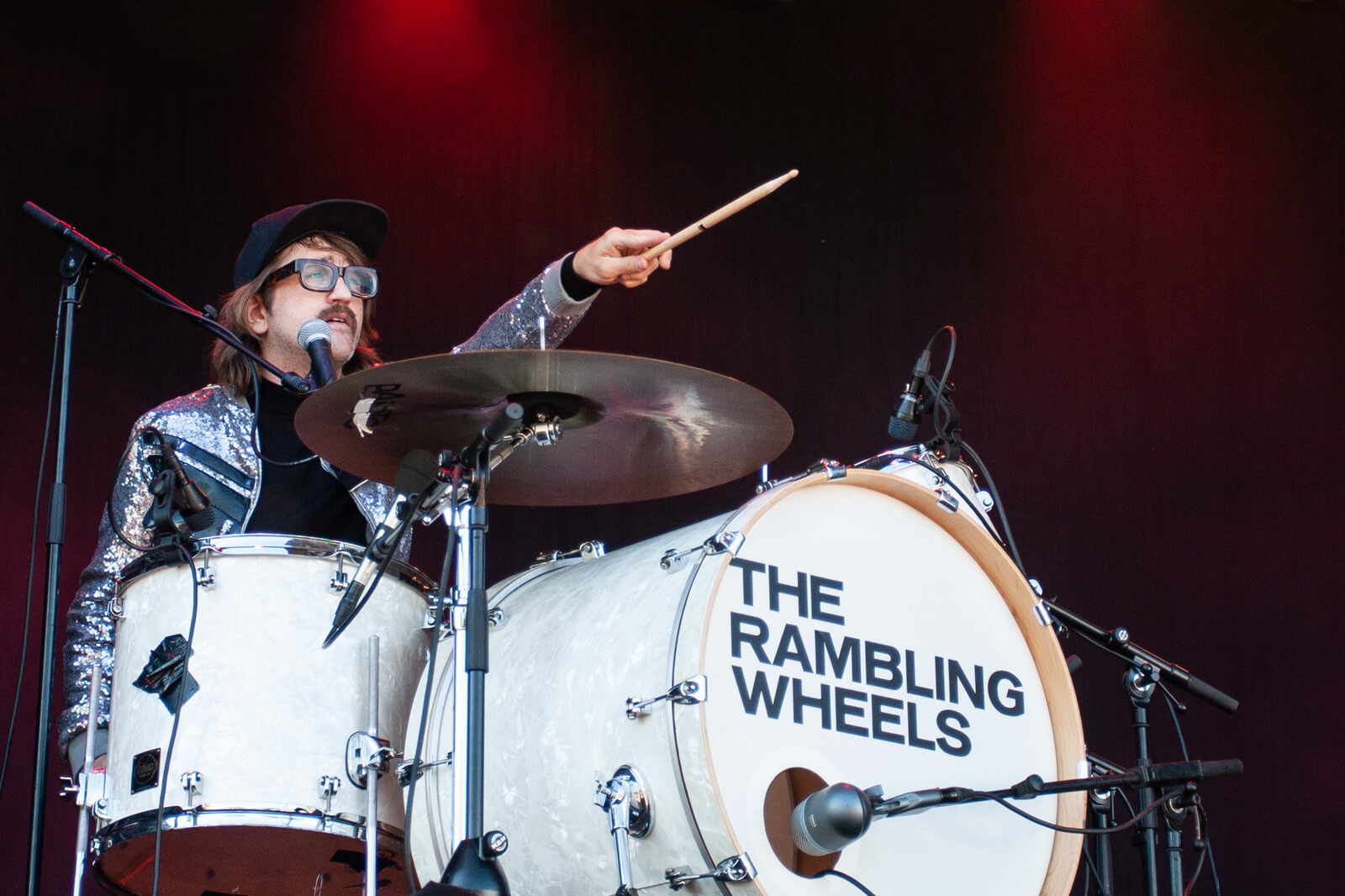 Caravan Palace were the last headliners at the big stage the last night: The 19th edition of Festi'Neuch in Neuchâtel

During four days and nights, Festi'Neuch – in its 19th consecutive year (first year: five acts) – offered 50'000 festival-goers three stages, each with its own vibe.

When you wanted to hang with a headliner and 10'000 of their closest friends, there was a stage for that under an enormous tent. (A tent that came in handy during the exciting Saturday night rainstorm.)

Under the otherwise prevailing pale sunsets and white stars, another stage welcomed a couple thousand spectators to stand and dance. And best of all for some folks, there was the totally cozy little stage below a grassy hillside, where excellent ethnic and emerging bands like Altin Gün, TootArd and Afro Kane performed. 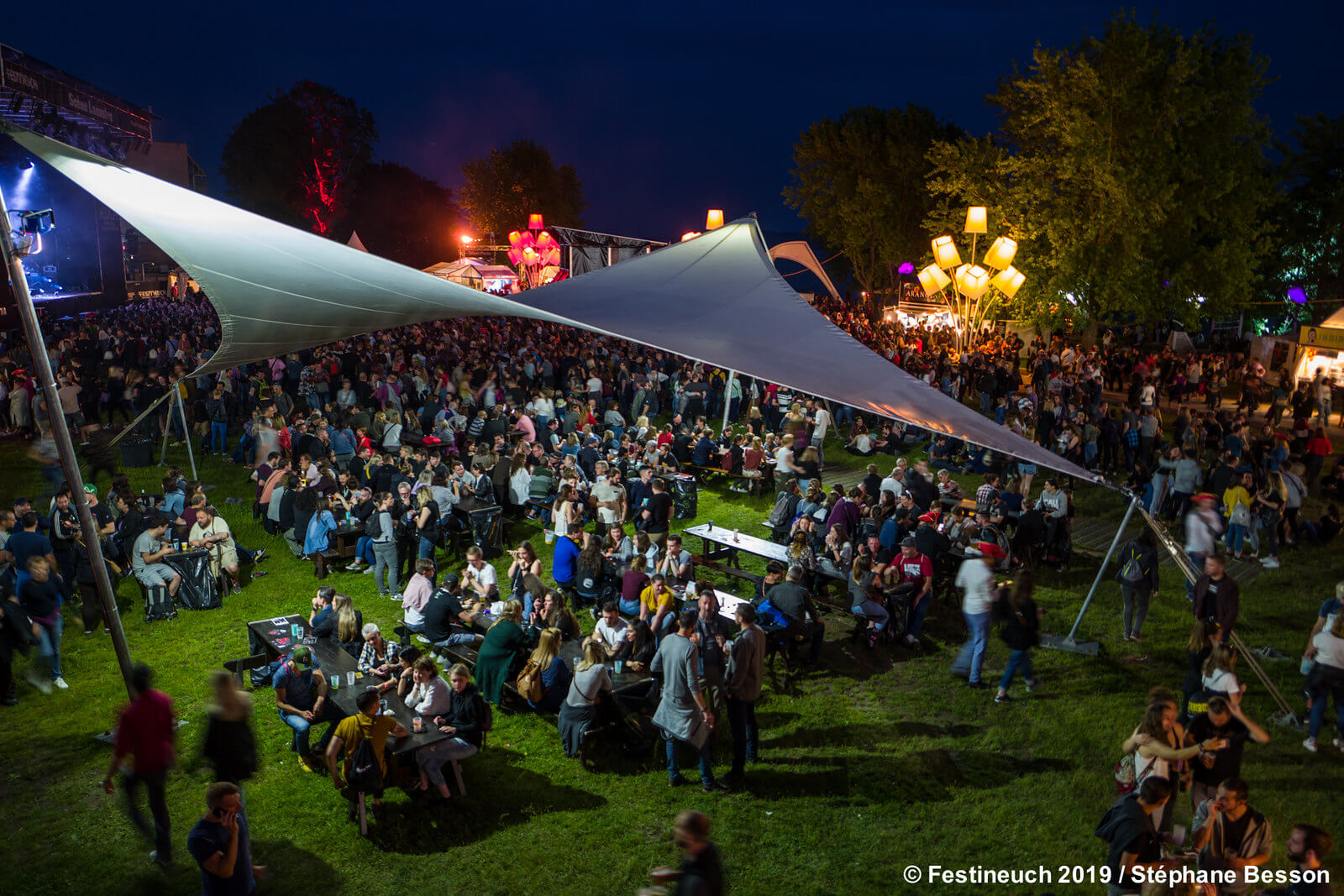 If you were thirsty for a beer but too lazy to sidle up to a bar, you just had to wait for the guys strolling the crowd with Heineken backpacks.

There were kiosks offering t-shirts, caps and other stuff, too, but most people were not there to shop.

And this flower girl was giving flowers to people, including me! If you needed a peaceful break from the music and throngs of roving people, there were always calm spots on the grass and rocks along the water. (What's that aroma?) But you did not pay 75 francs per night to sit quietly by the lake for very long.

Ever heard of a Silent Dance Party?

A more cost-effective use of your time was at the haha-named "Silent Dance Party", which is the coolest concept since headphones hit the brain pan. As you entered this closed off area (no extra charge), you were given headphones with three channels you could toggle between. Each channel linked to the music being played by one of the live DJs on stage – rap, techno, rock, pop, even (deal with it) disco. Change channels and your headphones changed color – red, green, blue. "Hey, everybody’s on red now, let’s check it out!" ("If you wanna be my lover, first you gotta be my friend.") Dancing with your sweetie, somehow you are in sync even though she's on green and you're on red. Festival-goers got in free and sometimes got out not long before dawn. Such a scene, this Festi'Neuch, a perfect fit for its not too big, not too small town, local and global. Kudos to the organizers for giving a venue to young local bands who need a place to perform.

Kudos, too, for efforts to conserve energy and minimize waste with reusable and recyclable cups and other materials. Even if some of the vendors did not pay heed this year, maybe they will next year. But of course, this being Switzerland, almost nobody littered.

Likewise, bravo to Festi'Neuch for providing free earplugs. Our ears and eyes are ready for next year.

Have you recently moved to Switzerland or are planning to do so in the near future? The lives of expats in Switzerland are...

Manage Cookie Consent
To provide the best experience, we use technologies like cookies to store and/or access device information. Consenting to these technologies will allow us to process data such as browsing behavior or unique IDs on this site. Not consenting or withdrawing consent may adversely affect certain features and functions.
Manage options Manage services Manage vendors Read more about these purposes
View Preferences
{title} {title} {title}
28 Shares
Share27
Tweet
Share
Pin1
WhatsApp