Each year, millions of thirsty tourists flock to Europe in search of the origins of their favorite elixirs. France and Italy are tops for wine, Germany and Belgium for beer, Britain for its ales, Scotland for its whiskeys, and Ireland for its Guinness.

The more adventurous will go to Poland and Russia for their vodka and the Scandinavian countries for a drop of akvavit.

A select few make their way to Prague in search of the elusive Green Fairy. If you’ve seen Moulin Rouge, you’ll know that I'm referring to absinthe. However, these parched globetrotters are on the wrong road and would be better off enjoying a tall, cool pilsner or a nip of Becherovka.

For an authentic absinthe experience, the thirsty would be best advised to visit Switzerland.

2012 marks not only the centennial of the sinking of the Titanic, but also the year in which the United States of America started a process that has led to the eventual ban of absinthe. A hundred years ago, the USA stopped imports of the Green Fairy and with the prohibition laws of 1920 effectively stopped all domestic production of the spirit. The Swiss had already banned it two years earlier in 1910.

With its banning, the herbal distillate took on its mystic air.

However, a recent scholarship in the field of absinthe history has shown that the Henriods from the Val-de-Travers were indeed the real pioneers behind the elixir.

Since in its heyday, the biggest distillery was the Maison Pernod Fils in Pontarlier, France, the French have also tried to lay claim on the drink.

In his 2011 released work L’absinthe au Val-de-Travers: Les origines el les inconnu(e)s, Jacques Kaeslin investigated the true origins of absinthe production. Through church and registration documents, he makes a strong case for absinthe originating in the Val-de-Travers, well before 1797 and well before the arrival of the Frenchman Dr. Ordinaire. What is clearly indisputable, though, is that the first commercial absinthe distillery was opened in Couvet in 1797.

The Early Uses of Absinthe

Throughout the 1800's, the drink quickly became popular with the public. Having started off as a cure-all, it was even given to French troops serving in Africa as a type of vaccination against fever, to kill off germs and fend off dystentery.

Of course it didn’t work, but the soldiers and military officers who returned from Africa brought a taste for absinthe back with them. By the 1860's, the drink, mixed with water and sugar to take off the bitter anise taste, was so popular that 5 PM was known as l’heure verte in reference to the green color of the drink.

Thanks to the workings of the free market and absinthe’s ease of production, the price dropped and the drink was popular with everyone from the wealthy classes to the struggling artist. Its popularity was furthered by the terrible plague suffered by the wine industry. Thanks to Phylloxera, a small bug that attacks the roots of the vines, wine production, particularly in France, had shrunk up to 1880. Thanks to grafting European grapes on to American grape roots, many varietals could be saved and wine production started to increase again. A bad vintage in 1911 saw a 30% drop in wine consumption as wine prices rose and people flocked back to absinthe. 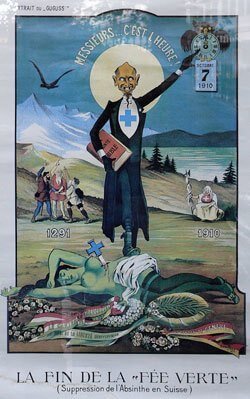 In Switzerland, it was the belief that a Swiss farmer, Jean Lanfray, killed his family and attempted to take his own life after drinking absinthe, which led to the 1910 ban.

Many facts in the case were ignored, including the fact that Lanfray was an alcoholic and drank more than just absinthe: The court records show that on that day, Lanfray drank: 7 glasses of wine, 6 glasses of cognac, 2 coffees laced with brandy, 2 crème de menthes and 2 absinthes!

Either way, the emotional story was enough to convince Swiss voters to ban the spirit in a 1908 referendum. Of course, it took two years before the ban was officially enacted and even written into the Swiss constitution.

Next week: Absinthe's Ban and Rebirth in Switzerland 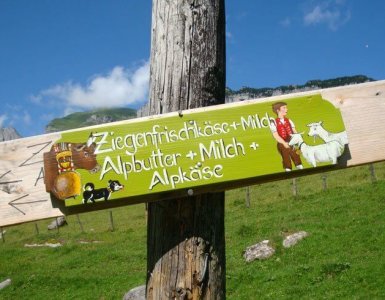 I spent my entire childhood and teenage years in Switzerland, and I thought that I knew this place pretty well. Some surprising facts about Switzerland... Before heading out for the Easter egg hunt with your kids, don’t you wonder where the unusual Easter Bunny tradition comes from? A Swiss children's song... A recent report from the European Union has confirmed what those who live in Chocolateland already know: Switzerland is the "most innovative" country in Europe...