Cable cars in Switzerland to ride in your lifetime

Just a fraction of the Swiss mountains is accessible to people like you and me. Yet thanks to no less than 129 gondolas and 251 cable cars in Switzerland, all of us can climb some spectacular peaks.

When it comes to reaching new heights, the Swiss are known the world over for their ingenious engineering. Since the opening of the first cable car in 1866, Swiss businesses such as CWA Constructions SA or Garaventa AG have installed cable cars near and far.

Here are some of the most stunning cable cars in Switzerland that will take you to new heights - sorted by altitude above sea level:

Whenever I reach the immense altitude of the Klein Matterhorn, I feel the thinness of the air. Think about it: this is as close to climbing a 4K as you will ever get without actually climbing a 4K!

In one swift movement, the hyper-modern Matterhorn glacier paradise cable car will bring you from Trockener Steg to the summit at 3821 meters above the sea. The highest cable car in Switzerland features heated seats and panoramic views.

Although I have never tried them myself, there are four special cabins with see-through glass floors made of Swarovski crystals. For an upgraded fare, you will get to see the glaciers below from a whole new perspective. And once you exit the station, you will be eye to eye with the mighty Matterhorn...

It is open all year and holders of a Swiss Travel Pass enjoy a 50 percent discount. Here is one of many available webcams mounted at the peak.

The rotating cable car to Titlis in Engelberg (3238 m)

In the Mount Titlis cable car, there is no need to rush for the best spot. The world's first revolving cable car allows everyone a perfect view. During the five-minute ride from Stand, the cabin of Titlis Rotair with its iconic Swiss cross on the bottom revolves 360 degrees.

Once you have soaked in the glacier views from the top of Titlis, there are several exciting activities lined up. Those who have never seen snow or ice should definitely walk the glacier cave. On the other side, I dare the thrill-seekers among you to try the Titlis Cliff Walk. Imagine a 100-meter suspension bridge spanning across the void...

Except for a one-week maintenance period in November, the Titlis Rotair cable car operates year-round. Check out the various webcams and get 50 percent off with a Swiss Half-Fare Card or a Swiss Travel Pass.

Ever since its first international appearance in 1969, the Schilthorn in the Bernese Alps has gained more and more fame. Back then, it served as a filming location for James Bond’s On Her Majesty's Secret Service.

At the time, the film production partially financed the cable car and the revolving mountain station which served as Blofeld's hideout. While Piz Gloria went up in flames at the end of the movie, the Schilthorn mountain base has survived and thrived.

Today, there is a restaurant with a Bond-inspired menu, an interactive museum, a “Walk of Fame” dedicated to the secret agent, as well as fantastic views of Eiger, Mönch, and Jungfrau.

From Stechelberg in the valley, take the twice hourly cable car via Gimmelwald to Mürren. Then, transfer to the famous cable car that was featured in the James Bond movie.

Opened all year, Schilthorn offers fare reductions to holders of a Swiss Travel Pass. The trip to Mürren is fully covered while the cable car to Schilthorn is 50 percent off. Preview the vistas on the webcam.

It always astonishes me how accessible some of Switzerland’s peaks are to the public. Glacier 3000 is a good example as it is easily reachable with public transportation from all directions.

The easiest way to reach this glacier world is to take the postal bus from either Gstaad or Les Diablerets to the cable car station at Col du Pillon. From there, the cable car ride to astonishing heights of nearly 3K will only take fifteen minutes. It is easy to forget that the 1400 meter difference in altitude comes with a temperature drop, so pack a jacket even during summer. 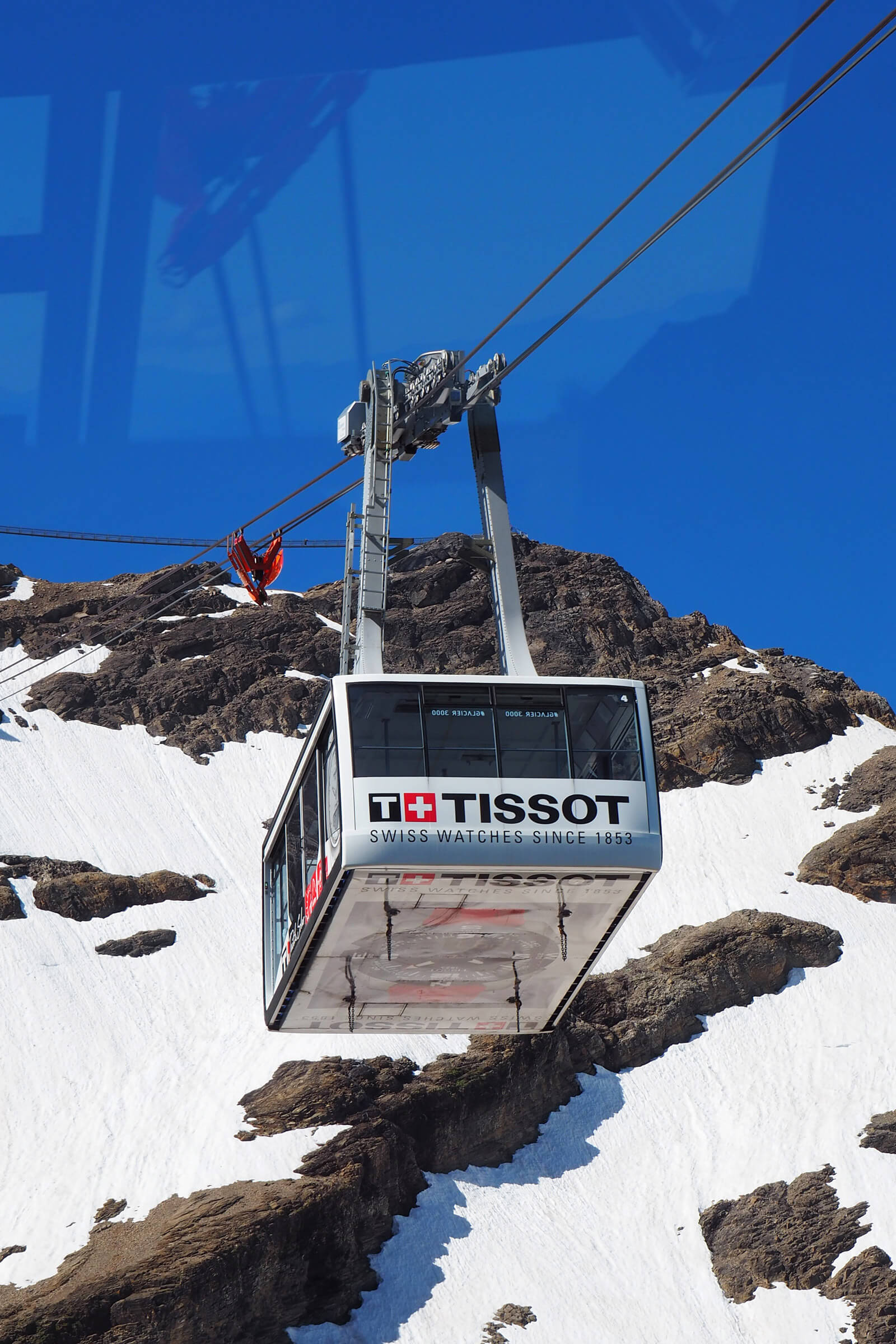 Apart from walking in the snow and seeing the majestic glaciers, highlights at the top include the Alpine Coaster Ride. The world's highest toboggan run operates between May and September. And I sure felt an adrenaline rush when crossing the Peak Walk by Tissot, the world’s first suspension footbridge between two peaks...

Have a sneak peek on the webcam, then enjoy 50 percent off the Glacier 3000 cable car with a Swiss Travel Pass. It is open all year round for day visitors.

A visit to the Jungfraujoch is on top of many bucket lists for a good reason. Up until 2021, the peak was exclusively reachable by a cogwheel railway. Yet, thanks to the Eiger Express cable car link, the entire journey has been cut by a staggering 47 minutes.

From the brand-new terminal in Grindelwald, the trip to the Eiger Glacier station at 2320 meters above the sea takes a mere 15 minutes.

The Eiger Express is the world's most modern tricable (3S) lift system that combines all the benefits of a gondola cable car and an aerial tramway. Each of the 44 cabins holds 26 seats, and the engineers were tasked with leaving a minimal footprint in nature. As a result, the 6.5 km track requires only seven supporting towers.

The mythical cable car to Pilatus in Lucerne (2128 m)

Mount Pilatus high above Lucerne is one of my favorite peaks. I recommend a day trip from Lucerne that combines a boat, a cogwheel railway, and two types of cable cars. The fairly new Dragon Ride cable car is the final link from Fräkmüntegg to the summit.

The cabin design reminds me of some kind of cockpit. There are unobstructed views thanks to floor-to-ceiling windows, and I highly recommend grabbing a seat in the front row. You will feel like a captain in an airplane as you glide up to the summit of the mythical dragon’s lair...

Mount Pilatus offers an instant and refreshing change of perspective. Just moments ago, you were at the bottom. But now, Central Switzerland below looks like a miniature railroad set. And once you grasp the sheer size of Lake Lucerne, it becomes apparent how Switzerland can be the main water source of Europe.

Along the flower path, you will not only see the delicate alpine flora. I highly recommend booking an overnight stay at one of the two hotels. Because those who remain up there once all the tourists have left will surely spot ibex as they graze during dusk and dawn.

This itinerary from Lucerne to Mt. Pilatus and back is called the Golden Roundtrip. It is open nearly all year except for two weeks of maintenance in late October/early November. Check the webcams for a preview and get 50 percent off the cable car with a Swiss Travel Pass.

The Stanserhorn in the Uri Alps is a bit off the main tourist route, making it a legitimate alternative to central Switzerland's Blockbuster peaks. The Stanserhorn has a revolving restaurant, as well as a nature reserve with rare alpine plants. And if you get lucky, you might even spot a marmot!

Start by taking the train to Stans, which is about a 20-minute ride from Lucerne. Just steps from the main train station the historic funicular that was built in 1893. And approximately 25 minutes later, you will transfer onto the waiting cable car.

The aptly named CabriO cable car is the world's first double-decker cable car! The top floor with space for thirty passengers feels a bit like a boat deck, offering unprecedented views of ten lakes. I definitely dare you to try it out and feel the wind in your hair...

Stanserhorn is open through the end of November. Check the webcam and reserve your time slot online. And the best comes last: the Stanserhorn is entirely covered by the Swiss Travel Pass.

The farmer cable cars in Engelberg

Still today, many farmers live in remote areas of the Swiss Alps that are out of reach for cars. And if there is a road leading up to their chalets or dairy farms, the quickest way to civilization might just be across a deep valley.

Farmers in Engelberg are especially known for their makeshift cable cars. The cabins are often made of wood and hang on a steel cable. Whether used to transport rations, cheese loaves, or children on the way to school, these farmer cable cars should be considered a cultural treasure.

We once had the chance to ride in a "Buiräbähnli" in the Uri Alps. It’s an experience I will never forget! Engelberg offers the Buiräbähnli Safari to the public, a multi-day hike involving overnight stays with farmers, and several crossings in farmer cable cars...

How to ride cable cars in Switzerland on a budget

The smoothest option will be the Swiss Travel Pass, an all-in-one ticket offering discounts for all the cable cars on this list (except for the farmer cable cars).

Another option would be to make Lucerne your base for a few days. The TellPass includes several top cable cars at no additional charge: Pilatus, Titlis, and Stanserhorn. In addition, you will enjoy lots of other discounts on funiculars and mountain railways in central Switzerland. 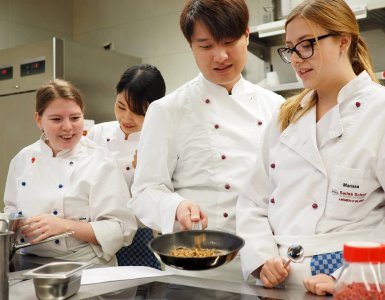 A remnant of the Phänomena science exhibit, the Kugelbrunnen (“ball fountain”) has been quietly rotating at Zürichhorn since 1984... Wind in the hair and sun in the face on Mt. Stanserhorn

A cabin with an open upper deck: The Stanserhorn Cablecar near Lucerne operates the world’s first topless cable car...

A dozen ways to travel the world in Ticino, Switzerland

Manage Cookie Consent
To provide the best experience, we use technologies like cookies to store and/or access device information. Consenting to these technologies will allow us to process data such as browsing behavior or unique IDs on this site. Not consenting or withdrawing consent may adversely affect certain features and functions.
Manage options Manage services Manage vendors Read more about these purposes
View Preferences
{title} {title} {title}
2K Shares
Share2K
Tweet8
Share
Pin317
WhatsApp