The Gstaad Palace Hotel is a Mansion in the Clouds Liz Taylor, Roger Moore, Michael Jackson and Princess Diana: The list of celebrities who have stayed at five-star Hotel Gstaad Palace is long.

Frankly, I have not reached celeb status just yet. But I sure felt like an A-list star when I recently spent an entire weekend there. Gstaad is not a new place for me. In 2014, I had my first opportunity to visit, and I fell in love. With my second trip, Gstaad will be top of mind for a long time to come whenever I am asked about my favorite holiday destination...

My husband and I arrive in Gstaad on a Sunday morning when the Bernese Oberland is still waking up. And there it is, the majestic Gstaad Palace, staring down at us like the gods would from the heavens above. And we were exactly going to go there - heaven. 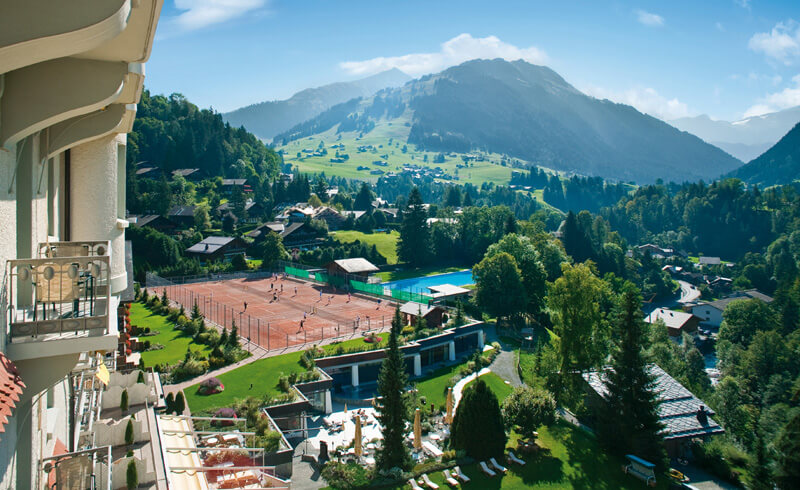 Everything is majestic about the Gstaad Palace

From the minute we step in, we feel like we are relatives of the good gods themselves. This is no exaggeration, considering how the guests are looked after and catered to at this hotel. Then, an unexpected thing happens: We are handed the key to the Junior Suite on the seventh floor! We are starting to feel like gods ourselves.

The view from the top of the hotel is mesmerizing. In our majestic suite, there is a sense of calm, a sense of separation from all worries, and yet a feeling of oneness with the world.

The benefit of being a journalist in a five-star hotel is that I can go behind the scenes. I am meeting key people who introduce me to the hotel’s glamorous history – and even share some of the secret in-house desserts. After long days of spending time at the hotel and exploring Gstaad, we wine and dine our evenings to shameless decadence. Our gracious hosts, Junior and Senior Scherz, are the scions of the empire. They even take time off to meet us, so I grab the opportunity to have a tête-à-tête and find out more from the men of this mansion.

Andrea Scherz is the owner and general manager of Gstaad Palace

After a delectable experience baking the Swiss Nidelkuchen cake with Chef Thomas Sporrer, we head off to meet Mr. Andrea Scherz. The owner and son of Ernst Andrea Scherz is the man who created history with the hotel. Much to my surprise, the young Mr. Scherz was an affable man. After all, if you were born into a destiny such as his, there had to be an inkling of arrogance somewhere. I saw none. As we get comfortable with our pre-dinner apéros, Mr. Scherz shares some life moments and tells me about his love for music and his ability to stay calm during challenging times. He is a member of the executive board of the Leading Hotels of the World, a role that come with the privilege of traveling around the world.

Asked about whether he compares notes and brings home ideas from other hotels, he tells me: "I observe how other hotels do business. At the same time, I do not get upset if the service is bad or if something did not arrive in time - especially when I am on holidays. After all, I went there to enjoy my holidays and do not want to be affected by small inconveniences."

Interestingly, Mr. Scherz once stole a napkin at one of his competitor's hotels. On that incident, he said "I actually did it! The napkin was paper but looked like fabric and was robust, so I wanted to see if we could replicate it."

When asked about his favorite holiday destination, he says that "the Royal Palm in Mauritius is definitely my favorite. The food is fantastic and the weather is superb - just the two things I need for a week or two before getting back to the grind."

Gstaad is used to celebrity stardom

Calling a palace your home obviously means spending time with the "Who's who" of the world. And Mr. Scherz has had his share of memorable encounters. One such was with the Iron Lady, Margeret Thatcher. He tells me that "Lady Thatcher came there to write her memoirs, and she stayed nearly the whole summer. When someone stays that long, you get to know them personally."

"One day, her security personnel came to me asking if I could organize a flight to the Matterhorn for that afternoon. I made a few calls and managed to organize the flight for her. When she got onto the flight, I wished her a nice trip. Suddenly she said to me ’Where are you going Mr. Scherz? You are coming with us!"

Not doubting for a minute his love for the hotel business, I still want to know if there is something else he would have loved to do. “Oh yes, work as an interior design architect,” Scherz responds instantly. "I also love music and have created a music compilation with our in-house DJ, Jim Leblanc."

As we finish our drinks, my husband and I are invited to test the famous Gildo's Ristorante for an evening of fantastic food and wine. It is good to be a journalist! 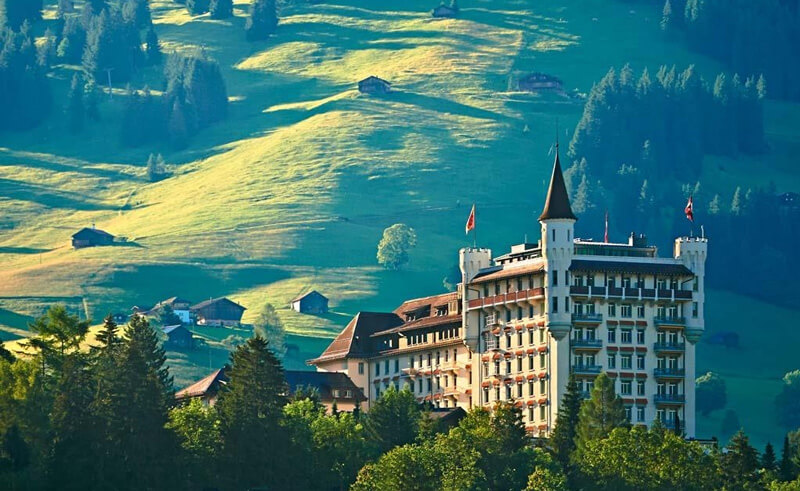 Ernst Andrea Scherz is a father and mentor

In testing times and victorious times, Senior Scherz has seen it all. But if at all, time has only given him more energy, almost as if he has just had the elixir of life in a gold plaited goblet.

He has recently been honored with the title of Living Legend by the Leading Hotels of the World organization for his exceptional contribution to the hotel industry.

Senior Scherz speaks to me about the Eagle's Club, his conversation with Michael Jackson, and, of course, his son Andrea Scherz and the grandchildren. Regarding the hotel industry, he believes that it is a prestigious job. ("If future generations of the Scherz family were to take over the business, they ought to be ‘darn good’ at what they do.") He explains: "This is the same attitude with which my son runs the business, and I think he does a great job."

An encounter with Michael Jackson

Recollecting an interesting experience with the King of Pop, Michael Jackson, Mr. Scherz tells me that "Michael was staying at Liz Taylor’s house, and our manager Hansruedi Scharer was looking after his daily needs."

"Hansruedi came to me one day and told me that Michael was interested in buying a house, and I was selling mine at that time. I told Michael that he could have it if the other interested party would not stake their claim."

"Unfortunately, the other party did buy the house so I had to share the news with Michael. He just said Ok, I don’t need the house, but can I buy your hotel?’ When I asked him why he wanted to buy the hotel, and he simply said 'Because I like it!'" Mr. Scherz talks about the very exclusive Eagle’s Club and the qualifications to gain entry into the coterie. I am expecting to hear about fat bank accounts, influence, status and other such adjectives, but he simply states: "Just a nice guy! Money is important, yes, but to an extent. We do not want brags in the club. We did oust a few members who were too pompous for our liking." 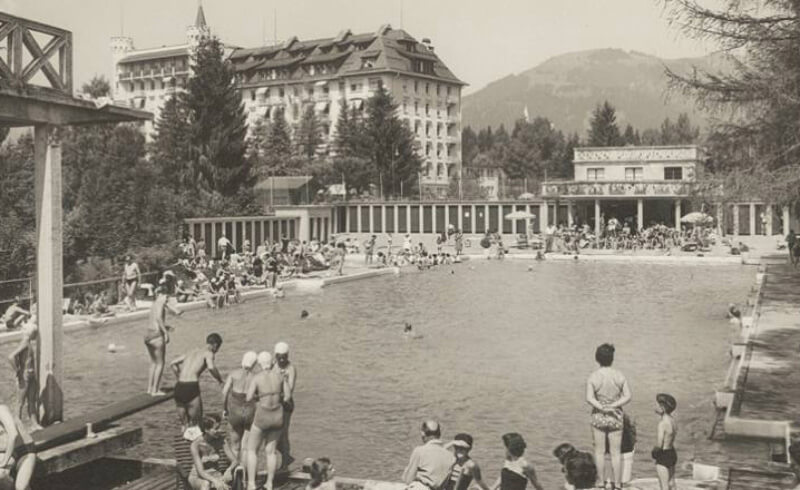 Being a renowned name in the hotel industry, Mr. Scherz has a few good hotels he likes to visit when traveling. For skiing, he loves the Zurserhof Hotel in Zurs, Austria. And for a sea side getaway, Hotel Cala di Volpe, in Porto Cervo, Italy.

Yoga in the Mountains

Those who want to maximize their day in Gstaad could do hot-air ballooning, have brunch, try e-biking, and finish the day by indulging in a sumptuous dinner.

This June, Gstaad Palace introduces Yoga in the Mountains for the first time. The event runs over a period of five days, during which guests would learn and benefit from three types of yoga – vinyasa yoga, pranayama kriya yoga and gong meditation. For more information, contact the Gstaad Palace. 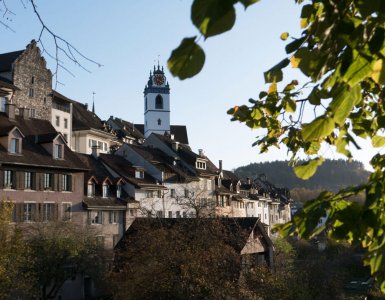 Every country seems to have a stereotype. Be it a state or a region that's the butt of the rest of the country’s jokes. In Switzerland, it is Aargau... How to Save up to 8 Percent on Souvenirs

With currency exchange rates the way they are, who doesn't want to save a few Francs these days? It is especially painful for tourist to load up on expensive Swiss souvenirs, so we put together a guide to help you save...

If you’re an expat in Switzerland and you love documentaries, Tintin, music and ice-cream, you should plan a visit to the pretty lakeside town of Nyon – located in Canton Vaud and only 25 km north-east of Geneva. Known...

Manage Cookie Consent
To provide the best experience, we use technologies like cookies to store and/or access device information. Consenting to these technologies will allow us to process data such as browsing behavior or unique IDs on this site. Not consenting or withdrawing consent may adversely affect certain features and functions.
Manage options Manage services Manage vendors Read more about these purposes
View Preferences
{title} {title} {title}
229 Shares
Share211
Tweet
Share3
Pin15
WhatsApp