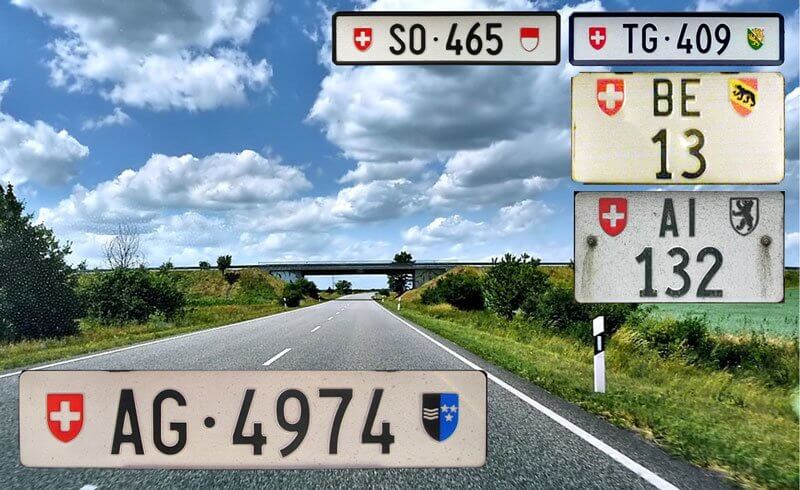 What do BS, VD, and AI have in common? If you're not from Switzerland, you might be trying to imagine a crazy story featuring humanistic robots and sex scandals, but the story is actually more interesting than that.

BS, VD, and AI are three of the twenty-six two letter shorts on Swiss license plates. Unlike in Germany and Austria where each larger city gets its letters on the plates, in Switzerland each canton has a two letter short. They are all listed below in case you want to play license play bingo next time you are traveling across the country... Or maybe you just want to be able to correctly identify the origin of that terrible driver who just cut you off!

I'm just saying, but the first two letters for that car were probably "ZH". Since I have just started the stereotype game, that car in the middle of a mountain pasture - probably an "AG"!

Another interesting thing with Swiss license plates is the numbering. Unlike in the US, UK, Canada and other countries where there is a series of numbers and letters which can be personalized, Swiss plates are sequential and represent the number of cars a canton has registered.

You can have a license plate like "TI 1" or "AR 100". Of course these low numbered, easy-to-memorize plates are the dream of many proud car owners. Once available for bidding, these plates can rake in funds for the appropriate canton which are almost unheard of.

Knowing that many people want to have a low numbered license plate has become a good business for the cantons wishing to increase their incomes and offset budget deficits. With this in mind, the Canton of St. Gallen repossessed the numbers "SG 1" to "SG 20" from the city of St. Gallen's fire department in order to auction them off. Though you might think that this has to be a record, the same amount was paid for "TI 10" in November 2011. That is a lot of money to simply register your car.

Once a license plate is in someone's possession, they can forever keep and transfer it to other vehicles. In fact, you can even have two cars registered to the same number (both cannot be on the road at the same time). If you are a collector of vintage cars (over 30 years old), you can register up to 99 cars to one number!

A notable exception to the rule is Geneva, where new plates are always made and old ones are not typically reissued. Of course, there is also another way of getting a low number. Swiss plates have different colors, and each color has its own sequential numbering. You could get a backhoe (blue) and try and get "ZH 7", for instance.

Here are the shorts: Manage Cookie Consent
To provide the best experience, we use technologies like cookies to store and/or access device information. Consenting to these technologies will allow us to process data such as browsing behavior or unique IDs on this site. Not consenting or withdrawing consent may adversely affect certain features and functions.
Manage options Manage services Manage vendors Read more about these purposes
View Preferences
{title} {title} {title}
118 Shares
Share117
Tweet1
Share
Pin
WhatsApp