Fondation Beyeler is a museum known for epic and often unique art exhibitions.

Located in Riehen just outside of Basel, the museum has an inviting atmosphere - inside and out. The building housing the art collection was designed by Renzo Piano, a world renowned architect. It features grand windows overlooking the gardens, the trees and the nearby hills. It really is one of my favorite places to find inspiration.

But these days, all the buzz is about the new exhibit going on behind those glass windows: Paul Gauguin. All over Switzerland, eye catching billboards and posters show a colorful masterpiece by this French painter. The particular artwork was reportedly sold for USD 300 million, making it the world's most expensive painting.

No wonder everyone is calling this a "must see" exhibit.

Paul Gauguin - A Voyager of the Seas

At the end of the 19th century, Paul Gauguin became famous for his colorful paintings inspired by the culture of Tahiti in French Polynesia. Possibly paying homage to Gauguin as a voyager, Fondation Beyeler has collaborated with leading international museums and private collections from around the world for the latest exhibit.

In the more than six years it took to put together the Paul Gauguin exhibit, the museum's curators have summoned over 50 masterpieces from thirteen different countries. In the museum's own words, Paul Gauguin is "the most elaborate exhibition project in the Fondation Beyeler's history." What fascinates me in particular is Gauguin's biography. At the age of 35, he decided to leave behind his past as a stockbroker and insurance agent in order to become a professional painter. He not only showed courage but was adventurous when he ventured away from Paris in search of undiscovered landscapes.

The constant pursuit of freedom and happiness is reflected in Gauguin's art - and in his writing. "Noa Noa" is his autobiographical account of the time in Tahiti, parts of which were read by Hollywood actor Keanu Reeves during the opening ceremony.

Meeting the Artist Up Close and Personal

As I enter the exhibit, I look straight at a self-portrait of Paul Gauguin holding his palette. It is quite impressive that the original palette is being displayed right next to the portrait. At the time of this painting, Gauguin was disappointed at his fellow Parisians by the reactions he got about his art from Tahiti. It is the last self-portrait he produced before leaving Europe for good. At nearly four meters width, the most important painting loaned to the exhibit is one that rarely travels: "Where Do We Come From? What Are We? Where Are We Going?" The monumental artwork is about the stages in the human spirit's search for the meaning of life: The baby on the right represents birth while the woman on the left represents old age. Another highlight is "Nafea Faa Ipoipo" ("When Will You Marry?"), the much talked about painting from the billboards. Since it was recently acquired by an undisclosed buyer, this is our last chance to see it before it disappears into a private collection. Although Paul Gauguin is well known for his great paintings, one should not forget that he also created wooden sculptures and ceramics. Some rare pieces of art were added to the exhibit and should not be missed.

After the many colorful paintings of faraway lands, I reach the final room. In this interactive space, Gauguin's quotes and journeys, his private life and his body of work are featured along the walls. 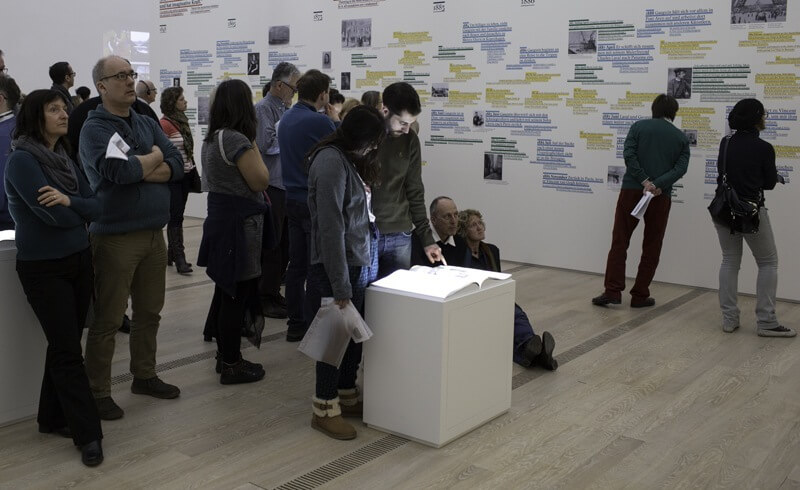 A large map depicts Gauguin's voyages throughout the years. It was a restless life of traveling between the cultures of Europe and the South Pacific. Several interactive books create a sound carpet throughout the area. Museum visitors can experience elements of Gauguin's biography virtually by touching specific elements of a physical book and by flipping through the pages. 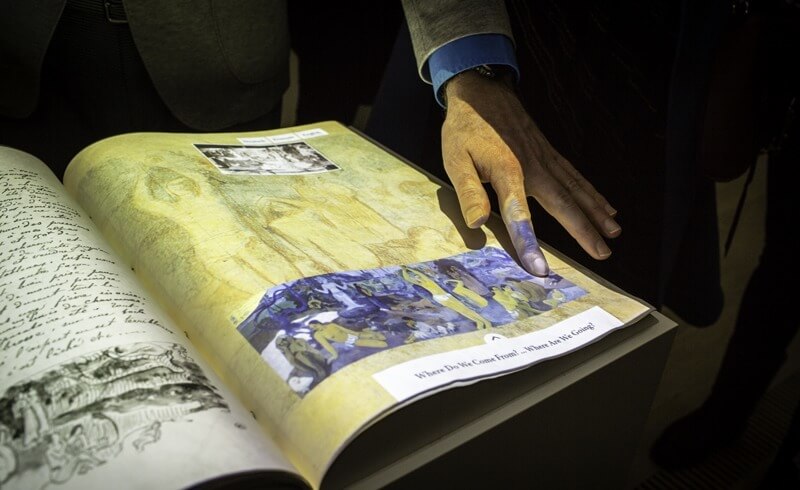 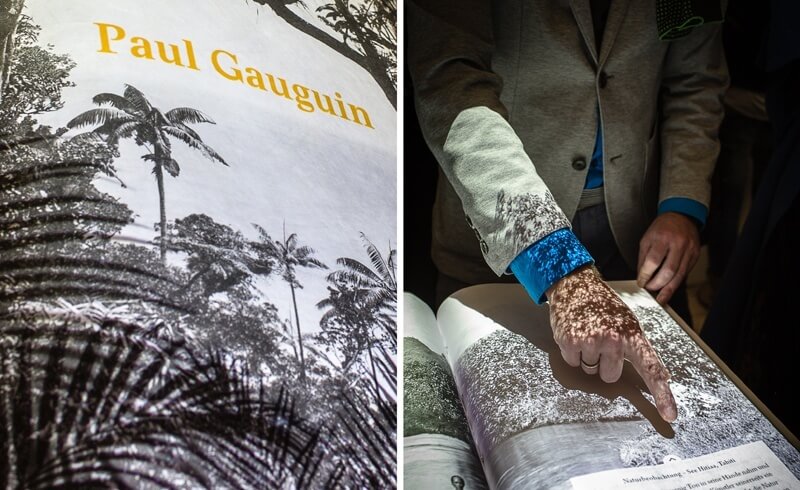 Listening to the Sounds of Gauguin

The idea behind the #GauguinSounds project is that images and sounds can interact with one another, creating specific feelings, moods and memories.

Famous personalities and museum visitors have pre-selected music to go with Gauguin's artwork. These curated playlists on Spotify allow us to create new connections with the art. Hiding at the end of the exhibition is a projection of photos from Instagram. This installation adds yet another virtual dimension as it encourages visitors to share pictures of their personal paradise tagged as #MyParadise. Fondation Beyeler is obviously trying to reach not only museum visitors, but also those on the outside. The multimedia room was designed by iART as a way of contributing to the visitor experience. Today's world of touchscreens, animations and interactivity poses quite a contrast to the 19th century paintings in the first part of the exhibit, however.

As for me, it was a fascinating journey from first seeing the exhibit's posters in Basel to standing in front of the world's most expensive painting. But I must admit that the interactive space was my favorite part because it was unpredictable, fun and full of color. The storytelling elements, sounds and animations allowed me to explore Paul Gauguin's biography in another dimension.

No doubt, this is an exhibit well worth visiting! 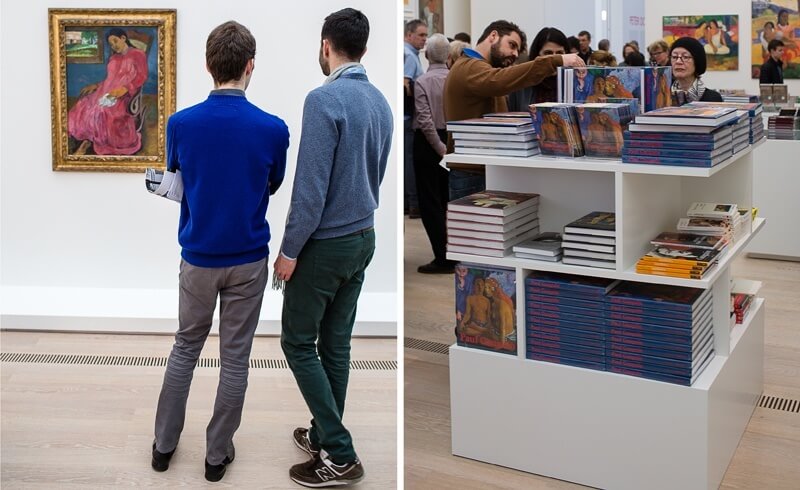 Impressions from my Basel Photo Walk

One of the great joys of living in Basel is walking along the Rhine early on a sunny Saturday morning. Being a photo junkie, I did a Basel photo walk... 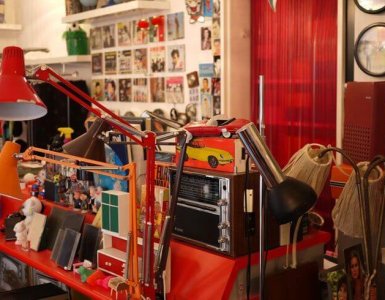 Your friends have announced a visit, and you're thinking: "Need to clean my apartment!" That's a clear sign that you're becoming Swiss...

Manage Cookie Consent
To provide the best experience, we use technologies like cookies to store and/or access device information. Consenting to these technologies will allow us to process data such as browsing behavior or unique IDs on this site. Not consenting or withdrawing consent may adversely affect certain features and functions.
Manage options Manage services Manage vendors Read more about these purposes
View Preferences
{title} {title} {title}
185 Shares
Share148
Tweet24
Share7
Pin6
WhatsApp