“Light Ragaz” is a light show in the legendary Tamina Gorge The rock walls of the mighty Tamina Gorge extend up to 200 meters in the air. They are a wonder in their own right.

Add to this that the dark gorge is also claustrophobically narrow and the River Tamina rampages through it, and you have the perfect spectacle - almost. Because through September, the fearful show is also lit up with moving animations at night! We have stayed in Bad Ragaz and have seen it with our own eyes: the play of light is truly breathtaking.

During summer nights, the Tamina Gorge is nearly pitch black. Here and there, through clefts in the rock, a bit of stray light still penetrates all the way down to the Tamina. With a deafening roar, the river carves its way through the soft sandstone day and night.

For instance, here's an impressive rock cleft in the Tamina Gorge: Tonight, the wind blasts through the gorge as well, so we can hardly hear each other speak. Water drips on my head and onto the camera from above. I pull up my collar and squint: am I imagining things or are those the telltales of the legendary dragon that supposedly resides here?

The monks in the nearby Pfäfers Benedictine monastery feared the monster well into the 13th century. Back then, the steam would already billow fearsomely from the entrance to the gorge. In 1242, some brave bird catchers found the hot spring, and there was no dragon to be seen. The surprisingly hot water pours in huge wafts of mist onto the cold rock of the Tamina Gorge, producing endless amounts of steam.

The Tamina hot spring is referred to as an "acratotherm" - a pure, warm spring with light mineral content. The water comes from the watershed of the Tödi River, seeps along the crystalline rock layers and, about ten years later, emerges in the Tamina Gorge at a constant temperature of 36.5 degrees C.

...to a wellness and medical resort.

This water temperature is ideal for bathing. No wonder that starting in 1382, the first baths were constructed. At the time, the hot spring was difficult to access and bathgoers actually had to be rappelled in breakneck fashion down into the gorge. They sure spared no effort to soak in those healing waters.

In 1535, the famous doctor and naturalist, Paracelsus, vouched for the healing qualities of the thermal water and praised its "virtue, power, and effect". Some 300 years later, as people demanded more comfort, the bathers no longer were willing to risk life and limb for the precious water.

Finally, on May 31, 1840, they inaugurated a four kilometer long water main from the Tamina Gorge to the Grand Resort Bad Ragaz. This is why you and I can now splash around in the salubrious hot water without an effort.

We reach the Tamina Gorge by postal bus.

Since I do not feel like making the roughly one-hour hike from Bad Ragaz to the thermal spring, I hop onto a yellow post bus. The mountain road with the steep downgrade may be brutally narrow, but the bus drivers have a legendary knack for driving it.

Somehow, they make it through the tight curves along the four kilometer long road, hugging the rocky cliff to the Old Pfäfers Bath. If you are prone to vertigo, sit on the right side on the way up and close your eyes when the bus comes to the two or three nerve racking spots! After 20 minutes (that seem to last an eternity), we arrive at the turnaround in front of the Old Pfäfers Bath. Either before or after visiting the gorge, you are still welcome here today in the oldest baroque bath house in Switzerland. It is a fountain of hospitality in a wildly romantic location.

Walk a few steps toward the mountain and you will come to an entrance that leads into the mystical Tamina Gorge. The pedestrian tunnel which leads you inside the rock was built in 1987. As you go along, you learn at several information stops about the discovery of the thermal spring. Also, magical fire, water, air and earth sprites start to show up on the rocks. During "Light Ragaz", the Tamina Gorge is a spectacle of light

Past the small thermal water well, you will step out into the spring water grotto and the Tamina Gorge experience. The narrow rock passage from here extends another 750 meters and is 70 meters deep. The way back to the Old Pfäfers Bath will lead along a rocky path. This summer through September, the craggy rock walls are illuminated with moving images every night. This event is called "Light Ragaz", a projection a multimedia light shows onto the largest natural screen in the world. Using the latest technology and lots of light, Zürich's Projektil agency tells the tale of the mystical world of spring water and the power of the elements.

For a second show, the light artists use advanced projection techniques for 3D effects. With millimeter accuracy, they project images onto the structures and shapes of the Tamina Gorge's rough rock wall which extends up 80 meters. The theme of the 2018 "Light Ragaz" edition is called "Aquarell". It tells a fantastic story with powerful images on the nearly one kilometer long experience walk.

It is a tale of flowers, fables... In this Light Ragaz selfie, Katja and I turn into sprites, too! Be quick, because the colorful, animated light show in the Tamina Gorge is only running until September 30, 2018. All the information you need about opening hours, how to get there and ticket prices are posted on the Light Ragaz website. (Admission for the spring is 5 francs. No dogs allowed.) Walter Schaerer is the founder of travelmemo.com, a blog about affordable luxury travel. Based in Zurich, Switzerland, Walter has an extensive background in the travel industry and is a skilled photographer. In the house of a genius at Einsteinhaus in Bern

The streets of Bern’s Kramgasse are interlaced with fashion shops, bakeries and restaurants – all forming an unmistakable chain of colors and buzzing with activity... 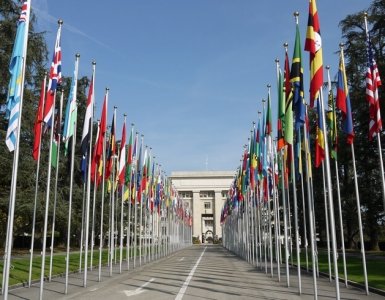 What to know about visiting the United Nations in Geneva

Due to their cultural and historical significance, the United Nations and the Palace of Nations are meaningful places to visit while in Geneva... Even more beautiful Swiss towns to see in your lifetime

It's in those smaller towns where Swiss identity is kept alive. Apart from flagship Swiss destinations such as Geneva, Montreux or Zürich, here are...

Manage Cookie Consent
To provide the best experience, we use technologies like cookies to store and/or access device information. Consenting to these technologies will allow us to process data such as browsing behavior or unique IDs on this site. Not consenting or withdrawing consent may adversely affect certain features and functions.
Manage options Manage services Manage vendors Read more about these purposes
View Preferences
{title} {title} {title}
70 Shares
Share53
Tweet6
Share
Pin11
WhatsApp