Being a rather small place, Ireland is not the first for many things. It has not been too often that I get the chance to say "we were the first country to..." - until now: In 2004, Ireland was the first country in the world to introduce a comprehensive nationwide ban on smoking in workplaces, bars, and restaurants.

Back in 2007, I remember a French client asking me for matches before a meeting. "Ah, sure. We don't smoke at work anymore around here," I replied, jovially. He smiled back: "Ah... hein... But we are French." - "Ah... We are Irish," I replied and pointed to the sign on every single meeting room door that warned of 2’000 Euro fines and court appearances.

So I felt like I was stepping back in time when I moved to Switzerland in 2012. In fact, with all this second-hand smoke for free, I have often wondered why people (particularly at train stations) will pay for cigarettes!

For an assertive nation that lobbies their government hard about issues that matter to them, it is a source of genuine puzzlement to me as to why many non-smokers in Switzerland (approximately 75%) are so "passive" about passive smoking. After all, direct democracy is an interesting feature of Swiss life. From what I can see, the Swiss don't hang about whining about politicians or complaining about their government. Instead, they form committees and actively lobby their representatives.

In the Swiss system of direct democracy, 100’000 signatures are required within a period of 18 months in order to launch a type of plebiscite or initiative. All Swiss citizens in every canton can then cast a vote on this initiative, such as the one on the smoking ban. If this initiative gets a majority’s vote, it moves on to the parliament. And if the parliament rejects it, the people can still challenge their decision with a referendum. Required are either 50'000 signatures or requests from at least eight cantons within a window of 100 days.

The initiative to ban smoking is going to be up for a vote on September 23, 2012. It requires that "all interior spaces are smoke-free, which is public or used as a workplace or is publicly accessible."

The initiative, in particular, seeks to "protect those working in the catering industry, e.g it would only allow for unmanned fumoirs..." (How there could really be such a thing as an unmanned fumoir, as after all the staff will have to go in to change the ashtrays?) 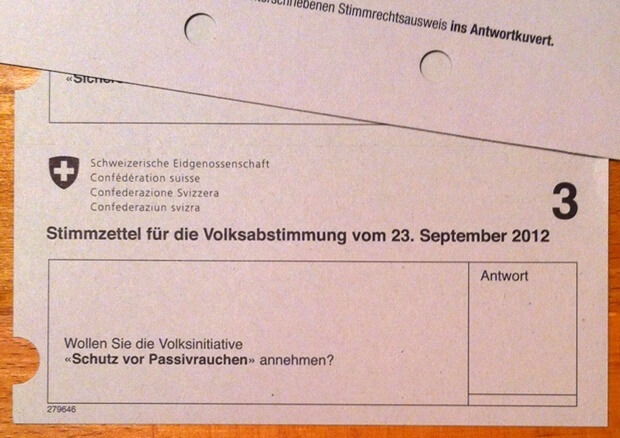 While this proposed change will benefit those working in the catering and service industry, it is not clear whether there is a loophole. If passed, this will allow smoking in "individual rooms" where no "third person" is affected by passive smoking.

This seems to contradict the part about no smoking being allowed in rooms that are "publicly accessible" (as even if a person is in an office on their own, well, surely it is publicly accessible?) What the legislation needs is, in fact, a ban on smoking in "enclosed spaces."

A poll by the Swiss Broadcasting Confederation showed that the Swiss are willing to vote "yes" for greater regulation on passive smoking. The parliament, however, has already indicated that they will reject this.

History of Passive Smoking Legislation in the 26 Swiss Cantons

In May 2010, the Swiss largely voted in favor of tighter legislation on passive smoking. But because of the federal structure, these changes were implemented unevenly across the 26 cantons.

Undoubtedly, there is a link between passive smoking and nasty side-effects: Cancer, asthma, or heart failure, to name a few. A particularly interesting fact is that ever since the cantons of Ticino and Grabünden introduced smoke-free restaurants in 2010, heart attack admissions to hospitals have fallen by 20%. In the canton of Lucerne, where no similar changes took place, the numbers slightly increased.

If you are able to vote on September 23, 2012, consider the benefits of tighter regulations on smoking. It is my belief that Switzerland needs to enjoy and cherish its alpine air, not make moves to protect the tobacco industry. After all, smoking is optional, breathing is not.

What do you think about this initiative? Today is a historical day in a country where women only just received voting rights on a national level in 1971! Switzerland's parliament has voted a new minister into office, giving the cabinet a female majority for...