If Zürich had a central park, it would be Platzspitz.

Located adjacent to the main station on a triangular peninsula lies one of Zürich's oldest public parks. When seen on a map, its peculiar shape stands out. But it is not exactly the shape which made Platzspitz the protagonist of a new book, Platzspitz - Insel im Strom der Zeit. Rather, it is the remarkable biography of this park, from Medieval shooting range to cattle pasture, from Baroque promenade for Zürich's elites to green island during the industrial revolution, and finally from drug ghetto to modern day leisure spot. Thanks to the park's history as a shooting range, Platzspitz has been exceptionally well documented.

The city of Zürich has commissioned this carefully crafted portrait, which turns out to be a treasure trove for anyone interested in Swiss history and urban planning. Vintage maps and postcards, archive photographs and lots of anecdotes about the Platzspitz park paint a rich picture of this often overlooked urban island. (As the title suggests, "Platzspitz is an island in the flow of time.")

For instance, who knew that Knabenschiessen, the city's September tradition, started in this very space in the mid 17th century? Also, it is at the park's veritable point where the Sihl and Limmat rivers converge ("Spitz") that Irish novelist James Joyce was most reminded of his home country. The darkest days of Platzspitz took place in 1991. After a five year gradual build-up, the park was now entirely occupied by drug addicts. They converged onto this once idyllic park next to the main train station from all over Switzerland - and Europe. The public was shocked, and media coverage of "Needle Park" went international.

How could it be possible that Zürich, one of the world's wealthiest cities, lost control over one its public parks?

After a mandate from the district council, the park was ultimately reclaimed on February 5, 1992. By then, the vegetation of bushes and green lawns had been destroyed by the ghetto-like circumstances. According to the authors, a system of holes had been dug near the base of trees in order to hurriedly hide any drugs during police raids. Park benches had long been removed, and architectural highlights such as the pavilion were almost unrecognizable. Today, the Platzspitz park has gone through a reinvention phase yet again. A new era has begun with the opening of the Swiss National Museum's futuristic extension building. On a personal note, I have grown to appreciate Zürich's central park only in the past few years. At the time when it was home to the drug scene, I was still a teenager. Later, Platzspitz was missing a USP for me, so I largely ignored it. But today, I love to stroll from the main station through the manicured park towards the river confluence.

When you Really Live in Zürich…

Just recently, this ingenious Tumblr blog called When you really live in Zürich popped up on our radar. This growing collection of... Running in Zürich in spring is a real treat. The air is crisp and starting to get warm and comfortable. The Zurich Marathon is a favorite event for... 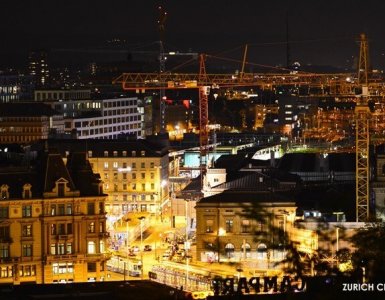 In the past few years, we have posted a number of time-lapse videos shot here in Switzerland. Naturally, most of them show amazing sunsets, night skies...

Manage Cookie Consent
To provide the best experience, we use technologies like cookies to store and/or access device information. Consenting to these technologies will allow us to process data such as browsing behavior or unique IDs on this site. Not consenting or withdrawing consent may adversely affect certain features and functions.
Manage options Manage services Manage vendors Read more about these purposes
View Preferences
{title} {title} {title}
4 Shares
Share
Tweet
Share4
Pin
WhatsApp