It's been several weeks since Art Basel packed up. And to be honest, it’s taken me about this long to process everything.

I was lucky enough to have a four-day press accreditation to Art Basel and the (confusingly named) Art Design Miami/Basel. It was a packed week of art, culture, and business, but I came away with some very strong feelings. Art Basel is the biggest event of the year for the art world, by which I mean the commercial art world: high-end galleries representing the most lucrative contemporary artists.

But while Art Basel is first and foremost an industry show, I am writing this retrospective with the general public in mind, rather than the collector or contemporary art aficionado. 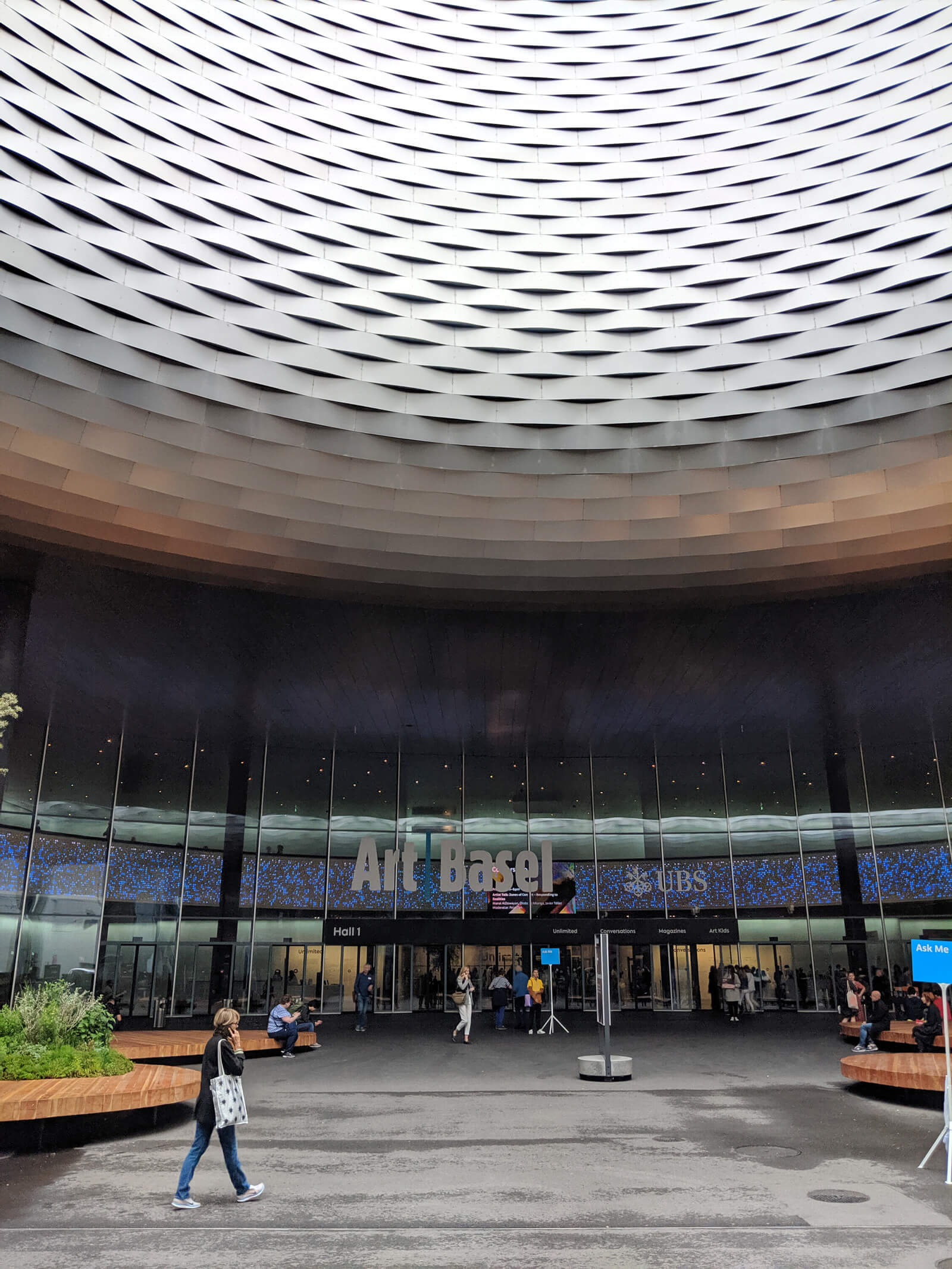 Inside Unlimited at Art Basel 2019

The show was broken up into various sections. There was a hall of gallery booths, the Parcours. Then a series of mini exhibits distributed around Basel. And finally Features, single artist shows spread throughout the gallery hall. While this is all open to the public, it is Unlimited, a curated extravaganza of monumental proportions, that is the main attraction for the public. 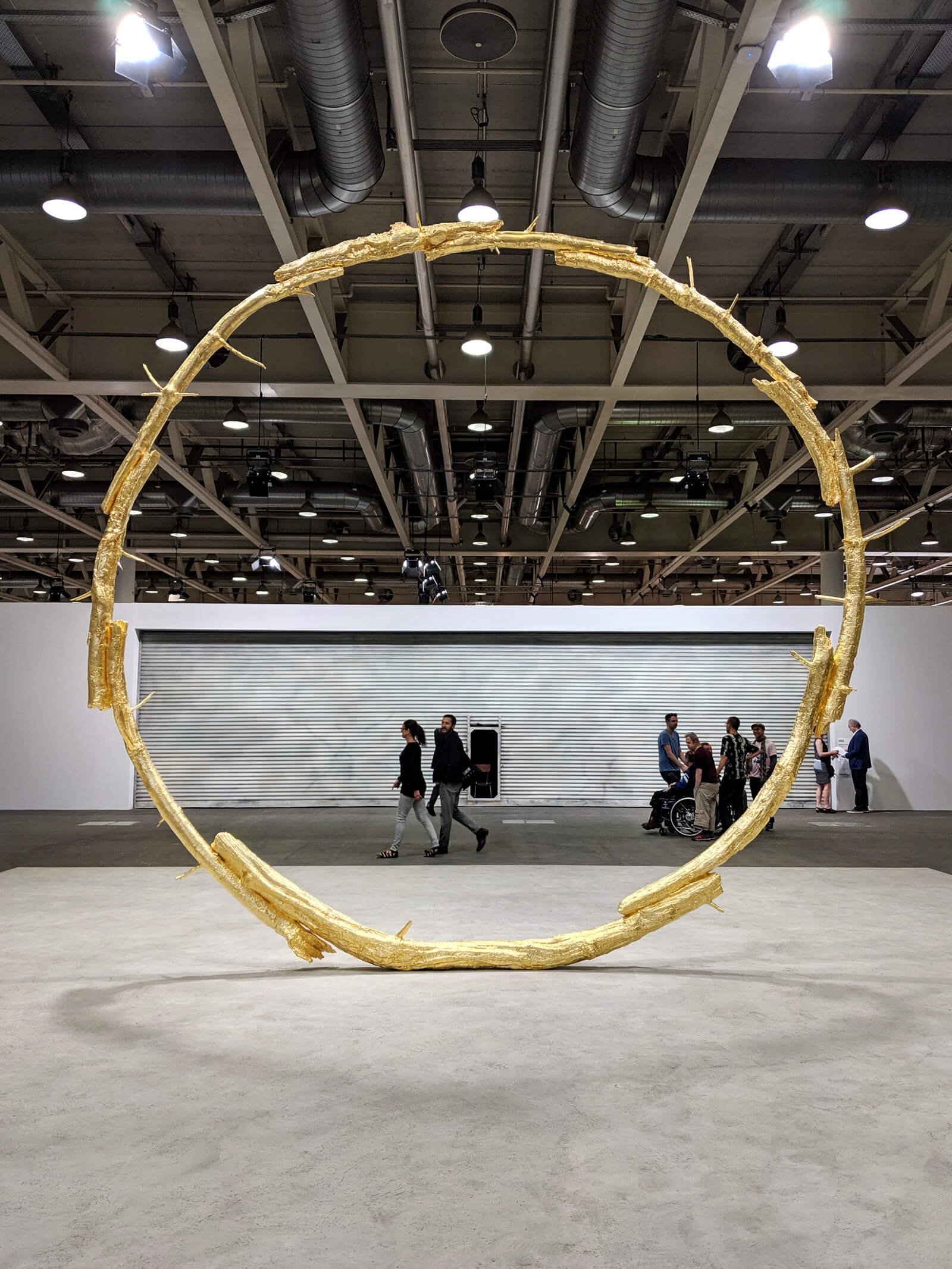 Unlimited, which takes up most of the Basel Messe’s main building, is huge, both in scale and scope, like a Biennale in an aircraft hangar. It features large scale works, installations, and sculptures. They employ a variety of techniques including video, robotics, and VR.

As with much contemporary art, many of the pieces lean towards the absurd in order to make a statement. But despite the scale and ambition, I was surprised at what I felt and saw in most of these statements while walking through Unlimited.

To be honest, they were largely predictable, uninspiring, and even boring, rather than surprising, shocking, or provocative.

Of course, one of the great things about art is that everyone gets something different from it. Works I found predictable others found provoking. One of the many works dealing with the interaction of nature and technology, entitled Aquila Non Capit Muscas by Mircea Cantor, showed a slow-motion video of a trained eagle knocking drones out of the sky.

As I watched, amused but uninspired, an older viewer next to me incredulously asked her friend, “why did that bird think a piece of metal was food?” Clearly, the comparative novelty of drone technology made this work more impactful to an older audience than it did to a younger one.

The question of new technology continues to be a major theme in new artworks, as it has for centuries. But since many of the artists represented here are themselves older, along with the collectors who purchase the works, there seemed to be a knowledge (or perhaps novelty?) gap underlining many of the works.

This question of a generational gap played in my mind as I walked over to one of the older works in Unlimited, a hyper-realistic set of wax figures from 1989, titled Lunchbreak by Duane Hanson. The piece was composed of three figures posed as American construction workers on their lunch break. The figures sit or lean, dirty and exhausted, around paint splattered scaffolding, eating tuna from cans and lighting up Marlboros.

Placed here in Basel, surrounded by phenomenally expensive art works and people, it felt a bit... cringy. Obviously, the intent of the piece, and the curator's choice to place it in Unlimited, was to get viewers to think about stark class differences.

As the catalogue text itself describes, “due to the current political climate, this work takes on a charged relevance in his uncannily realistic depiction of blue-collar workers, who are the ongoing subjects of much electoral and policy debate.”

While the statement itself is true, in 2019, the era of populism, #MeToo, and other societal and political shakeups, being placed there in Art Basel surrounded by expensive people and art works, it felt less thought provoking and more... inappropriate, color blind, or tone deaf.

One of the more democratic and powerful political pieces was Rivane Neuenschwander's "Bataille, 2017" which engaged with the audience’s personal politics by inviting them to pick relevant terms from contemporary political discourse and pin them up onto the wall: Speaking of #MeToo, one of the most impactful, timely, and thought-provoking works in the show was Open Secrets by Andrea Bowers. It portrayed, in striking monumental style, a red timeline of celebrities accused, though not necessarily convicted, of assault.

Unfortunately, the piece garnered criticism and backlash because the artist used personal pictures of one of the accusers without her permission. (Bowers agreed to remove the pictures for Unlimited.) While this piece was definitely more on the nose, more productive, and more challenging than the wax figures in Lunchbreak, unfortunately the impact of the piece was still blunted by this glaring blunder.

It seemed to me like these important contemporary issues were being addressed by both artists and curators who did not quite grasp the fullness of the cultural context, or truly see the whole picture. At best this hurts the authenticity and impact of the work, and at worst it taints the show with ignorance and elitism.

"Sorry, no pricing information for the press!"

These feelings continued when walking through Art Basel’s gallery hall. In one Berlin gallery’s booth, a woman and I were admiring a tapestry when she asked the attending gallerist about the price. He eyed me suspiciously and asked if we were together.

Upon hearing that we were not, he made an elaborate show of conspiratorially concealing his face as he whispered the price to her. “We don’t like the press to hear prices,” he said with a condescending glance in my direction. Unfortunately, I encountered this standoffish attitude throughout much of the gallery hall.

I'm not a luddite, nor am I one of those people trying to say that good art died in the 1880's.

To that end, I won't mention the astronomical prices of the artworks at the show, particularly in the Unlimited hall, because I think this is reductive and takes away from the aesthetic, artistic, and experiential takeaways of the general public. But for those who aren’t a regular part of the contemporary art world, I really do wonder the value of shows like this.

I know that I sound negative, but I was genuinely disappointed with the experience I had at Art Basel compared with my purely positive time at Design Miami/Basel and the concurrent Photo Basel, two very similar industry shows.

At these other two shows, the gallerists were friendly and talkative, excited to share their works and the artists they represented, even to people who were simply curious rather than experts or collectors. The main exhibition hall at Design Miami/Basel, their version of Unlimited, was right on the money, showing off cutting edge works that offered solutions to contemporary social and environmental issues.

Some of these suggestions could be taken as quite controversial, but importantly all were forward thinking and timely. This, of course, is exactly what spaces like Art Basel and Design Miami/Basel are for, one of the few places where constraints need not apply to artists. I found it curious and disappointing then that Unlimited so tied itself down with its awkwardness. 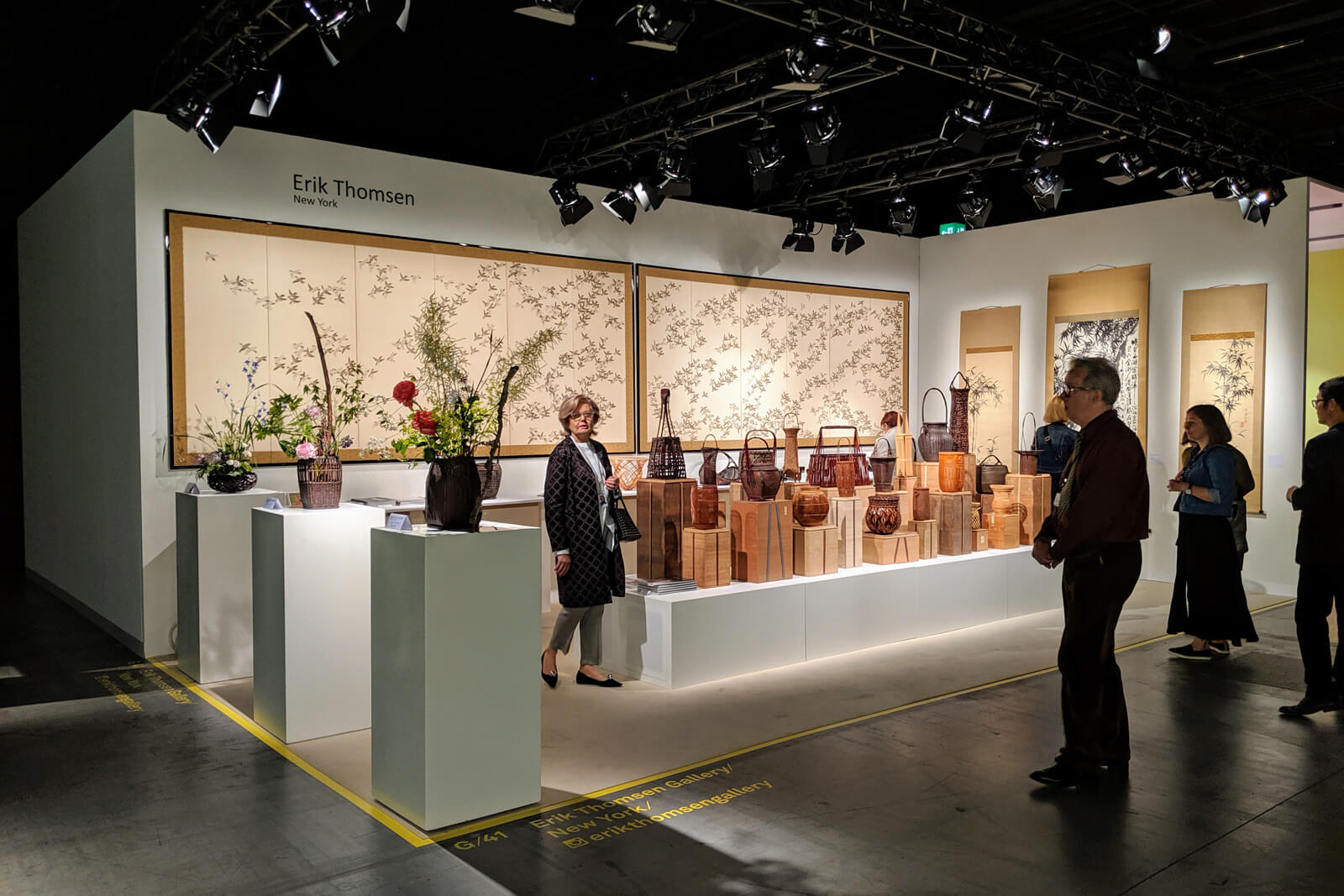 Some highlights from Art Basel 2019

This installation of huts, titled "Manimal," was designed by Brazilian group Mameulca Studios and presented by Mercado Moderna. They mimic the intricate nests constructed by weaver birds. Inside was a little sitting area, and an example of a real nest made by the birds from matching materials. Imagine the possibilities for nature-inspired affordable, sustainable shelter. 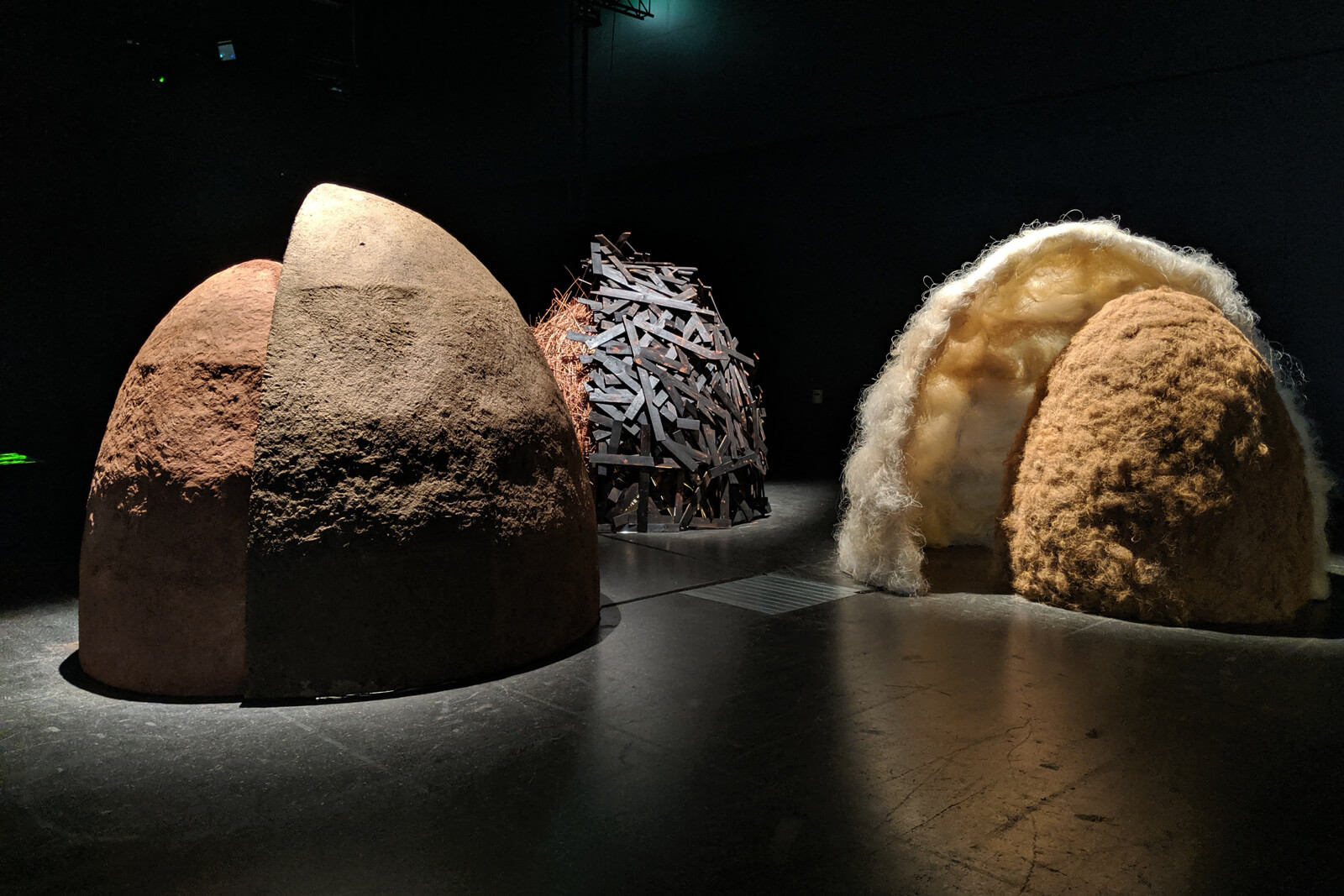 My favorite piece from the Design exhibition, "Magnus V" is an incredible sculptural piece by Irish designer Joseph Walsh. Constructed from Olive Ash wood, it was slowly shaped into a ribbon of polished wood that changes from every angle you look at. At a time when wood is again becoming popular as a renewable building material, this piece pushes the boundaries of what is possible. 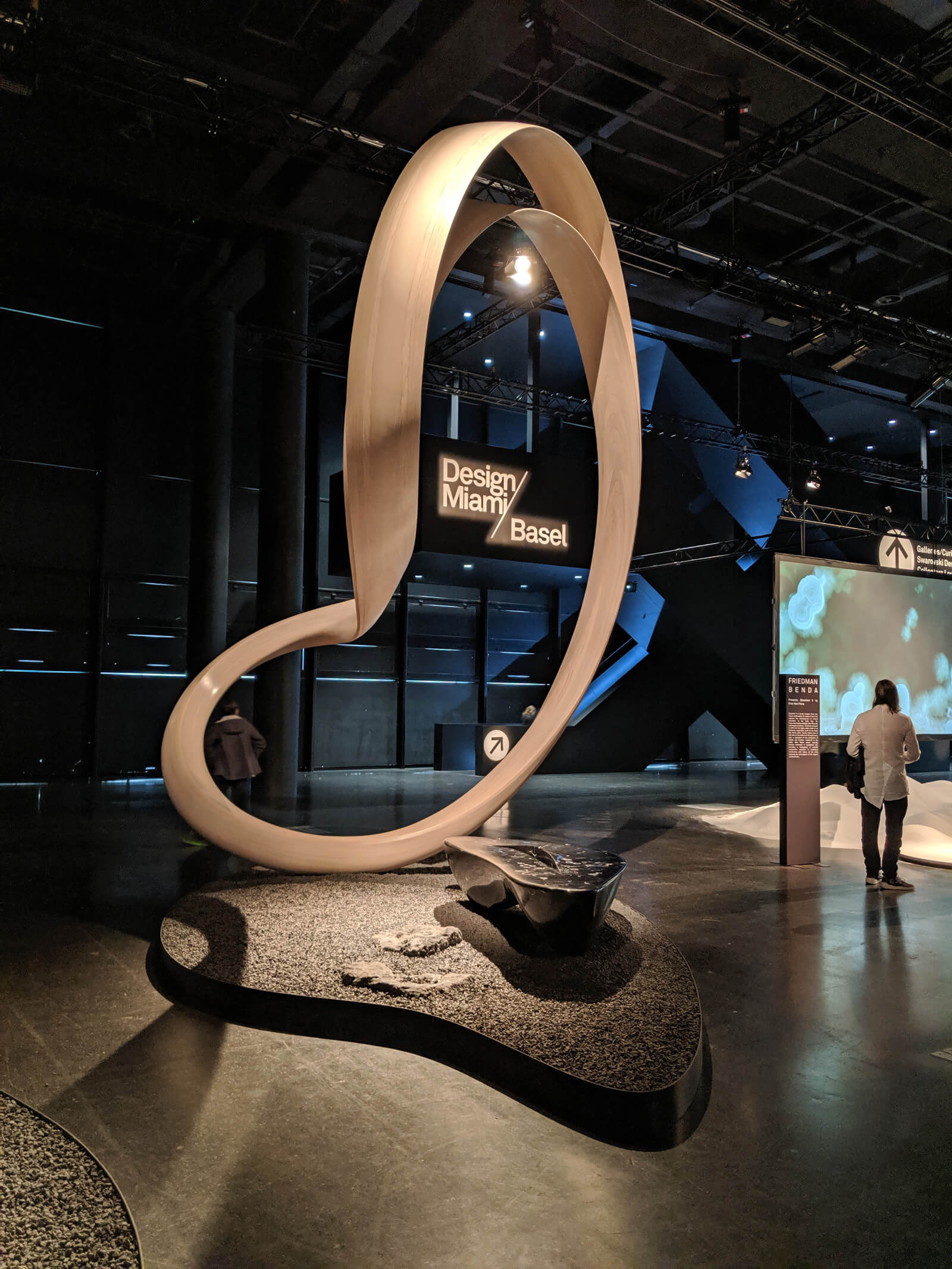 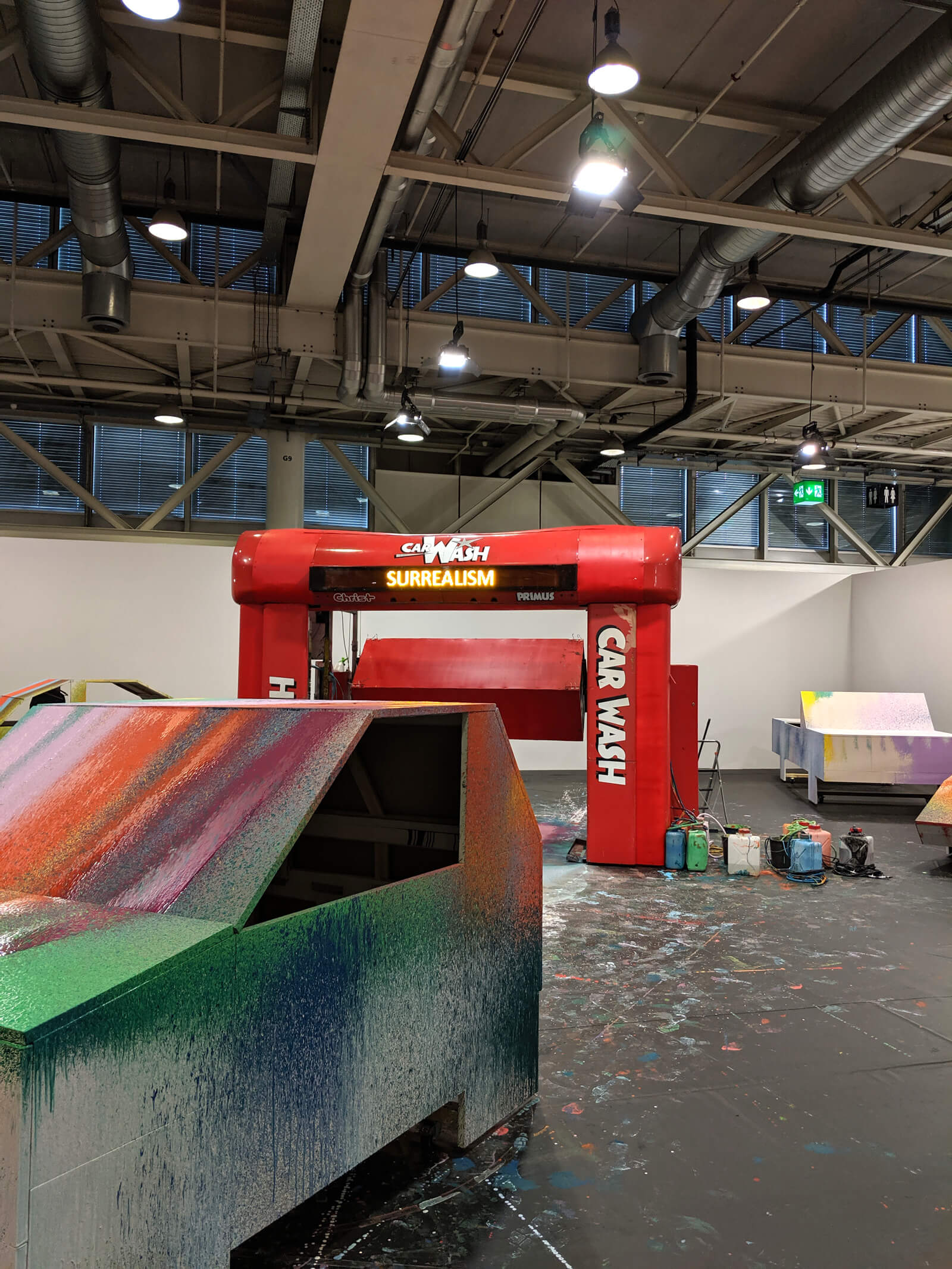 But even if Unlimited itself fell flat for me, I would still recommend Art Basel as a must-see for anyone who enjoys people watching, as it is quite the spectacle.

There are many stereotypes about the contemporary art world, and in my experience most of them are true. Go watch Velvet Buzzsaw on Netflix and you’ll get the idea. Art Basel is a safe(ish) space for the avant-garde, the unorthodox and the just plain strange.

Where else can you find floral bathrobes, Matrix cosplay, and un-ironic indoor sunglasses wearing? Or mechanized car washes flinging paint? Or giant inflatable sneakers? With the absurd, there is a fine line between the serious and the blasé that Art Basel boldly walks, with more or less success.

And for this at least, it's quite unlike anything else.