Twitter is one large public message forum. Striking up a conversation with most anyone is as easy as finding the Twitter handle and composing a message of 140 characters or less.

When it comes to the Swiss national icon Roger Federer, it could not be any easier. He is one of the world's top athletes who also happens to be top on social media. Thanks to his obvious passion for Twitter, @rogerfederer holds regular Q&A sessions with his 1.94m followers...

BFF 4EVER: Roger and Lindsey

One of these followers has a special status in Roger's Twitter rolodex: Lindsey Vonn. This American downhill skier and four time World Cup championship winner is also an avid social media geek.

Roger and Lindsey have a genuine friendship outside of the Twitterverse, too. They regularly attend each other's competitions and provide support during difficult times... So I am convinced that it was either chocolate or Lindsey who helped Roger Federer get over the recent Wimbledon loss - or a combination of both!

Downhill skiing, perhaps?!? The presumptuous hashtag for this challenge: #ChocolateHeaven Watch a recording of their recent Skype call and form your own opinion! What do you think the challenge may be all about?

A Tennis Match on the Jungfraujoch

It came as a big surprise to find Roger Federer's helicopter selfie the morning of the challenge reveal:

Rode in a helicopter today, so I obviously had to take a #selfie pic.twitter.com/x3E6fuqeHn

When the much talked about video was finally released, #ChocolateHeaven was no longer a mystery: As part of the opening of Lindt's chocolate store on top of Jungfraujoch, Federer challenged his friend Lindsey Vonn to a game of tennis! See for yourself:

Join the Conversation on Social Media

(Post sponsored by Lindt, but all thoughts are our own; square photograph via @NajwaAbuHaider) Capturing and sharing the history of St. Gallen in a visually engaging way is the main objective of the non-profit MEMORIA project... 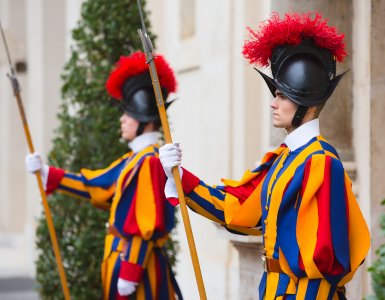 The papal guards have a long history in the Vatican. Here are some facts about the Swiss guards, the world's most colorful guards.

Manage Cookie Consent
To provide the best experience, we use technologies like cookies to store and/or access device information. Consenting to these technologies will allow us to process data such as browsing behavior or unique IDs on this site. Not consenting or withdrawing consent may adversely affect certain features and functions.
Manage options Manage services Manage vendors Read more about these purposes
View Preferences
{title} {title} {title}
32 Shares
Share24
Tweet8
Share
Pin
WhatsApp