Sainte-Croix is a remote town in the Jura highlands of canton Vaud. From its workshops, automatons for the world's aristocracies were manufactured. Think of these automated entertainment machines as the gadgets of the wealthy at the time.

In the past century, automaton manufacturing has become a lost art. Once the world's center for high precision machines, Sainte-Croix remains the perfect place to learn about music boxes and automatons. The Musée CIMA contains a large collection of music boxes from the town's rich past. And at least one man continues the lost art of automaton making.

What are automatons all about?

Inside each automaton, countess little gear wheels are perfectly tuned to animate everything from limbs to eyes and even eyebrows. During the height of automaton development at the end of the 18th century, some of the most complex scenes were created. Sainte-Croix automatons were the gadgets of the aristocracy.

The Musée CIMA in Sainte-Croix should be on the list of any robotics fan. On one hand, the International Center for Art Mechanics showcases the local tradition of manufacturing mechanical movements. There is a large collection of music boxes going back to their initial arrival in Sainte-Croix in 1811.

But it also has a unique collection of bird cages with singing birds, as well as automatons. Ranging from historic to modern (and futuristic), the exhibits will surely tease the imagination. For instance, this sci-fi angel by François Junod is considered a modern-day automaton:

Founded by three brothers in the business of music box repairs, Musée Baud is located in nearby Auberson. The small museum contains an extensive and fascinating collection manufactured between 1750 and 1940.

There are music boxes, automata, clocks, singing birds, animated pictures, and gramophones. You will not be able to miss Maesto, an orchestra playing no less than 10 different instruments. This piece from 1900 is a definitive highlight of Musée Baud.

In 1883, up to 1500 specialists used to manufacture music boxes and automatons in Sainte-Croix. Today, only a few remain. Mr. François Junod is one of the most well-known automaton makers who continues to practice this highly specialized skill.

An automaton restoration technician by trade, he is considered to be a wizard in the secretive field of automatons. "An automation is poetry, it's magic, it's telling a story," Mr. Junod describes his profession inside his Sainte-Croix workshop.

As such, each of his automaton machines can be programmed to do certain automated tasks. The scenes vary from a birdcage with tweeting birds to an automaton performing a magic trick.

Junod's aim is to remake the types of machines that were once considered most complex. The results are miniature plays, each offering a perfect unison of sculpture and mechanics.

Mr. Junod sells his so-called androids to all parts of the globe. In order to be as successful in his niche as he is, Mr. Junod has to wear several hats. On the one hand, he is an exceptional sculptor who can create even the most intricate characteristics.

On the other hand, Junod has to be something like a watchmaker or engineer as he assembles the tiniest parts to animate his objects. Carpentry is required for the set design. And finally, he has to be a tailor since he sews all the clothes for his creations. Alas, creating a single automaton can take years.

Wearing the hat of an artist, Junod has been adapting his profession to modern times. When these automatons appear in movies (and increasingly in real-life scenarios), we have another word for them: robots.

Robots are often brought to life through CG animation. Robotics research labs, on the other hand, show a preference for function over form. Mr. Junod might hold the key to developing human-like robots that the homo sapiens among us accept as friends rather than enemies.

The Boulangerie La Gourmandine is known far and wide for its delicacy: an irresistible almond cake. You will spot these cakes on display as you approach the bakery.

Wrapped in pink paper, Amandine de Sainte-Croix is an almond cake with hints of honey. Thanks to being flat and stackable, it is the perfect souvenir to take home - if it makes it that far!

How to get to Sainte-Croix

Despite its isolated location, Sainte-Croix can easily be reached by car or public transportation. The best way to travel to Sainte-Croix is by panoramic train from Yverdon-les-Bains (36 minutes).

Sainte-Croix is reachable by car from Lausanne (45 minutes), or from Yverdon-les-Bains (25 minutes). Parking can be found at various spots.

Copy/paste this Yverdon-les-Bains blueprint in 2023 Apart from cellophane, the invention of the zipper is a nice example of what happens when Swiss and Americans collaborate. But more on cellophane later. First patented in the United States in 1851, the "pre-zipper"... 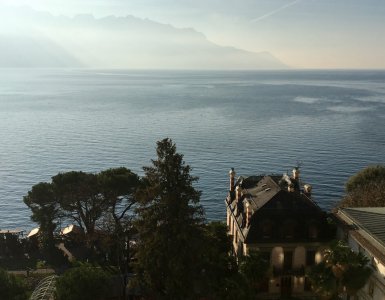 Nestled at one end of "croissant-shaped" Lake Geneva, Montreux is a glittering jewel of a town, and the ideal weekend escape during... What do Airbus, Nespresso and Apple computers have in common? They all use aluminum. Looking at how this metal is so ubiquitously used today, one probably finds it hard to believe that it used to be worth more than gold...

Manage Cookie Consent
To provide the best experience, we use technologies like cookies to store and/or access device information. Consenting to these technologies will allow us to process data such as browsing behavior or unique IDs on this site. Not consenting or withdrawing consent may adversely affect certain features and functions.
Manage options Manage services Manage vendors Read more about these purposes
View Preferences
{title} {title} {title}
14 Shares
Share12
Tweet2
Share
Pin
WhatsApp