Sunday Brunch at Quai 61 in Zürich During the excavation for the opera house parking garage, several artifacts from prehistoric times were unearthed: It turns out that pile dwellers had settled there with their typical houses built on stilts! Today, only one such building is still there along Lake Zürich: The Quai 61 restaurant.

The utopic building was constructed as part of the first ever At the time, there was even a temporary cable car across the lake, so it does not surprise that the building was set on dozens of stilts. It literally appears to be floating on Lake Zurich like a 1920’s ocean liner... Sunday Brunch at the Quai 61 Restaurant The maritime theme was extended to the restaurant's interior. On this Sunday morning, we have the pleasure to "boarding" Quai 61 in order to try their much talked about brunch... Seated in a cozy booth with perfect view of the city and the lake, we truly felt like traveling on a historic boat. The only moving objects were occasional boats docking outside, reminding us that we were still at the harbor in Zürich Enge. The Quai 61 restaurant is not like your usual brunch spot. Its unique atmosphere conjures up memories of a vacation in Florida's Key West - or of a fancy hotel somewhere on a Pacific island. While I am keeping the camera busy by capturing every detail of the decor, Mamiko is already scanning the brunch menu. Her eyes are locked on the pancakes, and her mouth verbalizes the following order: "A stack of pancakes with berry compote and maple syrup, bitte!" I am taking a few more minutes to study the brunch menu: Eggs in any imaginable way, shape or form.

I settle for a heavenly boiled egg... I did not regret ordering the Rustic Breakfast with a bread basket and jam, three kinds of cheese, air dried beef and ham. In terms of portion size, it is about the same as I would eat at a typical brunch buffet. The main benefit: No need to get up and fight over the buffet... For those who crave something a little more exotic, the Quai 61 Sunday brunch menu includes a Hangover Breakfast with optional Bloody Mary. Or a stunning Fisherman's Choice with smoked salmon on New York bagel (it is being served one booth over from us!). Chefs Timo Oberegger and Nils Osborn are best friends - at least outside the Quai 61 kitchen. The young duo has already traveled the world together, and their dishes are infused with culinary inspirations the world over. Still, we appreciate the fact that their kitchen uses mostly regional ingredients.

And as to Mamiko's pancakes? They were better than anything: Fluffy, rich and simply hearty. Do not miss ordering a stack when you visit.

Our advice: Make a reservation for a window booth ahead of time. Sunday brunches are popular among Zürchers, especially when they come with that ultimate ocean liner feeling... Walking down Bahnhofstrasse in Zurich or Luzern on a busy day of shopping can really work up an appetite. What do you get when you don’t want to sit down at a restaurant? Street food! 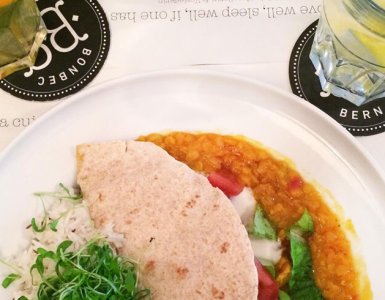 Bern’s culinary landscape embraces those who refrain from eating animal products. Let me take you on a tour of my favorite places for vegan food in Bern...