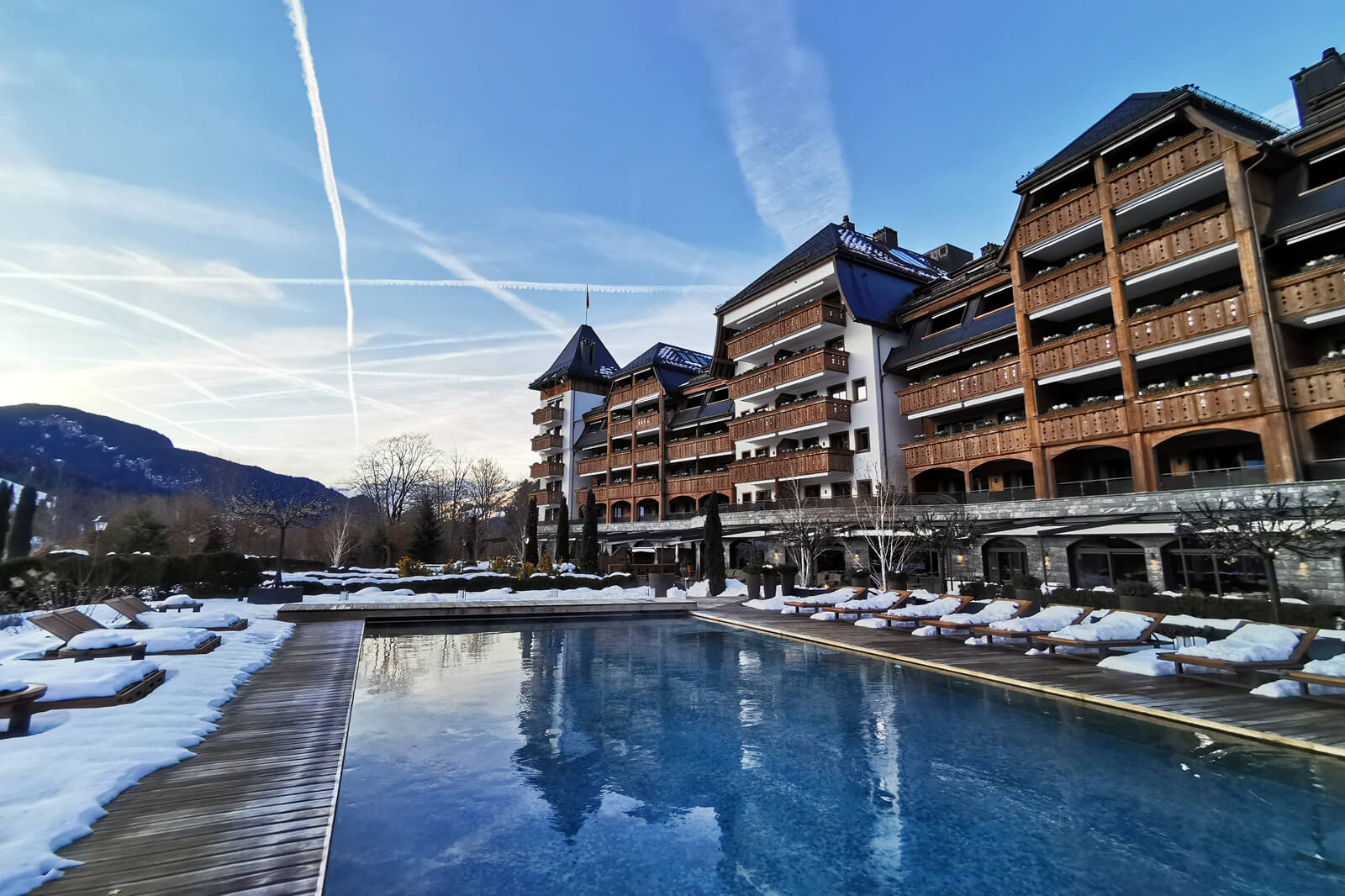 Gstaad is just a stone’s throw from the very birthplace of Swiss luxury hospitality, which started along Lake Geneva.

Before it turned into an upscale resort at the beginning of the 20th century, Gstaad used to be a farm town like many others. The misfortune of the great fire of 1898 was turned into an opportunity, however, and Gstaad was rebuilt with the growing tourism industry in mind.

Now accessible by railroad, Gstaad soon became the home of several luxury palaces that would cater to wealthy travelers. And for more than a century, the five-star hotels of Gstaad have remained unchanged - until a new player joined the party in 2012.

As is usual before checking into any hotel, I have done my research about The Alpina Gstaad. I found an overwhelming number of reviewers, from travelers to bloggers or journalists, who have praised the hotel and have called it their ultimate hotel experience.

Nowhere did I read that the hotel sends for its guests at the station with a Tesla Model X! Can you imagine my surprise when the concierge lifted the doors of the hotel’s own electric car? We’re off to a good start... As the Alpina Gstaad was opened only recently, it had to comply with the local building code. Unlike the other hotels that resemble historic palaces, The Alpina Gstaad uses elements of the traditional Simmentaler architecture. Centuries old local fir wood and stone elements throughout are a constant reminder of where I am: amid an idyllic mountainscape between Zweisimmen and Montreux.

It's all about textures.

Our junior suite, one of only 56 rooms in total, is larger than anything we have seen. The entrance leads into a sitting area with a bouquet of fresh flowers waiting on a table. Also, there is a cleverly disguised mini bar inside a hand-painted historic chest. 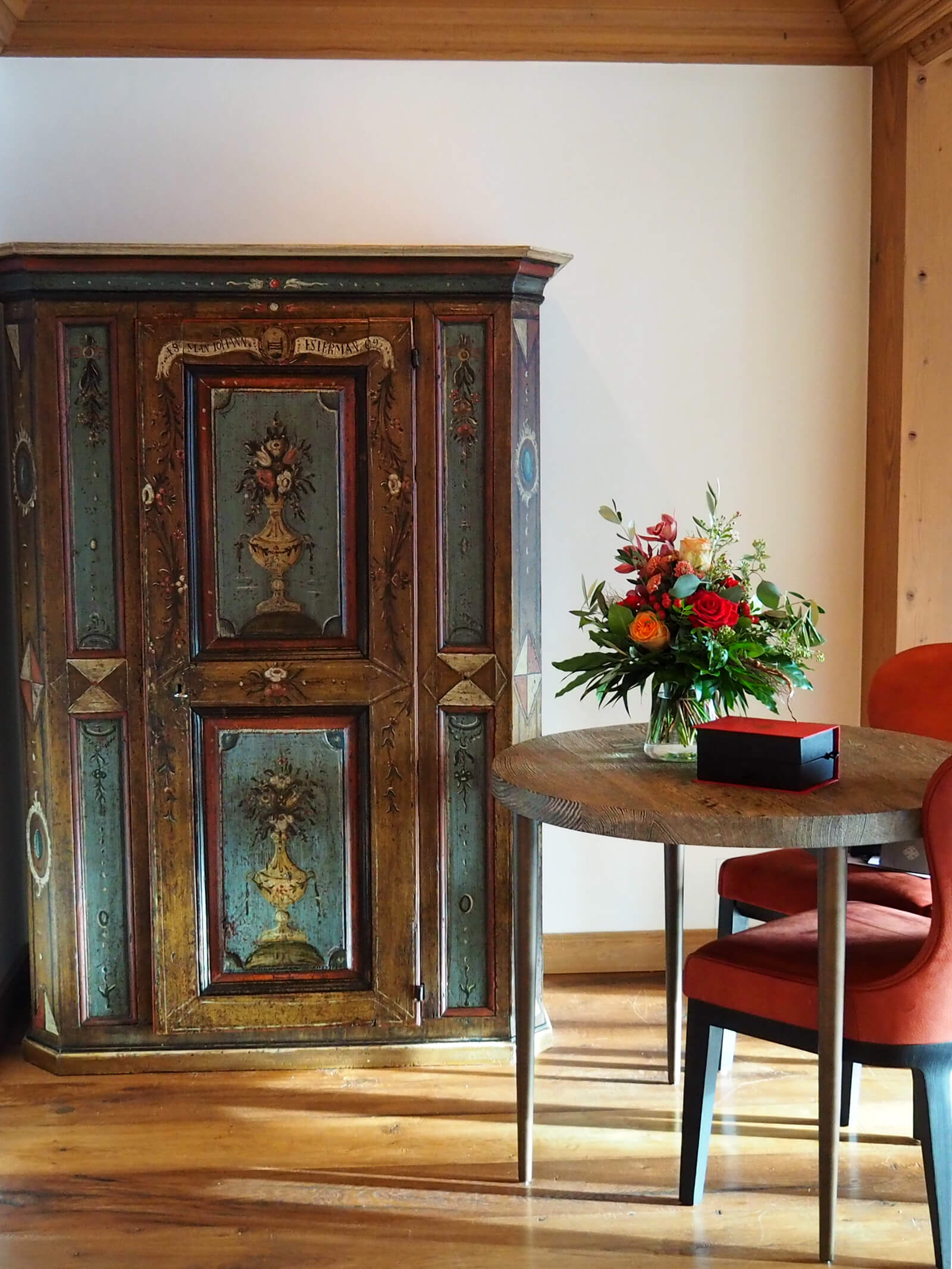 From there, a hallway with built-in closets leads to the large bathroom. Yet the sitting area also opens up to the suite which functions both as a living room and a bedroom. 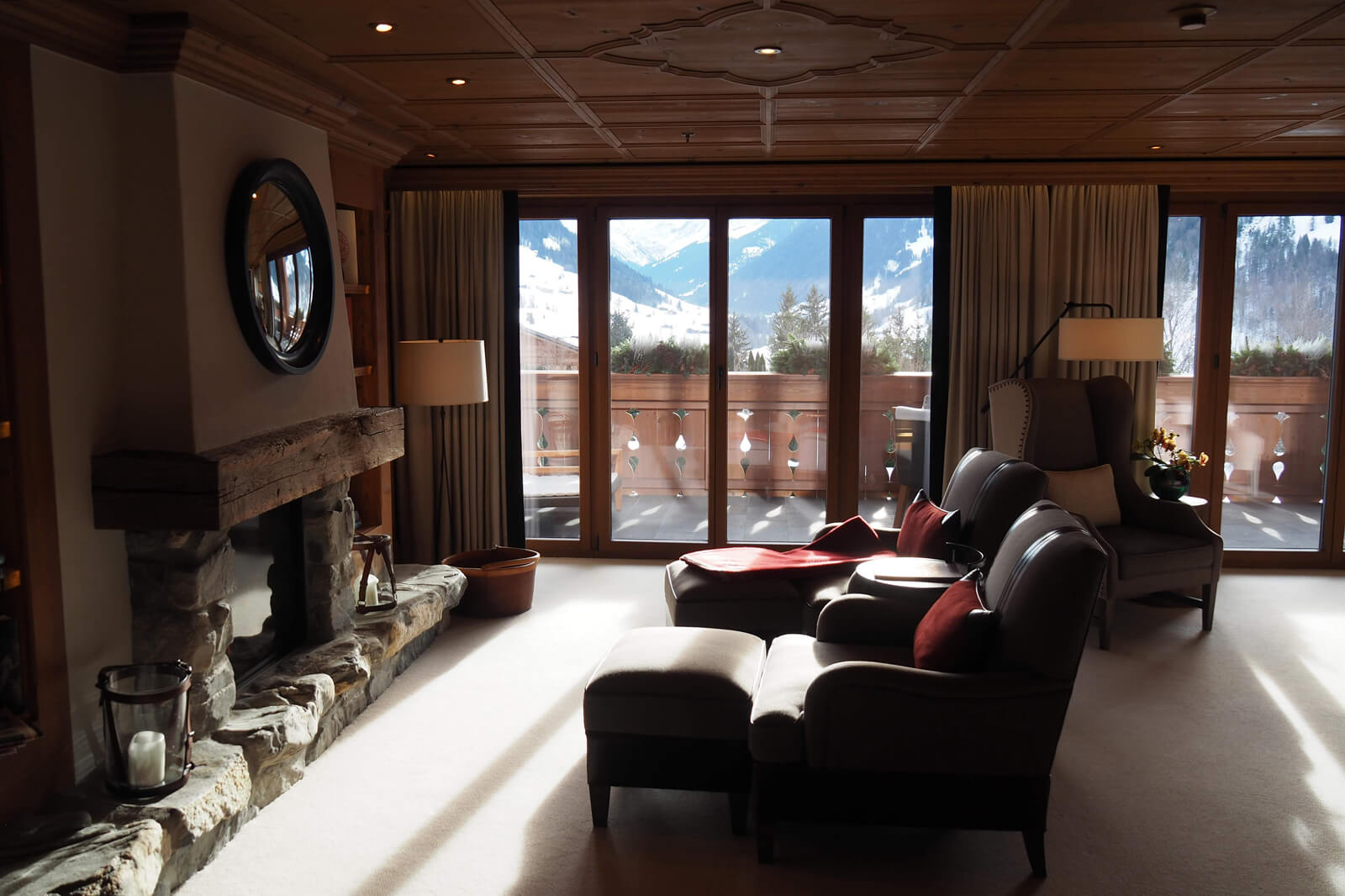 The bedside lamps shaped like cowbells are just one example for the many Swiss design elements. For guest from abroad, staying here must give them a strong sense of place - they are in Switzerland, no doubt about it.

There is a fireplace as well as shelves with an interesting collection of books. Each wood panel is wearing history on its sleeves and it rings true that it was locally sourced from old barns and buildings. There is a feel-good abundance of textures, ranging from leather columns to fancy fabrics and goat hair rugs. This authenticity and attention to detail is what sets The Alpina Gstaad apart from many other five-star hotels where rooms may be of high quality but lack uniqueness.

Floor-to-ceiling windows open up to the balcony. What a view from out there! I am reminded about what I love so much about Gstaad. It is those unthreatening, softly sloping mountains and the generosity of sunshine. There are no harsh cliffs or pointy peaks. Instead, Gstaad feels like a town embedded by hills, yet at an altitude of 1050 meters above sea. The Alpina Gstaad has an artistic streak, too.

Little did we know that this luxury hotel in Gstaad is also an art gallery. A part of the owners’ extensive art collection is out in the open for everyone to see. Other pieces are at the restaurant, inside the cigar lounge or at the hotel's own cinema. 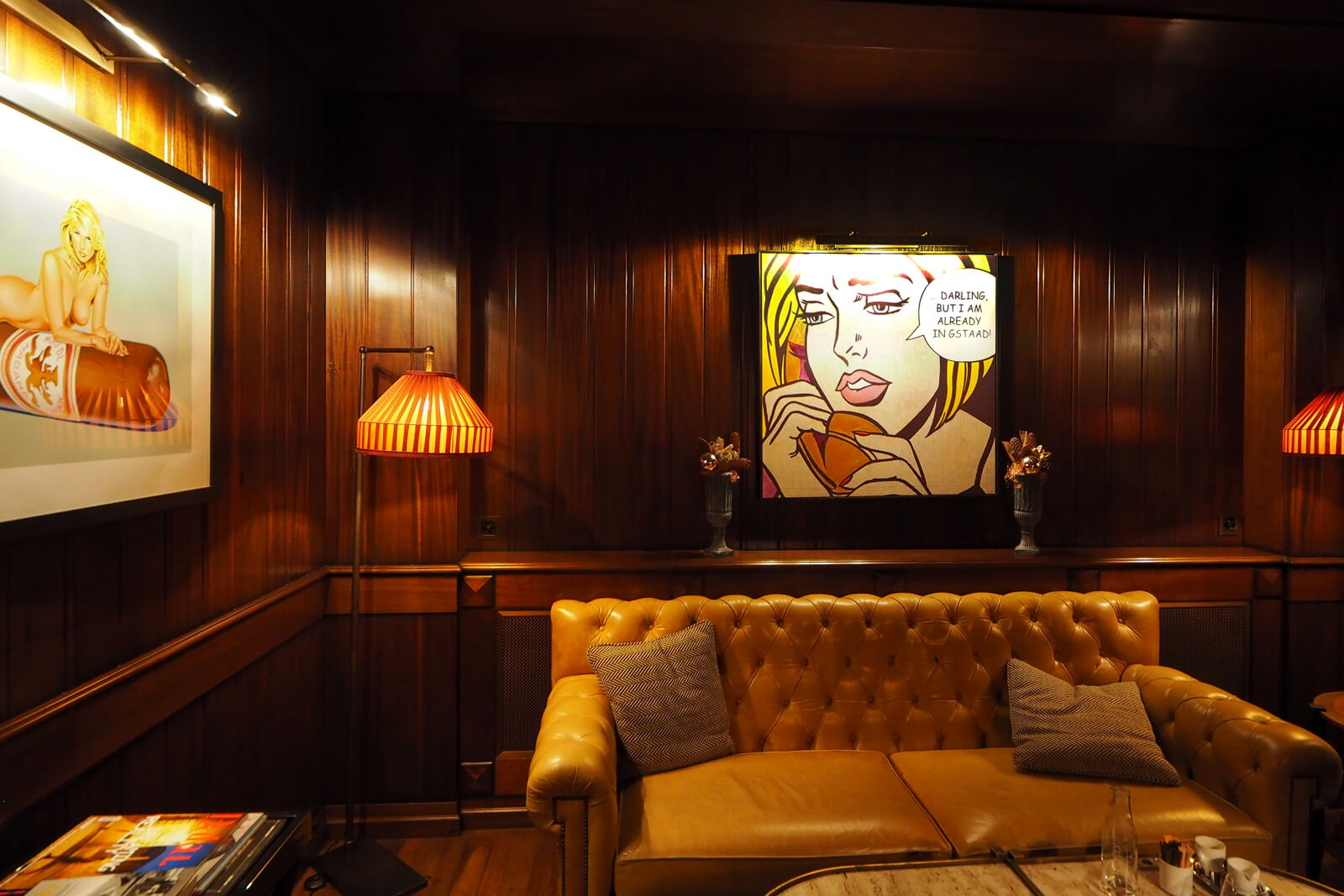 One piece which catches our attention right away is a large ceiling painting above the main staircase.

We are told that the 32 painted wood panels may date back to the late 18th century! But it wouldn't be The Alpina if there weren’t hyper-modern chandeliers hanging from the very ceiling. It is one of those contrasts the designers like to play with. 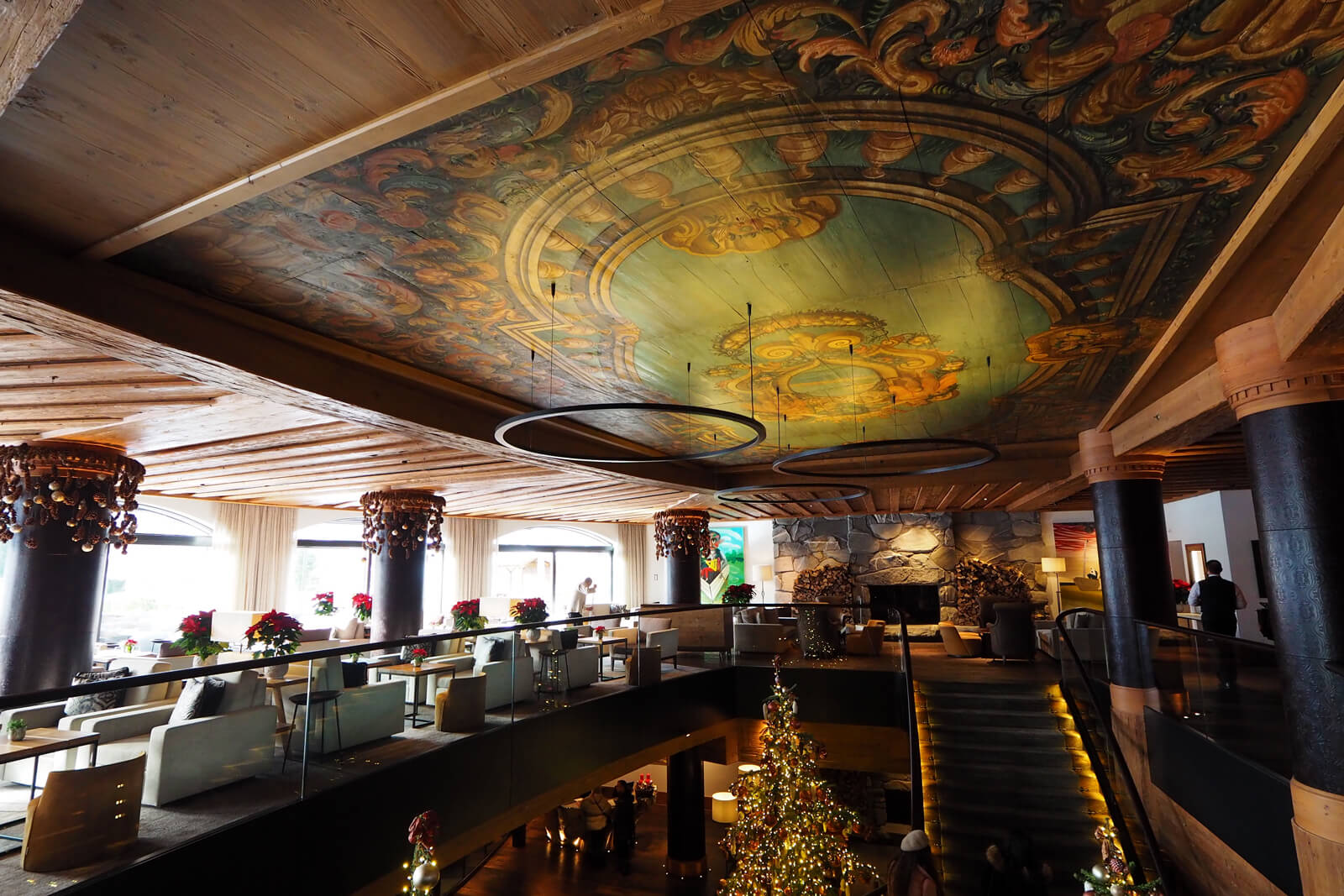 Another noteworthy piece of art is the rainbow colored tapestry entitled "BOTTLETOP".

Hanging from a wall in the lobby, this two meter squared piece is made of 600’000 aluminum tabs from soda cans. It is no coincidence that the artist collective in Nepal has created 17 woven bands - the number of global goals in the #Envision2030 campaign by the United Nations. 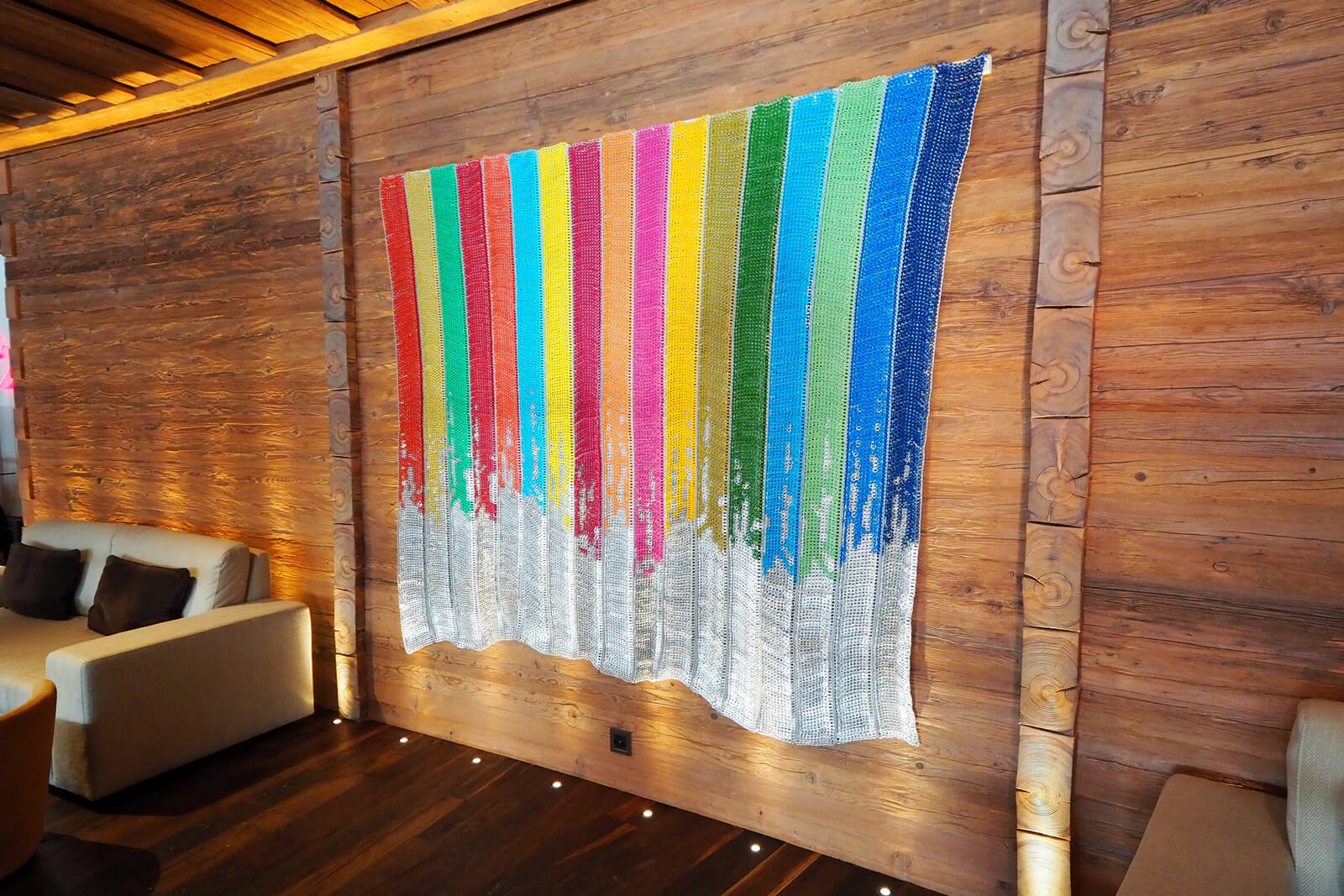 The hotel actively supports the 17 goals for sustainable development. In fact, this program was initially launched at The Alpina Gstaad. As a result, you will see hotel employees, from concierges to managers, wearing a colored TogetherBand on their wrists. Each color stands for one of the goals and is an invitation to start a conversation. 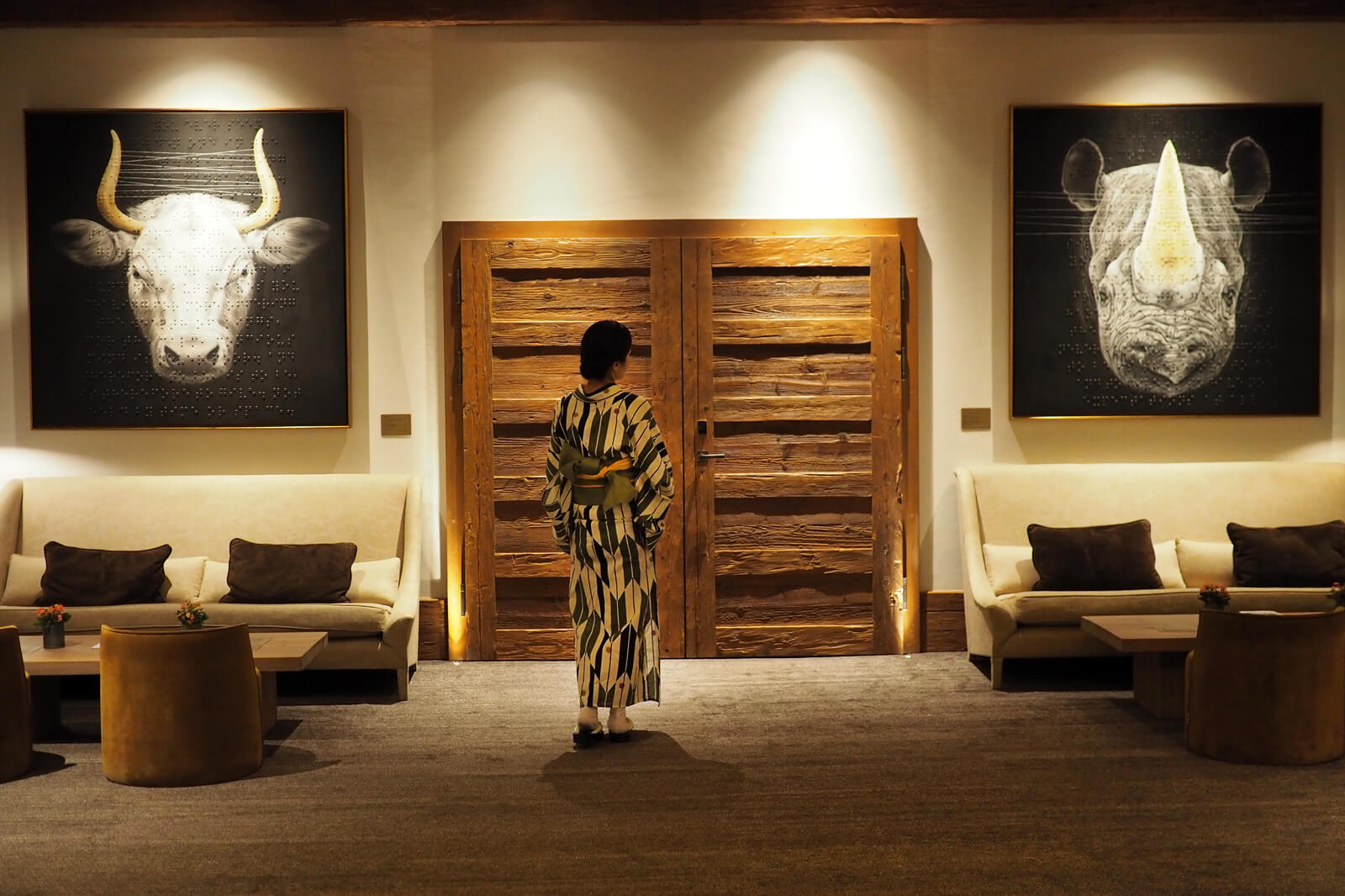 The Alpina Gstaad is a large enough property for not just one, but two Michelin starred restaurants. Our reservation is at Restaurant Sommet, the French eatery helmed by the German Executive Chef, Martin Göschel. As of this writing, Restaurant Sommet has one Michelin star and 18 points Gault Millau. Since his transfer from the members-only Hotel Paradies in Ftan, Göschel has created a signature menu highlighting regional products and local produce. The appetizer plate of delicate langouste carpaccio on a marinade, topped with Imperial caviar, has left a lasting impression.

Göschel is dishing up a modern take on French cuisine, lighter and with an alpine touch. The ingredients are honest, allowing us to taste the essence of each vegetable. And the dishes are beautifully plated, highlighting Göschel’s vision and expert tweezer skills.

The five-course "Degustation Menu" concludes with this sorbet of seaberry on a hazelnut biscuit with Japanese glazed sugar and hay foam: Six Senses Spa, all the way!

Those who have traveled the world might be well familiar with the brand. The Alpina Gstaad houses the only Six Senses Spa in Switzerland - a first encounter for me. 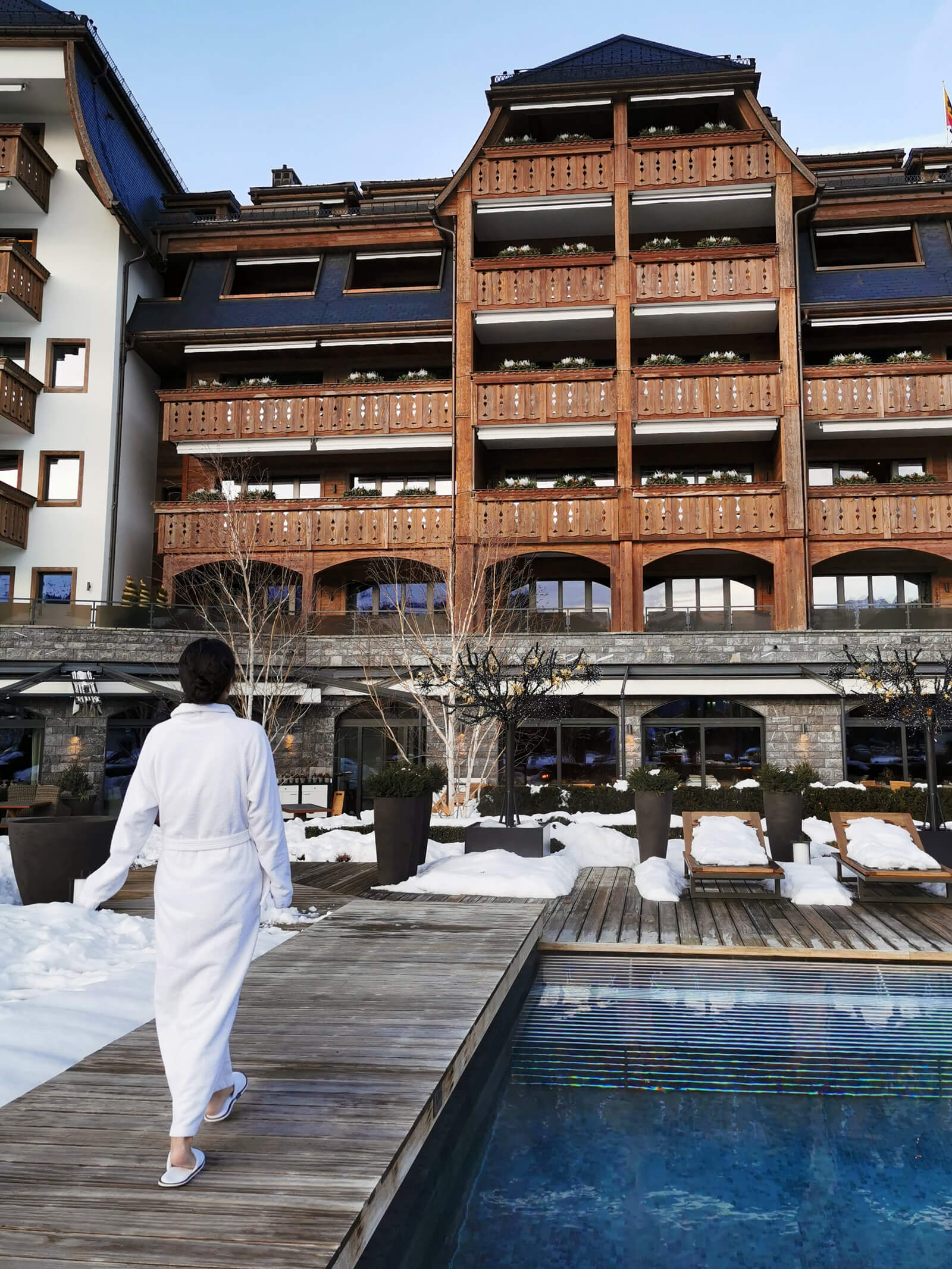 Located underneath the outdoor pool on the lower floor, the Six Senses Spa is quite literally down to earth. There is no straight wall or right angle in this organic dwelling. This may sound cheesy, but I feel like being absorbed by Mother Earth from the moment I step in.

Apart from the five treatment rooms that make you want to cocoon and hibernate, there are separate spa areas for men and women. Each area has a Finnish sauna encased in age-old local wood. There is also a (small) steam room and two tubs, hot and cold. The indoor swimming pool is my absolute favorite in Switzerland. The access is via a path of rocks. And the ceiling above the pool, which uses the same antique wood as the rest of the hotel, is lowered down to create a cozy atmosphere. Needless to say, I spent the better part of an afternoon in my (now) favorite spa in Switzerland...

My verdict about The Alpina Gstaad

It comes down to this: I have been privileged to stay at many five-star hotels in Switzerland. And I can say that most every hotel has at least one thing that makes it worthwhile. Be it a staff that feels like family, a history dating back to the Belle Époque, or swimming pools with infinite views.

Call me picky, but it is less common for me to find a hotel that scores in multiple aspects. That Alpina Gstaad, though... It offers the perfect mix of what I treasure most: a designer spa, a blend of historic and new, alpine style, panoramic views to die for and breakfast choices à gogo!

Ramen noodle soup for Mamiko, continental choices for me! I now count myself to the many previous guests of The Alpina Gstaad who call this one of the best hotel experiences in Switzerland. 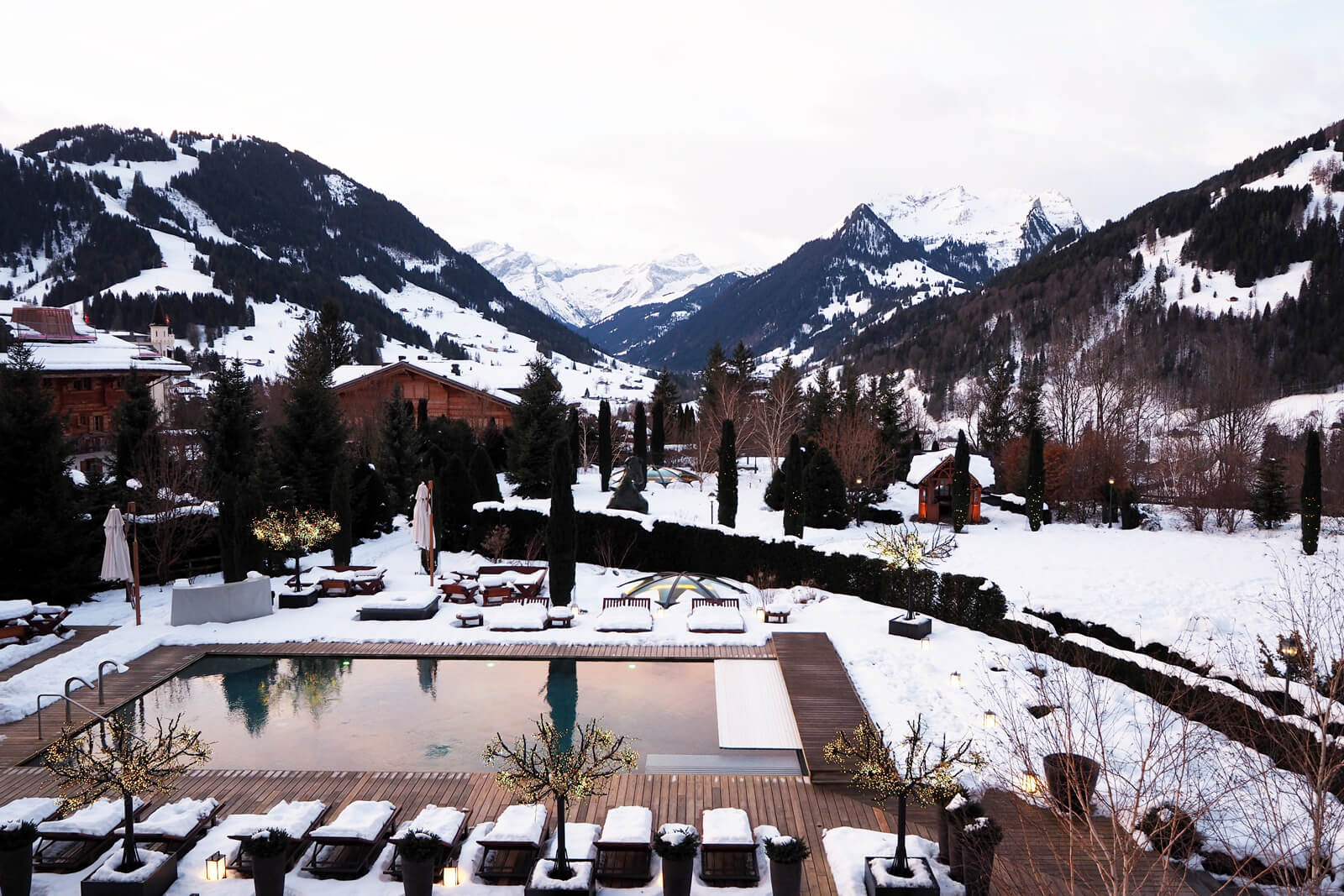 Many thanks to Ms. Schmiedke and Mr. Weiland for taking the time to show us their hotel and for making our stay unforgettable. For the purpose of this review, they have invited us for two nights, incl. half-board and massage at the Six Senses Spa. 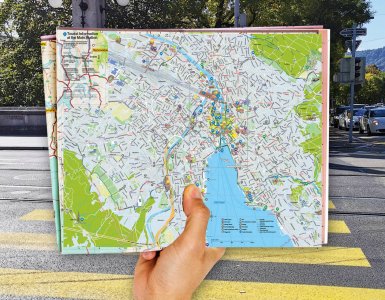 Reading a map allows one to wander around a city in the mind. For Zurich maps, look no further: here is a downloadable PDF map plus many special maps. 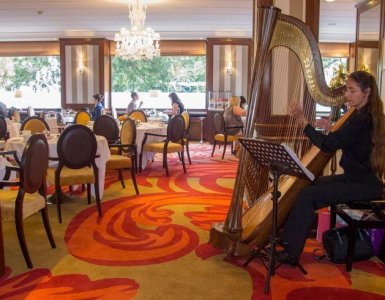 Côté Square – An Exquisite Restaurant at Hotel Bristol in Geneva

The venerable Hôtel Bristol in Geneva has more going for it than classy rooms overlooking a courtyard in a prime location near the Mont Blanc bridge... 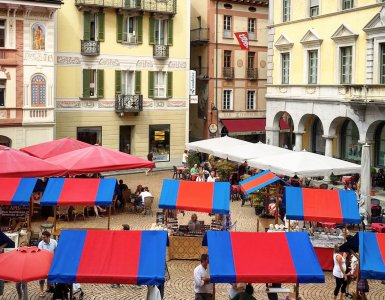 At the Bellinzona Saturday market, culinary artisans from all over Ticino sell seasonal treats and fresh pantry staples...

EAT, PLAY, ROVE in the footsteps of our favorite Zürich zealot

Manage Cookie Consent
To provide the best experience, we use technologies like cookies to store and/or access device information. Consenting to these technologies will allow us to process data such as browsing behavior or unique IDs on this site. Not consenting or withdrawing consent may adversely affect certain features and functions.
Manage options Manage services Manage vendors Read more about these purposes
View Preferences
{title} {title} {title}
450 Shares
Share375
Tweet
Share
Pin75
WhatsApp