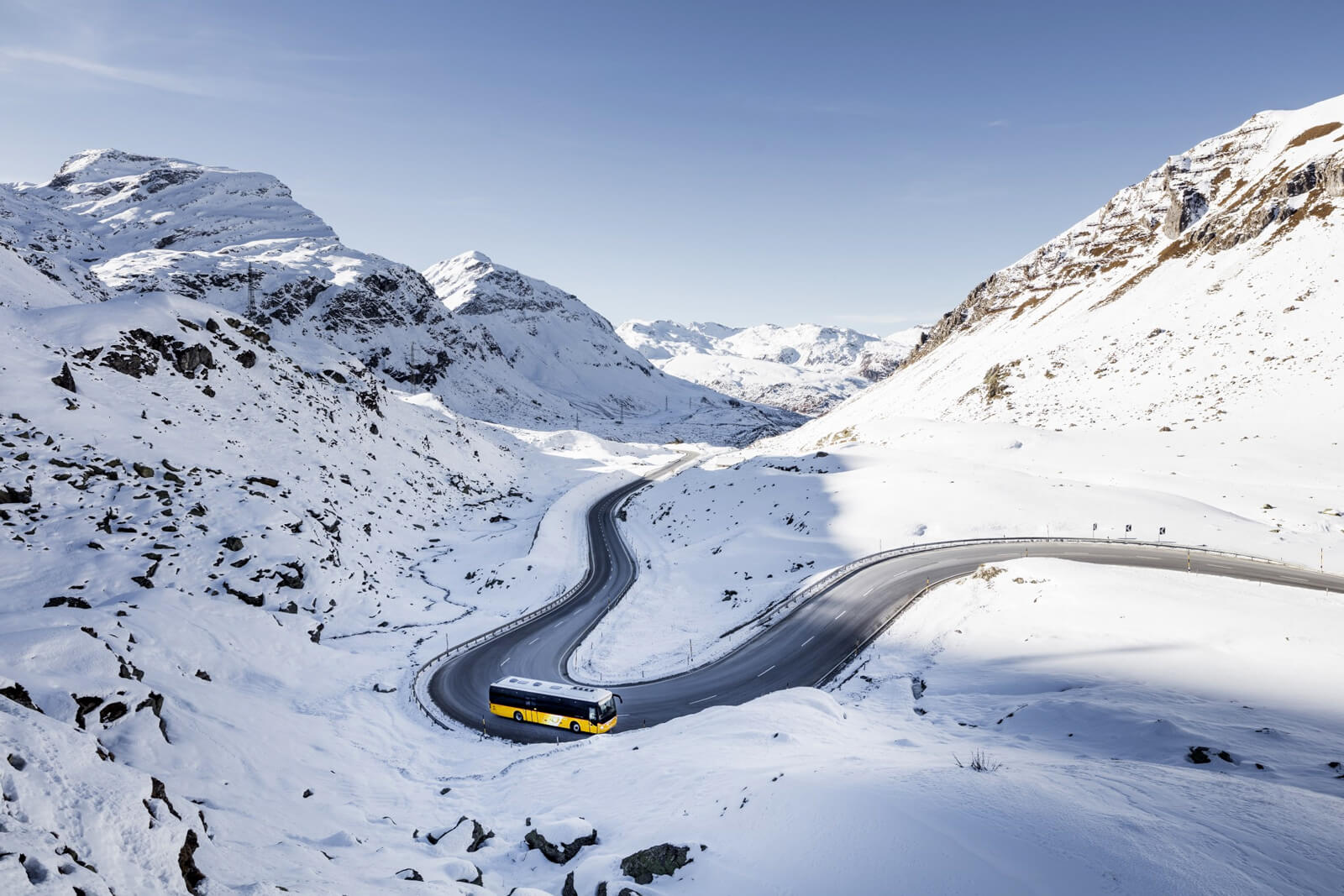 The experience of riding on a Swiss PostBus could be summed up like this: you, tucked into a cushy seat, marveling at the scenery with your nose stuck to a panoramic window. At the wheel: a driver who maneuvers the bus on those narrow and winding mountain roads like a boss. It takes some guts - and loads of experience.

Either way, it pays to know a little bit about the history behind the Swiss mail delivery buses. In 1849, Switzerland started the expansion of a countrywide network of mail carriers. At the time, they were using horse carriages to transport mail through valleys and across mountain passes. By 1906, horse power was leveraged and the first ever Postauto bus was put in place between Bern and Detligen.

It took until at least 1919 before mail delivery buses took off in Switzerland. This is the year when the impressive Simplon Pass street was opened, facilitating the crossing from North to South. Dozens of military vehicles would be repurposed into mail delivery buses. And as a consequence, the original horse carriages became a thing of the past.

Now that the Swiss Postal service was officially in charge of transportation of people and mail, the Alpen-Post was finally founded between 1920 and 1922. This was a milestone in the history of Switzerland, as mail delivery became less risky and could now be guaranteed across most mountain passes.

The right postal bus for every destination

Today, the Swiss Post maintains a fleet of over 2300 vehicles of various shapes and sizes. Depending on the destination, the access road and the expected passenger numbers, one of 14 types of buses will be used. One of the newest is a convertible bus that can be rented for special occasions: Among the more common Swiss postal buses are the low-floor buses, the intercity buses with storage compartments underneath, or the shorter vehicles for up to 25 passengers serving as school buses in alpine communities. One of the more special postal buses is the double decker for up to 87 seated passengers.

My favorite row of seats is in the very front above the driver... The views from the upper deck are something else! 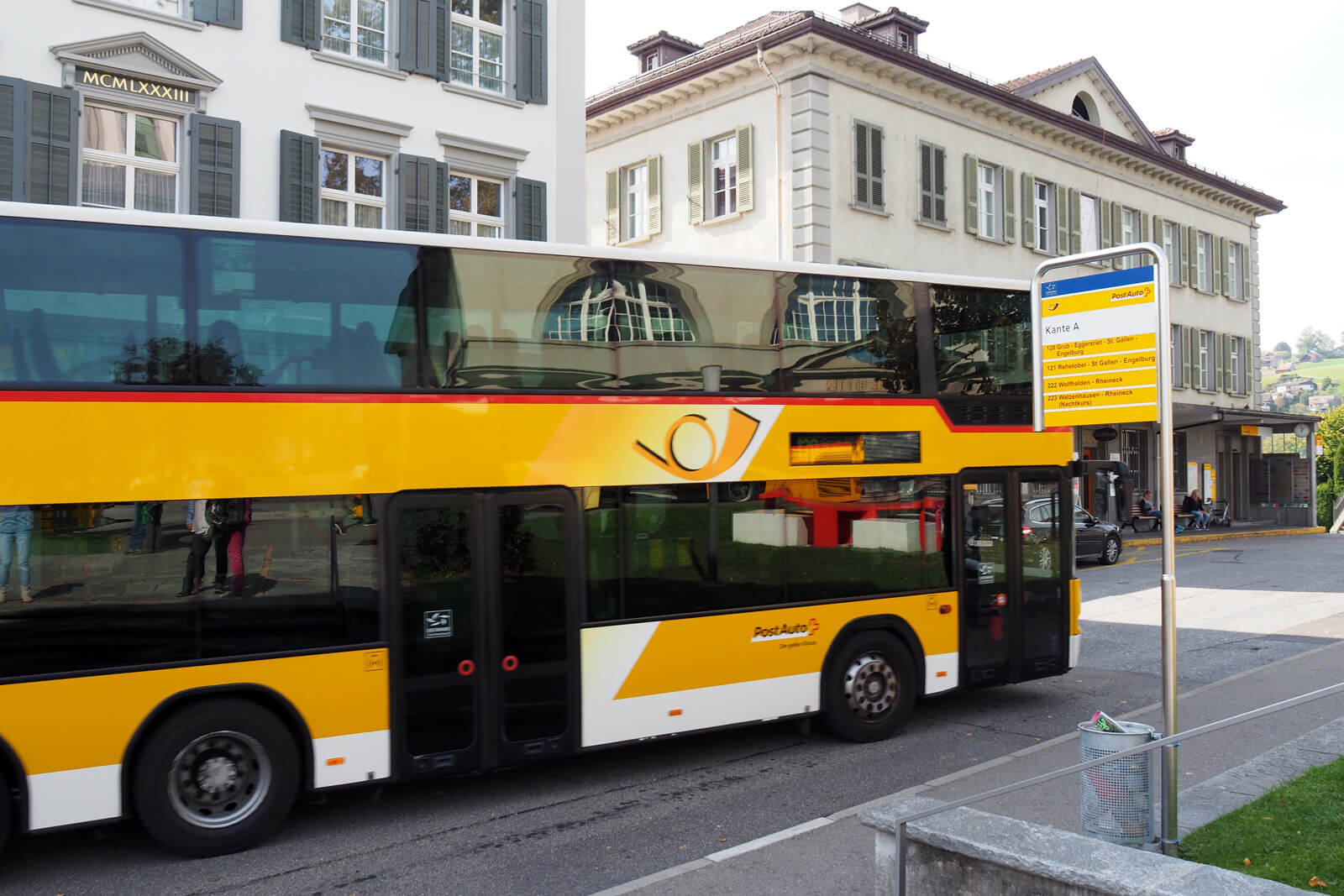 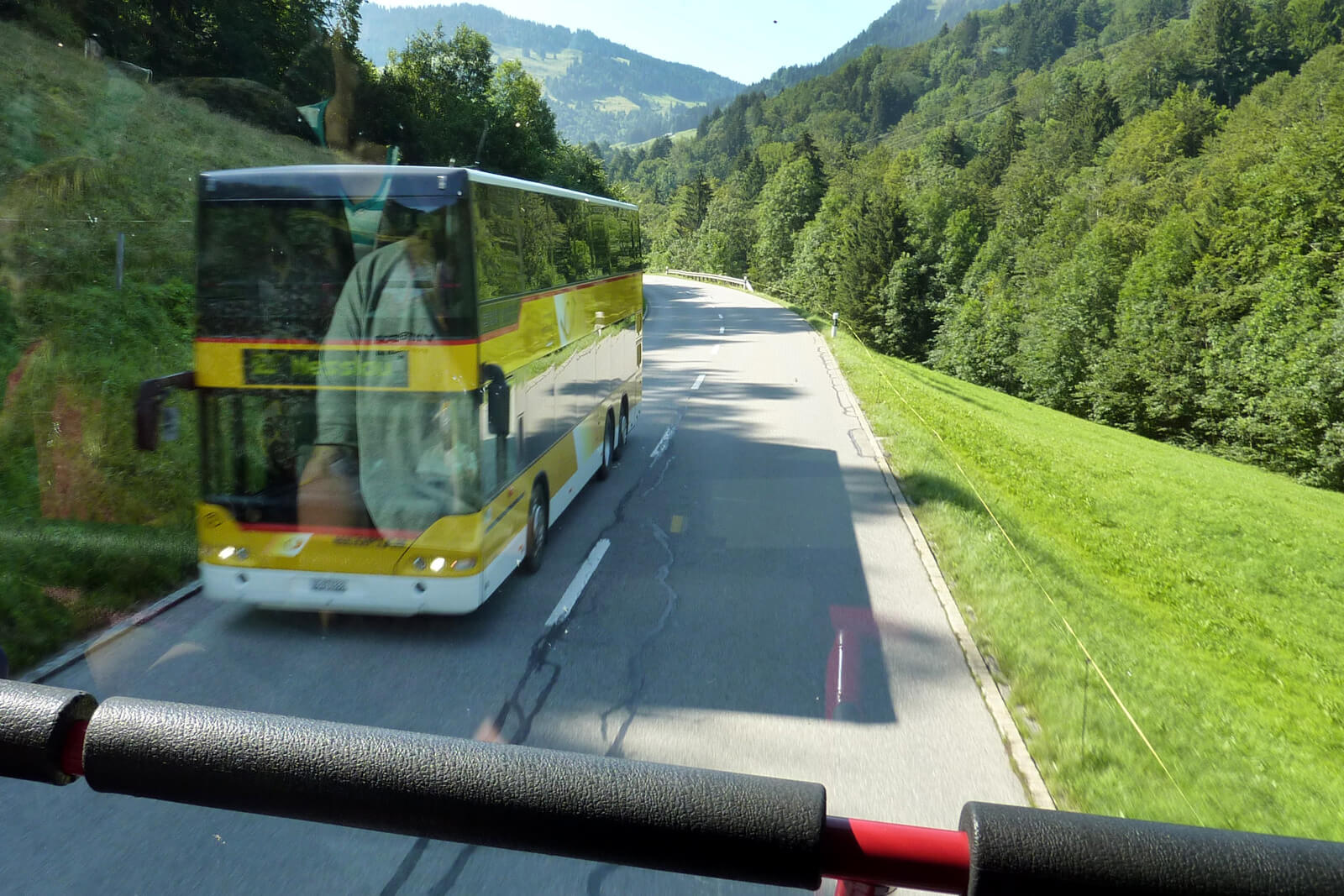 Many a friend visiting Switzerland for the first time has expressed surprise about one detail: the Mercedes star on the front side of these yellow buses... That’s right, the Swiss public transport infrastructure is top notch - inside and out!

Whether large or small, what all the postal buses have in common is the iconic three tone melody: Tüüü-taaa-tooo!

Free WiFi on board postal buses

Given the fact that many routes lead through alpine terrain, cellular data reception is not always available. So I find it amazing that Swiss postal buses feature free on-board WiFi. This is an amenity I cannot live without! 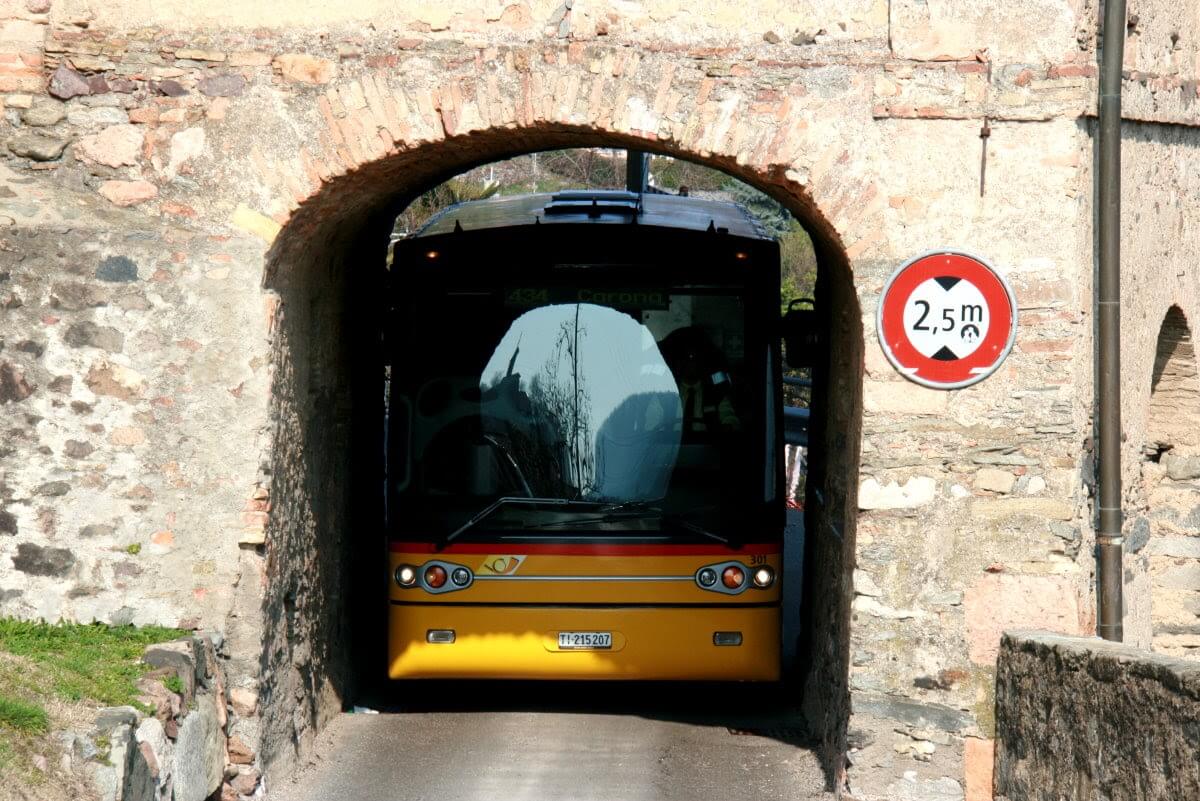 Postal busses are a vital link in Switzerland’s public transport system. They will go to all the places that trains cannot reach. (And that some car drivers do not dare to reach!) Think alpine villages in rugged valleys, high-altitude passes or extremely narrow and winding mountain roads.

But instead of using the Swiss bus system as a means to an end, the journey can also be the destination. Here are some routes that lend themselves for unforgettable day trips.

If you happen to be in Meiringen and have 8 hours and 45 minutes to spare, consider yourself lucky. The Central Alps round-trip tackles four alpine passes in one day. It is a panoramic tour with impressive sceneries, including glittering lakes, amazing glaciers and Switzerland’s highest altitude road at the Nufenen Pass. Switzerland has a network of 19 parks that are mainly located in the Alps and the Jura mountain range. Not surprisingly, postal buses are the best way to reach them. Some of the most amazing natural parks include Beverin, Doubs, Parc Ela and Chasseral. (The latter is coined as the Grand Canyon of Switzerland.)

Among these Swiss parks, there is one considered the Swiss National Park. It was established in 1914 and is the oldest such park in the alpine region. There is a visitor center in Zernez. But if you hop on the Engadine - Meran route, you can actually cross the park by PostBus. This scenic route on PostBus Switzerland leads from Chur to St. Moritz. It is an up and down adventure, first ascending to the idyllic town of Lenzerheide. From there, the journey continues to Tiefencastel and Savognin.

We have crossed the Julier Pass on several occasions on our own. But sitting on a PostBus while taking pictures of the small villages and sparkling lakes is still on our list. This is a historic route along the footsteps of Napoleon. The PostBus departs from Brig in Valais and cross the Simplon Pass, a major connection to Italy. The small town of Domodossola has Italian flair, so it pays to hang around for some gelati ice-cream before continuing on your trip.

More than 300’000 commuters and tourists rely on postal buses daily. Are you going to be one of them? 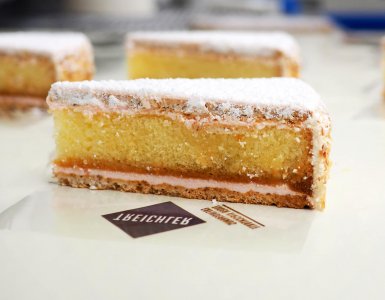 From Audrey Hepburn to César Ritz, many famous names have left a mark on Switzerland. Here are some curious and intriguing facts...

31 reasons why Switzerland is the happiest country

Switzerland has often topped other countries in happiness ratings. What are the reasons for all these good vibes among the Swiss? 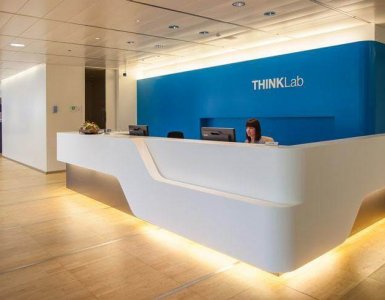 Manage Cookie Consent
To provide the best experience, we use technologies like cookies to store and/or access device information. Consenting to these technologies will allow us to process data such as browsing behavior or unique IDs on this site. Not consenting or withdrawing consent may adversely affect certain features and functions.
Manage options Manage services Manage vendors Read more about these purposes
View Preferences
{title} {title} {title}
1K Shares
Share1K
Tweet10
Share
Pin67
WhatsApp