Alpine coziness at the Waldhotel National in Arosa 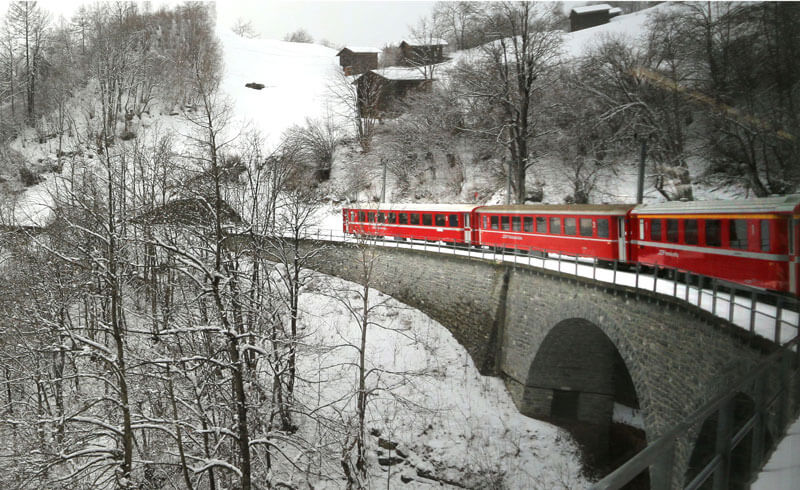 Arosa seems like at end of the world for city slickers like us. But for one weekend this February, Arosa became the center of our world.

Fresh snow has fallen the night before, so we feel intimidated to climb 1000 meters of elevation from Chur to Arosa while mastering 360 curves. Thanks to the Park&Ride garage in Chur, we safely park the Newly Swissed car and hop on a train. After an hour of crisscrossing UNESCO World Heritage viaducts and soaking in breathtaking panoramas, we stand in front of the frozen lake in the center of Arosa. 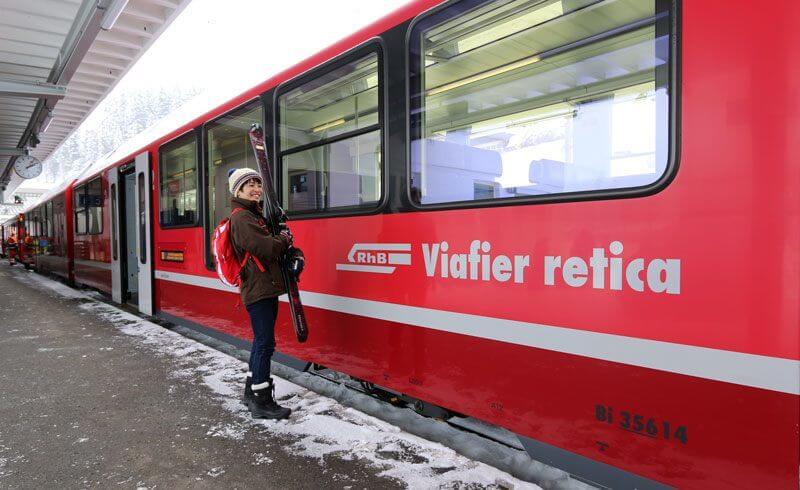 With ski gear in tow, it is a pleasant surprise to be picked up by the hotel shuttle of the Waldhotel National Arosa. The skilled driver maneuvers his van up a steep, snow covered slope to the hotel overlooking the village. This is our first "Waldhotel Moment", and we are sure glad to have parked our car in the valley... 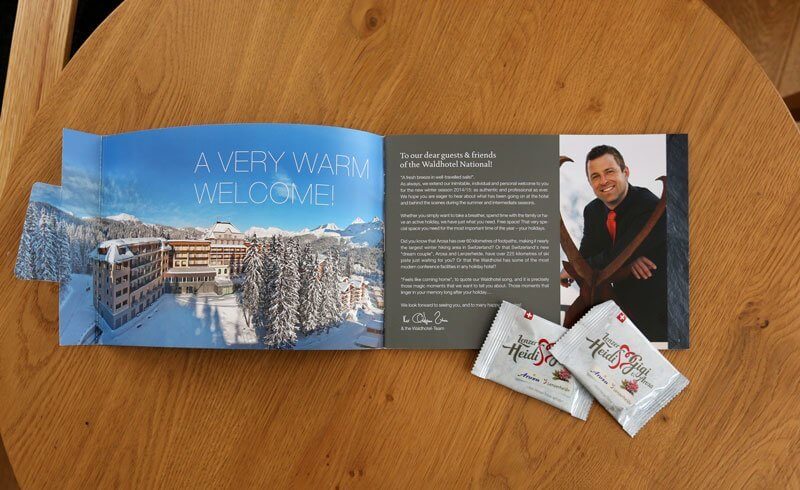 Modern Living in the Alps

Our corner suite is located in the newly renovated wing of the hotel, Chesa Silva. The accommodation provides a perfect symbiosis of modern comfort and Alpine coziness. Whether it is the stone walls or the Swiss pine wood throughout, we have rarely stayed in a room featuring such high quality materials. 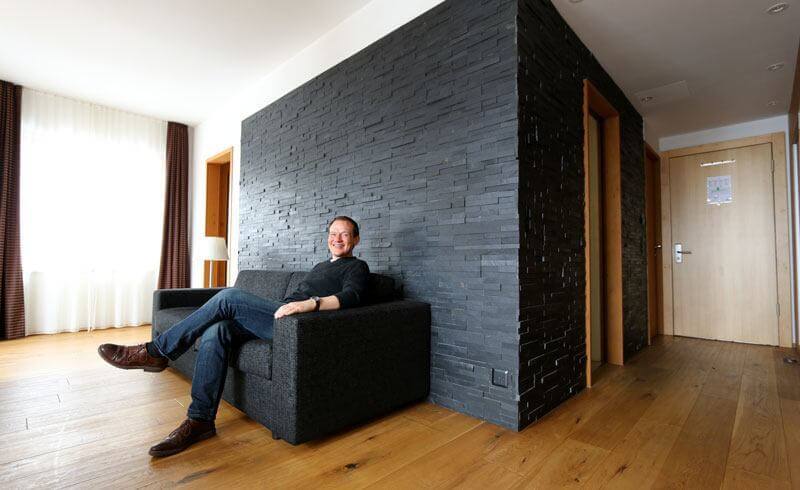 While I am checking out the flatscreen TV's (plural!) and the cleverly concealed Nespresso machine, Mamiko takes a moment to write a postcard in the comfy bedroom. We love the feel of this place, so the Waldhof National is definitively a hotel to write home about... 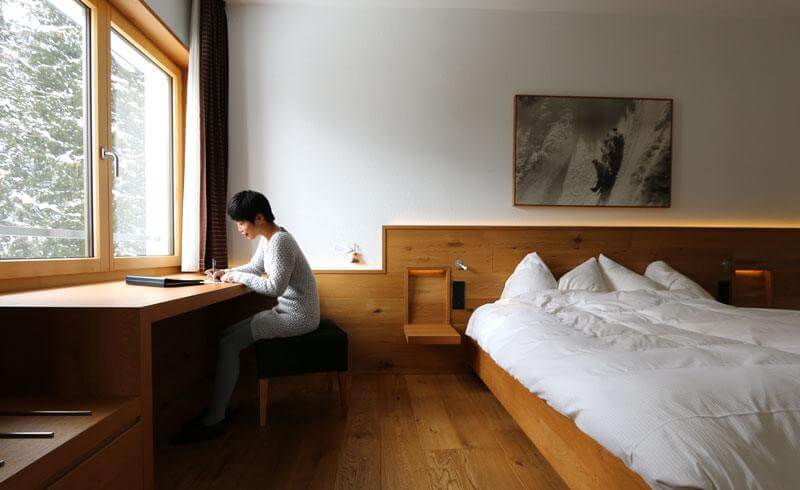 Arosa is a Winter Wonderland

The few pictures we managed to take while skiing speak volumes: Given that Arosa is located at the end of a wide valley, the sunny slopes are perfect for leisure skiers like us. From most anywhere, the views of the impressive mountain range across the valley floor are unobstructed. 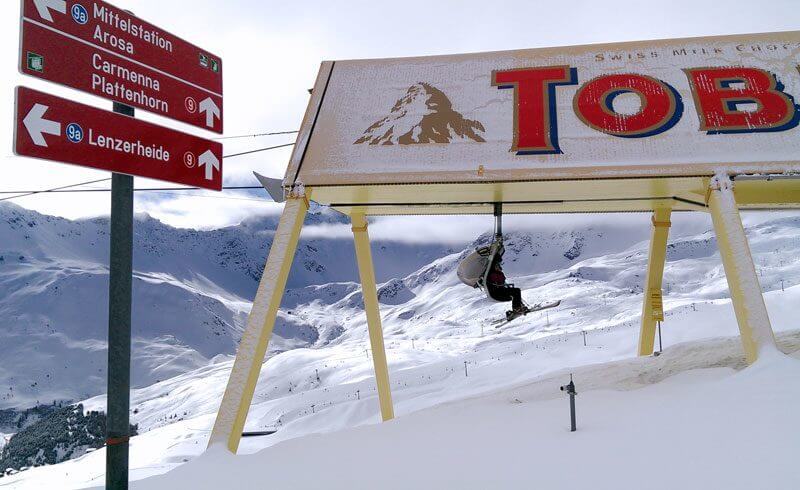 We are thankful to Mamiko's dad for teaching her to ski at a young age - even though she grew up by the ocean. Up and down we go all day with our ski pass courtesy of Arosa Tourism. The snow conditions could not be any better. 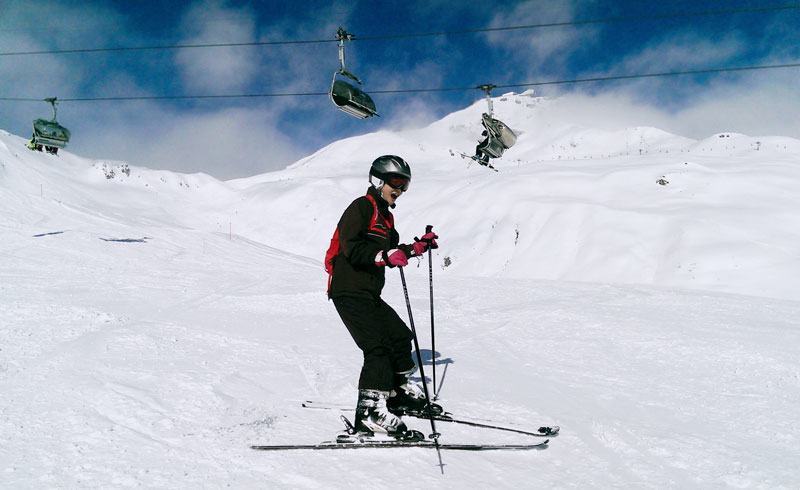 Our ski pass covers the slopes of Lenzerheide, too. But Arosa leaves no wishes unanswered on this sunny February day... 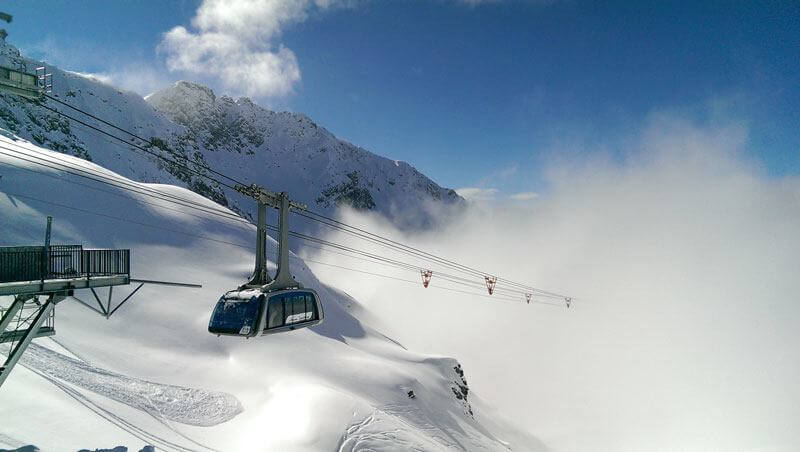 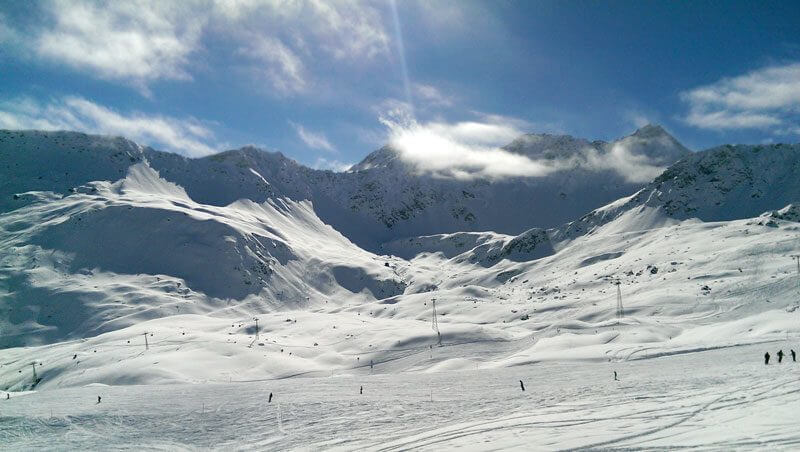 Just an hour after leaving the pristine slopes of Arosa, I am sitting across Christian Zinn. He is the hotel director at the four star Waldhotel National Arosa.

We are at the Kachelofa-Stübli, the hotel's gourmet temple with 16 points in the GaultMillau guide. The restaurant is consistently booked out as it is a popular choice among locals and hotel guests who decide to upgrade their half board. If the languages spoken tonight are a clue, foodies and gourmands travel here from all over Europe. The namesake in the center of the cozy living room setting is a century old ceramic heater, a Kachelofe. But the rustic Swiss décor is just about where the Swissness ends. The kitchen under the direction of Chef Gerd Reber juxtaposes exotic flavors such as passion fruit with local flavors such as black salsify or truffle.

Tonight's culinary excursion over five courses is going to be a treat for all the senses - starting with terrine de foie gras topped with mango chutney and accents of passion fruit. Heavenly. 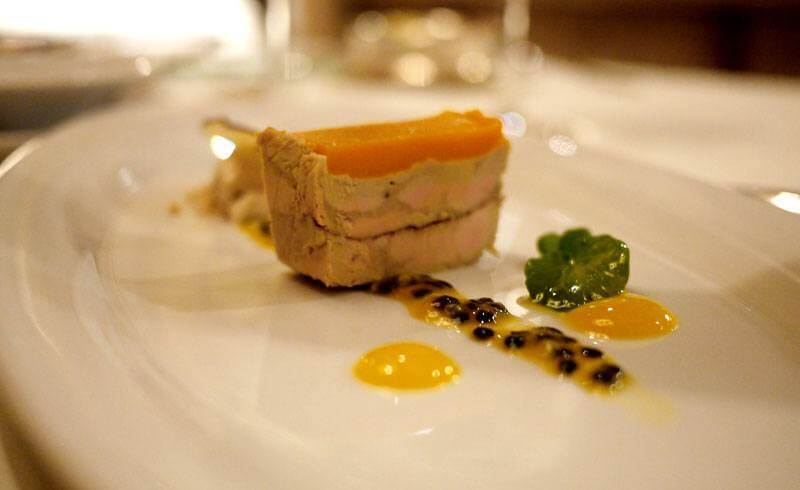 How Employer Branding Works for Hotels

Having grown up in his parents' hotel, Zinn is a natural host: As other patrons are seated in the Kachelofa-Stübli, Zinn personally welcomes each by name and inquires about the day's activities. Truly, the guest service here is top, and it becomes clear that Zinn serves as a role model for his staff. He adds: "Being a hotel director is about way more than entertaining of guests, though."

As the salmon tartar arrives, my conversation with Mr. Zinn turns to employer branding. How can a hotel attract - and retain - the best talents? "We offer fully equipped rooms, healthy food choices and free WiFi to seasonal employees," Zinn explains. While one would think that this is a standard benefit, I learn that most hotels provide only basic accommodations without WiFi for their seasonal staff. 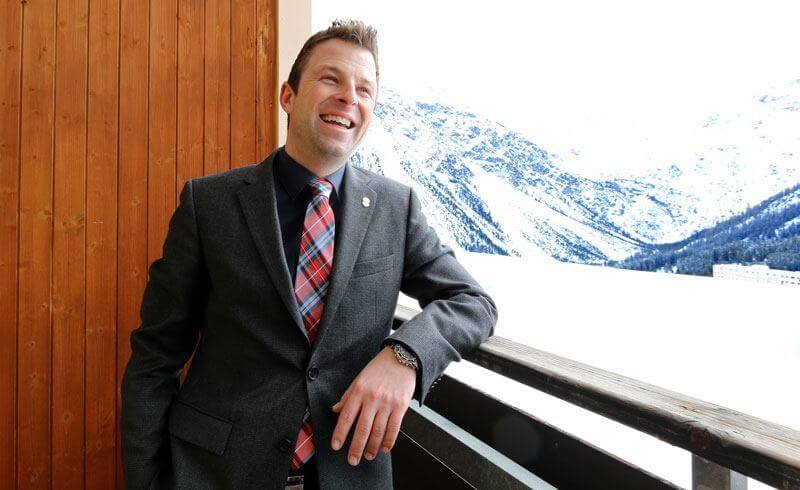 The director of Waldhotel National is convinced that those small extras make a big difference in the lives of his foreign workers. Zinn's positive attitude and genuine empathy for his employees is why many of his seasonal staff recommend the Waldhotel National to others back home. As a result, the hotel's employer branding efforts have a positive effect on retention rates.

Mr. Zinn inquires with the chef: "Are you ready for tomorrow's game?" I learn that this is the night before the annual "management vs. staff" hockey match. While Chef Gerd Reber is an avid hockey player, Mr. Zinn will be sitting this one out. Instead, he is gearing up for the upcoming company ski race... 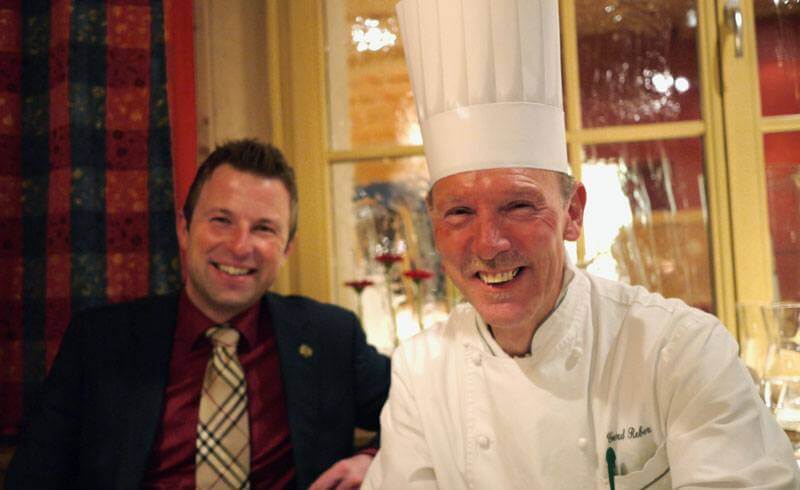 In a margin driven industry like tourism, employee engagement activities are rare. The business driven mentality is that employees are there to do their work. But allowing staff to use the in-house spa facilities once a week (after hours) or staging sporting events once in a while can have a significant impact on employee satisfaction. Zinn: "In most hotels, the kitchen staff has never set foot in the spa area."

When it comes to the Waldhotel National, I am surprised at the young age of the management staff. The average age is somewhere in the mid thirties, and Zinn is certainly not one to raise the average age. "I believe in enabling my management staff by giving them responsibilities that help them grow."

Despite leading a traditional house where Thomas Mann used to be a regular, the young hotel director shows an incredible entrepreneurial spirit: As the champagne parfait with raspberries is being served, our conversation has moved on to Google Analytics, newsletter marketing and blogger relations. 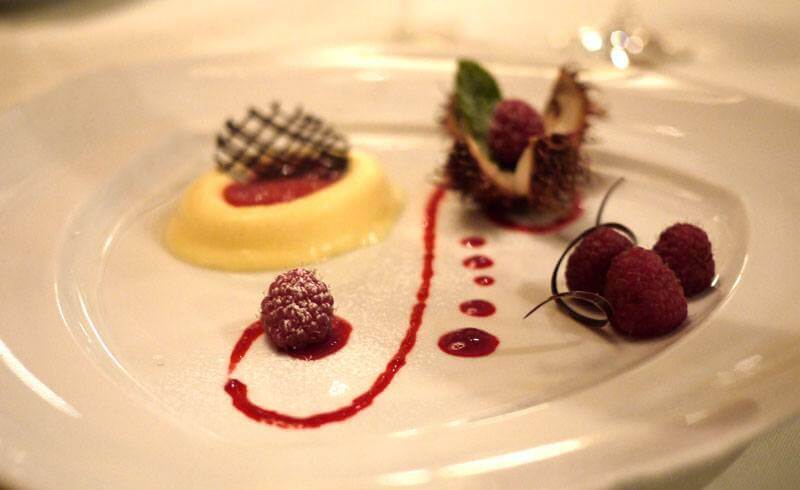 By the end of the evening, I appreciate how broad the knowledge of a hotel director must be to make it in the 21st century: From accounting to marketing, from logistics to maintenance and all the way to the culinary arts and social media.

The Waldhof National in Arosa is at the cutting edge of the hotel industry.

"The common wisdom among hoteliers is to keep as much of the guests' expenses in house as possible. I subscribe to the idea that strategic partnerships with local businesses are a win/win scenario."

Zinn has already put this philosophy into place: Guests enjoying a half board are free to dine at Aifach, a gourmet restaurant with show kitchen in town. In exchange, the young owners help cross-promote the hotel's Aqua Silva spa with its steam bath, herbal infusion rooms and various saunas. 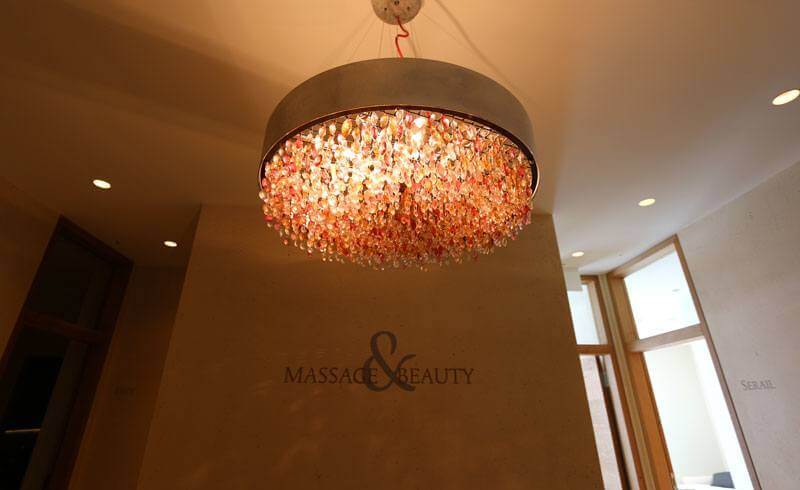 Before we check out, another one of those "Waldhotel Moments": A family is waiting for entry into the Thomas Mann Restaurant - along with their overjoyed lab retriever. Unfortunately, dogs are not allowed, but the hostess offers to watch the lab while the family dines. Said, done: A minute later, this upbeat canine is making friends with the front desk attendants! It is this kind of "can do" attitude that we find over and over again during our stay. 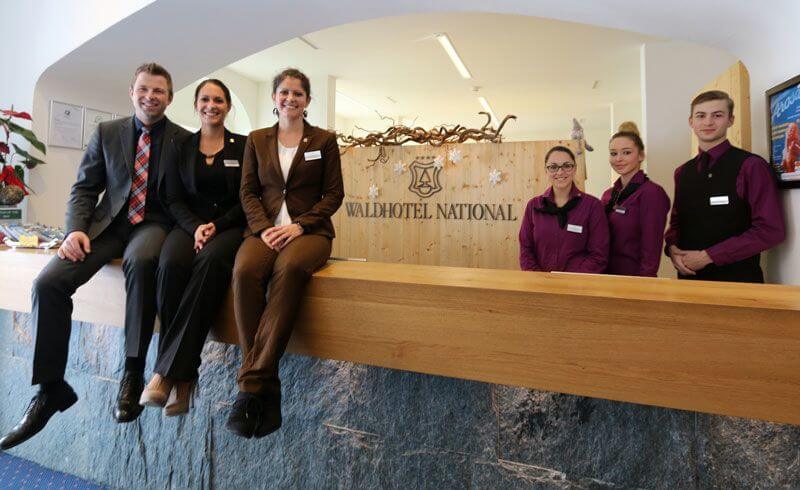 It's what makes out the difference between a hotel and a home away from home. Thanks to Christian Zinn and his team for a memorable weekend in the Swiss Alps! 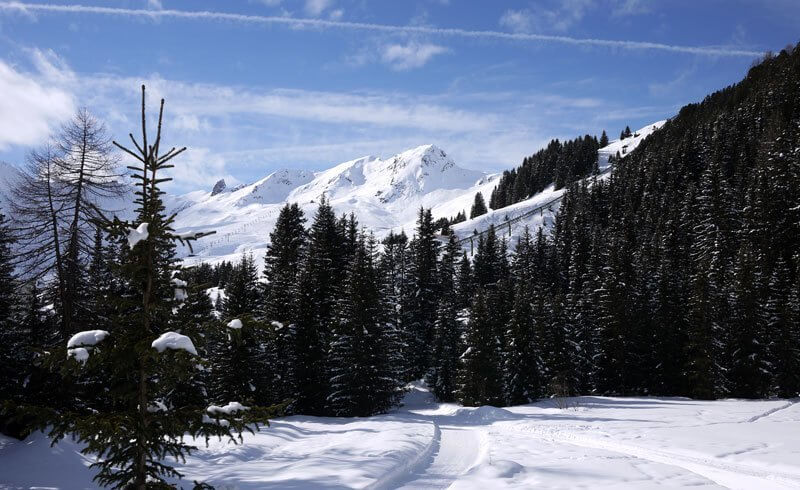 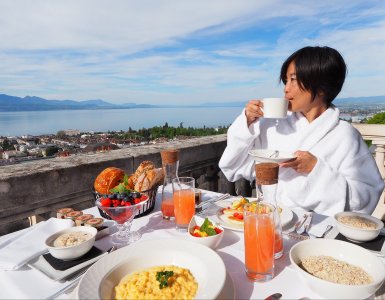 The Lausanne Palace***** is what dreams are made of

Rue du Grand-Chêne 7: this is the address I'd like to print on my business card. Until then, I might have to be a regular at the Lausanne Palace... 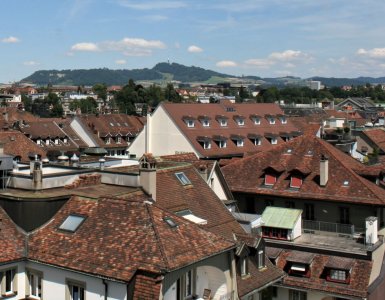 My favorite season is summer because of the energy floating around everywhere. In Bern, there are several hot spots with amazing views... 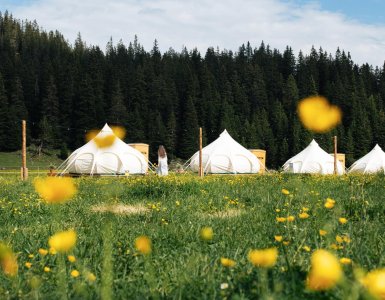 Why you should stay at the TCS Glamping Village Alp Plaun

Switzerland's glamping village is located inside an alpine playground for hikers, bikers and swimmers looking for micro-adventures. We have tested it.

Manage Cookie Consent
To provide the best experience, we use technologies like cookies to store and/or access device information. Consenting to these technologies will allow us to process data such as browsing behavior or unique IDs on this site. Not consenting or withdrawing consent may adversely affect certain features and functions.
Manage options Manage services Manage vendors Read more about these purposes
View Preferences
{title} {title} {title}
71 Shares
Share64
Tweet7
Share
Pin
WhatsApp