You always remember where you were during the great matches.

Whether it is the moment your team cruelly crashes out to Iceland (Idaplatz, Zürich) or beats Holland 4-1 (Uppingham, England). The atmosphere, location, and the people you are with can make or break a match. So, it is worth picking your spot for the big matches - and getting the beers in early.

While the tournament begins with Russia vs. Saudi Arabia on June 14, Switzerland's mouth-watering opening match is against Brazil on June 17. Before that, we will be treated to a Portugal vs. Spain derby on June 15, and the tiny nation of Iceland taking on mighty Argentina on June 16.

Where to watch the 2018 Soccer World Cup in Switzerland?

Many of you might be wondering where to watch your home country play in the World Cup. Like during the 2014 World Cup, we have put together a comprehensive guide with the best public viewing places to watch the 2018 World Cup soccer matches in Switzerland. From the thundering crowd noise in a 3'000 person capacity hall, to a cozy Irish pub or a half-time lakeside dip, Switzerland's venues are diverse and plentiful.

Our Idit has been scouting Basel's best World Cup locations. The Bar du Nord will be showing all games on big screens - indoors and outdoors. They promise food, party vibes and surprises. Foodie destination Neue Alte Markthalle will be showing all games. They are promising a cozy, sociable atmosphere. And you can be sure the food will be good, too!

Volta Bräu has set themselves the goal of providing the "most beautiful public viewing spot in our beloved city," even going as far as dismantling part of the beer garden to replace it with a grandstand. Outdoor food and self-brewed beer will accompany every match.

Restaurant Bierhübeli in Bern will be showing live soccer games in a weather-proof environment. Admission is free.

Summerbeach in front of the Bern University is the place to be this summer. All 64 games will be broadcast, and you have the choice to watch them while standing barefoot in the sand or hanging out in a private lounge. Admission to the beach is free, but reserve those lounges fast before they are gone! (100 francs per game)

At the outdoor public pool Wyler in Bern, all games will be broadcast live on the terrasse.

Brasserie 17 in Interlaken will be showing daily soccer matches on no less than five big screens. The venue opens at 5 PM.

The Kulturhof Schloss Köniz will be open daily to show live matches. The qualifications will be hosted in the barn, with the outdoor screen being inaugurated on June 30. The public BBQ is a highlight.

Enjoy soccer games lakeside with a swim in Lake Biel at Seemaettli, Nidau, which expects 30'000 visitors over the course of the competition.

At the Werkstatt Chur, there will be a TV in the courtyard where anyone is invited to go and watch the games.

In Chur on the Theaterplatz (Grabenstrasse 4), there will be a large outdoor screen and fan venue. The Vögele Arena offers free admission for those willing to stand in front of the jumbotron, and paid seats for more comfort. A new seating category is called "Mockba Stol", which is a Russian high chair offering the best views. Whichever seat you choose, reserve it in advance. There is a big public soccer viewing venue down by the lake - about a two or three-minute walk from the Horgen train station. The venue features a bar with food and one of our readers reports a good atmosphere.

In Lausanne-Ouchy, there will be a huge fan zone called Footfest. There is space for 8000 viewers and the organizers have even launched a mobile app for an enhanced experience!

The Great Escape in Lausanne is a "heaven for watching football," according to our Rajan.

On the Lädeliplatz, there will be a public soccer viewing site - along with a cultural program.

We have always had a weak spot for the Neubad, a former indoor pool that's been converted into a cultural space. In this weatherproof location with free admission, there will be two screens showing all the games. Beer and BBQ are served outdoors - what else can you ask for?

In the garden of the Schüür concert hall, all the games will be broadcast live and for free. We like that there is a foosball table where ambitious viewers can test their skills...

Once again, the five-star Hotel Schweizerhof in Luzern is going to host their popular World Cup Live Screening. All the Switzerland matches are projected onto a huge screen in the courtyard.

On the lakeside Ufschötti area outside the train station, there will be a large public viewing with proceeds benefiting projects helping street children around the world.

At the Barena in Schaffhausen, expect a public soccer viewing event with bagels and beer. There's a beer garden, and their Sony Playstation Zone will feature Fifa'18 tournaments.

The WM Arena Schaffhausen at Mosergarten will host various events to watch the soccer games live. Admission for the opening game on June 14 is free in the standing area, and it pays to reserve your seats for all the games in advance.

Enjoy soccer games lakeside with a swim in Lake Biel at Seemaettli, Nidau, which expects 30'000 visitors over the course of the competition.

A beach atmosphere is promised at Beachstyle in Solothurn, which is creating a tropical location with sand, street food, and deck chairs in the weather-proof Allianz Arena.

The Rythalle Soledurn in Solothurn will have a large screen, a bar, and games. The SO geht Fussball event will offer free admission and a free beverage for all as part of the opening match on June 14! Doors open at 3 PM. In Rapperswil, the Switzerland matches can be viewed at the STARLITE Eventhall. Consult their website for a list of events. This is one of the region's largest venues which includes a beach and lounge area.

As part of the KULTURFESTIVAL in St. Gallen, the World Cup finale on July 15 will be broadcast on an outdoor screen. Admission is free.

The Lido in Ascona will have public showings of soccer matches, promising a spectacular backdrop of Lake Maggiore and the Alps.

For a more intimate experience, Ascona's Seven Boutique Hotel will be showing matches at the Jazz Ascona stage – as long as there’s no band playing, of course!

At the outdoor Public Viewing in Horn (between Arbon and Rorschach), enjoy the games in a lakeside atmosphere on a huge LED screen.

South-Beach is the aptly named World Cup Arena in Arbon at Lake Constance.

For those in the know, the Zeughaus in Uster is a local happening space. During this World Cup, they are promising to be bigger and better than ever - with more covered viewing spaces, food from around the world, and bigger screens.

A 60 sq m outdoor LED screen will dominate the Winti Arena in the Grosse Reithalle, which promises enough space for 3000 people. Tickets start at 10 francs including a drink, 20 francs with two drinks and a reserved seat, or 79 francs for a "Limited Edition" Season Ticket, guaranteeing entrance for every soccer game.

Six screens will be showing matches at the Mr. Pickwick Pub in Zug. Located next to the main station and sporting a large terrace, there will be beer specials and Guess the Champion competitions.

This one could not get any more central: There will be live soccer streams at Bauschänzli, a place that also knows how to BBQ and serve cold beer.

Fork and Bottle will be showing matches on five screens in their beautiful beer garden, with the upstairs area earmarked for bad weather.

Frau Gerolds Garten will be showing every single game on at least one of their 14 big screens. No matter the weather, go there for guaranteed live matches, beer, and sausages.

The Grain World Cup Lounge will be showing games on a projector for customers to watch from the terrace, with outside BBQ'ing and "intriguing" specials.

If you want to go all out for the World Cup in Zürich, Halle 622 offers space in the lounge or at tables of up to 10 people (790 francs).

The International Beer Bar will show all of the Swiss games and as many of the other matches from neighboring countries as possible.

At Kaufleuten Club, you can visit the public area free of charge. Screens will be outside in good weather, and food will be provided from the legendary Sternengrill. There will be games and music, too. Or, you can rent a private viewing area that promises luxury.

On the Turbinenplatz in front of Technopark, there will be a pretty big fan zone as well. There will be 2000 covered seats as well as 1500 standing only spaces.

In the town of Pfäffikon ZH, there will be a public viewing at the Chesselhuus community center.

Have you spotted the unofficial 2018 FIFA Soccer World Cup song by Vögele-Arena in Chur? It's called "Like A Sputnik":

Luc Benyon is a British writer and communications specialist based in Zurich. He has an unhealthy appetite for design and advertising history. 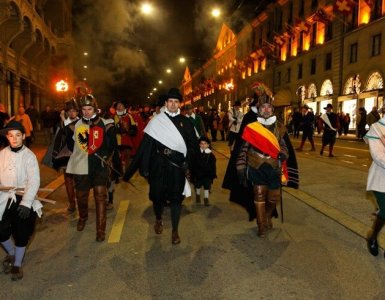 Each December, Geneva's residents celebrate the traditional Escalade Festival. But what is this historic festival all about? The holiday is dedicated to... Manage Cookie Consent
To provide the best experience, we use technologies like cookies to store and/or access device information. Consenting to these technologies will allow us to process data such as browsing behavior or unique IDs on this site. Not consenting or withdrawing consent may adversely affect certain features and functions.
Manage options Manage services Manage vendors Read more about these purposes
View Preferences
{title} {title} {title}
217 Shares
Share130
Tweet16
Share
Pin71
WhatsApp