After exploring the iconic architecture of Flims and Vals during winter, I returned to Grisons for more.

During one memorable summer weekend, I went upstream along the River Rhine to discover some remarkable works by Gion A. Caminada. Here is some of the best architecture I discovered between the towns of Valendas and Sumvitg:

Gasthaus am Brunnen in Valendas

I arrived in Valendas on a Friday afternoon and stayed at the Gasthaus am Brunnen, formerly named the Engihuus and dating back to 1517. It is located just next to the largest wooden fountain in Europe and was inaugurated in 2014, which makes it the most recent work of Gion A. Caminada I would be visiting this weekend. The new building complex designed by Caminada consists of old and new buildings. The restaurant is located on the ground floor of the completely renovated Engihuus. There are seven hotel rooms on the two upper floors, some of them in the older section of the building. 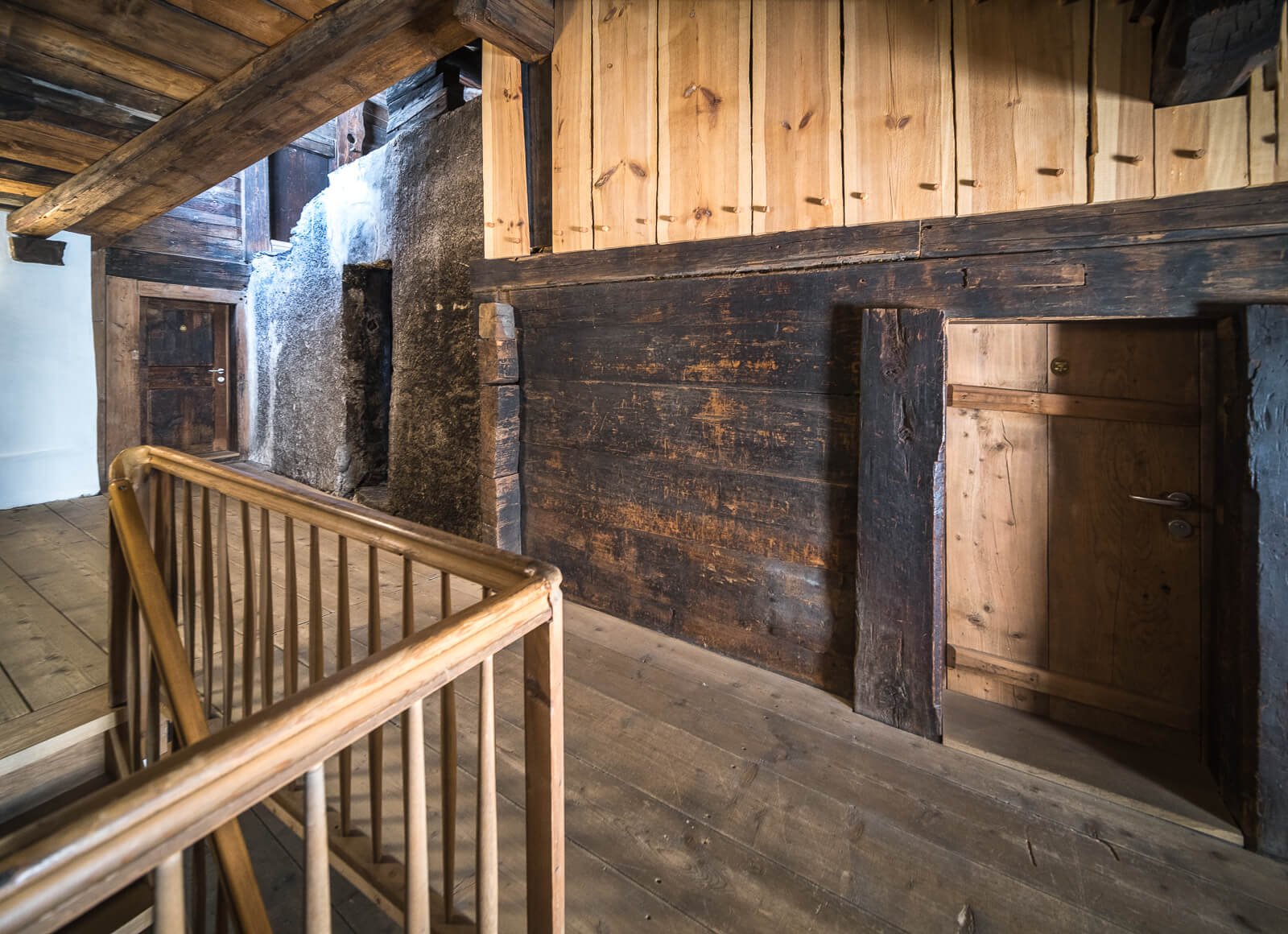 I found the staircase with its geometric window-like openings particularly interesting. And I would see a similar design in another building later this weekend... As for the dishes served at Gasthaus am Brunnen, I only have one word: spectacular. Its 15 Gault Millau points are really well deserved!

The next morning, I continued my drive to Vrin where Gion A. Caminada was born in 1957. Similarly to Peter Zumthor a decade earlier, Caminada trained as a carpenter, then attended the Kunstgewerbeschule before graduating from the Swiss Federal Institute of Technology in Zürich. He founded his architectural office in the late 70s in Vrin where he built several communal buildings and farming constructions. Vrin was actually awarded the Wakker Prize of the Swiss Heritage Society in 1998 for the development and preservation of its architectural heritage. Gion A. Caminada has been professor in Architectural Design at ETH Zurich since 1998.

Right next to the church is the Stiva da morts, a community mortuary building built by Caminada in 1996. In multiple ways, this building creates a connection between the church and the surrounding homes. Its light color reminds of the white color of the church.

Meanwhile, the timber construction reminds of the homes. It also connects the level of the cemetery with the village street just below. 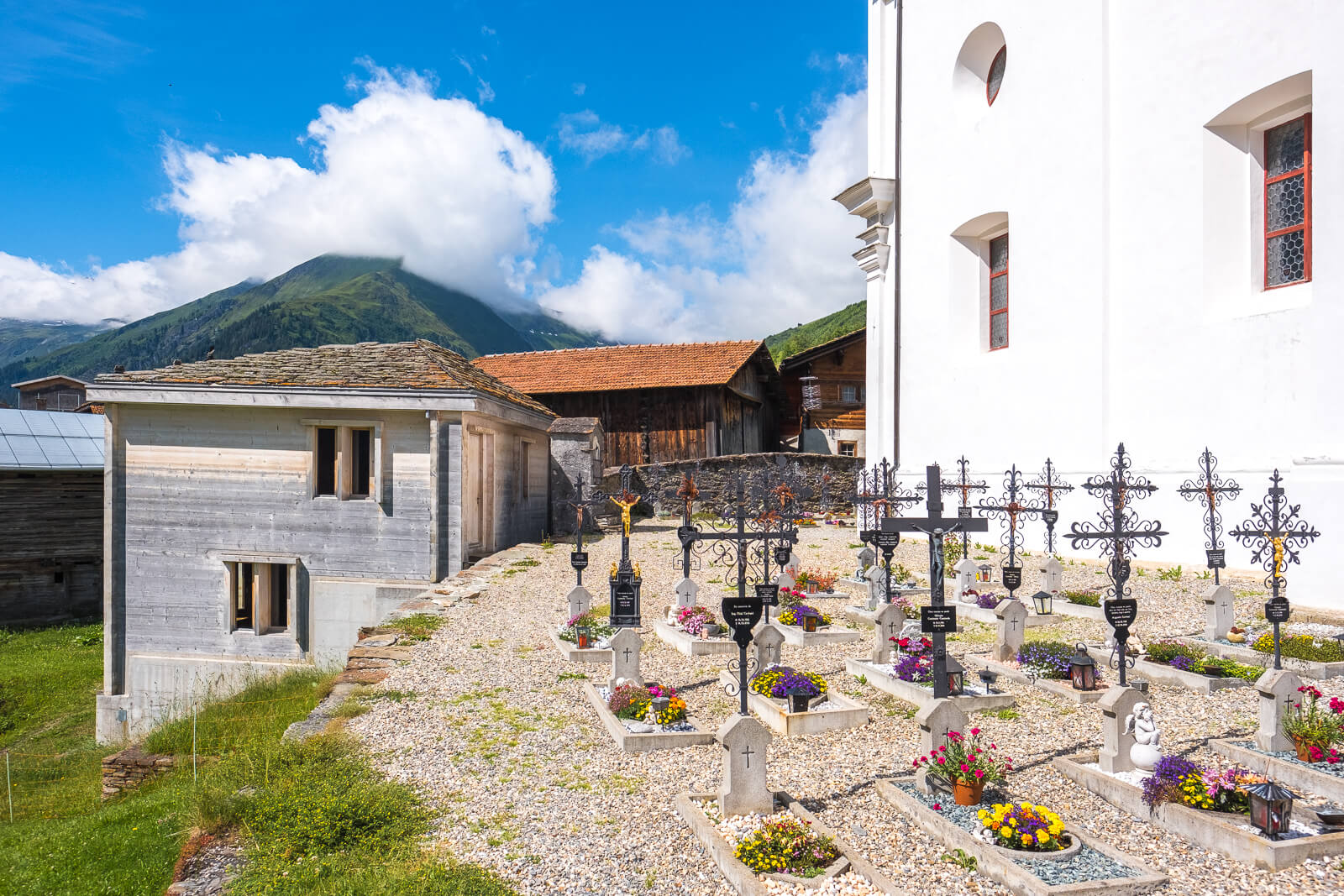 My next stop was in Trun, a small municipality of slightly more than 1000 residents. But actually, it has two very interesting modern structures: OGNA, the last work of Matias Spescha (1925 - 2008), is Switzerland’s largest sculpture with a length of 48 meters, a width of 30 meters and a wall height of 5.5 meters. 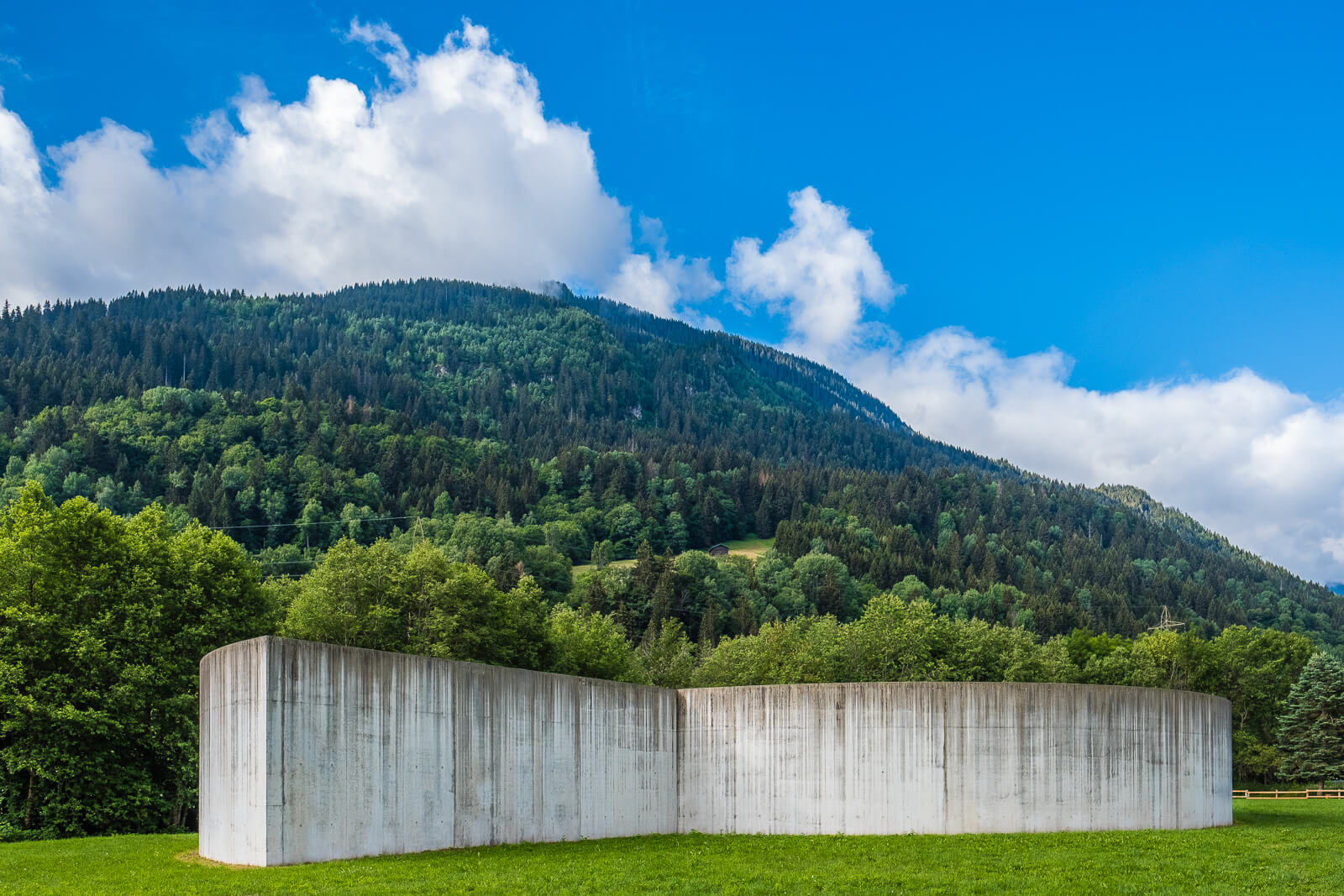 It was inaugurated in 2013 and is freely accessible day and night through a door-like opening in one of the walls. As for its name, Ogna is the plural of Ogn, the Romansh word for “alder”. It refers to the forest just next to it. Sitting inside this sculpture while the clouds passed by and the different elements casted ever-changing shadows was almost a meditative experience. My favorite perspective was the bird's-eye view, though: 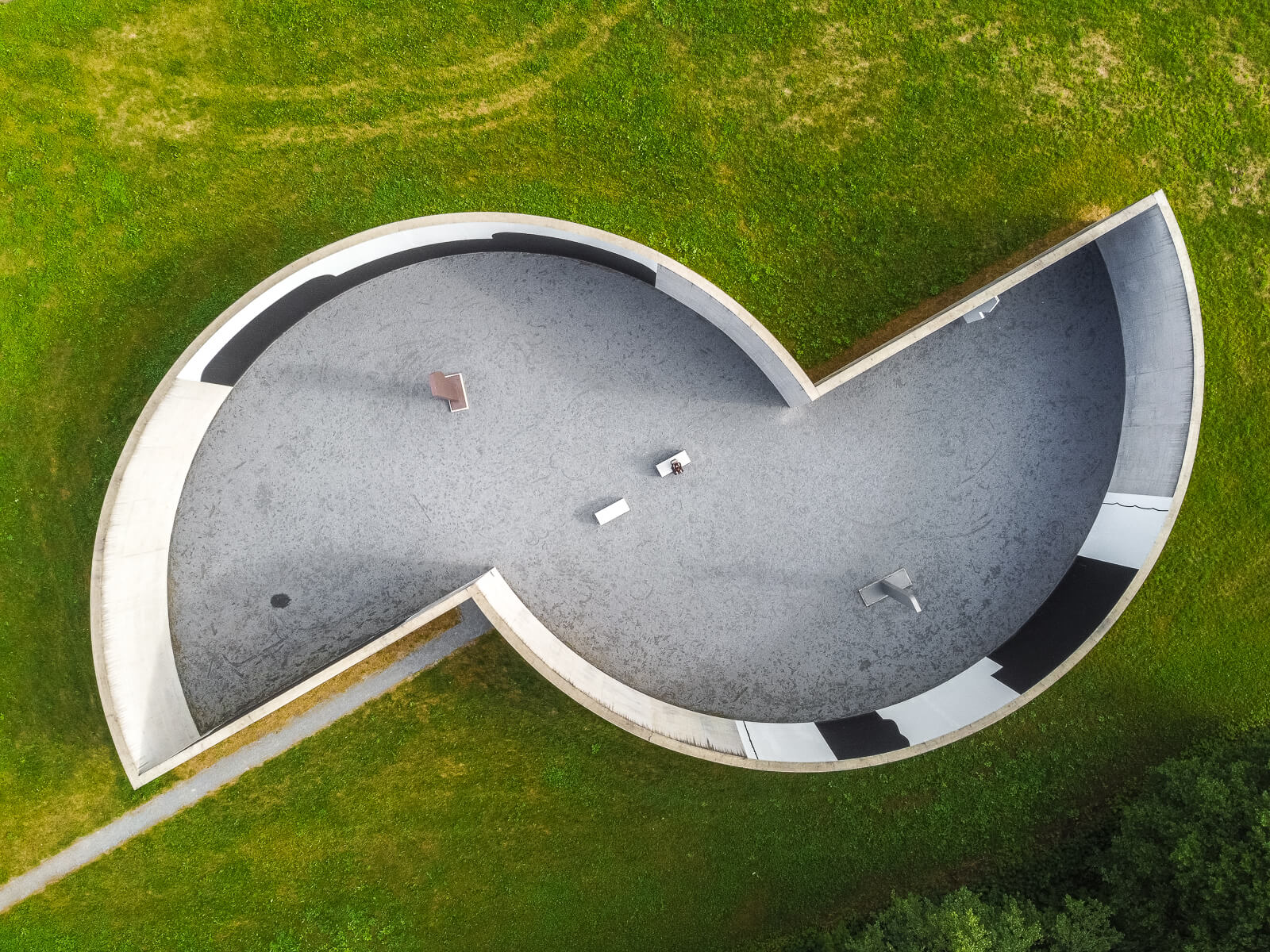 Less than a five-minute walk from OGNA is the Camping Trun campground where a new bathhouse, reception area, restaurant and building complex (Ustria Ogna) was constructed in 2016. Ustria Ogna was designed by Iso Huonder Architektur and won the Sonderpreis Graubünden Holz in 2018. I found the contrast between the dark wood outside and the very warm wood color inside really interesting. The Saint Benedict Chapel in Sumvitg

After an avalanche destroyed the baroque-style chapel of Sumvitg in 1984, Peter Zumthor's proposal of a minimalist drop-shaped chapel was selected to be built. The Saint Benedict Chapel in Sumvitg is located close to the original location, but protected from avalanches by the surrounding forest. Its exterior is completely covered in wooden shingles, similar to traditional houses of the area. 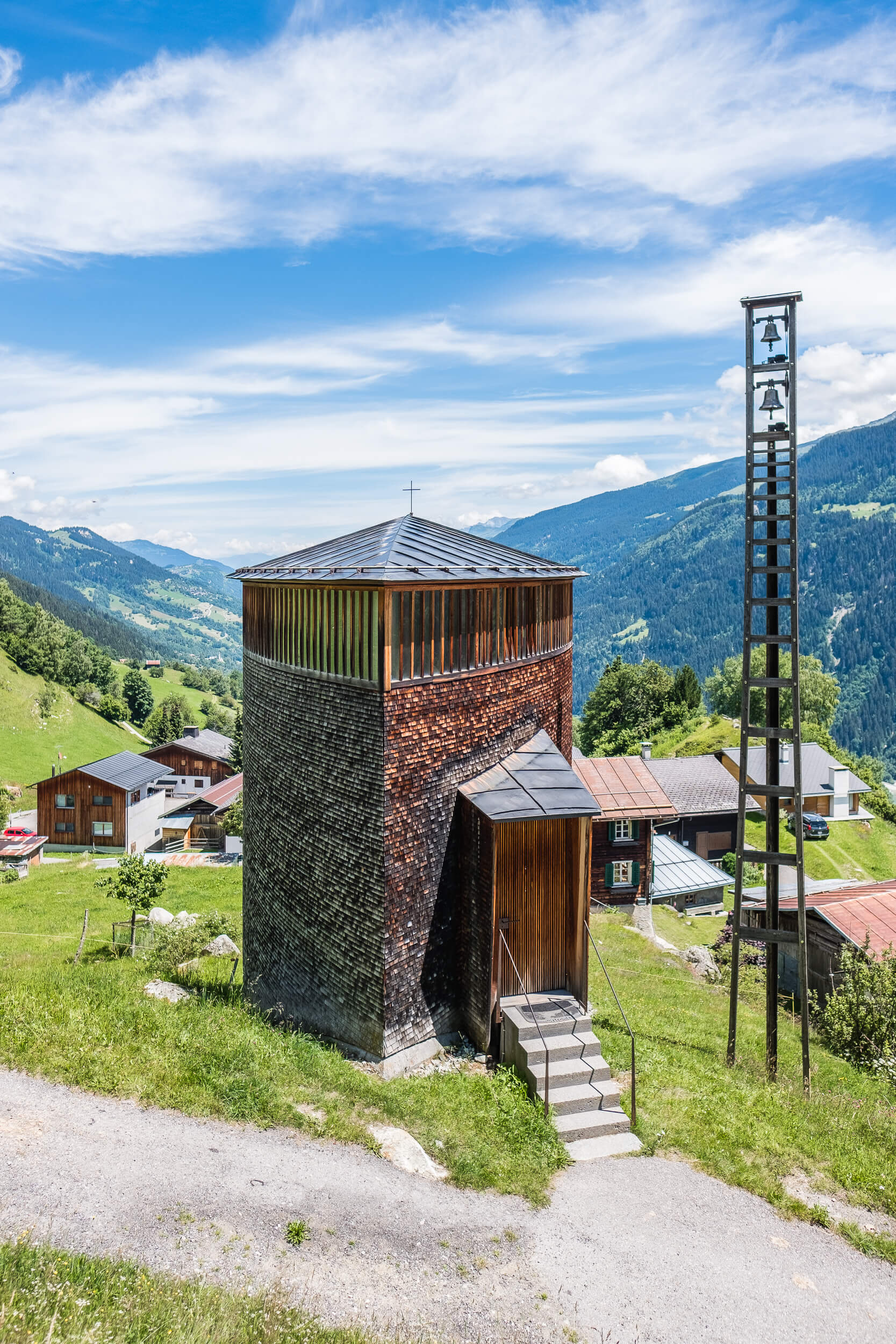 The upper section of the walls contains vertical glass panels that allow natural light to flow from above into the simple interior space. It is amazing to see how these wooden pillars are able to support the weight of the roof throughout the seasons. Stay tuned for my next post where I will be showing you more architecture from further down the valley in Disentis! Psychedelic Art by Lang/Baumann – Our Interview

Have you seen these psychedelic paintings on rural Swiss streets, bridges or tunnels? The street art of Lang/Baumann is a sublime experience... 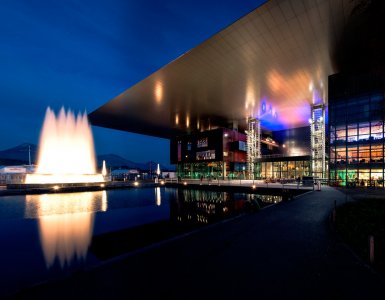 For many centuries, the townscape of Lucerne has remained unchanged. But with the opening of the astonishing KKL, the residents took a leap of faith. 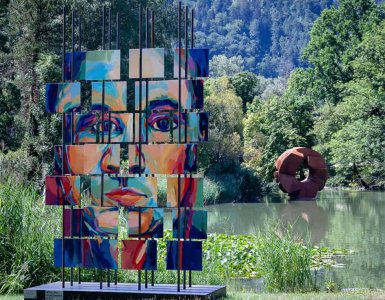 Every three years, the renowned spa destination of Bad Ragaz puts on a new face. This is your chance to experience more than 400 pieces of original art...

Manage Cookie Consent
To provide the best experience, we use technologies like cookies to store and/or access device information. Consenting to these technologies will allow us to process data such as browsing behavior or unique IDs on this site. Not consenting or withdrawing consent may adversely affect certain features and functions.
Manage options Manage services Manage vendors Read more about these purposes
View Preferences
{title} {title} {title}
34 Shares
Share30
Tweet
Share
Pin4
WhatsApp