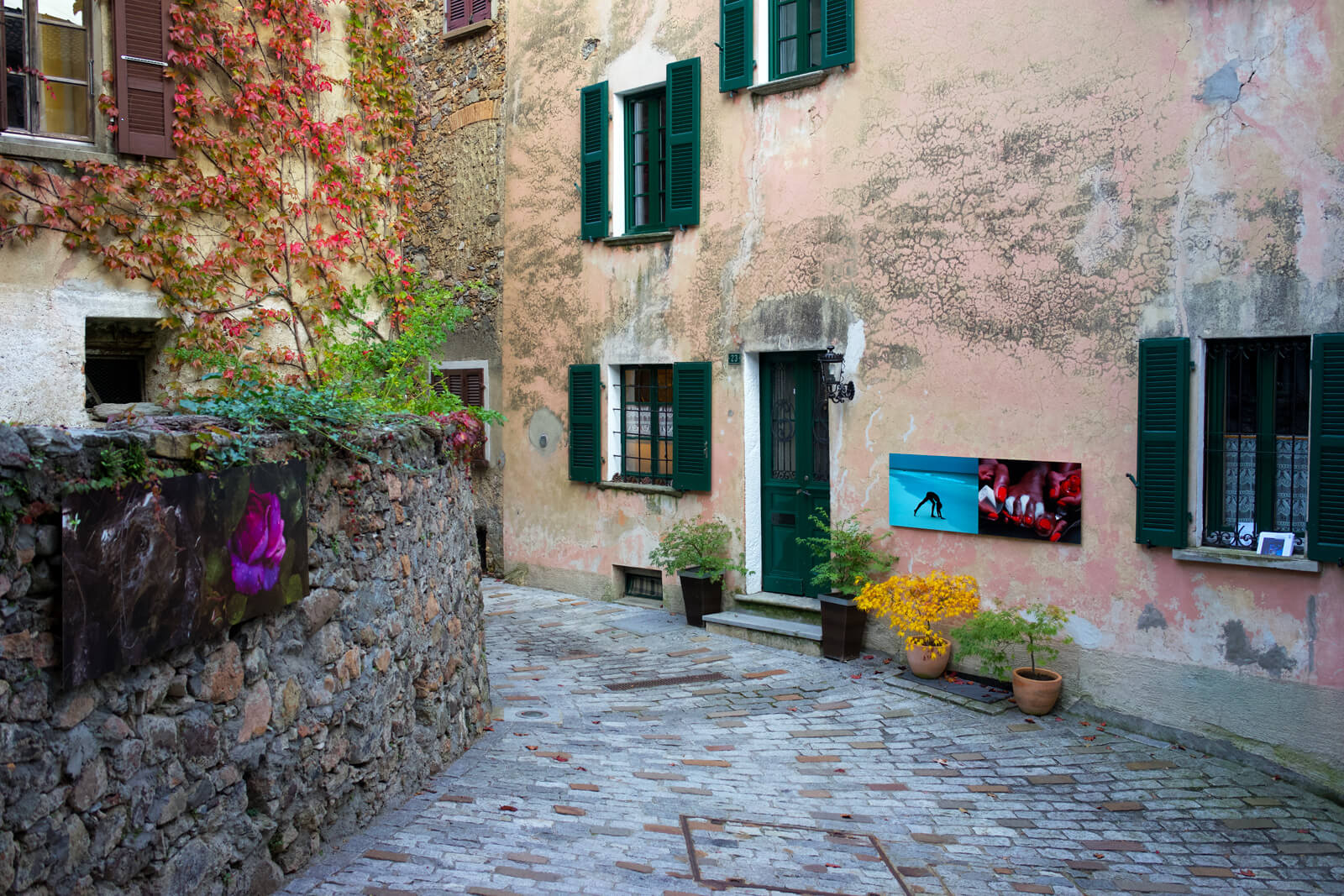 In the spring, I spent a busy weekend going through Lausanne's incredible offerings. In the summer, I spent a week at Art Basel, arguably the biggest art show in the world, along with its neighbors Photo Basel and the awkwardly named Design Miami/Basel.

I even ended the year by flying to the US to see the equally confusing Art Basel-Miami and Design Miami! (Seriously, they need to do something about the names.) But of all the amazing cultural events I went to, there is one that truly sticks out: the Carona Immagina open air photography show in Ticino. 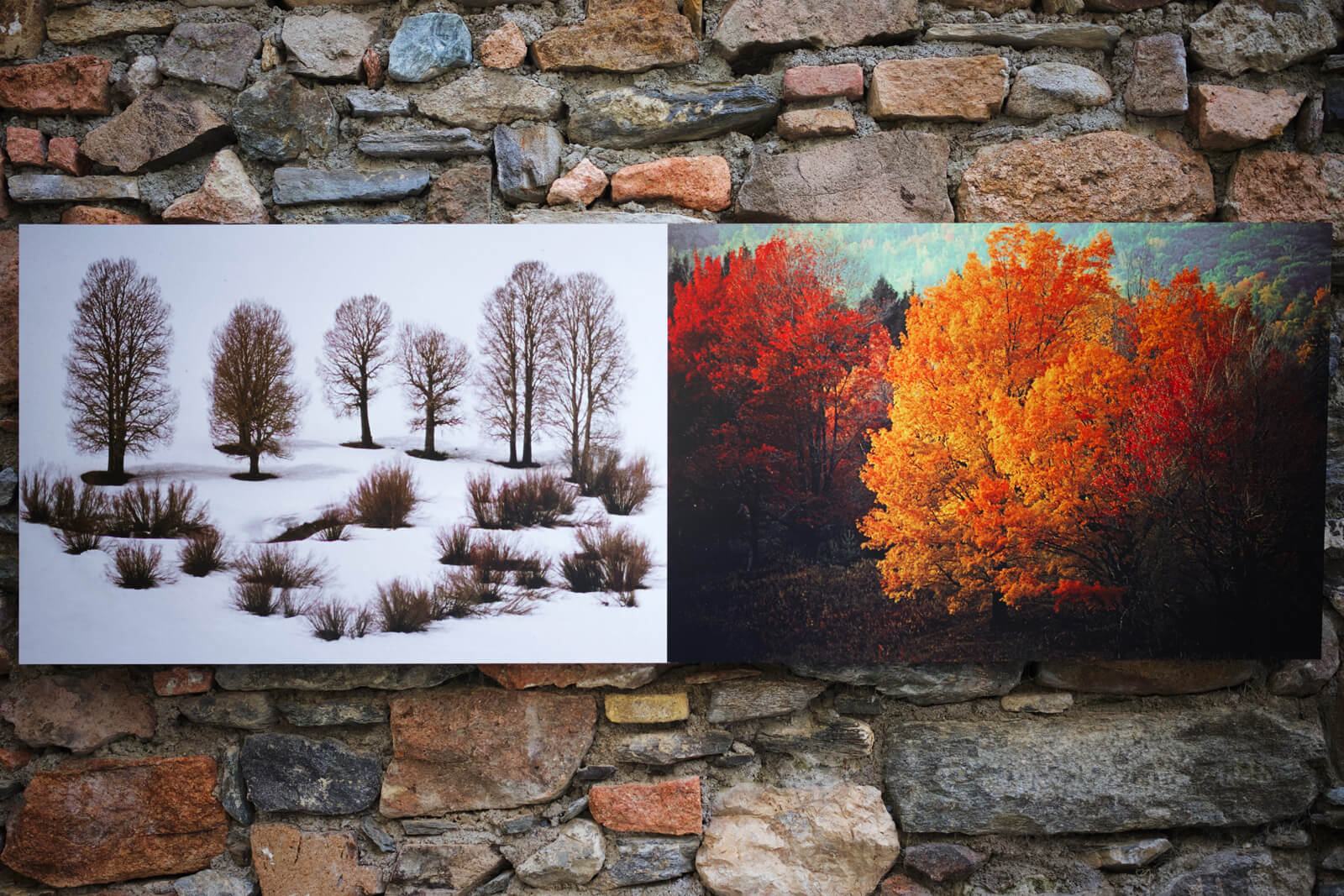 Despite having lived in Lugano for almost five years, I had never been to Carona, a small village nestled high above the city, behind Monte San Salvatore.

Carona is easily accessed from downtown Lugano by way of one of the yellow La Posta busses. Winding up narrow switchbacks, the 30-minute trip offers stunning views of Lugano, "San Sal," and the lake.

The Immagina 2019 photo walk in Carona

Getting off the bus, the first thing I noticed was how quiet it was. Gone were the cars and city noise; instead I could hear birds singing and children playing. Having arrived right at the golden hour, the peaceful, cinematically lit mountain village was a jaw-dropping reminder just how idyllic Switzerland can be, without even trying. 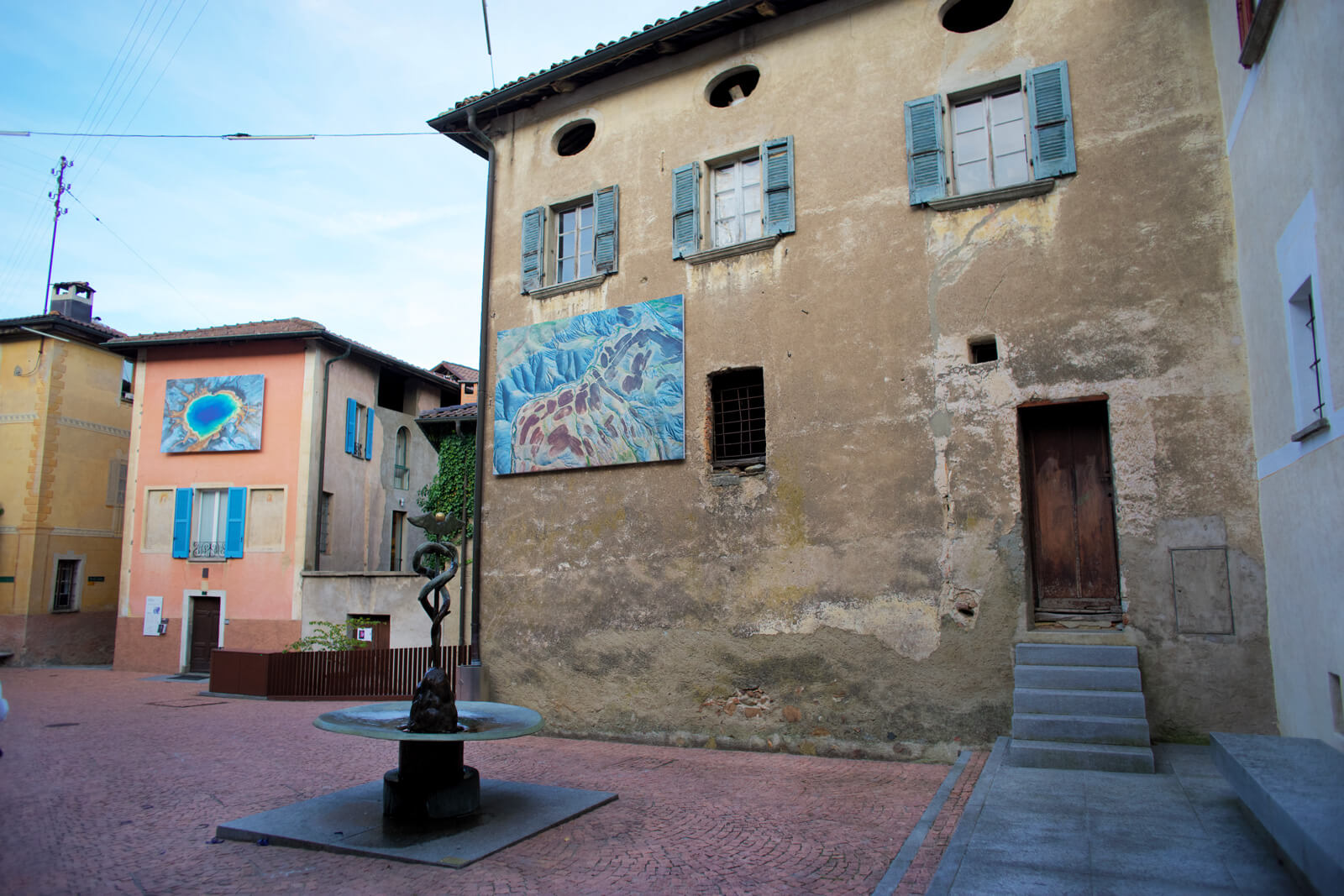 Walking towards the main square, Piazza Montaa, Carona's architecture is an interesting mix of colorful Italianate villas and traditional Ticinese mountain houses, made from local stone and wood.

An interesting feature were the external staircases and wooden walkways that connected many of the houses, making the village look like some sort of massive fantasy tree-house. Carona, like many Swiss villages, is not as populous as it once was. But the remaining residents obviously care deeply about their commune, as evidenced by the Immagina photo walk.

My guide to the show was Filippo de Fernex, the handsome, silver haired co-founder and curator of the show, who also happens to be Carona’s Vice-Mayor. As soon as he started talking, you could tell how passionate he was about Carona and photography.

2019 marked the second edition of the photo walk. It featured three photographers: Frank Horvat, Georg Gerster, and local Riccardo Comi. All the works were displayed outdoors, printed on large format metal boards which were mounted to the walls of the houses. A map provided the three routes visitors could take through the village to see each artist's work. Guiding us along each artist’s route, Filippo described some of the difficulties of designing and curating an outdoor photo exhibition for three different artists.

Frank Horvat, for example, required a special printing process for his work that only one shop in the world could produce. In another case, some locals did not want the photographs to be mounted on their houses, creating routing problems.

And then, of course, there was the difficulty of curating the exhibit, choosing which photos to hang where. In a museum, with controlled lighting and layout, this is already a thoughtful process. But imagine doing this outside, in narrow streets, on walls of stone or painted plaster surrounded by doors, windows, and plants of different shapes and colors. To their credit, Filippo and his team did a masterful job. For example, Swiss photographer Georg Gerster's colorful, geometric aerial landscapes were arranged according to the accent colors of their mounting spaces. A yellow field was hung next to a yellow door, and so on, creating a harmonious experience for the walker. It felt like each photograph and its village backdrop had been made for one other.

Filippo described each artist, including the story, techniques, and motivations. Georg Gerster had recently passed away, but his daughter was staying in Carona during the exhibit and joined us at the end of the tour. With a career spanning nearly 70 years, Horvat had touched pretty much every famous 20th century European photographer and his work showed the marked evolution of style, technique, and technology.

Along the routes were a few photographs from a photo class that Filippo had done at the local elementary school. It was delightful to see them mixed in with the professional artists.

As we walked, locals came out to wish us good evening, look at the photographs that were hanging on their houses, and chat with Filippo. His passion for photography, it turned out, was a lifelong pursuit, and something he had dabbled in professionally, despite an advanced degree in physics and an international career in business.

Now retired, he devotes his time to working for Carona, representing the town and developing their artistic programs, including a beautiful small museum in the main piazza. The photo walk came about as a way to combine his passion for photography in its various forms with his promotion of Carona as an artistic attraction.

My experience at the Carona Immagina photo walk was one of those times when everything just serendipitously comes together and creates an experience that is truly special.

The weather was perfect, the village was idyllic, the company was invigorating, the artists world-class, and the photographs both beautiful to look at and thought provoking. Thinking back on a year filled with art and culture events, Carona Immagina was without a doubt the highlight, showcasing a spectrum of modern and contemporary photographic talent and curated by passionate, knowledgeable people in a unique setting.

Carona is also a brilliant example of just how good a local art exhibit can be, even in a small, relatively remote community with only regional sponsors.

You can learn more about the 2019 edition of Carona Immagina here. I cannot wait to see what they have in store this year. It typically falls around the same time as the Lugano Autumn Festival, but the town and its museum are worth a visit year-round. 15 gorgeous photographs of Grindelwald in winter

When it comes to capturing the natural beauty of Grindelwald, there is only one name that comes to mind: Speedy Füllemann. Born and raised in this...

Urban Renewal – One LEGO Brick at a Time

Buildings in Switzerland are constructed to last for centuries. I don’t think this is too bold of a statement. But even the most sturdy building sometimes needs some tender love and care, which is exactly what... Did you ever wake up to the idea of publishing a 250 page print magazine within six months? This is what happened to the makers of Quottom...

Here are the six most Instagramable places in Nyon

Manage Cookie Consent
To provide the best experience, we use technologies like cookies to store and/or access device information. Consenting to these technologies will allow us to process data such as browsing behavior or unique IDs on this site. Not consenting or withdrawing consent may adversely affect certain features and functions.
Manage options Manage services Manage vendors Read more about these purposes
View Preferences
{title} {title} {title}
30 Shares
Share29
Tweet
Share
Pin1
WhatsApp