Cheese lovers, have you tried the new Emmentaler AOP URTYP? 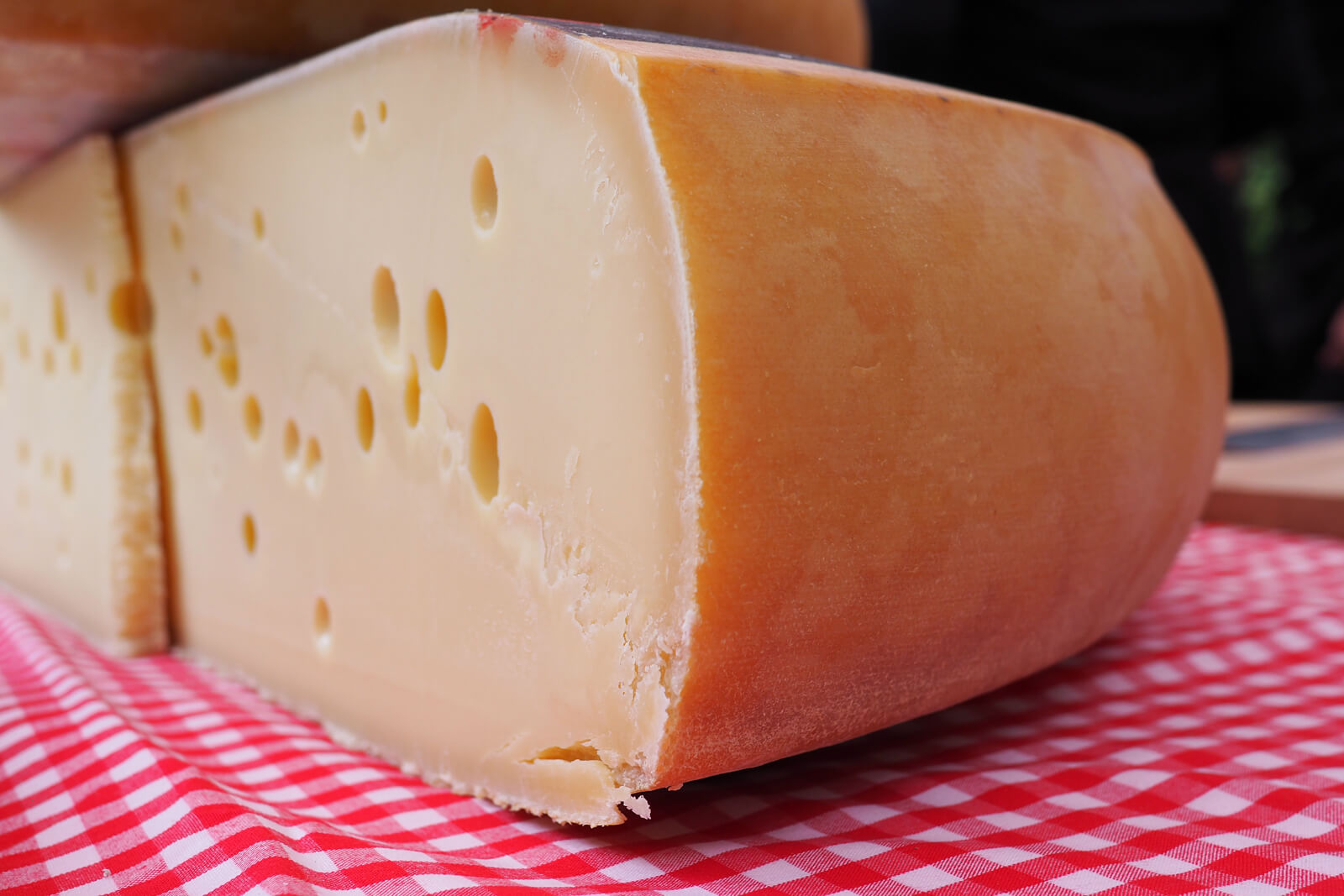 "Is there Swiss cheese in Switzerland?" I was asked this question more than once while living in the United States.

You see, American grocers sell a type of cheese commonly referred to as "Swiss cheese". It is close in taste to Emmentaler cheese. And so the question as to whether this type of cheese is available in Switzerland is rather legit. But as a cheese lover, I would cringe and explain the vast cheese landscape. And the fact that by pure definition, any cheese from Switzerland is "Swiss cheese..."

Many years later, my heart danced when I was invited to a one-of-a-kind press trip organized by Emmentaler Switzerland. They would launch a new type of Emmental cheese, and they were going to show me the secret location where the cheese has been ageing...

Have I mentioned that I am a cheese lover? Of course, I signed up! And so here I am at a river bank in the Kandertal on a fresh autumn morning. The cheesemakers have selected this spot out in nature to make a point about their newest innovation. It is where all the elements join forces: earth, water, fire, wind, and space.

Michelin-starred chef, Stefan Wiesner, brought his crew of sous-chefs to prepare our lunch. We have met Stefan before when he took us on a memorable hike through the moorlands of Entlebuch. Together with this amazing chef, we would gather moss, pine cones and other natural products for the night's dinner.

Here by the River Kander, Chef Wiesner is once again going to incorporate nature's elements into his menu. Chef Wiesner is cooking on open fire and serves everything from butter crumbles made of soil to one very rocky dessert... Bread made of charcoal served in a flower pot - delicious! Here is hay soup carefully served in a bed of hay: And for dessert, Wiesner gathered river stones to serve ice-cream made of: ground stone! 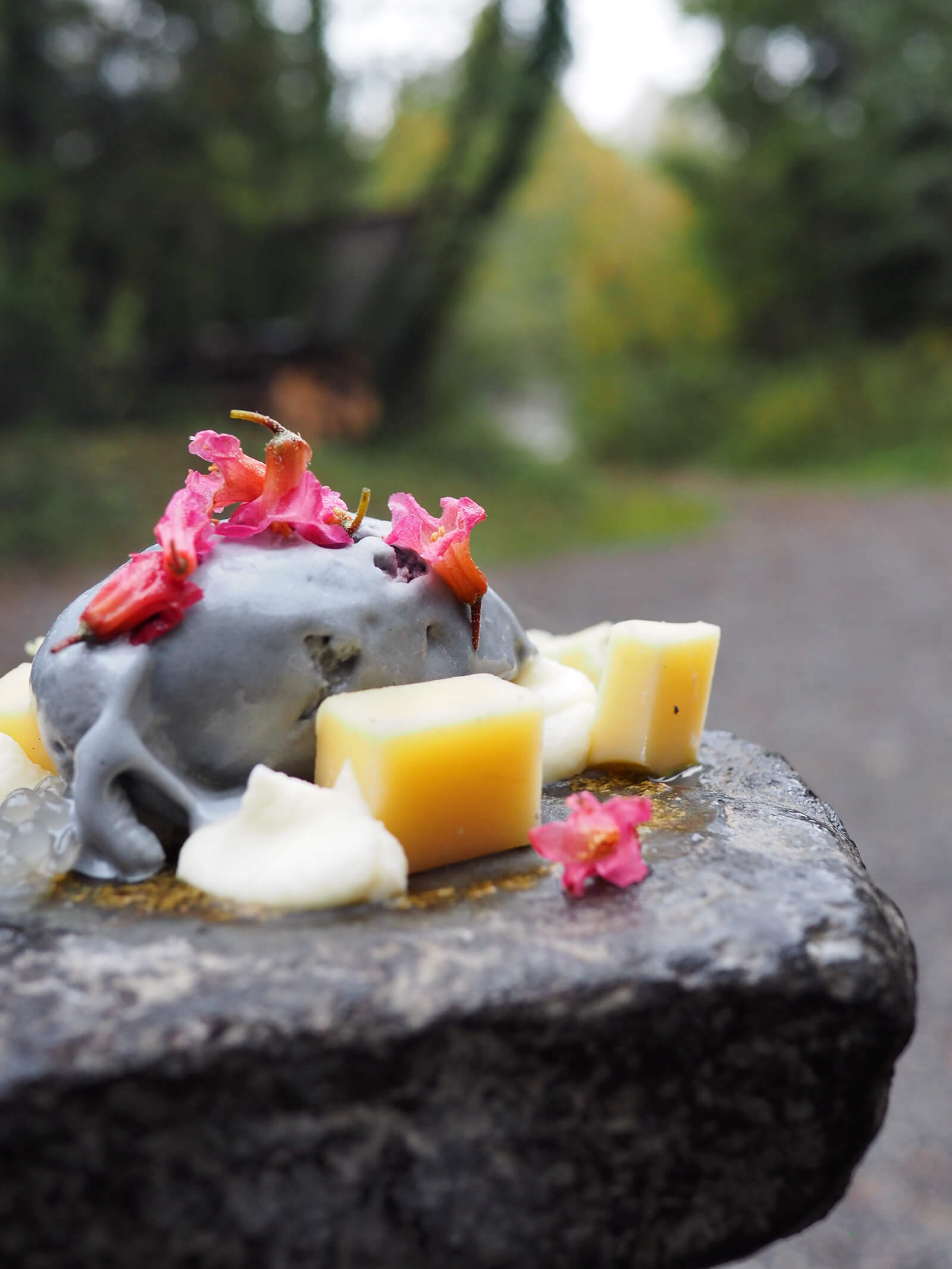 The key ingredient in each course? You guessed it: Emmentaler AOP URTYP cheese! Let me try to explain the taste: as you take that first bite, it hits you that this must be an Emmentaler. It has the consistency and typical aroma you know of a regular Emmentaler.

But then, as you slowly chew and the aroma unfolds, you realize that this Emmentaler has a stronger taste. You could almost say that the flavor is full-bodied and with extra character.

In the words of the cheesemakers, the Emmentaler URTYP is something of a revelation for the senses. Just like their other varieties, the URTYP combines ingredients stemming from the rough cliffs and rolling hills of the Bernese Alps. A dozen liters of fresh cow milk go into each kilogram of cheese. And despite exclusively using natural ingredients, only the most premium wheels can get the "URTYP" seal of approval.

After ripening for 10 or 11 months, a jury will inspect the wheels of Emmentaler cheese to see whether the development is progressing as normal. As one of the quality control managers puts it, "mould that looks like an English lawn is ideal."

Several additional factors are being scrutinized by the jury: the holes (duh!), the texture of the dough, the taste and aroma, as well as how well the wheel can be stored. After another three to four months of ripening, the jury assembles once again in order to determine which cheese wheels can be sold as Emmentaler URTYP.

After five or six months of ripening in smaller cheeseries, Emmentaler wheels are loaded onto trucks and carted to a remote valley in the Bernese Alps. Here at Switzerland’s Area 51, a company called Gourmino runs a gigantic cheese warehouse. When we arrive at this secret location, all I see is a metal door presumably leading into the mountainside. And sure enough, a key is turned and the door springs open! A long and brightly lit tunnel leads to a changing room where I am asked to put on a protective coat and an Emmentaler cap. For obvious reasons, hygiene and the prevention of any outside substances entering the cheese warehouse are of utmost importance. We are guided through a series of tunnels right out of a James Bond movie. One hallway has pallets loaded with blocks of raclette cheese. Truly, I am surprised how modern and sparkling clean this former ammunition storage bunker is. (I was expecting some kind of dimly lit cave.)

Any finally, there it is: one of several warehouses deep inside the mountain. Rows upon rows of wooden shelves are stacked with loaf upon loaf of Emmentaler AOP URTYP cheese. 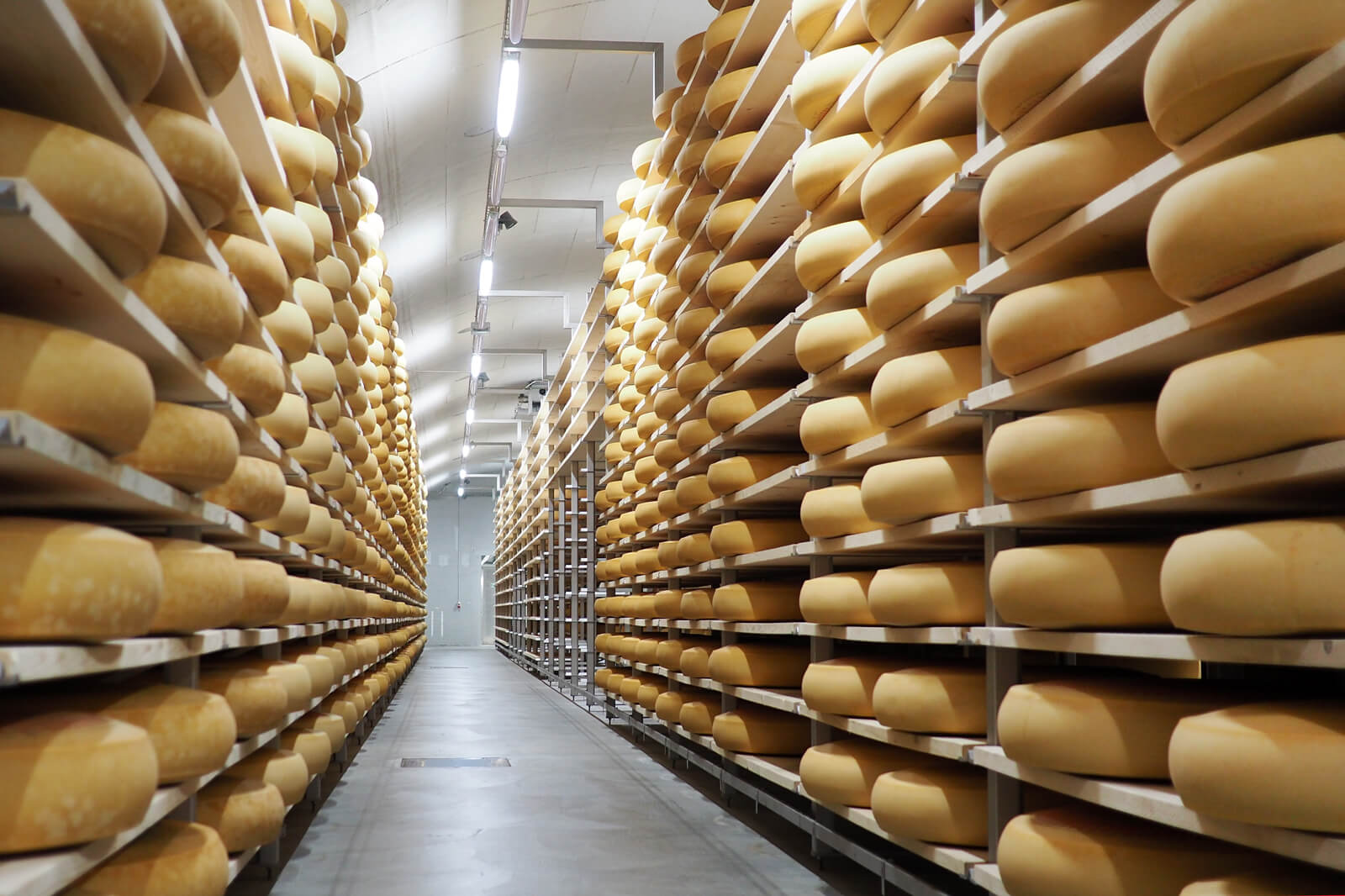 Nicklaus Haldeman, the cellar’s manager, is in charge of monitoring salt levels of each batch of cheese. Also, he operates the four cheese robots (for the lack of a better term). Day and night, these high-tech robots take one loaf of cheese at a time off the shelf, clean and brine it.

And with each loaf weighing about 100 kilograms, it is a good thing these helpers never moan! 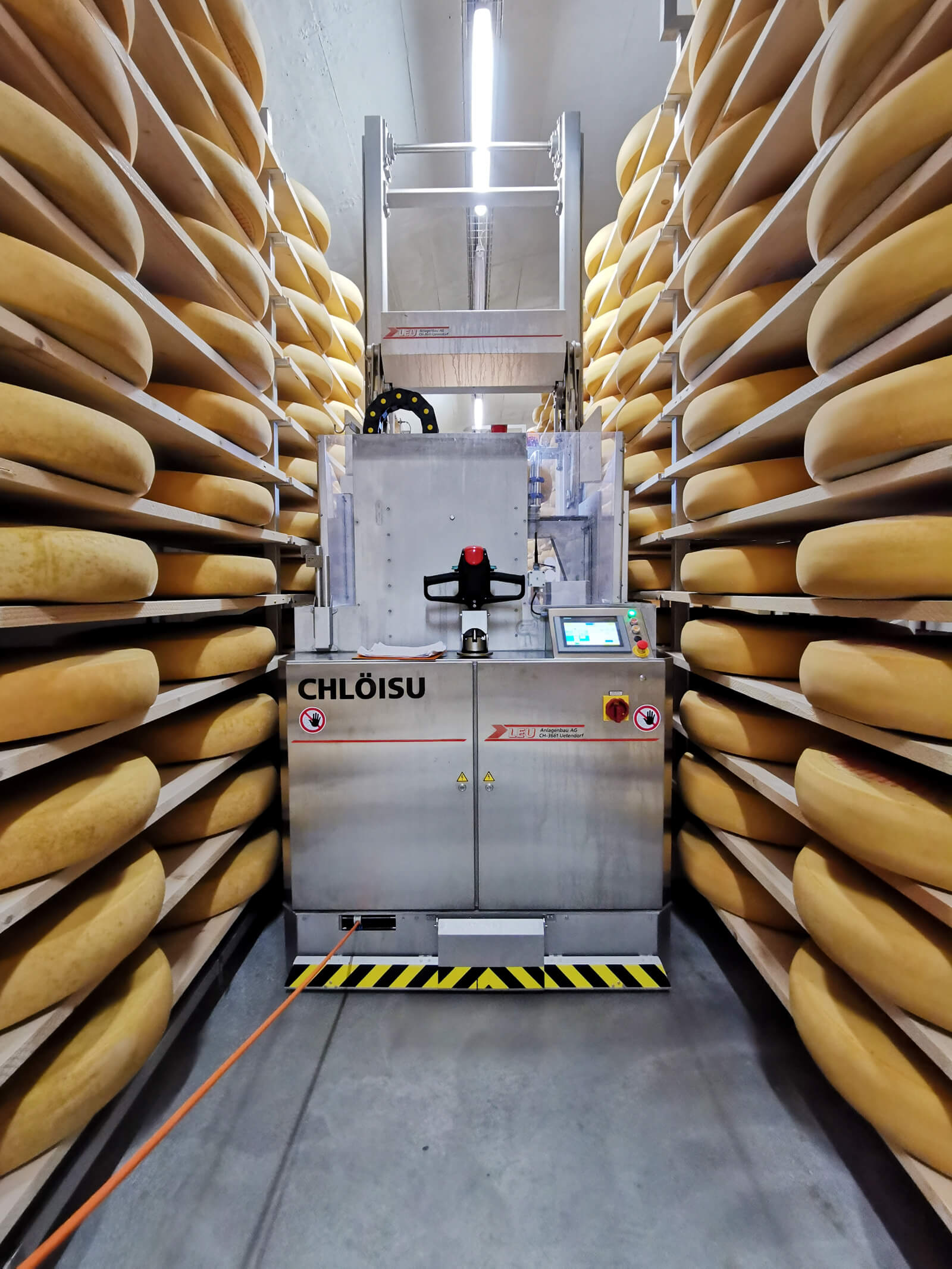 Emmentaler AOP URTYP is available at Coop supermarkets or at Coop@Home in Switzerland. Have you visited the Emmentaler Show Dairy yet? It is highly recommended for any cheese lovers... Participating in the Festin Neuchâtelois means to be feasting for hours on a four course meal highlighting local products from the canton of Neuchâtel... 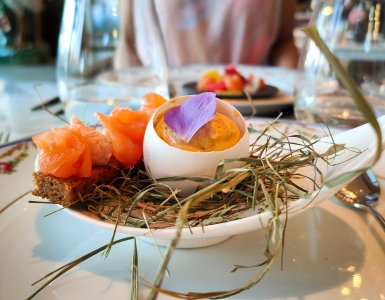 We find the Grand Hôtel du Lac in Vevey ideal for a weekend getaway. From views to culinary treats, it's a grand hotel with boutique flair. Manage Cookie Consent
To provide the best experience, we use technologies like cookies to store and/or access device information. Consenting to these technologies will allow us to process data such as browsing behavior or unique IDs on this site. Not consenting or withdrawing consent may adversely affect certain features and functions.
Manage options Manage services Manage vendors Read more about these purposes
View Preferences
{title} {title} {title}
63 Shares
Share59
Tweet
Share
Pin4
WhatsApp