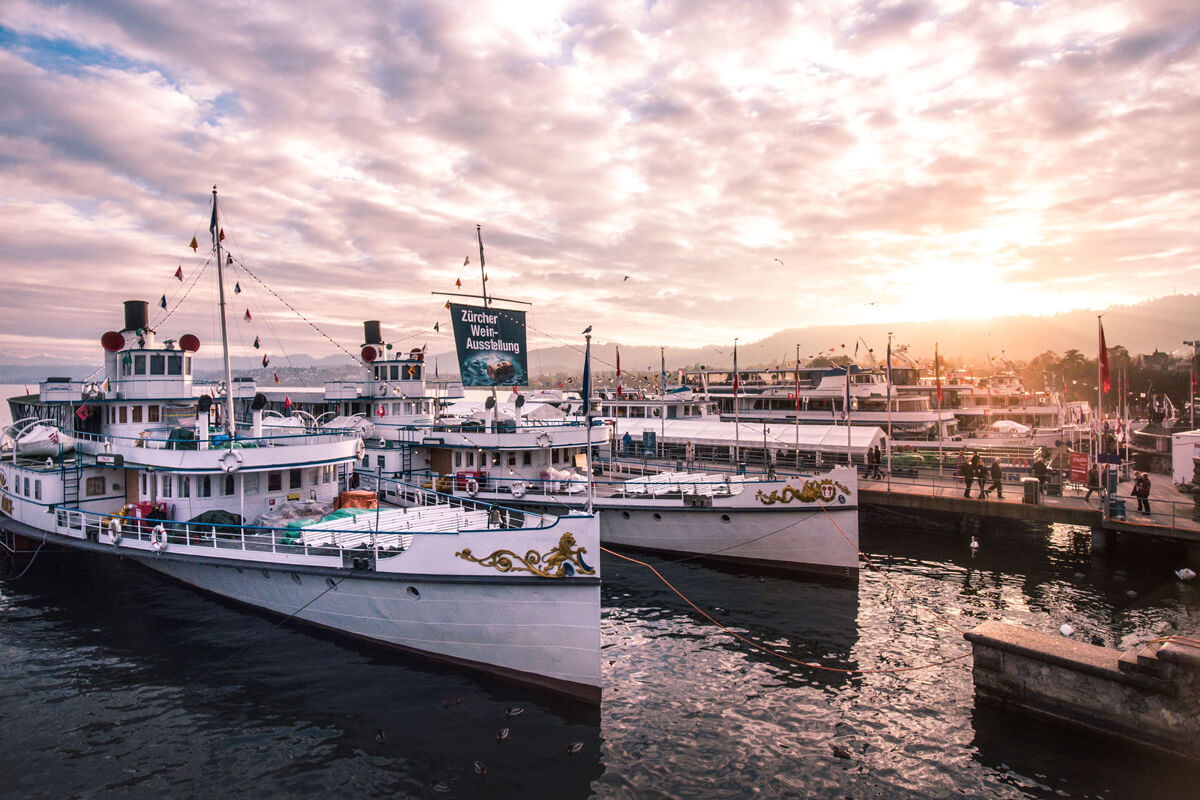 It is the time of year when a dozen boats are docked at Zürich’s Bürkliplatz. The occasion is the annual EXPOVINA wine fair which features more than 4000 distinct vintages.

The organizers of the world’s largest wine fair open to the public (!) could not have picked a better setting, because Zürich’s lakeside is most magical during late fall. For the next two weeks, the charming Belle Époque boats will be attached together and lit up like a circus tent.

On board, no less than 120 different Swiss wine makers are looking forward to present their best vintages to the public. Among the 4000 wines on offer, 1500 are from Switzerland while the rest are from all significant wine regions of the world: Italy, Spain and Portugal, but also Argentine, Chile, Australia, New Zealand and South Africa. All major regions of California, USA, will also be represented. Some lesser known regions such as Croatia, Peru or Uruguay are also represented.

The idea is to purchase an all-inclusive pass at the entrance of the fair. (You must be at least 18 years of age.) The admission price of 25 francs includes unlimited tastings on the EXPOVINA boats. Once you enter the fair, you could take a look at the catalog and come up with a mini strategy: Which region are you most interested in? Alternatively, simply go with the flow and follow your nose from one boat to the next.

Since EXPOVINA has been around for longer than most people can remember, the locals have come up with their own name for this staple event: Wyschiff. So if you are thinking of organizing a night out with a couple of friends, dropping this code word will do the trick…

When it comes to Swiss wines, Provins is the single most prominent producer. They are an especially strong player in the Valais where 20 percent of wines are sold under the Provins label. To put this into perspective, Provins is responsible for vineyards equivalent to the area of 1120 soccer fields. At the Provins booth 213, you have the opportunity to taste award winning wines such as the 2012 Clos Corbassières or the winner of this year’s EXPOVINA competition for the best Valais wine. Here is a list of vintages available for sampling.

What are you waiting for? Join us on board EXPOVINA and visit Provins on the Helvetia boat at booth 213!

Manage Cookie Consent
To provide the best experience, we use technologies like cookies to store and/or access device information. Consenting to these technologies will allow us to process data such as browsing behavior or unique IDs on this site. Not consenting or withdrawing consent may adversely affect certain features and functions.
Manage options Manage services Manage vendors Read more about these purposes
View Preferences
{title} {title} {title}
259 Shares
Share248
Tweet1
Share9
Pin1
WhatsApp