The other day, I read an article about Tesla Motors and how this exclusive brand is doing a great job of selling an exclusive product to the general consumer (like Apple Computers). The article made me think of a recent interview with Hans Georg Hildebrandt, the founder and producer of Gents tonic water.

Tonic water, electric cars and consumer electronics: Let's connect the dots. All three products exist in markets that have long been established by other brands. Before the second coming of Apple, Microsoft and the PC dominated personal computing. The internal combustion engine was (and remains) the centerpiece of the auto industry, but will hopefully soon be sent into obsolescence by Tesla and the electric engine.

In terms of tonic water, Schweppes has dominated the market for more than 200 years, but independent producers are finding their niche.

You can't go wrong with a G&T Visit Frau Gerolds Garten in Zürich West, and you will see stalls serving gin and tonic exclusively. G&T, as it is called by many admirers, has worked its way back onto center stage.

Where whiskey once dominated, gin is taking over, and even the manager at Glen Fahrn has been surprised by just how many people are looking for specialty gins.

Small batch specialty gins are popping up like mushrooms, and a few people have realized that a handcrafted gin needs an artisanal tonic water.

The Right Man for the Job 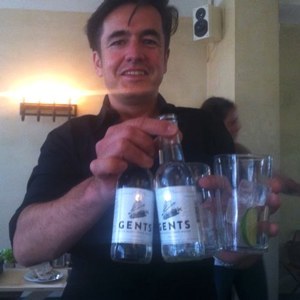 Food writer and publisher Hans Georg Hildebrandt is one of those men with a vision. Late one night, or rather early one morning after a party, he jokingly told his friends that he would love to produce his own tonic water. Upon sobering up, Hildebrandt realized that the idea was not half as dumb as one might have thought when he first uttered the words.

He set about coming up with a recipe and looking for a production facility. When Hildebrandt spotted a restaurant in the Zürich Oberland which makes its own sparkling water with a hand operated carbonator, he thought that would be a great idea. However, the costs were too high and the production capacity too low. Having an exceptional palate and a background in food writing, Hildebrandt set to work with his friends in the food and beverage industry to create a new and distinctive tonic water.

Patrick Zbinden (known for his keen senses), Ralph Schelling (a young and talented chef), and Markus Blattner (Chef de bar in the Hotel Widder), along with Hans Georg Hildebrandt decided that the tonic needed to be much less sweet than traditional tonics. The three main ingredients that give Gents its distinct and subtle flavor are:

Getting funding from the three F's ("friends, family, and fools"), Hildebrandt found a place that would produce the tonic in Austria. However, poor production quality made him ditch that idea after the first order, a "painful and disillusioning experience".

When he was able to work over professional connections to bring production to Switzerland, the Zürich tonic took off. At present, approximately 40'000 bottles of Gents tonic are produced every quarter.

During summer months, production is stalled due to the water being too warm for optimal carbonation. Finally, Hildebrandt continues to tweak the recipe and is working on a new drink for long drink aficionados... Thanks in part to luck, as gin and tonic was in trend, and also to his connections in gastronomy, Hans Georg Hildebrandt was able to get his tonic into bars and restaurants. The old adage holding true that behind every great man stands a great woman, Hildebrandt’s wife, Nina Thoenen, is also a vital player in this story.

A graphic designer by trade, Nina, who also runs the agency Beling Thoenen Design, designed the label and marketing of the tonic. The brand beckons forth a bygone era of an imagined technological 1890's, and makes a subtle play on the currently sought-after "steampunk" esthetic. It is, in fact, the albatross seabird from Jules Verne’s The Clipper in the Clouds. A classic drink deserves a memorable label, and these little bottles can be proudly displayed in your bar or at your next cocktail party.

If you are a drinker of premium handcrafted gins and other spirits that mix well with tonic water, Gents is the ideal mixer. Its light effervescence and delicate flavors will highlight those found in your gin - and make them sing. Gents is a premium and affordable tonic water that should definitely grace your home bar.

A Tip from the Expert

Ask Hans Georg Hildebrandt how he likes his G&T, and he will tell you he likes the small batch gin Monkey 47 from the Black forest with Gents, Hoshizaki ball ice and a shaving of grapefruit peel.

You're all set for Prosit, as they say in Zürich! Corippo in the Verzasca Valley is a town - as well as a hotel. Switzerland's first scattered hotel is a truly unique concept.

As we leave the retro American diner near the river, I reminisce about all the other times I tried to find what I’m looking for. “I just don’t understand,” I tell my husband while finding our way back to the car. “This... 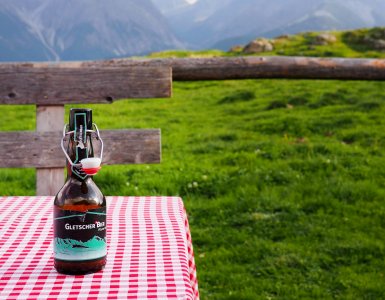 Riesling Week is Coming to Switzerland