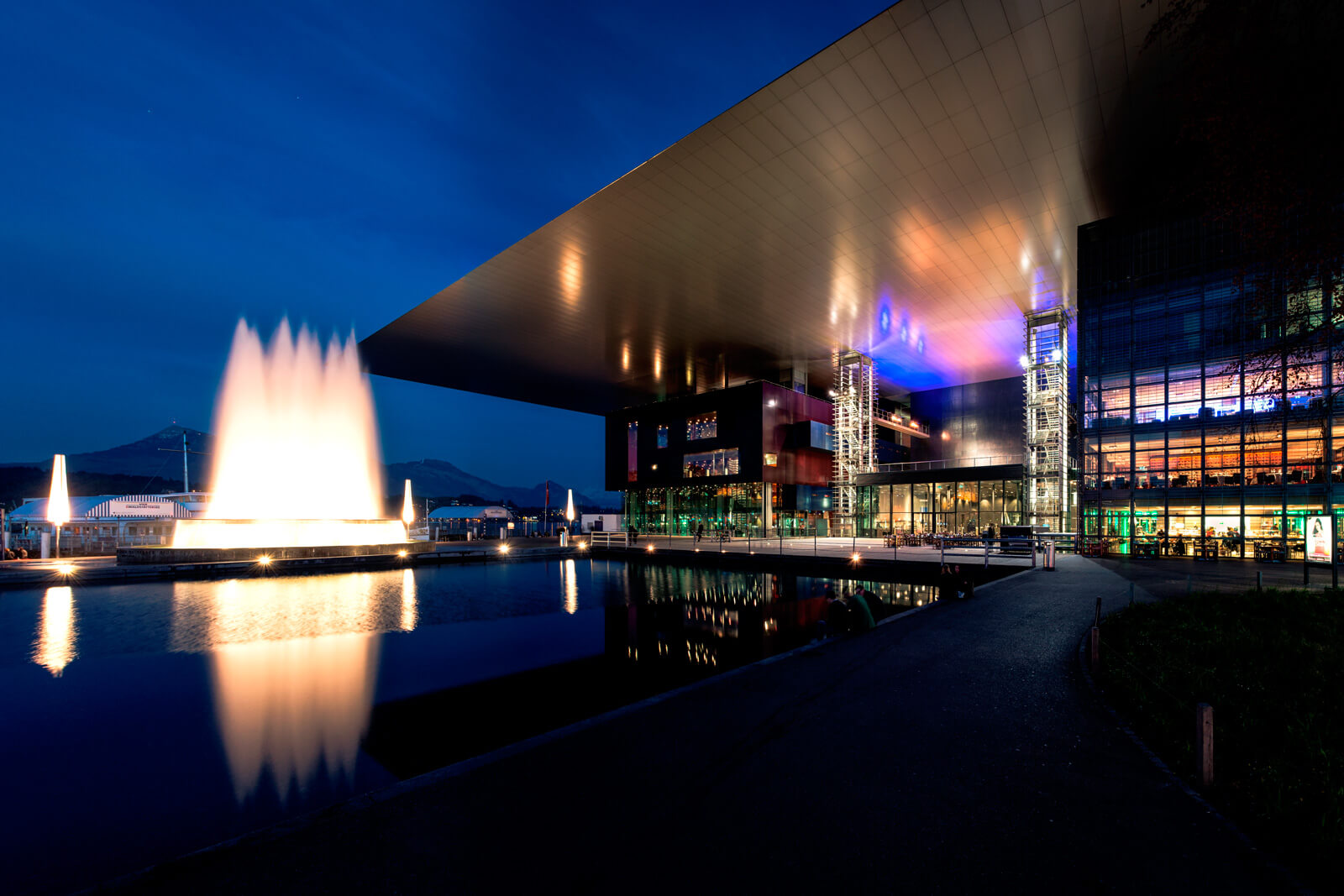 Lucerne is best known for its historic old town with those scenic mountain backdrops. I recommend this town to first-time visitors to Switzerland - it simply has it all.

For many centuries, the townscape with its River Reuss and the iconic Chapel Bridge has remained unchanged. But with the opening of the KKL Lucerne, the residents took a leap of faith by introducing modern architecture into their town.

And with a bang, Lucerne turned into an international hotspot for culture. From classical concerts to movie screenings with live orchestras, the KKL Lucerne Culture and Congress Centre have become a veritable hub for audiophiles. You might enjoy "Pirates of the Caribbean" one weekend with live tunes. And the next weekend, there might be a concert for the Chinese New Year.

Some history of the KKL Lucerne Culture and Congress Centre

On the site of the current building, there used to be a congress center built in 1933 by the Swiss architect Armin Meili. By 1980, the structure had deteriorated. And so, in 1988, the city launched an architecture competition for a new center.

The project of Parisian architects Jean Nouvel and Emmanuel Cattani, won the competition in 1989. However, it would take another five years before the project budget was approved.

Faced with a series of referendums, Nouvel had the vision to involve the community rather than dominate them. And by making Lucerners a part of their new culture center, the 94 million Swiss franc construction budget was approved by a majority in 1994.

Now, you might be wondering what "KKL" stands for... KKL is short for the German name of the building, Kultur- und Kongresszentrum Luzern. It translates to “Lucerne Culture and Convention Centre.”

About the architecture of the KKL

From the site of the KKL Lucerne, you can see the city’s luxury hotels across the lake. In front of the majestic entrance is the historic Wagenbach fountain, a structure I only really paid attention to when I returned to KKL to research this article.

The architect first envisioned the building as a ship going into the lake. This was not feasible, so he tried to bring the water to the building. While standing outside the front entrance under the roof (which reflects the lake), I could feel what he was trying to achieve. There are channels leading underneath the building, quite literally bringing the water in. 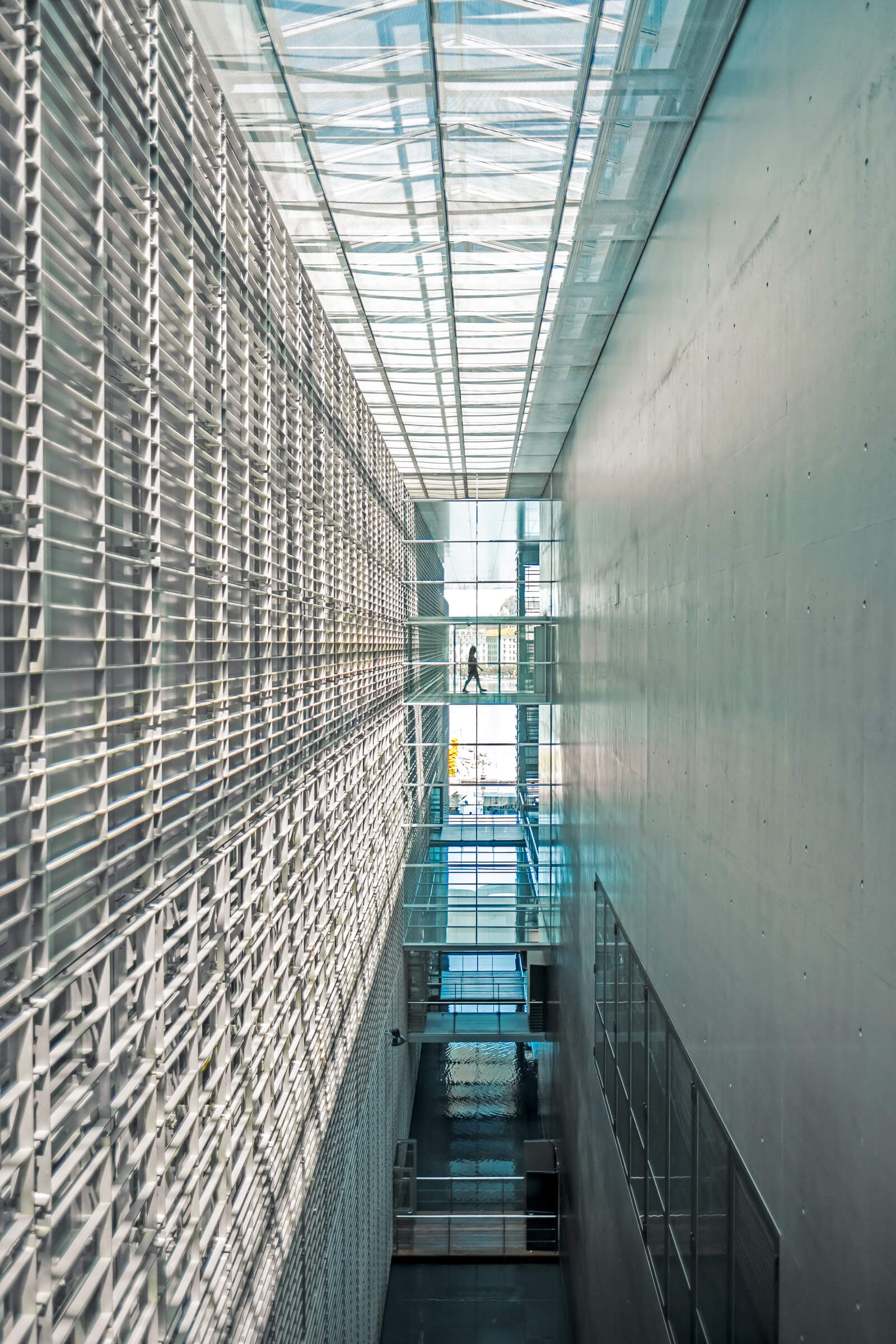 The location of KKL could not be more convenient. It is adjacent to the Lucerne train terminal, making public transport the smoothest way for concertgoers. You simply exit the station and walk towards the right until you are underneath the giant flat roof covering the entrance area.

This roof extension is what makes the KKL architecture so unique. I read somewhere that the architect aimed to purify the minds of those arriving for a cultural event, thus creating a blank slate or neutral state of mind for what is to come.

Our photographer, Dominik Gehl, suggests using a wide-angle lens to capture the KKL. "Overall, it's a building with very strong lines, so bringing them out in the photos would be my main tip." To fully appreciate the floating roof, venture to the opposite side of the lake and look across. The contemporary architecture flawlessly blends in with the horizon, respecting the historic nature of Lucerne without dominating it. The KKL provides a peaceful atmosphere and has become a new landmark of Lucerne. 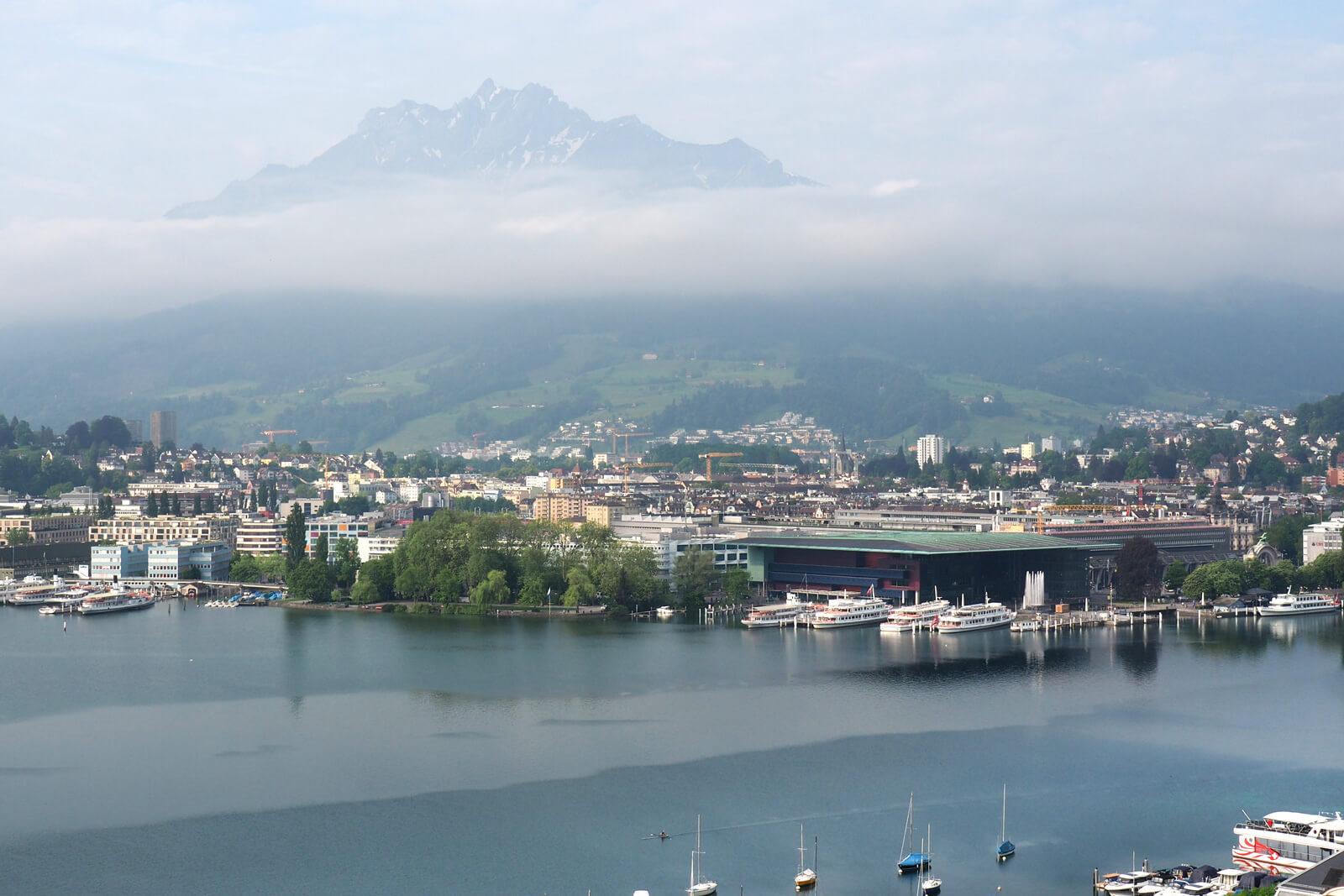 The KKL Luzern concert hall has been created mainly for classical music performances. Inside this 1300-square-meter hall, there is space for an audience of up to 1840 people seated on five floors. What stands out about the concert hall is the use of the color white on its wall panelings. The acoustics are world-renowned, a fact I can confirm from my experience. The architect worked with Russell Johnson, an American acoustician. The expert was quoted as saying that the KKL concert hall represents a culmination of his 40 to 50 prior constructions, putting the best of everything into one space. Johnson’s ultimate aim was to design a space perfect for any kind of music, ranging from the Middle Ages to modern times.

Apparently, there is even a special air circulation system to quench the slightest noise and create an atmosphere of complete silence.

At the center of the KKL Lucerne building, there is a multipurpose room aptly named Lucerne Hall. It is commonly used for congresses or festivals as its mobile walls can be arranged to cater to various requirements. In 2006, the KKL won the prestigious "Best Congress Location in Switzerland" award.

Located on the fourth floor is the Museum of Art Lucerne. It is regarded as one of Switzerland’s most significant collections of contemporary art, showcasing both local and international artists. Here, architect Jean Nouvel has intentionally created another blank slate, a series of neutral exhibit spaces that allow the art to stand out. My advice: during concert breaks, go up to the outdoor terrace. From this vantage point just underneath the roof, you will have some of the most unique views of Lucerne. 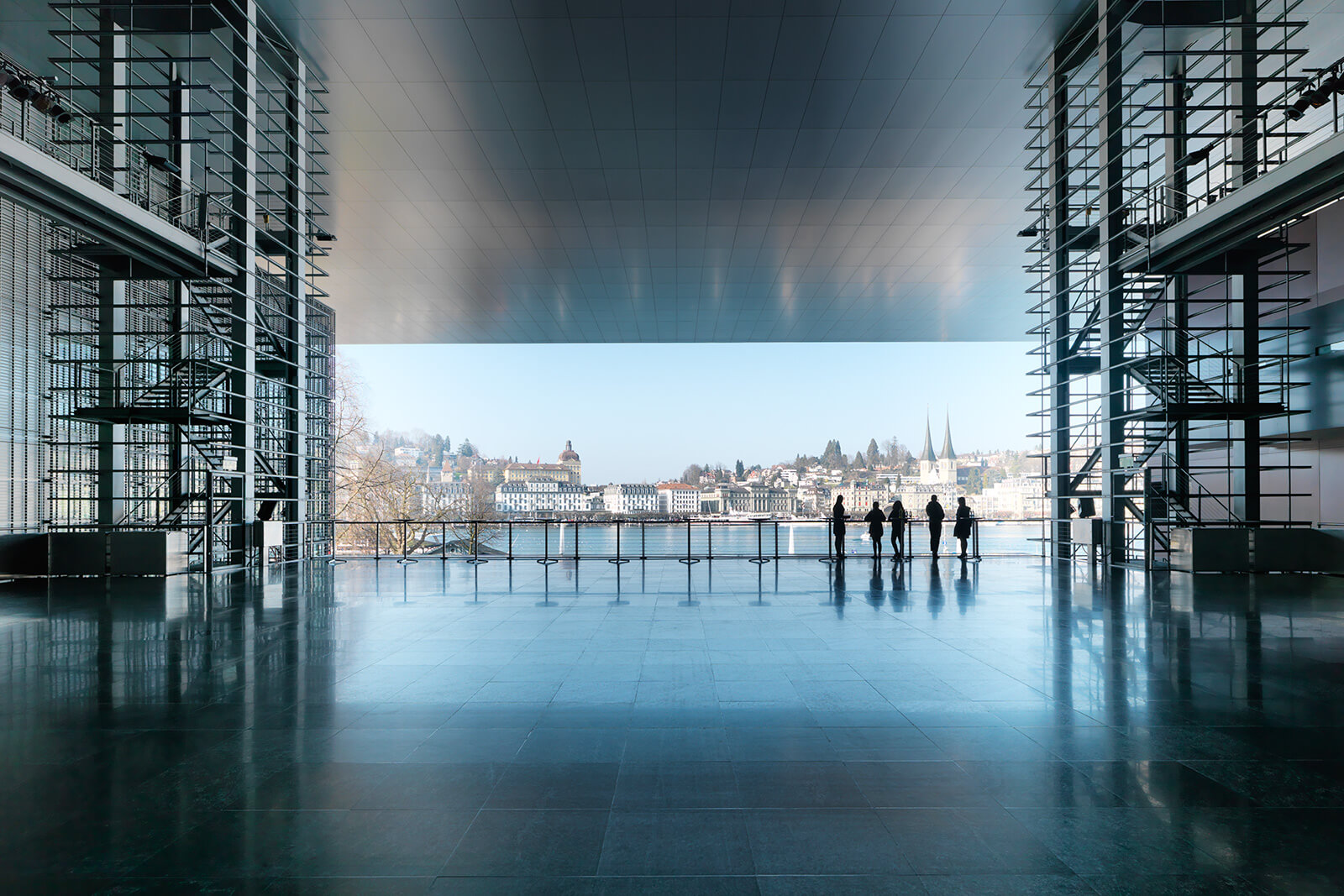 The International Music Festival on August 19, 1998, marked the opening of the KKL. The event has since been rebranded to the Lucerne Festival, an annual four-week long summer festival.

While the KKL concert hall serves as a sort of headquarters, the Lucerne Festival happens in close to 100 venues throughout the city. The concerts cover a wide range of tastes, from the obvious classical to contemporary music.

As part of the LUCERNE FESTIVAL ACADEMY, young international talents exclusively perform music from the 20th and 21st centuries. In order to reach the public, here is a festival format I really like: “In the Streets” is an outdoor music festival in Lucerne’s old town. Think brass bands, flamenco or Balkan music: each summer, eight international bands will paint their notes onto Lucerne's historic old town.

This year, the Lucerne Festival will be taking place from Aug 8 through Sept 11, 2022. Some more highlights from the KKL Luzern Program 2020

On February 8, 2020, the City Light Symphony Orchestra will be taking the audience to Hollywood. The Hollywood in Concert - Movie Heroes format is all about our favorite hero sagas. From Batman to Indiana Jones and Star Wars, this is the time to put on your cape and feel like a superhero...

From May 28 to 30, the film music of James Bond will be performed. Sure, there is the iconic opening track we all know so well. Personally, I would buy a ticket just to hear Tina Turner's "GoldenEye" theme - or Adele’s "Skyfall"...

On June 6, 2020, the KKL concert hall will host A Night at the Opera. This musical experience is a “best of” Italian opera classics, ranging from Giuseppe Verdi's "La Traviata" to "Madam Butterfly" or "La Bohème".

Check out the full line-up of the KKL Luzern Program 2020.

Take a guided tour to see behind the scenes of the KKL Luzern (15 francs, 1 hour, request an English speaking guide). Better yet, combine the tour with a lunchtime concert, several of which are scheduled for 2020. This wooden house in Switzerland sits inside a concrete box

It's Swiss architecture at its best: The architects have quite literally placed a box made of larch wood inside a massive concrete block... 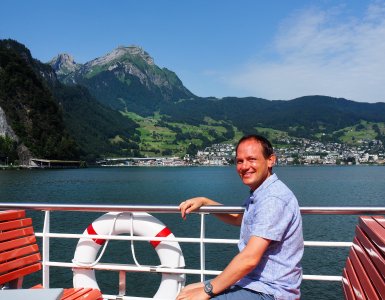 As one of Switzerland’s top museums, the Swiss Museum of Transport attracted more than 850’000 visitors in 2017 – that's roughly five visitors...

Manage Cookie Consent
To provide the best experience, we use technologies like cookies to store and/or access device information. Consenting to these technologies will allow us to process data such as browsing behavior or unique IDs on this site. Not consenting or withdrawing consent may adversely affect certain features and functions.
Manage options Manage services Manage vendors Read more about these purposes
View Preferences
{title} {title} {title}
157 Shares
Share141
Tweet3
Share
Pin13
WhatsApp