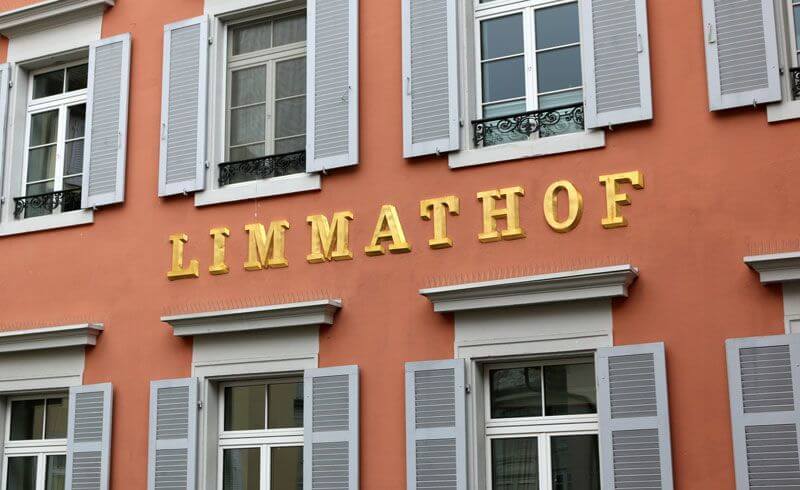 Baden's reputation as a spa town has not appeared overnight.

The most prominent hotel along the riverbanks of the Limmat, the river connecting Zürich and Baden, is the Limmathof Baden Spa & Hotel. Thanks to the best location in Baden's spa district, we had no trouble locating it after our afternoon picnic at Museum Langmatt.

The various riverside hotels have a long tradition of providing health treatments thanks to 18 mineral rich water sources. In fact, Baden has been a hotspot for healing spa treatments since Roman times – no pun intended! Mineral rich waters are spewing out from mindboggling depths at a constant 47 degrees Celsius.

Someone asserted us that Baden's much desired H2O is sometimes referred to as "liquid gold", which probably shows its economic significance to tourism. It has allowed hotels and guest houses to flourish for centuries.

Originally a modest guest house, the Limmathof Baden Hotel & Spa is now rated a solid four stars. As we step foot on the marble floors in the hotel lobby, the rich past becomes apparent and we are convinced that the fourth star is a tribute to the hotel's history. 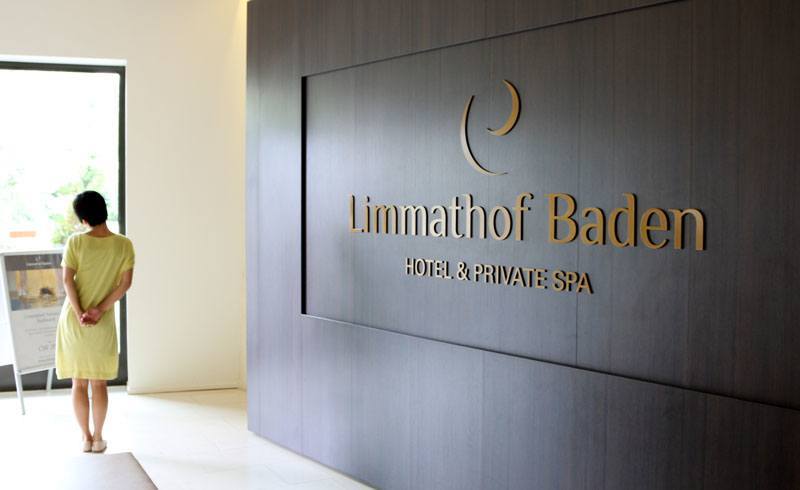 Roman Baths at the Novum Spa

Our hotel has its own water source, which was tapped back in 1828. And yes, the water flowing out of our suite's faucets would be pristine – no need to crack open the minibar! But while like a hot bath, 47 degrees Celsius would be too hot to bare!

Fortunately, we learn that the Novum Spa cools down the water in the Roman bath to a comfortable 36 degrees. Comfortable, it was, because we end up spending the better part of an hour soaking like the Romans did.

After an extended round of relaxation, dosing, and simply observing the raging Limmat river outside, we would run out of spa time. But one thing is for sure: We are going to return on a rainy weekend to try out the steam bath and Finnish sauna. 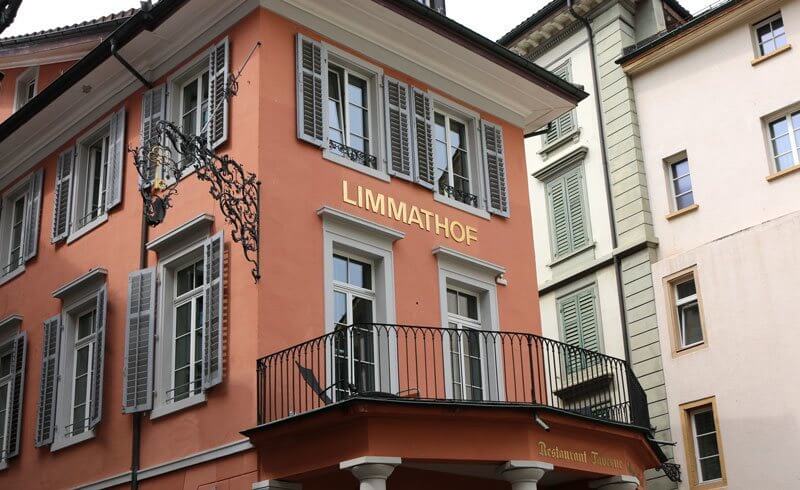 Our Junior Suite at Limmathof Baden

A pleasant surprise is awaiting us upstairs: A Junior suite with a private terrasse facing the old town! Unfortunately, we arrive on a rainy day so the terrasse is off limits. Anyone staying there on a sunny day, however, might decide to spend the entire day without ever leaving the suite. Our room is extremely spacious and has a lofty feel. It essentially extends from one side of the building to the other, with windows on three sides. The shower is partially separated from the bedroom (and thus the windows) by a translucent glass panel. 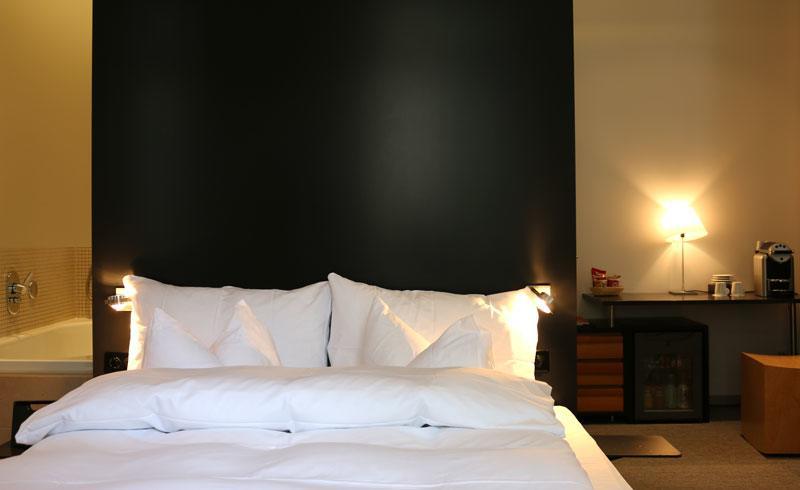 Thus, it really pays to have those curtains drawn while taking a shower... Thanks to the relaxing spa treatment earlier in the day, yours truly sank into a deep sleep in those soft linens at Limmathof. Crossing the Limmat for Brunch

By Sunday morning, the rain has stopped. After a quick stretch on the terrasse, we walk across the bridge to the hotel's sister house, the Limmathof Baden Hotel & Private Spa. A sort of modern pendant to the traditional guest house, this property houses the restaurant where the daily brunch buffet awaits. 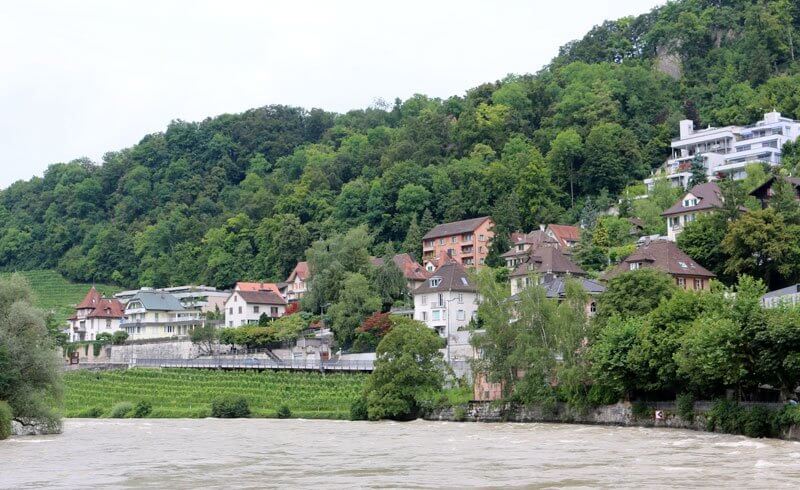 Compared to the original Limmathof property, the new build is very modern. The buffet is decked with delicacies such as freshly baked Zopf bread, cheese, deli meats, and an apple sauce from heaven! When it comes to weekend brunches, Mamiko likes her omelettes to get the day started. She was not disappointed this time... Possibly the only minor downside of the brunch experience is that the restaurant is strictly for hotel guests. While this policy makes sense in terms of logistics, the restaurant sits in a perfect location for pedestrians. We feel sorry for a young couple who was denied service when they step in to place an order. Our weekend at the Limmathof Baden was truly soothing, and so we drive off knowing that this was not going to be the last time we would bathe in the Roman baths.

It may sound cheesy, but it is true: When in Baden, do as the Romans did! (For the purpose of this review, a Kulturpicknick package including one night at this hotel has been generously offered by Baden Tourismus.) On the Trails of Swiss Chocolatier Suchard in Neuchâtel

Where in Switzerland can you find minarets with brilliant gold domes and a connection to the early years of Swiss chocolate-making? Neuchâtel and Suchard... 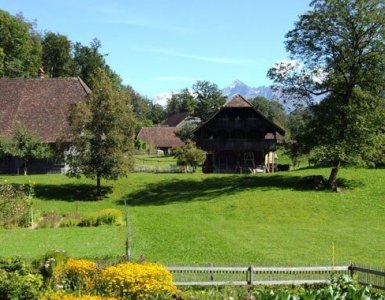 Hands up who thinks of Heidi when thinking of Switzerland! Trouble is, when you move here and become an expat in Geneva, Zurich or any other modern Swiss city, you lose sight of the country’s most evocative and...

Manage Cookie Consent
To provide the best experience, we use technologies like cookies to store and/or access device information. Consenting to these technologies will allow us to process data such as browsing behavior or unique IDs on this site. Not consenting or withdrawing consent may adversely affect certain features and functions.
Manage options Manage services Manage vendors Read more about these purposes
View Preferences
{title} {title} {title}
49 Shares
Share34
Tweet3
Share2
Pin10
WhatsApp