Every country seems to have a stereotype. Be it a state, a province or a region that is the butt of the rest of the country’s jokes. In Switzerland, the canton is Aargau.

The Swiss (and notoriously the residents of Zürich) have created a fiction about Aargau that their two-letter license plate code "AG" stand for "Achtung Gefahr!" (Watch out for danger!). Or that Aargauer people wear white socks and that they are carrot eaters.

Located between Zürich, Basel and Bern, the canton of Aargau is in the heart of Switzerland's so-called flatlands. And despite many travelers having never heard of it, the canton is also one of the most densely populated.

On a recent trip to Aarau, the capital of Aargau, I looked for white socks without success but did find red shoes. And the carrot thing is more a point of pride than an insult.

Every first Wednesday of November, the folks of Aarau celebrate the wonderful root vegetable loved by rabbits, horses and humans alike - the carrot. There is some evidence that the Aargauers were the first to cultivate carrots and other root vegetables in large numbers. Today, however, they do not produce more than other cantons. Nonetheless, the Aargauers have adopted the carrot as their vegetable, like the Berner have their onions, the Thurgauer their apples and the Walliser their apricots.

The traditional Rüeblimärt (Carrot Market) attracts some 35’000 visitors midweek to a town with a population of just 21’000. That alone is a feat and worth the journey to buy and try purple, yellow, red and the classic orange carrot. Eat them raw, drink them juiced, have them as soup and cake, or even steamed in a bun like a hot dog! 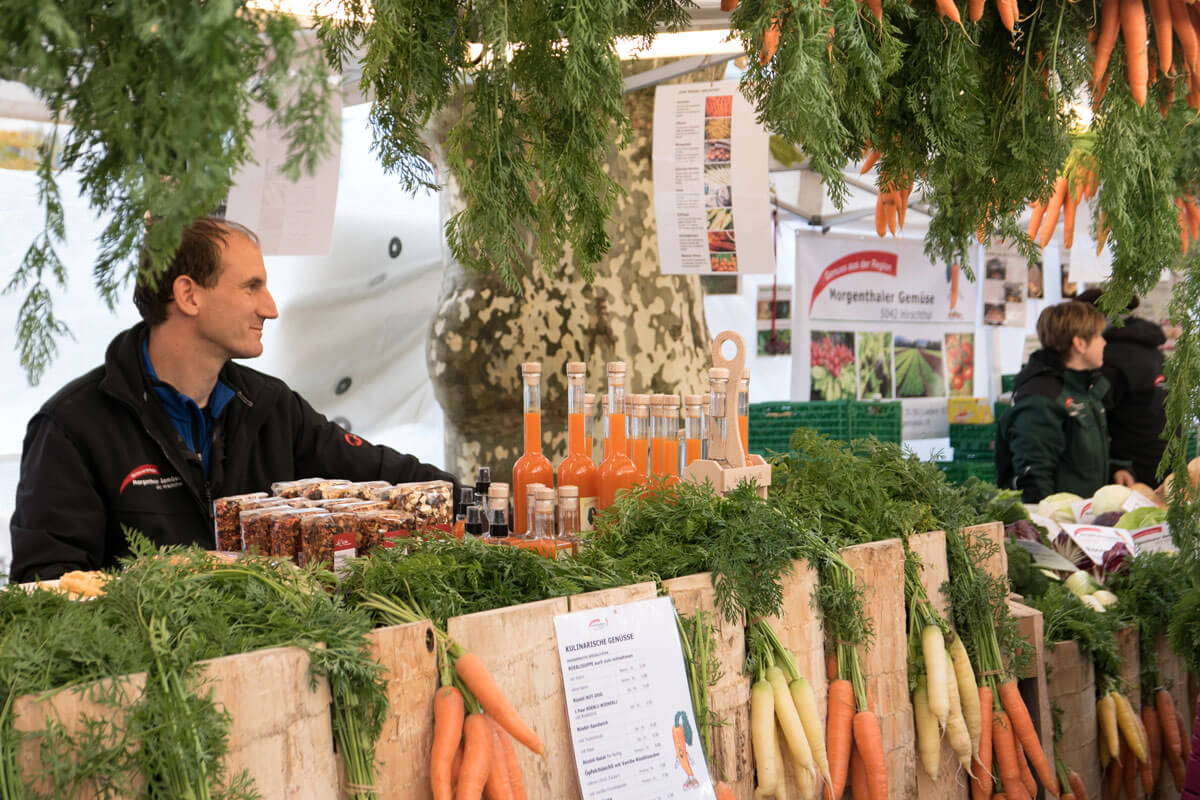 An experiment in being different

For those of you not able to plan a trip to Switzerland for the start of November or a day off midweek, Aarau is worth a visit more than once a year. The small town is a pleasant surprise - the type you find in places that are often forgotten. 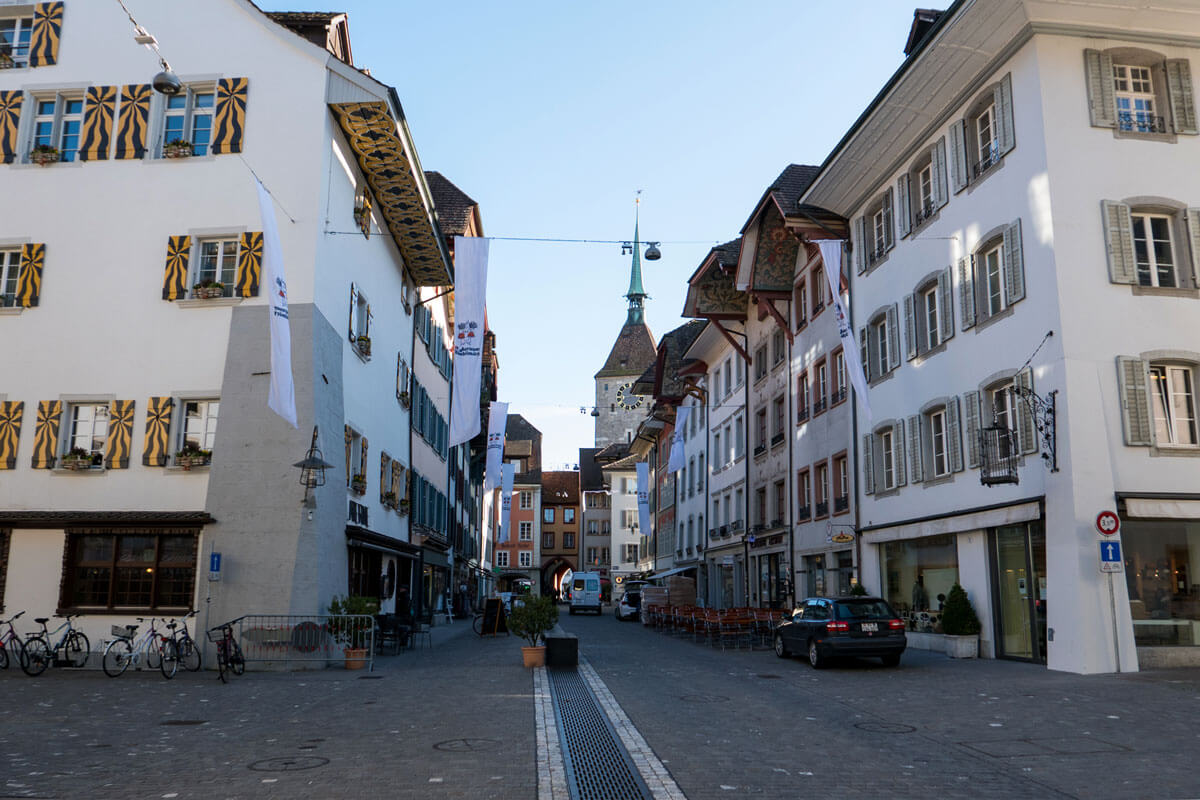 Though the city has been the site of civilization since the Bronze Age, the town known today as Aarau was founded by the Kyburger count Hartmann IV around 1240. There is a statue of him inside the main city gate. 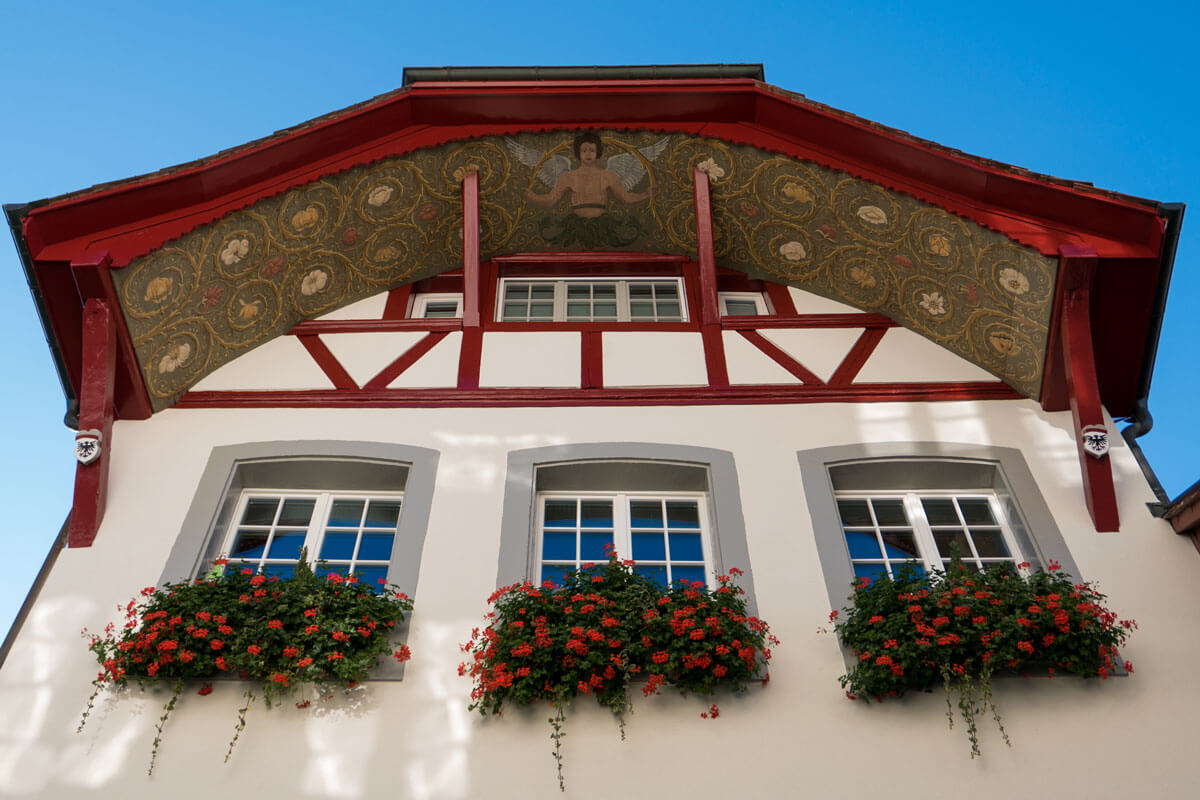 Stepping through the opening in Switzerland's tallest medieval structure, you are greeted by a well preserved old city. What makes the city stand apart from many others is that the old town is void of chain restaurants and stores.

Instead, you see local businesses run with enthusiasm and passion by the city’s residents, many of them quite young. In fact, Aarau’s dedication to improving the liveability while preserving its architectural legacy won it the Swiss Heritage Society Wakkerpreis in 2014. 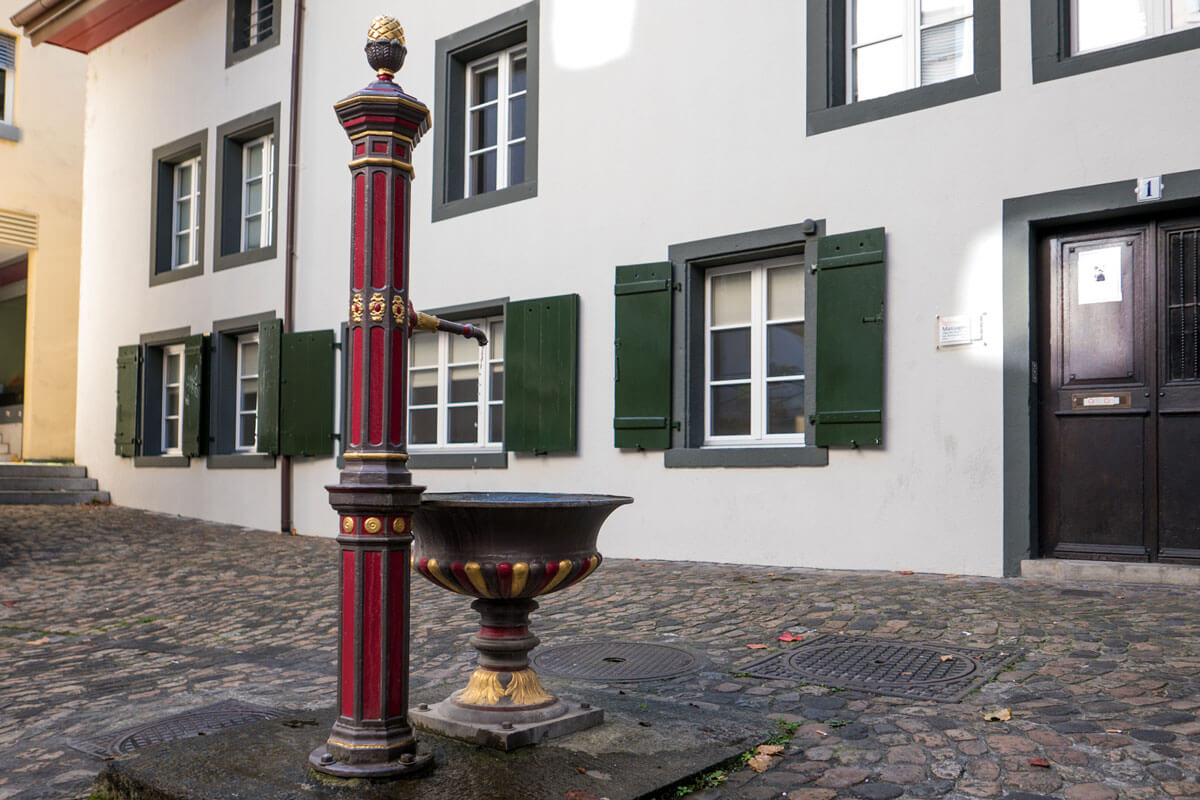 Aarau is picture perfect in every way

Just a half-hour train ride from Zürich, Aarau makes for an excellent day trip, and not just on a beautiful autumn day. On the first Friday of July, the women of Aarau will decorate about 24 of the city’s 90 some fountains.

The traditional Maienzug, a youth festival marking the end of the school year, is a photographer's dream and a family-friendly affair. This year, the city will host its own Christmas market, for which the mostly pedestrian old town makes the perfect backdrop. If the Christmas market is anything like the Rüeblimärt and the businesses behind these ancient walls, it will surely be unique and authentic.

For art lovers, the Aargauer Kunsthaus is a treasure that is not to be missed. Spread over three floors, the museum features the most extensive and splendidly curated selection of Swiss art. The original building dates back to 1959 and shows a resemblance to the 1958 extension of the Kunsthaus Zürich.

However, visitors coming from the train station will be confronted with the 2003 expansion to the Aargauer Kunsthaus, which was designed by Swiss star architects Herzog & de Meuron. Together, much like in other parts of Aarau, there is a pleasing juxtaposition of styles with glass meeting concrete.

Here are some impressions from my recent visit of the Aargauer Kunsthaus: Experiments in congruency at Stadtmuseum Aarau

Old meets new is also what you will find at the Stadtmuseum Aarau where a new wing was attached to the castle. The facade of the new building is covered with life-sized xylographs representing the citizens of Aarau. These were carved into a sequoia that stood beside the castle and needed to be cut down to make room for the addition. The complete structure works pleasingly to the eye and helps frame the square which it borders.

At the main station, the bus stop has a light and airy glass roof. It is reminiscent of a cloud or of fog that looks modern and space-aged. It really stands out, both along the classical 19th century architecture across the road as well as the Bauhaus-esque steel and glass train station, which was completed in 2010. See it to believe it!

Whether it is a short day trip to the medieval Kyburg and later Habsburg city, or a romantic weekend getaway to Aarau for the Christmas market, the city is worth a trip.

Those wishing to stay the night will find the accommodations at the Hotel Kettenbrücke to be exquisite. For more of a B&B feeling, try the zumgraf B&B. Now that I have discovered it, Aarau will be a place that I will take my girlfriend for dinner while the Aagauers flock to Zürich’s dance clubs.

That’s the other stereotype people in Zürich like to spread about the people from Aargau: They’re always hanging out in Zürich! 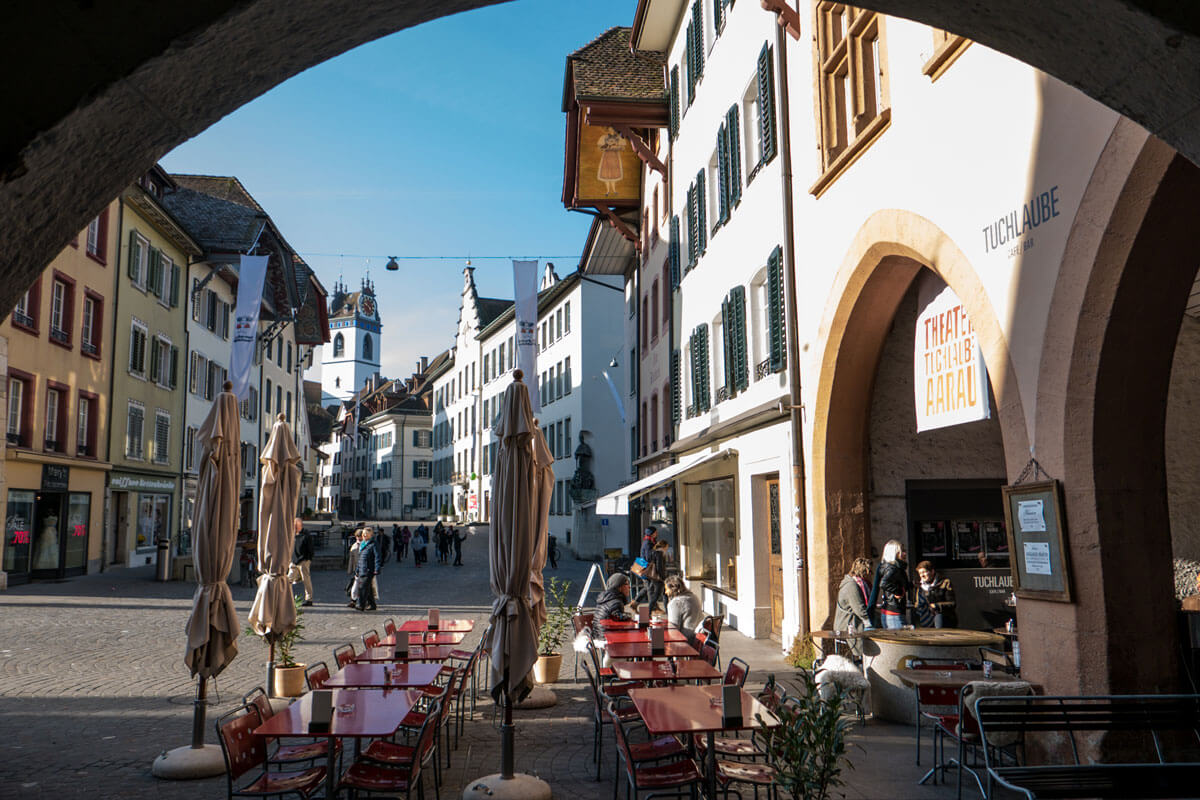 We tried paragliding with FlyTicino (and we’ll do it again!)

Six months ago, I would have never dreamed of lifting off a mountainside like bird. But today, I will be doing just that! You see, I have this habit of... 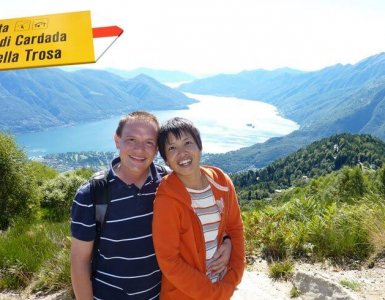 Our hiking tips for Cimetta above Locarno in Ticino

In just under 3 hours from Zürich HB by train, passing by the UNESCO world heritage site of Bellinzona, we reached Cardada Cimetta in Ticino...

Manage Cookie Consent
To provide the best experience, we use technologies like cookies to store and/or access device information. Consenting to these technologies will allow us to process data such as browsing behavior or unique IDs on this site. Not consenting or withdrawing consent may adversely affect certain features and functions.
Manage options Manage services Manage vendors Read more about these purposes
View Preferences
{title} {title} {title}
265 Shares
Share214
Tweet
Share
Pin51
WhatsApp