7 reasons for the Zurich Film Festival 2016

September is a great month to be in Zürich. Even with summer coming to an end, the sun is still generously warm. And the promenade along the lake is busy with couples and families – and the occasional Hollywood director.

September is the season of the Zurich Film Festival.

Already in the 12th edition, the ZFF keeps growing in size, recognition and swag. Just a few years ago, we had a brief encounter with Oliver Stone in the lobby of the Baur au Lac. We were there when Hugh Jackman famously crossed the tram tracks in front of the Corso theater to take selfies with fans. And last year, we met the lovely Ellen Page who spoke about her latest film, Freeheld.

Who knows what surprises await us this year? Based on the press releases so far, this year’s ZFF is going to be as star studded as ever...

So, here are seven reasons why you should come to Zürich this month:

On opening night on September 22, Oliver Stone is screening his much awaited film about the story of Edward Snowden. (It's aptly entitled SNOWDEN.)

Scottish actor Ewan McGregor will be in town to promote „American Pastoral“, his directorial debut. He also acted in his own film alongside Jennifer Connelly, and the both of them will be walking down the green carpet.

If you have last seen Daniel Radcliffe in the role of Harry Potter, it is time for a refresher. The young British actor will be enchanting Switzerland as he presents Imperium on September 30, and Swiss Army Man on October 1. The festival has a special line-up for the youngest crowd, too. This year, eight international children’s and family films will be screened. The Swiss candidate is MA VIE DE COURGETTE, an animation by film maker Claude Barras featuring a soundtrack composed by Sophie Hunger.

For the kids’ awards, a jury consisting of 40 kids will be trained in the art of film review. Their teacher is no other than former Bond villain and Swiss actor, Anatole Taubman.

A surprise factor always remains at the ZFF: Will Liam Neeson, Sigourney Weaver or Shia LaBeouf make a surprise appearance on the green carpet?

The Festival Pass buys you access to the record number of 172 films screened during the 11 day event - including 17 world premieres. At 149 francs, that's a steal for any movie buff...

Check out the full program Authenticity. A meeting point. A place where you will be welcomed with a warm "Hoi!" That's Palestine Grill in Zürich, an authentic take-out... 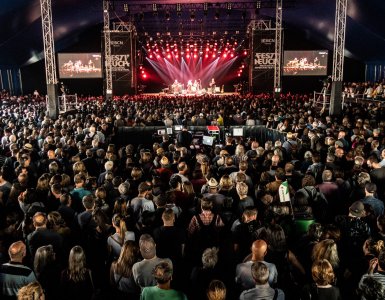 NorthLiving is the Story of a Latvian Woman Entrepreneur in Basel

Manage Cookie Consent
To provide the best experience, we use technologies like cookies to store and/or access device information. Consenting to these technologies will allow us to process data such as browsing behavior or unique IDs on this site. Not consenting or withdrawing consent may adversely affect certain features and functions.
Manage options Manage services Manage vendors Read more about these purposes
View Preferences
{title} {title} {title}
78 Shares
Share78
Tweet
Share
Pin
WhatsApp