At the beginning of autumn, a beautiful living tradition takes place all over Switzerland: Alpabzug, the alpine descent of cows, cattle, goats, and other farm animals.

At the end of September and the beginning of October, many Swiss farmers are busy returning their animals from the mountain pastures. After spending the summer grazing on meadows with fresh herbs, the bovines will be spending their winters in the barn.

Although a sort of mundane agricultural event, the Swiss turn these alpine descents into an opportunity to praise the beloved cows. By decorating and dressing them up with the biggest bells, the farmers showcase their beauty and agricultural achievements.

If you have not yet fallen in love with cows while living in Switzerland, you surely will while experiencing the return of cows. You may have seen pictures of Alpabzug (or désalpe in French), wondering whether to attend...

Five reasons why you need to see an alpine cow parade at least once in your life:

Alpine cow parades are an opportunity to travel around Switzerland 🇨🇭

You are not exactly a spontaneous traveler yet you are looking for a reason to travel more in Switzerland? Joining a Swiss activity such as Alpabzug is a good reason to get out there.

There are dozens of alpine descents happening all around Switzerland. The biggest take place in more well-known towns like Engelberg, Gstaad, or Urnäsch.

But do not forget about smaller villages, either. As long as they are near a mountain (like almost all places in Switzerland, I know), chances are the farmers in these less touristy villages will be bringing down the cows.

For instance, here is the cow parade in the hamlet of l'Etivaz:

This is an alpine descent in the town of Flums:

And here are some typical Simmentaler cows in Charmey:

Since you will be in a mountainous place to watch the désalpe, why not combine the visit with a hike? Even cows are hiking during those days, so you have no excuse not to...

Autumn is considered to be the best hiking season. The temperatures are lower, the sun is still out and the weather is more stable compared to summer.

Autumn in Switzerland – Ultimate guide to the golden season

As you have probably figured out, the Swiss love their cows. They even had a (very emotional) vote recently on whether cows should have the right to keep their horns. Truly, cows occupy an important place in the hearts of the Swiss and in their culture.

Visiting an alpine descent is your chance to appreciate the beauty and grace of those magnificent animals. You might have observed cows enjoying their lives in the Swiss mountains. But to make the cows even prettier, Swiss farmers will decorate them with flowers, greenery, herbs, and flags.

The rhythmic sound of the cowbells accompanying the procession has a calming effect. You cannot help smiling from the aesthetic satisfaction when seeing the animals, and you might even say "wie hübsch!" – "how pretty!"

Switzerland and cows: become part of a Swiss tradition 🥰

Alpabzug is quite a unique and interesting event. Being that it is a Swiss tradition, it will make you feel the atmosphere of a festival where locals gather to spend some time together.

For tourists, the procession of cows might be a nice occasion to take pictures. But for the Swiss, it is about showing their pride in the cows which are an irreplaceable part of Swiss culture and agriculture. After all, who but the Swiss could create such a tradition where decorated cows parade through the streets?

Cow parades are a chance to meet Swiss people 🙌

If you have felt lonely or upset about the notorious difficulty to make friends with the Swiss, here is a chance to melt the ice. Even though the Swiss might be hard to approach and make friends with (despite their general friendliness), this does not apply during an event like Alpabzug.

As it is an important tradition, there will naturally be a high concentration of Swiss coming to the streets to watch the procession. In other words, a great opportunity to start a conversation by saying how "hübsch" the cows are. And, well, if this does not work, you can always shift the conversation to Roger Federer.

Alpabzug is not only the descent of cows and an occasion for people to gather. The finishing touch of a Swiss alpine descent is: food. At some of the larger events, the parade is often combined with a farmer’s market.

These markets, which are usually placed in the destination of a parade, such as a town center, are a foodie's paradise. They present quite an opportunity to sample traditional Swiss specialties. Think raclette, sausages of all kinds, or baked delicacies.

The availability of food stalls, live music, and even livestock beauty contests is why Alpabzug is considered a festival. Check the event calendar of Switzerland Tourism for up-to-date parades, and read about the time we brought home the cows.

What are common words for cow parades in Switzerland?

The procedure of returning animals from higher elevations is known as Alpabzug in Swiss-German and désalpe in French.

What are cow parades in Switzerland for?

It goes without saying that cows are hugely significant in Swiss culture. They not only produce grass-fed milk, but they are also the foundation of many Swiss traditional dishes such as cheese and dried meat.

Did you know that the type of grass and herbs a cow consumes influences the flavor profile of a cheese?

Cow parades and cattle drives are important events in a farmer's life. Cows, cattle, goats, and pigs who grazed on alpine meadows over the summer are returned to valley farms before the first snowfall of the season. The livestock will spend the winter months in a barn, consuming hay and feed.

This annual Swiss custom is celebrated with much fanfare. Farmers will decorate their grass-fed beauty queens for the parade as long as no livestock is lost that summer.

As you will see, livestock parades are a day-long festivity for everyone involved, not just a mere logistical exercise. And since it is a family affair, the parades may include up to three generations!

What is a typical setup for a cow parade in Switzerland?

As in all walks of life, the Swiss love structure even when herding livestock. A parade may be a pretty casual affair depending on the number of bovines as well as the locality. Farmers and their families may be seen wearing jeans and hiking boots while herding their cattle down a paved street.

However, in places like Alpstein in Eastern Switzerland, cow parades have a set structure. In Appenzell or Weissbad, a goat herder boy would lead a herd of white goats. The parade's youngest member is then followed by farmer girls in charge of driving the remaining goats.

It is usual in this region for a dairyman to lead the rest of the parade. Three dairy cows will get the best spots in the parade. They are distinguished by the largest bells and the most intricate embellishments on their necks. Following will be the remaining cows, cattle, and even pigs.

Originally from Russia, Olga moved to Switzerland to continue her studies and be with her Swiss boyfriend. Soon after, she also fell in love with the country, Swiss culture and people.

Olga is interested in event management, marketing and tourism. In her leisure time, she likes traveling in Switzerland and abroad. She can't imagine a summer without hiking in the Swiss mountains or swimming in a lake! 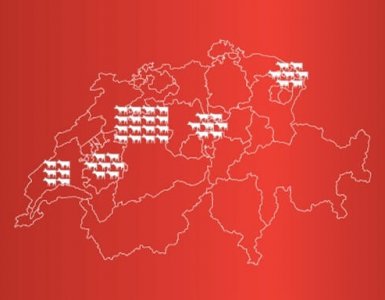 Counting the Cows of Switzerland

Which Swiss canton has the most cows? Or maybe you’ve wondered if any canton has more cows than people? 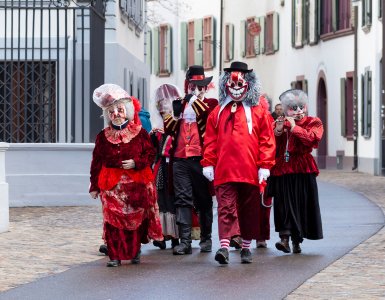 Absurd clowns, wicked witches and Steampunk aliens: you will be able to spot some of the strangest costumes at Swiss carnivals... Manage Cookie Consent
To provide the best experience, we use technologies like cookies to store and/or access device information. Consenting to these technologies will allow us to process data such as browsing behavior or unique IDs on this site. Not consenting or withdrawing consent may adversely affect certain features and functions.
Manage options Manage services Manage vendors Read more about these purposes
View Preferences
{title} {title} {title}
5K Shares
Share5K
Tweet2
Share
Pin73
WhatsApp