The week of Art Basel is over. The restaurants are half empty. The streets are cleared of any art. No more affluent women in high heels or fashionable hats. No more VIP parties and special events until the early morning hours. The exciting week where the city of Basel transforms itself into an international, cosmopolitan city is over.

During Art Basel, a number of great events took place, with the main one being the show at Messe Basel. It included 284 galleries from 33 countries, showing works by 4000 artists in modern and contemporary art.

In addition, there were other venues all over the city: LISTE, PARCOURS, PHOTO BASEL, SCOPE, VOLTA, RHY ART FAIR - there was something for everyone! The SWISS ART AWARDS also took place at the same time with the winner announcement during Art Basel week. Some of the most interesting subjects must have been the very people who showed up in the first place.

It seemed as if some of them dressed up just so their photo would be taken next to a piece of art. It was amusing to watch. At some point, I started thinking it is the people who make this week more artistic, rather than the art itself... 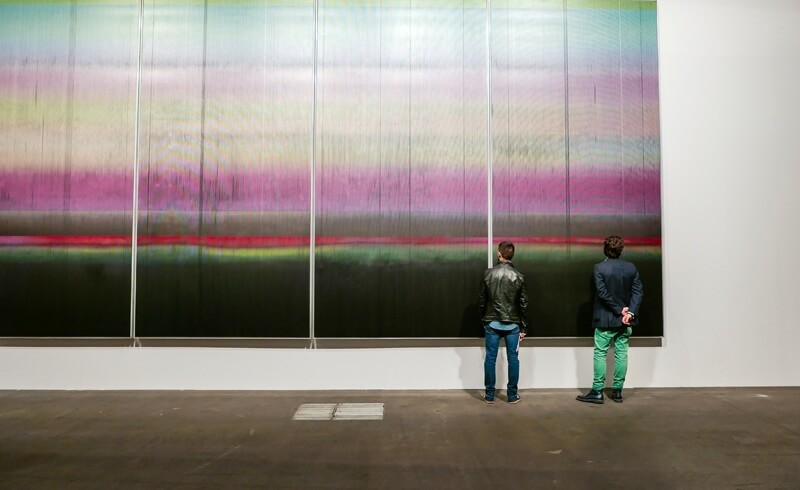 In my opinion, the best part of this week were the events outside of the large venue. Let me highlight some of them: Each year for the past six years, PARCOURS transforms a variety of unique locations around Basel into art installations. The venue is free and there are various performances during the day. This time, it took place around Münsterplatz next to the iconic cathedral, with 21 different artists represented in various locations.

In the middle of the Münsterplatz, there was a huge stone figure named "The Gracious" by Ugo Rondinone. This basic human figure made of stone stands 100 m tall and could not be avoided! People were sitting between its legs, having a conversation while passersby snapped pictures.

My highlight was the "Forbidden Books Room" by Alicia Framis. This was a shipping crate shelved with 190 books that have been forbidden to read in certain countries or at certain moments in time. People can sit inside and read the books. There were quite a lot of books in there like "Little Red Riding Hood" and "The Diary of Anne Frank", which were surprising to see. Another highlight was "Painting the Roof of Your Mouth" by Davide Balula. There, you would receive ice cream in different colors (black, green, brown and grey), all representing a painting. The colors were derived from natural elements which the artist employed as pigments in the paintings, including burnt wood, dirt, algae and river sediments. I thought this was the best part of the walk! Although the ice cream was quite gross (sorry to disappoint the Michelin Award winning Chef Daniel Burns), I loved the originality of this piece. The best part was people's faces after trying the different flavors! No one could ignore the marble snowman, officially called the "Traveling Snowman" by Peter Regli. It was placed just on the edge of Mittlere Brücke. I do not think there was a single person who did not take a photo or a selfie with this one... It was great to walk with a map and be surprised by all the pieces of art, some of which were completely bizarre while others made me happy.

From 6 PM to midnight, many performances took place on the Münsterplatz: From a person talking Suisse Romande on the stage to a DJ performance with sound, lights and electronic music, transforming the whole area into a big club! Brand new this year was PHOTO BASEL. Set in Ackermannshof, a beautiful location in the old town of Basel along the Rhine, this exhibition was dedicated solely to photography. Ten countries were represented in the galleries of this small venue. It was wonderful that the gallerists were approachable, explaining the photos and the stories behind them. More art pieces were exhibited in SCOPE, an art fair representing new and emerging art. The venue had a great selection of art works, and the atmosphere inside was inspiring. Compared to previous years, I noticed that a lot of art from Seoul. As I wandered along the Rhine with its cafés just across from the exhibition, I realized that SCOPE seemed more artistic on the outside. And there was also this: In contrast to the main Art Basel show, the atmosphere in SCOPE and VOLTA was more relaxing. Less people made it easier to view the art and talk to some of the gallerists. Last but not least, I NEVER READ is an art publishing fair taking place in June during Art Basel. It focuses on printed matter, gathering national and international, institutional and independent publishers. The fair is accompanied by a radio station for audio contributions about traditional art mediums as well as future practices in the arts. There were amazing and original books worth seeing. The exhibit was located in the Kaserne area which hosts a lot of alternative events. Even the Grand Hotel Trois Rois joined in the fun! The pop-up art bar Roth Bar was created specifically for the occasion. Just the day before, Leonardo DiCaprio was having a drink at this bar after visiting the Messe and acquiring some art pieces. A cocktail slinging, interactive art piece installed next to the hotel's normal den allowed for twice the number of spritzes to be mixed up and served...

It was early in the day, so the bar was not open yet. Perfect to take some photos. There was a bizarre assemblage of knickknacks stuffed into its girdle: Television sets, fake candles, broken toys, nonsensical street signs, splintered wood pieces and some disco balls for good measure.

Since the death of Dieter Roth in Basel in 1998, "Roth Bar" has been overseen by the artist’s son, Bjorn Roth, and his grandsons, Oddur and Einer Roth, and has popped up at the HangarBicocca in Milan, the Reykjavik Art Museum and Hauser & Wirth’s Chelsea outpost.

All in all, it was an artful week. Tiring at times, but mostly inspiring. It is great to have this fair come to Basel once a year, as it brings the world a little closer to our small city. While February 14 is mostly associated with love, it can also be a source of anxiety for European men who are traditionally expected to “dazzle and entertain” the woman in their life... How to Capture Swissness – Part 1

Google the term "Swissness" and you will find images ranging from garden gnomes to station clocks. The expression is understood the world over as it describes everything that is uniquely Swiss... We were recently contacted by Carolyn in Vermont who had a curious problem. For her neighbor Bob's 83rd birthday, she would be baking Basler Läckerli...

Manage Cookie Consent
To provide the best experience, we use technologies like cookies to store and/or access device information. Consenting to these technologies will allow us to process data such as browsing behavior or unique IDs on this site. Not consenting or withdrawing consent may adversely affect certain features and functions.
Manage options Manage services Manage vendors Read more about these purposes
View Preferences
{title} {title} {title}
60 Shares
Share43
Tweet10
Share
Pin7
WhatsApp