As a reader of Newly Swissed, you are among the first to find out about a surprising revelation by the Swiss village of Ried! This is no joke but apparently, they had long suspected to be the origin of Obama's distant relatives prior to their moving to the Alsace region in the 18th century!

Based on intensive research by a genealogist, Ried has made a link between President Obama and one of their own villagers. No further details have been made public at this point, but according to this article, the villager's son Christian had emigrated to the US where his last name "Gutknecht" turned into "Goodknight", which became "Goodnight". This is also the name of Obama's maternal family... Either way, Obama has been pronounced an honorary citizen of Ried at this point!

[After finding out about the connection] we went back to work. We aren’t going to stop working because of this. Nothing has changed. (Heinz Etter via swissinfo.ch)

Even though the village of Ried seems to be all cool about it, this news came quite to my surprise and I don't think that it has trickled down to Obama just yet. There will actually be an official press conference on July 13 and you are sure to hear more about Obama's new-found Swissness in the mainstream media of your choice!

What's your take on this? Let's get a discussion going... 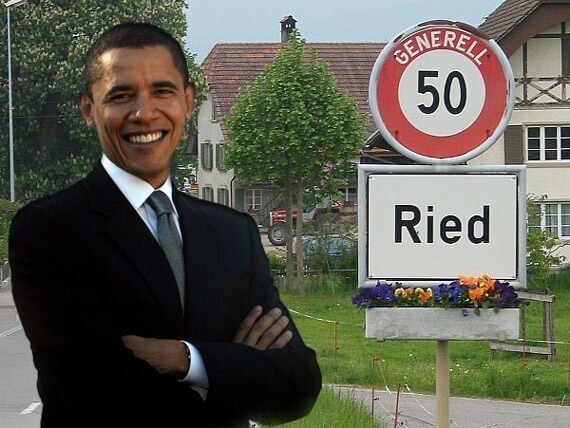 The hike to the Creux du Van is bucket list material. Here's everything you need to know to visit the Grand Canyon of Switzerland...

There is more to Switzerland's movie ties than Ursula Andress and those magnificent, breathtaking locations. Switzerland and Hollywood have...

Manage Cookie Consent
To provide the best experience, we use technologies like cookies to store and/or access device information. Consenting to these technologies will allow us to process data such as browsing behavior or unique IDs on this site. Not consenting or withdrawing consent may adversely affect certain features and functions.
Manage options Manage services Manage vendors Read more about these purposes
View Preferences
{title} {title} {title}
23 Shares
Share21
Tweet
Share
Pin2
WhatsApp