Quai 61 on the quiet banks of Lake Zürich is one of our favorite restaurants.

Whenever we go there for a Sunday brunch or a romantic dinner, it feels like we are entering a 1920’s Charleston style era. For the Russian New Year, the restaurant by the Enge yacht harbor has rolled out the first ever themed experience: Russian Weeks.

It comes to no surprise that Gustav Thöni, the talented young chef at Quai 61, has chosen Russia as the theme. Originally from the mountainous Swiss canton of Grisons, Thöni has fallen for a Russian with a passion for food: His wife is a great cook who still treasures her family recipes.

Chef Thöni believes in traditional recipes with quality ingredients. He tells us that “Russian food is influenced many times over by Muslim dishes from the south, Chinese dishes from the east and the five seas.”

Tonight, we are here to eat our way through the Russian Week menu. We can surely taste the kitchen collaboration of the Thöni family: The courses are traditionally Russian, but the chef has often spiced them up in new ways.

For instance, take the Soljanka sausage and beef stew which Thöni has enhanced with Swiss Landjäger sausage. Even his Russian regulars were sold on this reinvented fusion soup – and the Russian menu in general. Their feedback: It tastes like Russian food from grandmother’s place.

On the other hand, we find out that Mrs. Thöni is the genius behind the pickled herring and red onion. (She has used a family recipe.) Here are some mouthwatering impressions from our dinner at Quai 61:

Khychiny is a typical Russian flatbread which contains some potato. It is most delicious when eaten with sour cream and freshly cut coriander: Soljanka is a sweet and sour beef stew with bell peppers, white cabbage and coriander. In a world’s first, it was enhanced by some Swiss Landjäger sausage: The marinated herring with red onions and potatoes was delicious – thanks to the chef’s wife’s Soviet era family recipe for the pickling: We enjoy the Caucasian style lamb rack with a bottle of 2005 Brunello di Montalcino red wine. The sommelier was right in picking this smokey red, because it goes perfectly with the smoked eggplant, tomatoes and rosemary potatoes. Ukha is a typical Russian fish soup made of dorade, pike, perch and salmon. The Pelmeni are home-made ravioli filled with venison and creamy cabbage. The secret to keeping them moist? Oxtail oil. 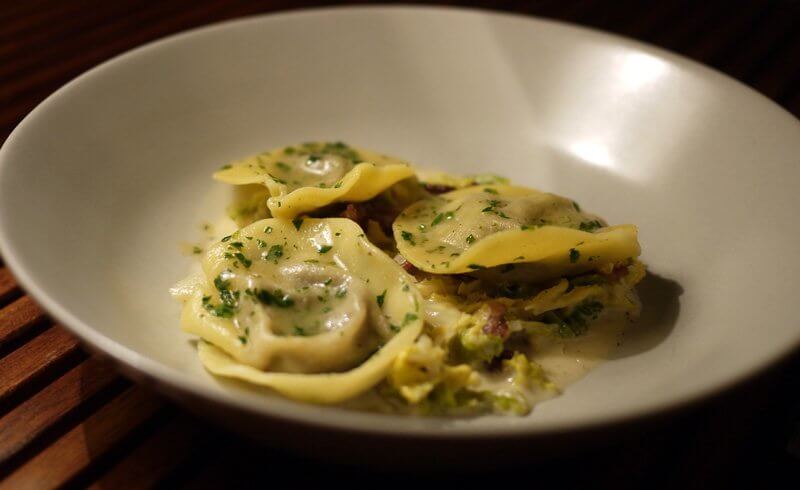 And to finish off our Russian adventure, what’s more fitting than lemon sorbet with vodka? Don’t miss Russian Weeks at Quai 61 this week! Rain or snow, it will be a fun getaway with friends, or a romantic occasion with your date. Have a look at the menu and keep an eye out for upcoming theme weeks at Quai 61 in Zürich…

Manage Cookie Consent
To provide the best experience, we use technologies like cookies to store and/or access device information. Consenting to these technologies will allow us to process data such as browsing behavior or unique IDs on this site. Not consenting or withdrawing consent may adversely affect certain features and functions.
Manage options Manage services Manage vendors Read more about these purposes
View Preferences
{title} {title} {title}
72 Shares
Share72
Tweet
Share
Pin
WhatsApp