My morning started with a nice 17 km run around grey Zurich. In February the general atmosphere in and around Zurich tends to be grey as a blanket of high fog covers any place below 1200 meters. After showering and putting my snow gear on, I was off to Zurich Main Station to take the train to Hasliberg to test ride a new sled.

Now, I'm at an age when most of my friends are test driving cars and some maybe even boats, but that doesn't excite me living here in Switzerland: The public transport network is so efficient that there is no need to own a car, but a premium sled to enjoy the Swiss Alps in the winter is another story.

Meeting my best friend at the station, we jumped on our train towards Lucerne where we'd have to change trains to Hasliberg. She'd never been sledding before, and therefore did not know exactly know what to expect. As the train meandered its way through the rolling hills of Zurich, Zug, Lucerne and then up the Brünig pass, I recounted sledding memories. As a small child in Speicher, Appenzell, my family lived on the side of a hill. My sister and I would go sledding with the traditional Davoser sleds from our farmhouse, down to our neighbors. Or from my grandmother's place higher up the hill down to our place. It was a sledding paradise for children.

The best experience though was bringing the milk to town with my dad on the horn sled. This giant sled is like the SUV of sleds. When we emigrated to Canada, the horn sled was unfortunately left behind, but the Davoser sleds came with us!

We emigrated to Kemptville, Ontario, Canada, an area not known for large hills let alone skiing. But the winters always brought lots of snow with them and there were plenty of areas to go sledding. Limerick Forest had a giant hill where families from all over North Grenville county would go sledding in the winter.

My family was no exception, but when we went, we brought out Davoser sleds. This was at a time when the market was being flooded with GT-Racers. The plastic and metal construct promised superb handling and maximum enjoyment.

The problem with GT-Racers and the like is their plastic pieces: Plastic and cold Canadian winters don't really mix. The plastic cracks and breaks. And the fact that most people need to assemble the GT-Racer at home means that after a season parts are loose or missing and it doesn't work like it should anymore. The Davoser is a solid sled that is virtually unbreakable like a crazy-carpet, but has the handling of a GT-Racer for those who know how to ride it.

Since moving back to Switzerland, I've been sledding in Schwende, Appenzell and Bergün, Graubünden. For a time this winter thanks to the God of Ice and Snow, people were even able to sled on the Üetliberg in Zurich! 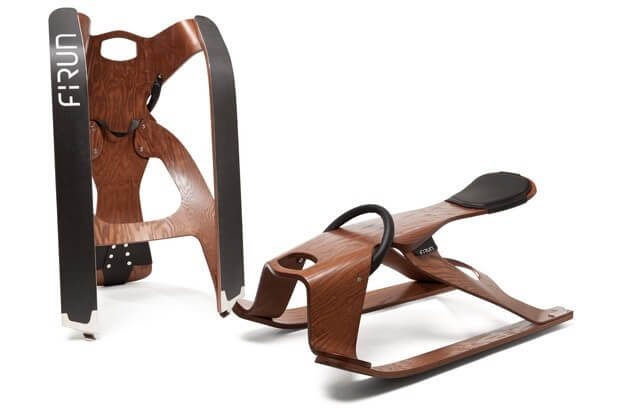 When I came across a new sled in the monthly SBB magazine VIA, I knew I needed to see this sled in person. The sled’s design catches the eye and anyone who appreciates good design, is sure to be attracted to this sled. That night I contacted the company’s marketing director, Alain Keller. Lady Luck was evidently smiling upon me as Alain told me that I could come out for a test day in Hasliberg. I quickly registered myself for the test ride event and started counting the days. Arriving up at Bidmi in Hasliberg, my friend AnneMarie and I met up with the FIRUN team. Three of the four members were on site, as the fourth member was at home sick in bed. Then the other piece of unfortunate news: The warm temperatures meant that some of the slopes had to be closed due to the threat of an avalanche.

This also meant that the planned sledding run was also closed. Quick on their feet, like entrepreneurs need to be, the three quickly regrouped and had us move over to another sledding run. En route I was able to ask co-founder Marc Montandon, where the name came from. FIRUN, he told me, is the name of the God of Ice and Snow in a popular role-playing game known as the “The Dark Eye”.

The other co-founder and designer, Christian Oberlin, told me about how the sled started as Sebastian Götte’s Design Bachelor’s thesis. The unique and ambitious project of developing a new wooden sled was not without risk. However, thanks to the support of the company Götte & Partner Industrialdesign, the young men were able to make a go of it. FIRUN was even nominated for a Swiss Design Award in 2011.

As we made it to the top of the new run location, a group of ten of us were eager to get going. Sitting on the premium sled, Marc gave us a quick lesson on how to handle the sleek looking sleds. Just looking at the 8.7 kg sled constructed of bent plywood, you know that this is not your typical Davoser! The blades are much wider — 10 cm wide to be exact. They’re produced in conjunction with the famous Swiss snowboard firm Kessler. Unlike the thin Davoser blades, these sit much nicer on the surface of the snow and mean riding on varying snow conditions is easier. Of course, this also means that the sled reacts much quicker than the Davoser.

The guys like to make the comparison that riding a FIRUN is like driving a Ferrari. They’re right.

The flexible tail-like seat absorbs the shocks from the bumps you hit on your way down the hill. Like the interior of a Ferrari, the seat is made of hand stitched leather. The rider is seated somewhat higher than on traditional sleds, but that keeps the snow of of his face.

Then, of course, there are small details like a bungee cord with buckle to pull the sled and attach to your leg or wrist, so that should you take a spill the sled does not fly off the side of the mountain. The unique design of the sled allows one to carry the sled in numerous positions, which depending on where you’re going or how big you are, will allow you to find a comfortable way to carry it. The sled is one sold unit without moveable parts, in many ways it is very simple, yet every cutout section has a purpose. Detail is exhibited in the chrome steel breaking claws at the end of the skids, the inlayed name on the underside of the right skid and the leather name tag. 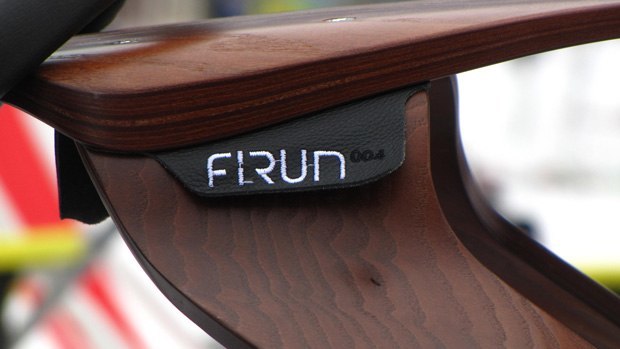 As we took off on our first run, we were all a little nervous. The sleds accelerated quickly even in the heavy wet and sticky snow. For the first part, most of us rode with our feet on the ground, as not to go too fast.

The run had several places where we needed to dismount and pull or carry our sleds to a part where we could go further downhill. This allowed me to catch up with designer, Christian Oberlin, to ask him about the development. I asked him how many sled models had to be constructed before the current working model came into existence. The answer was three, but this was only due to the amount of design one can do on the computer using CAD. For each of the trial models, special tools and forms had to be constructed, which meant that they wanted to be very sure that the model would work. Christian also told me that he and Sebastian (with input from the other members and of course their riders) would continue to improve the sled’s design and handling.

Reaching the gondola at the end of our first ride down, we quickly went back up the mountain. Up top, Marc taught AnneMarie and myself how - just using the tips of our feet - we could travel faster and smoother. And we were off again.

This time with more speed and more precision in turning, but still needing more practice. The learning curve though is fast, which makes this sled very appealing to new riders. Both AnneMarie and I were pleasantly surprised how much faster and easier we were able to ride down the hill. Having one of these at home to go out into the mountains with in the winter would be great.

During the course of the day, I was able to ask the guys about what it is like to design and sell a premium product. This was no accident to them, but rather a conscious decision.

FIRUN is not just a sled, it is a piece of design. It is the equivalent to owning an Eames Lounge Chair. Furthermore, the production is all done in Switzerland using FSC certified Swiss wood. Simply put, it is beautiful.

When I asked about a customer profile, they had to think for a minute. I could tell they were thinking about giving me the stereotypical profile a journalist wants to hear and easily report, but they could not give me that. After a minute of thought, they told me that their customers are all different.

Some are big earners working in fields like finance, and others are trades people who need to save to buy themselves this kind of sled. What all of the customers have in common is an appreciation for design and enjoy sledding. If some want to show it off, that’s alright too.

Of course, a premium product also comes with premium service. That means if the blades break or get worn out from riding over too many stones, they will get replaced. If a sled breaks during normal usage a replacement sled will be on the way within 24 hours. What determines great design is often revealed over time. Like a Ferrari 250 GTO (1962) or an Eames Lounge Chair with Ottoman (1956) time will tell how great a design the FIRUN sled is. However, when we look at the criteria for great design, namely:

I truly believe that we will see FIRUN in the VITRA museum one day. As for me, I’m not saving for a Ferrari right now, but I am saving up for a FIRUN for next winter. The pamphlet headline is definitely correct, FIRUN is a remarkable departure into a new dimension of sledding. The Power of Music – Don’t Eat the Yellow Snow

We all know them. We have memories about them. But have we ever really taken them to heart? The best popular songs of all time undoubtedly have some strong calls to action: “Fight for your right”... 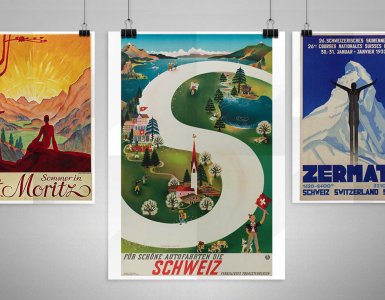 A Tour of Switzerland in Vintage Tourism Posters

From snow-drenched slopes to glistening lakes and bustling cities, Switzerland is packed with opportunities for tourists. These vintage posters...

I have recently come across these beautiful photographs of Russian artist Tata Vislevskaya. Using a methodology called cross processing, she has captured the Swiss Alps from a very unique perspective. "Pain, loneliness...

Manage Cookie Consent
To provide the best experience, we use technologies like cookies to store and/or access device information. Consenting to these technologies will allow us to process data such as browsing behavior or unique IDs on this site. Not consenting or withdrawing consent may adversely affect certain features and functions.
Manage options Manage services Manage vendors Read more about these purposes
View Preferences
{title} {title} {title}
446 Shares
Share
Tweet
Share
Pin446
WhatsApp