The Swiss cultural council has an annual budget of 50.8 million francs for the promotion of Swiss films. While most of the funds are invested in worthwhile endeavours, some moneys are spent on more than questionable productions. And let's be honest: It is no secret that really good Swiss movies are a dime a dozen...

Now, a website aptly called Schweizer Film Plot Generator is trying to change the dismal state of the Swiss film industry once and for all. Thanks to a comprehensive database including such important main actors like "mail man", "retiree", "substitute teacher" or "secondo family" as well as terms like "three legged" or "sexy", the plot combinations are endless.

The following are some of my favorite plots. Let's hope that a producer jumps on them and asks the Swiss arts council for some federal funds...

CHAOS: A sympathetic petty criminal and an aging mountaineer organize a soap box derby. They learn an important lesson along the way. 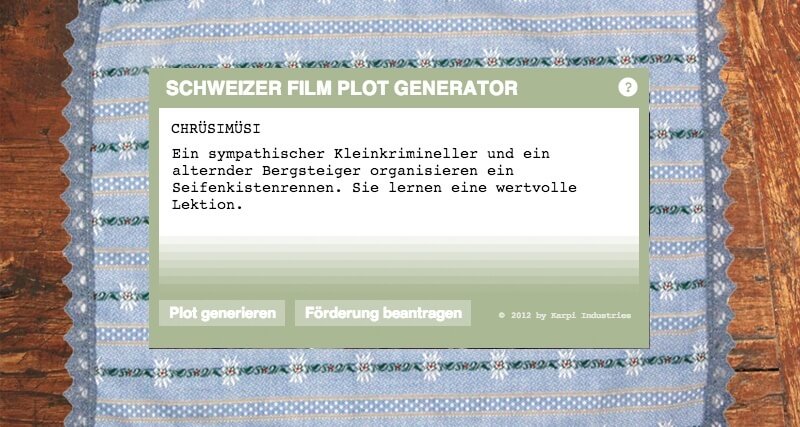 RACLETTE FOR TWO: A former Swissair pilot and a sexy veterinarian help to mediate a domestic dispute among neighbors. A film about friendship. 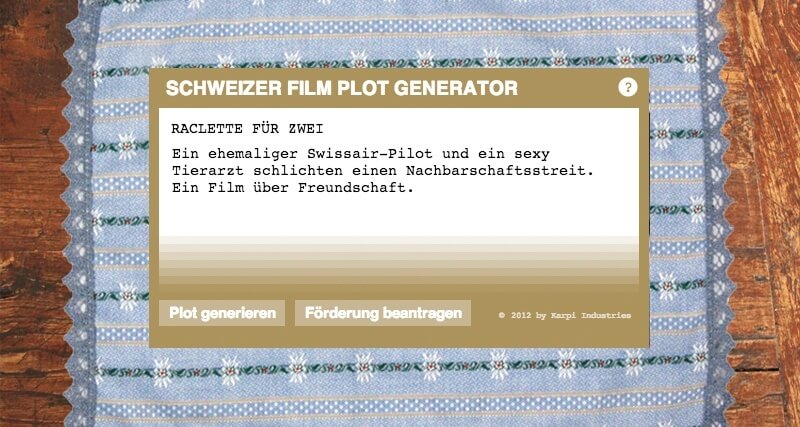 TO NO AVAIL: An idealistic social worker and a three legged St. Bernard are on a quest to save the last remaining photo booth in Switzerland. Thanks to YouTube, the entire world finds out. ON THAT HILL: A politician with a early onset Alzheimers and the entire women's choir save the local radio station. A modern fairy tale with pizzazz. 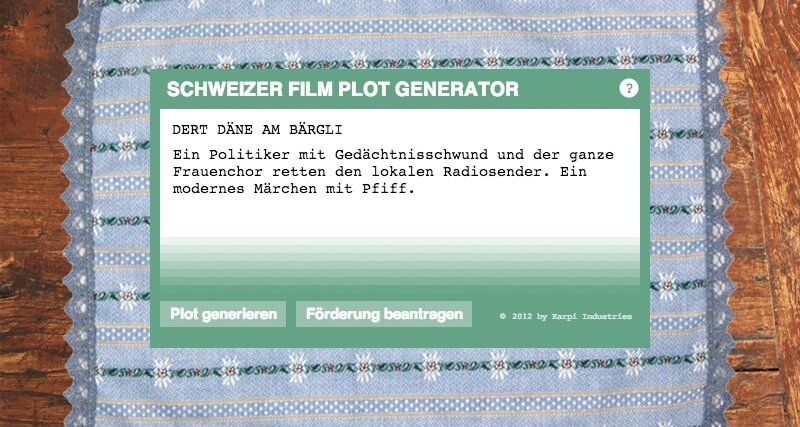 NOVEMBER: The young mayor and the town's lonely priest save the village oak tree. And finally, the cows are producing milk again. 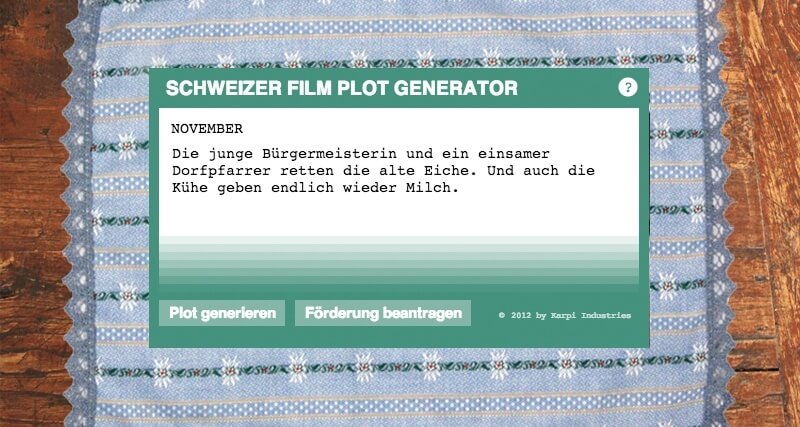 THE FARMER MAKERS: A cleaning lady of African descent and a child prodigy organize a Rock 'n' Roll festival. A story about life. 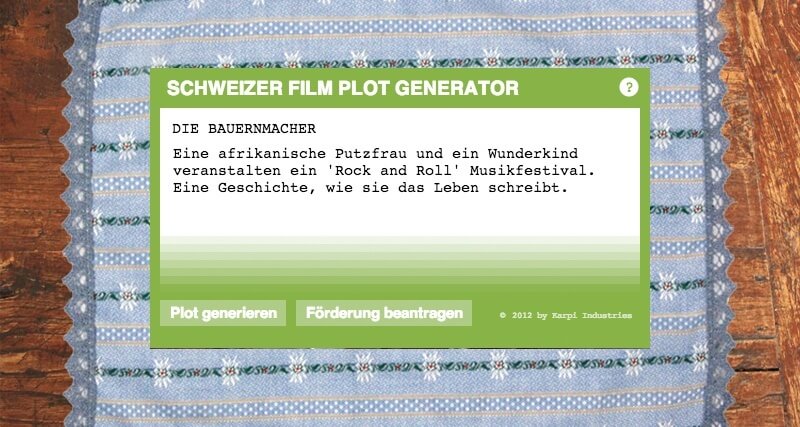 FIRE IN THE DEN: A recently transferred cop and a child prodigy prevent their town from storing Atomic waste. In 3D. NOW OR NEVER: In order to save the farm, a single mom and an aging mountaineer decide to go into llama farming in the Emmental valley. A musical. 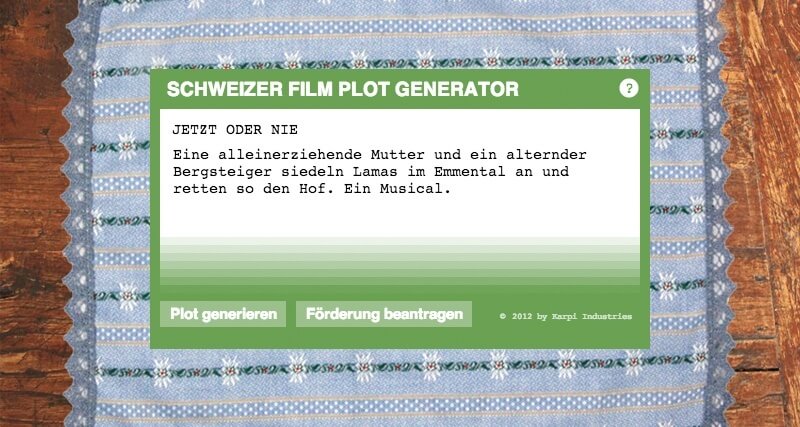 THE HOME AND THE FARM: A good hearted yet unsuccessful attorney and a sad millionaire convince the townspeople of a compromise. The pothead son helps, too. 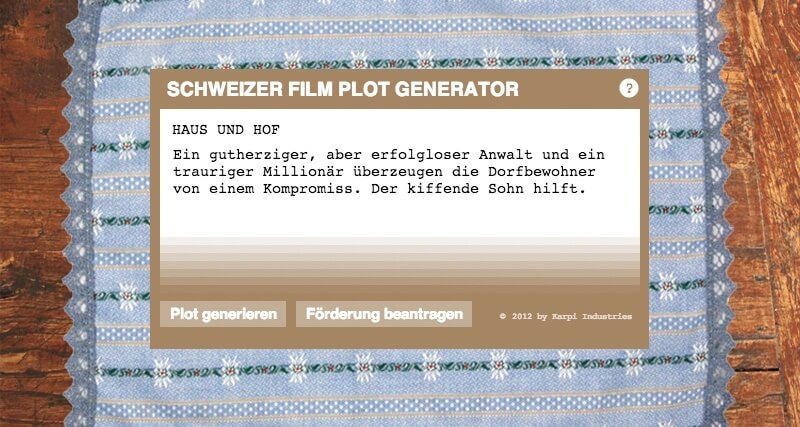 EMMENTAL, OUT OF ALL PLACES: A retired athlete who wants to give it a go one last time, along with an aging mountaineer, defend the town from a bear attack. Based on true events. 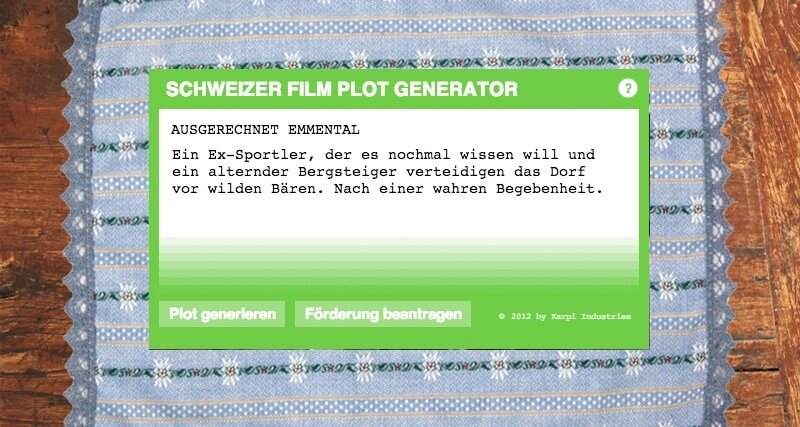 FIRST ASCENT: A stressed out city girl and a retired Swiss wrestler are on a quest to save the country's last photo booth. A film about friendship. DARN IT: A rapper granny and a stubborn old farmer save the town's sundry shop from going out of business. A heartwarming story about the ups and downs of everyday life. 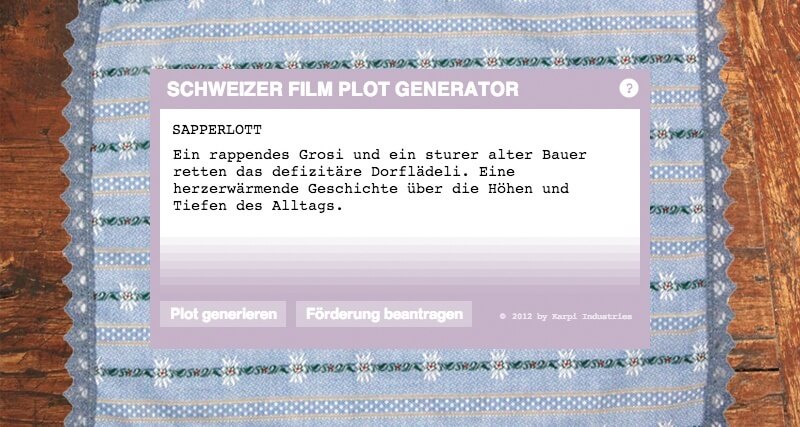 PERFECTLY HAPPY: A recently divorced medical doctor and a sympathetic hoarder prevent the erection of a cell phone tower. A fast paced comedy for all ages. 15 Worries that Keep the Swiss Awake at Night

Beyond the unshakeable appearance of the stoic Swiss is a big brewing cauldron of emotions. The Swiss do worry like the rest of us, though... 7 things I learned from reading “The Naked Swiss”

For the past years, I've heard a lot of clichés about the Swiss: they are boring, rich and xenophobic. It's a good thing I got my hands on The Naked Swiss...

Manage Cookie Consent
To provide the best experience, we use technologies like cookies to store and/or access device information. Consenting to these technologies will allow us to process data such as browsing behavior or unique IDs on this site. Not consenting or withdrawing consent may adversely affect certain features and functions.
Manage options Manage services Manage vendors Read more about these purposes
View Preferences
{title} {title} {title}
67 Shares
Share58
Tweet9
Share
Pin
WhatsApp