Swiss citizens have the privilege of direct participation in decision making: Direct democracy. This weekend, three federal initiatives as well as numerous cantonal constitutions are on the ballot. The very privilege of influencing the outcome comes with a certain responsibility to making an informed decision.

As for me, I always love it when my "homework" arrives in the mail several weeks prior to a vote: For those electing to cast an absentee vote by mail, that same envelope has to be used to return the ballots. But wait, don't tear it open just yet! There is a particular way of opening the envelope which is described in detail on its back. The "tear, repack, reseal" mechanism is pretty slick.

Let me paraphrase: "Please don't open here!" is written along the top where one would normally tear open an envelope. "To open this envelope, place your thumb here and tear along the perforation." "To return this envelope by mail, moisten along the top and stick it close." Pretty clever, right? What's inside the voter's envelope

Below, I have laid out the contents of a typical envelope.

To inform the voter population, the Swiss government goes to great lengths to produce unbiased publications summarizing each initiative. The beige envelope at the top is used to seal all the marked ballots. Note the red Abstimmungsbüchlein for federal constitutions: Apparently, the efforts to print 5.4 million such voter booklets come with a price tag of 507'000 francs, or about 10 cents per booklet.

This expenditure has recently sparked a minor debate. Opponents of the booklet claim that in this century, plenty of media sources allow for citizens to get informed. Their argument is that a separate booklet taking up to six months in preparation was unnecessary. 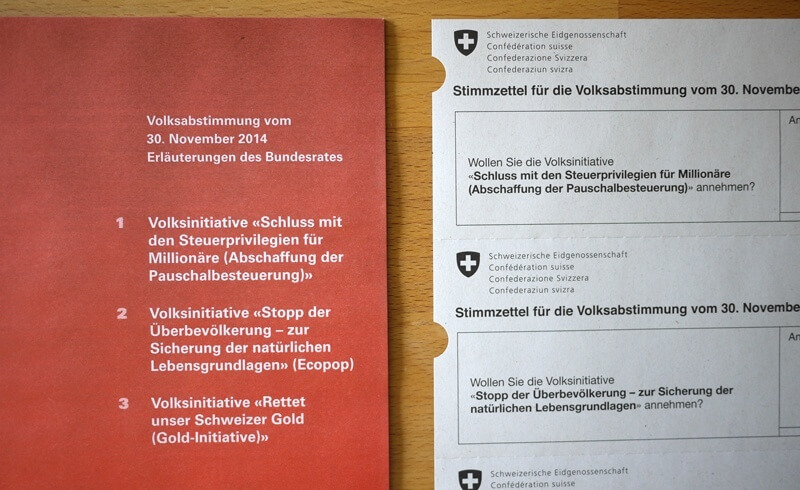 Similarly, the blue brochure summarizes all constitutions for the particular canton of residency -in this case for Zürich. The various ballots are marked with the number for the particular issue, such as "1" regarding an extension of a tram line across Zürich Hardbrücke. The blue color signifies that the ballot pertains to a cantonal issue (beige is for federal issues). As you can see, exercising the right to vote in a direct democracy like Switzerland requires some preparation and the willingness to get informed.

But whether the ballot is cast by mail or on voting day at the local city hall, the Swiss always have the last word: "Ja oder Nein". 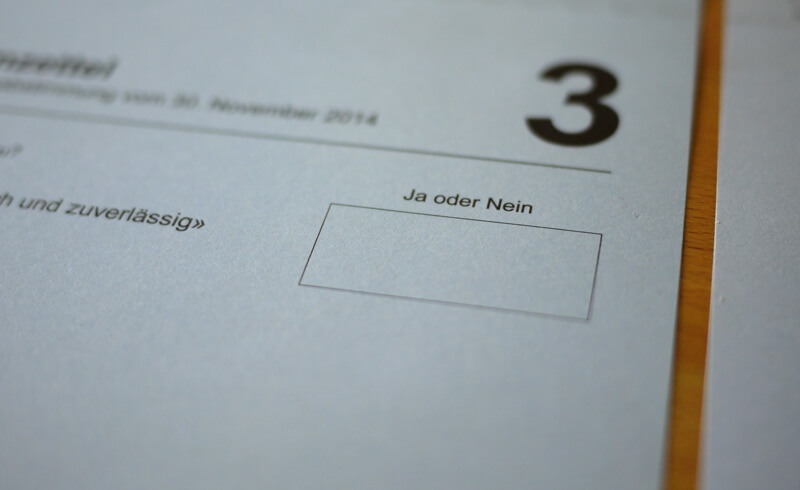 Switzerland and the United States have a track record of adopting each other's policies. Consider 1787, when the founders of... Interestingly, the APPP states that "the use of presentation software costs the Swiss economy 2.1 billion Swiss francs (US$ 2.5 billion) annually." Their noble mission is not to abolish PowerPoint presentations from the...

Manage Cookie Consent
To provide the best experience, we use technologies like cookies to store and/or access device information. Consenting to these technologies will allow us to process data such as browsing behavior or unique IDs on this site. Not consenting or withdrawing consent may adversely affect certain features and functions.
Manage options Manage services Manage vendors Read more about these purposes
View Preferences
{title} {title} {title}
747 Shares
Share708
Tweet
Share6
Pin33
WhatsApp