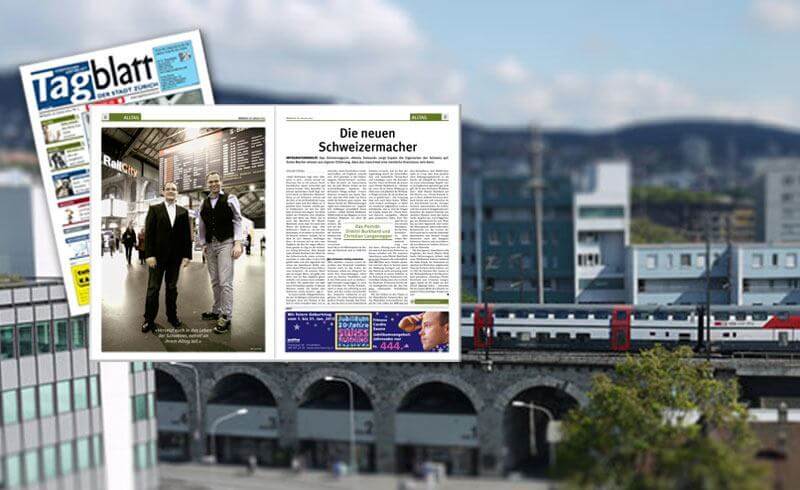 Translation of an article about Newly Swissed by Jan Strobel, published in Tagblatt on January 16, 2013.

"Each Swiss person carries around his or her own glacier", a Frenchman once said, poking fun at his neighbours. Nonetheless, there might be a grain of truth in his words. A glacier depends on time and stands as a symbol for slowness. It adjusts to the environment and at the same time changes its surroundings by clearing the way of giant boulders, then leaving them behind. Most of all, a glacier radiates a sense of coldness and hardness.

Hardness is the key phrase for Dimitri Burkhard when asked about the Swiss psyche. “The Swiss tend to be like coconuts – they’re hard to crack. Several rounds are usually required to be let in.” He remembers one of his first train rides after having lived in the US for a decade. It was an eye-opening experience because it is on the very trains where the Swiss are most – well – Swiss. At the time, Dimitri had already replaced some of his Swiss coconut shell with the more tender skin of an American peach.

“There was this guy in my compartment sporting a college football shirt, and so I let him know how much I liked it. All I got in return was a blank stare, which made me realize that I had just invaded his privacy. It was at this moment when I became Swiss again. Newly Swissed, that is.”

It was everyday situations like these, as well as numerous observations and noteworthy stories which inspired the 32-year-old to start documenting his home country – in English, of course. So in 2010, he launched the online magazine “Newly Swissed”. He continued to expand his editorial team throughout the years, allowing for regular articles on life in Switzerland.

“Our reporters are from Japan, Spain, and the US, and each one experiences Switzerland in their own personal way. This collection of individual perceptions is really painting an incredibly diverse picture of this country,” Dimitri explains. Meanwhile, Newly Swissed has evolved into a favorite online platform of expats interested in learning about Switzerland. Newly Swissed currently attracts about 40’000 visitors per month, with 2400 Facebook fans and counting.

Truly Getting to Know the Swiss

“The message we are trying to share with our readers is to put themselves into the shoes of the Swiss. Participate in daily life, attend the same events and check out the Zürich night life – instead of sticking to the same pubs all the time,” says 31-year-old Christian Langenegger, one of the writers at Newly Swissed. He, too, knows a little something about the difficulties of settling in Switzerland after having grown up in Ontario, Canada. For many years, one of the only reminders of his Swiss origin was a truck that would pass through town to sell things like Thomy mustard and smoked Landjaeger sausages.

Nothing says home like food, Dimitri agrees. “Heimat means to be sitting in your living room in Ohio and suddenly start to miss Willisauer cookies, a childhood favorite.”

One's origin is an emotionally charged center of gravity, so it is impossible to ignore. This might explain the practical nature of a lot of readers' questions on Newly Swissed. For instance, expats will frequently reach out to gain an understanding of the Swiss system of shared laundry rooms.

Swiss etiquette appears to be another hot topic. Dimitri explains that particularly for Americans visiting a Swiss home, the idea of leaving the shoes at the door and walk around in socks may be alienating at first. Hardwood floors are to be protected, after all. "But those who ignore this societal rule will often leave a bitter aftertaste. Sometimes, relationships are being tested in ever so small ways."

To check the laundry schedule in the communal basement while wearing house shoes, to use the SBB train schedule app on the smartphone, to collect loyalty stickers at Coop or to display the recycling schedule on the kitchen wall: These are examples of what Swissness is all about. "The term does not actually exist in the English language, however, as Swissness was coined by no others but the Swiss", Dimitri elaborates.

When it comes to creating content for Newly Swissed, the writers try to interpret Swissness loosely while steering clear of the prevailing "cutesy Switzerland" stereotype. Instead, they cover the latest trends in design, attend the hippest festivals, visit the newest museums, explore culinary worlds from the trucks selling roasted chicken to the distilleries in Appenzell, or introduce Swiss traditions from times past. Newly Swissed has a fair share of entertainment as well, such as the funniest Google Street View scenes found in Switzerland or the portrayal of Horizonville, an American enclave in the Rhone Valley.

For any Japanese, American or Brit sifting through Dimitri's online magazine, the proverbial coconut is being cracked little by little. So Dimitri Burkhard, Christian Langenegger and the rest of the Newly Swissed team have their work cut out to keep shedding light on the very Switzerland which, at the 1992 World Exhibition, artist Ben Vautier proclaimed "does not exist". Do you remember the first time you tried skiing? Seven refugee students and alumni from around the world tried it last December in Engelberg.

So here we are in 2012, and you did it: You’ve made a New Year’s resolution to be more active and start running. Like so many things in Switzerland, it was not the Swiss who invented running, but they do it very well... 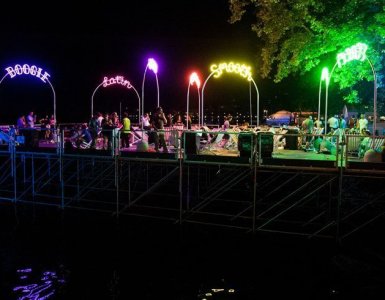 How I Fell in Love with the Montreux Jazz Festival…

The Montreux Jazz Festival has been on my musical bucket list for years. For me, it has always been this magical event...

How to Escape the Cold at Milandia Spa in Greifensee