Why Zoo Zürich and the Lewa Wildlife Conservancy are friends The Lewa Savanne at Zoo Zürich has a real life match in East Africa. The latest zoo extension was inspired by the untouched wilderness at the foot of Mount Kenya, the Lewa Wildlife Conservancy.

In January 2020, we had the unique chance to visit the Lewa-Borana landscape in Kenya to find out about the local involvement of Zoo Zürich. What we have unearthed is a story of genuine friendship and common passion.

For more than two decades, Zoo Zürich and the pioneers in Kenya have collaborated on important projects. The zoo has helped to fund initiatives ranging from community development to education. And most importantly: wildlife protection.

Together with the local community, the conservationists are trying to answer pertinent questions: what are the effects of wildlife preservation on the survival of animal species? What are the benefits of entrepreneur programs as alternatives to farming? And what is the impact of sustainable eco-tourism at a local level? 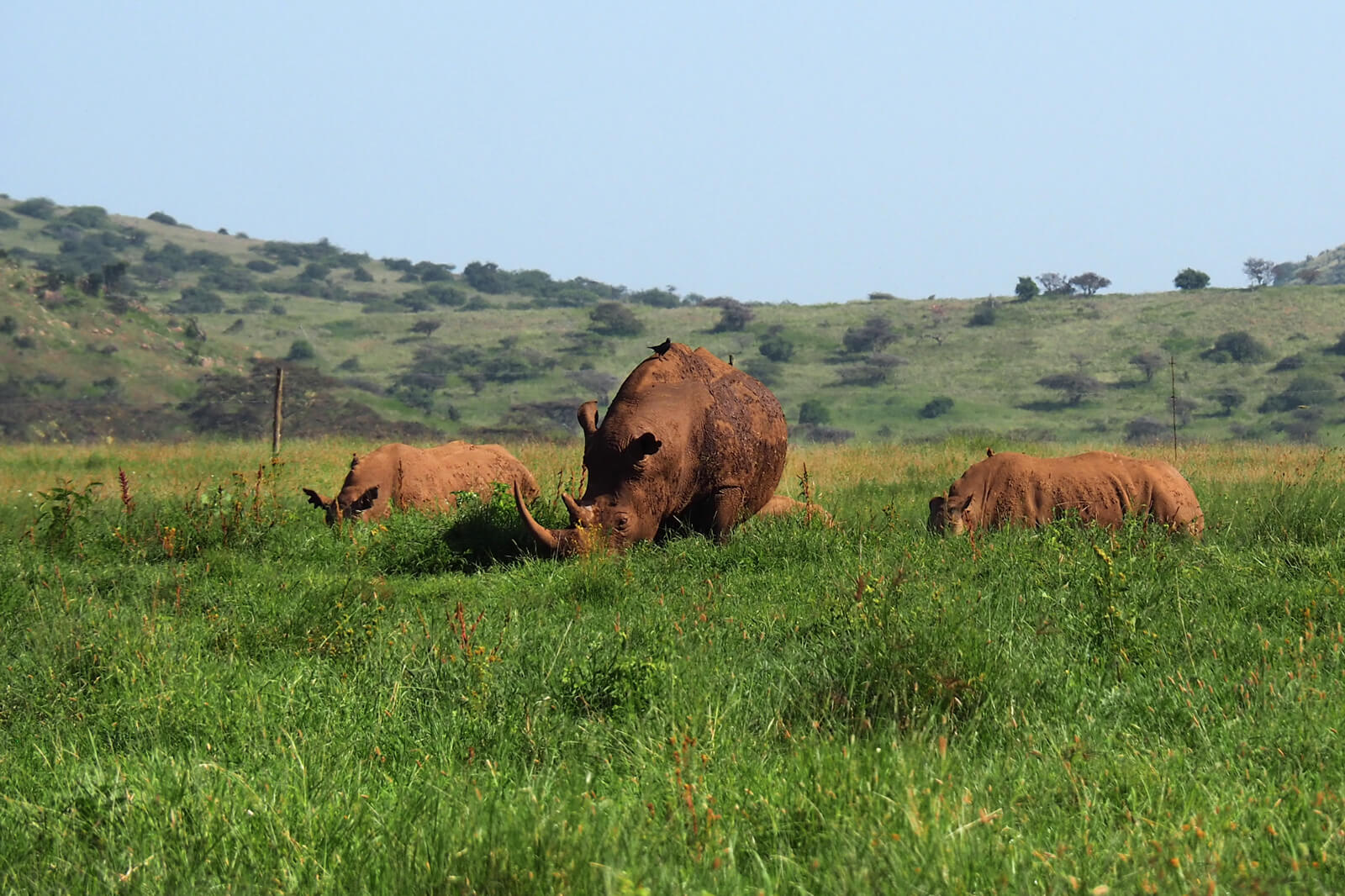 Conserving the black rhino population at the Lewa Wildlife Conservancy

For perspective, it helps to know that the Kenyan lands under guardianship by the Lewa non-profit are about the size of Canton Zug. (Compared to other wildlife parks on the African continent, Lewa does not make it into the top 50.)

The history of the Lewa Wildlife Conservancy cannot be explained without introducing its founder, Mr. Ian Craig. It was his father who had inherited the cattle farm on these agricultural lands. Ian himself was brought up at Ngiri House which his parents had built. This is the same idyllic premise that houses our delegation of journalists. 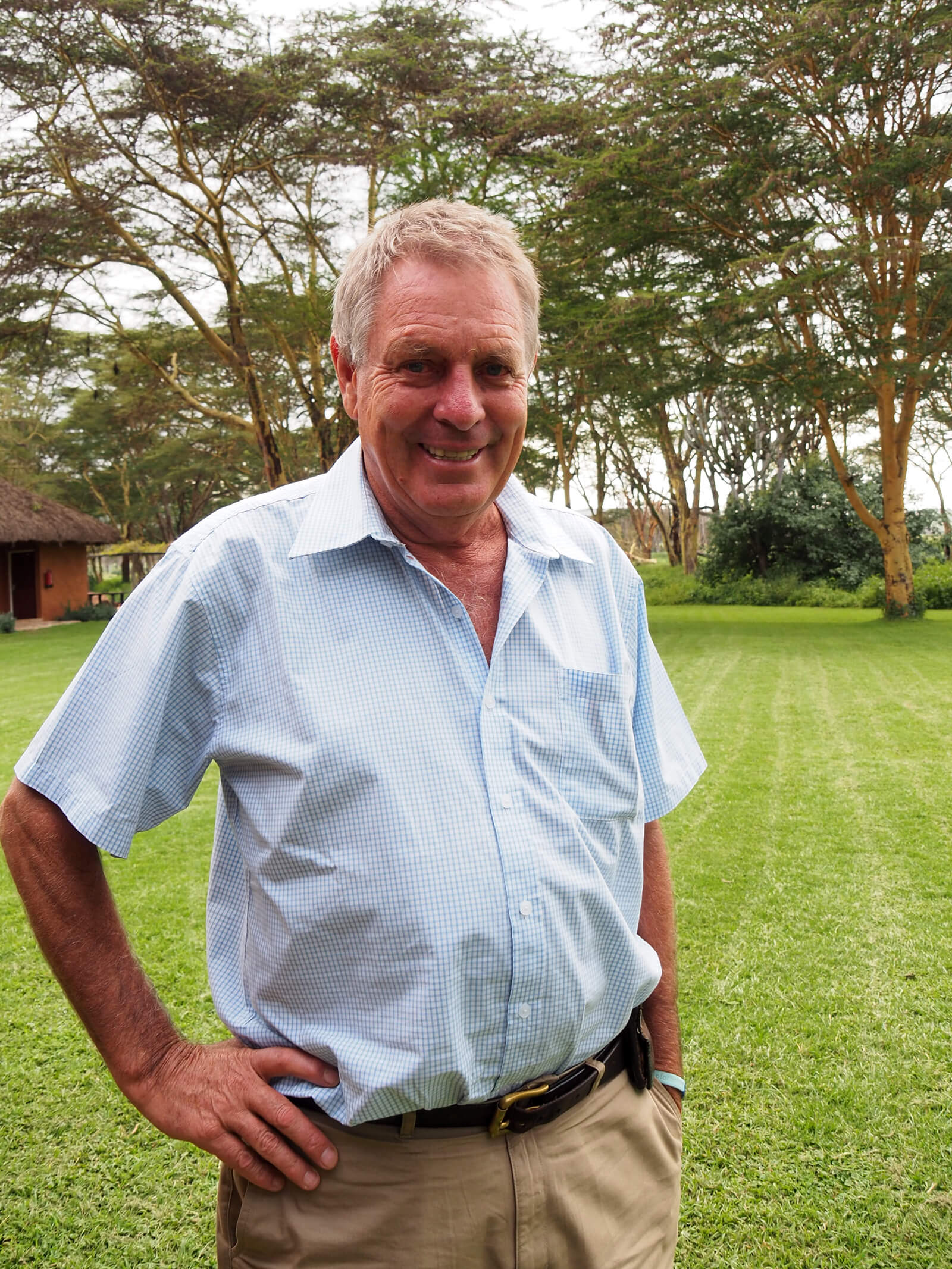 Fast forward to the 1980's, a time before there were any tourist camps on private lands in Kenya. At Lewa, the cattle was abusing the lands and there was a constant struggle with droughts. And by 1983, there were only an estimated 240 black rhinos left in Kenya, an unthinkable decrease from a population that once numbered 20'000.

Ian Craig decided to turn things around, believing that a community-owned tourist operation on his property would help alleviate the issues at hand. Around the same time, a retired English woman in Nairobi decided to invest into a conservation project. Along with an investor, Mrs. Anna Mertz funded a 5000-acre, fenced rhino sanctuary.

A fateful encounter took place when her husband, Karl Mertz, had to go to the hospital in 1984: his roommate was a zookeeper from Zoo Zürich! A friendship developed, allowing the zoo to see the Lewa project grow.

Meanwhile, Ian Craig along with Anna and Karl Mertz asked the Kenyan government for permission to capture 13 rhinos for conservation. Their idea was a success and they would soon run out of land. This led them to double up by expanding the rhino sanctuary onto Craig’s property. The Lewa wildlife sanctuary was founded in 1995, and the formal collaboration with Zoo Zürich started in 1998. To close the circle, our guide on this trip to Kenya, Martin Bucher, is the adult son of that very zookeeper who stayed at the hospital!

Here are five specific ways in which Zoo Zürich has supported the Lewa Wildlife Conservancy in Kenya through the decades:

The Lewa grounds are entirely fenced in, which keeps the 169 black rhinos from getting out. Special gates allow wildlife such as antelopes, giraffes and other larger animals to enter and leave as they please. 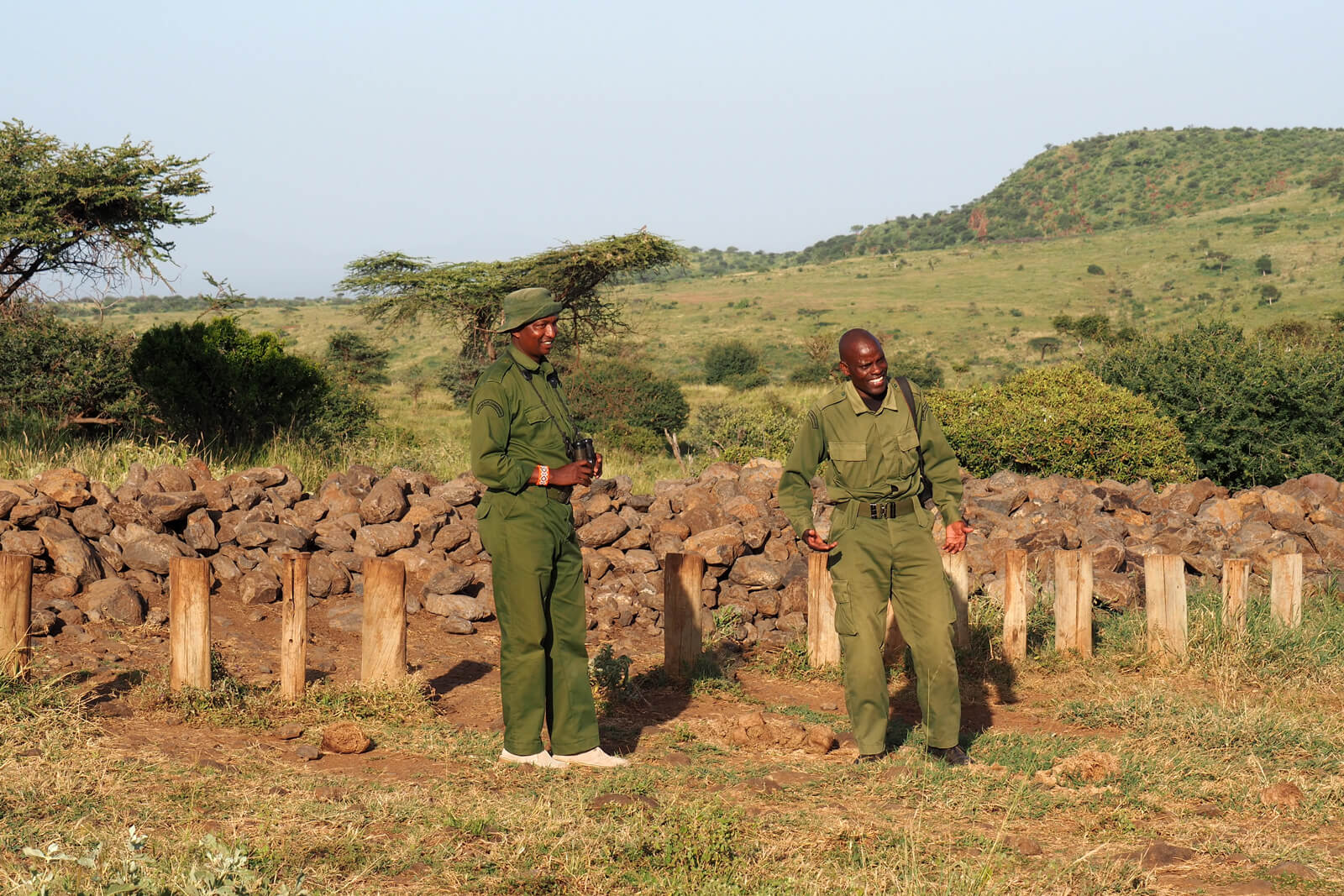 As we inspect one of these gates, we notice a herd of elephants which have crossed into the sanctuary earlier. The valleys and hills that make up Lewa are their migratory grounds, and these gates allow the elephants to follow their natural instinct. 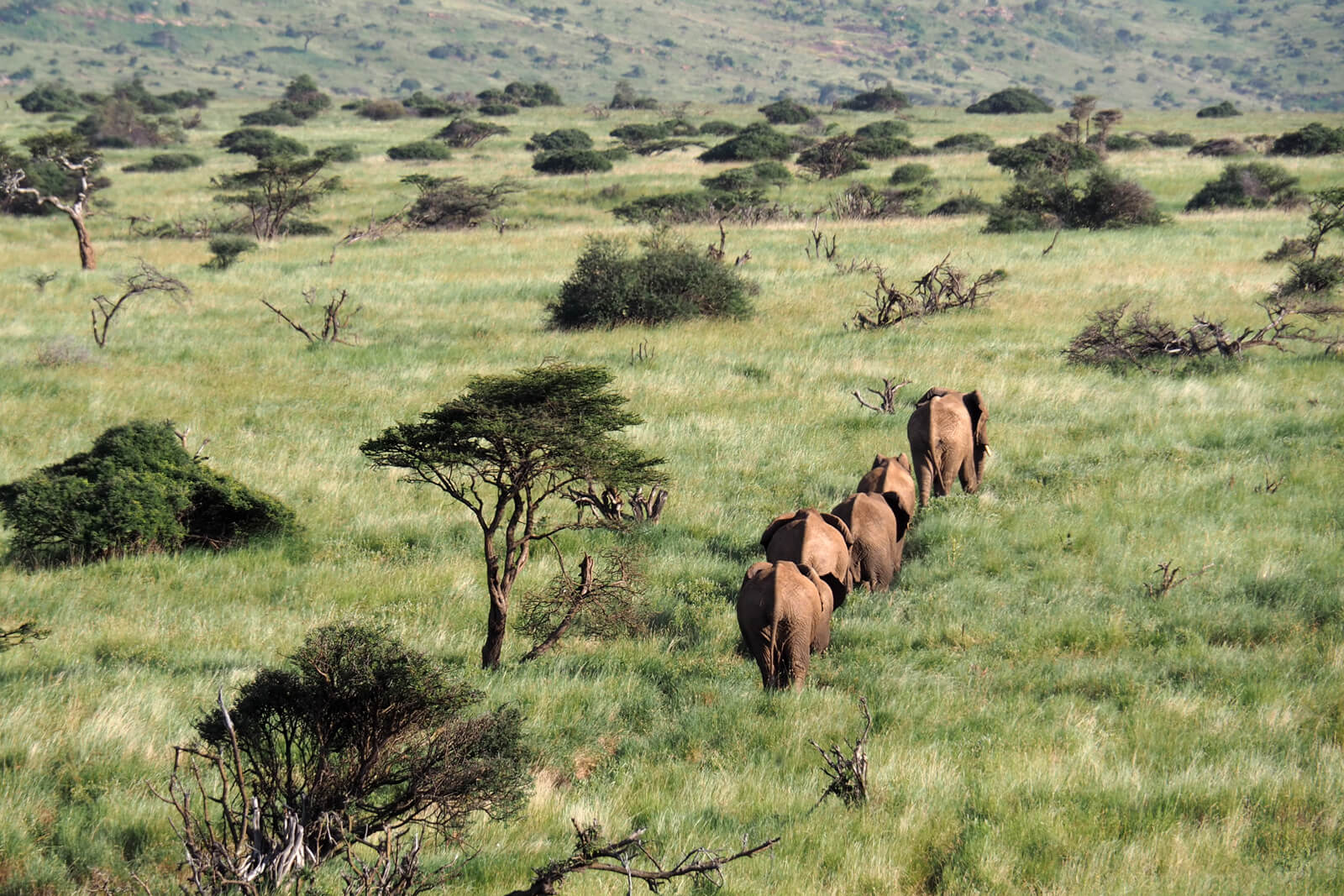 Protecting their black rhino residents from illegal poachers is a 24/7 job at Lewa. Thanks to donations from Zoo Zürich, the anti-poaching unit has been equipped with tracking dogs and other equipment. Even hours after an incident, these K9 units are able to pick up and track human scents. 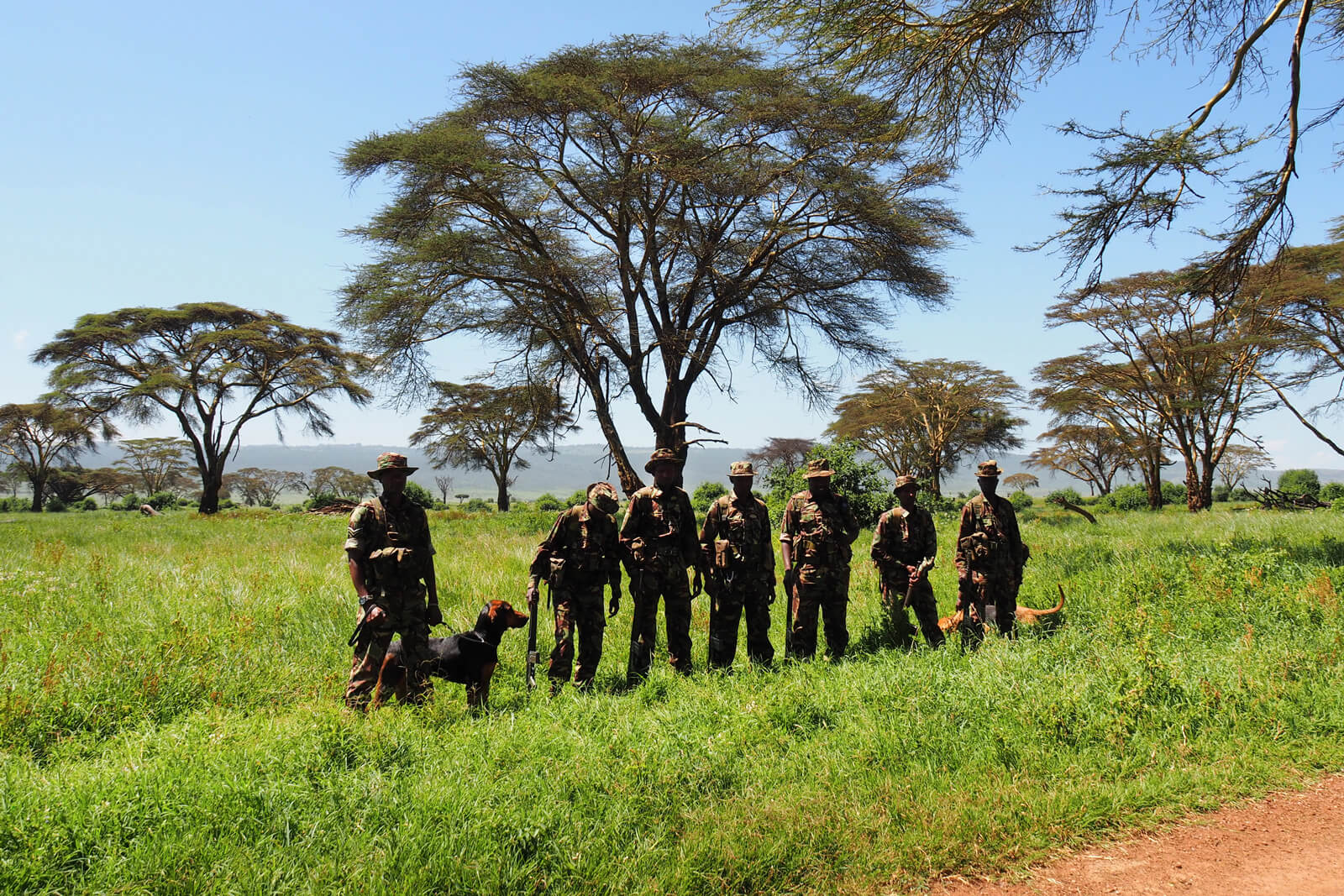 Since the criminal gangs involved in rhino poaching are active at night, the zoo has also sponsored night-vision cameras for the unit's helicopter. And finally, Zoo Zürich has been sponsoring the salaries of these brave men, allowing them to focus on the task at hand. 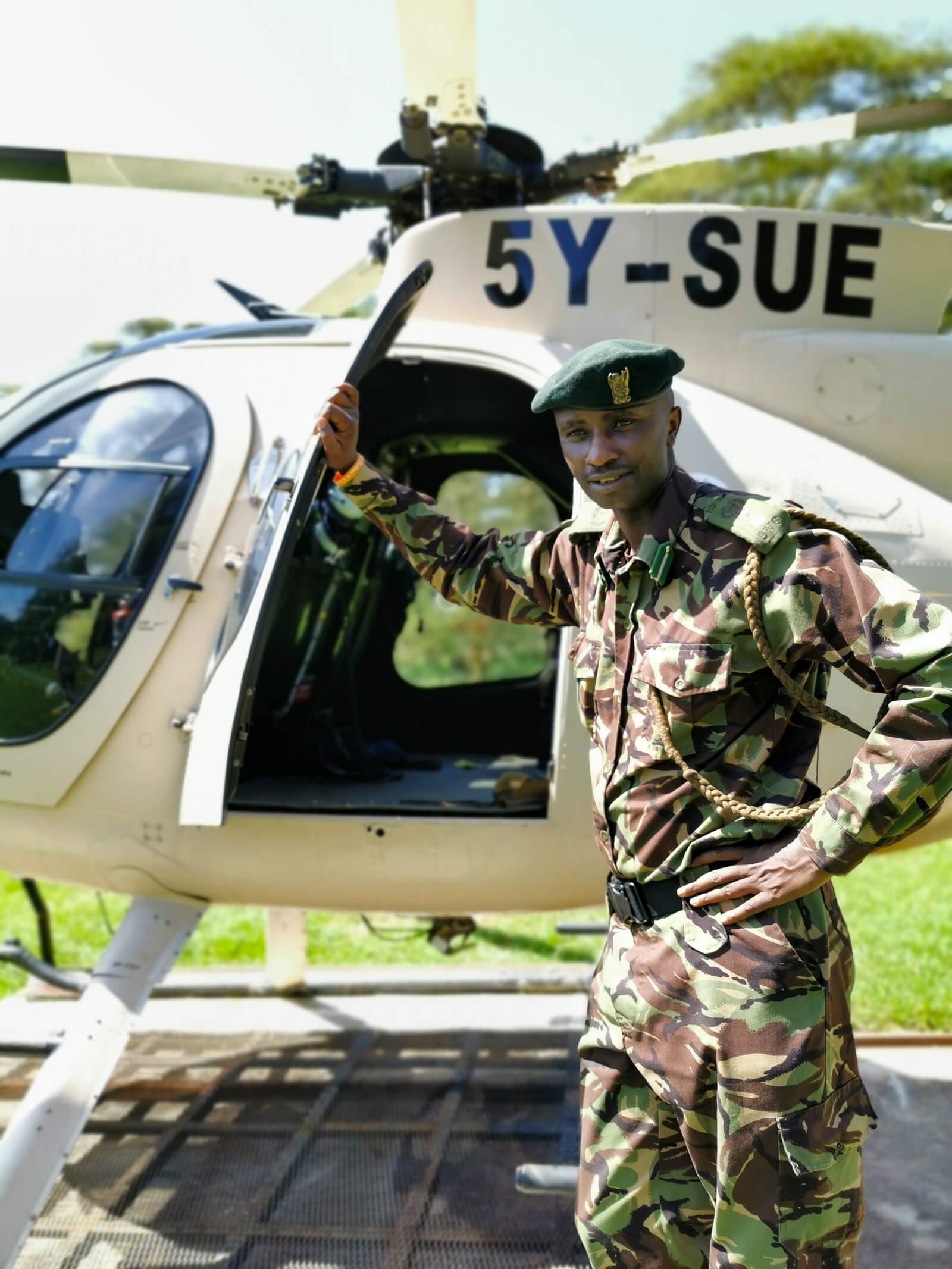 Thanks to the joint efforts by Lewa and its partners, Kenya is once again home to almost 800 black rhinos and 600 white rhinos.

The most rhino births have been recorded at Lewa in 2019. In fact, the rhino population is growing fast enough for animals to be relocated, such as to the Northern Rangelands Trust.

At one of the four clinics run by Lewa, we meet Daniel Attambo. The healthcare coordinator explains that the main goal is to improve access to health services to rural communities. "The main challenge is the long distances local residents have to walk to our facilities. It is not uncommon for women to have to walk more than 10 or 15 km to get healthcare."

Some of the major health risks at Lewa include chest infections, HIV, tuberculosis and water caused diseases such as diarrhea. While the Kenyan government does supply medical commodities, someone mentions that they were "never enough and never on time." 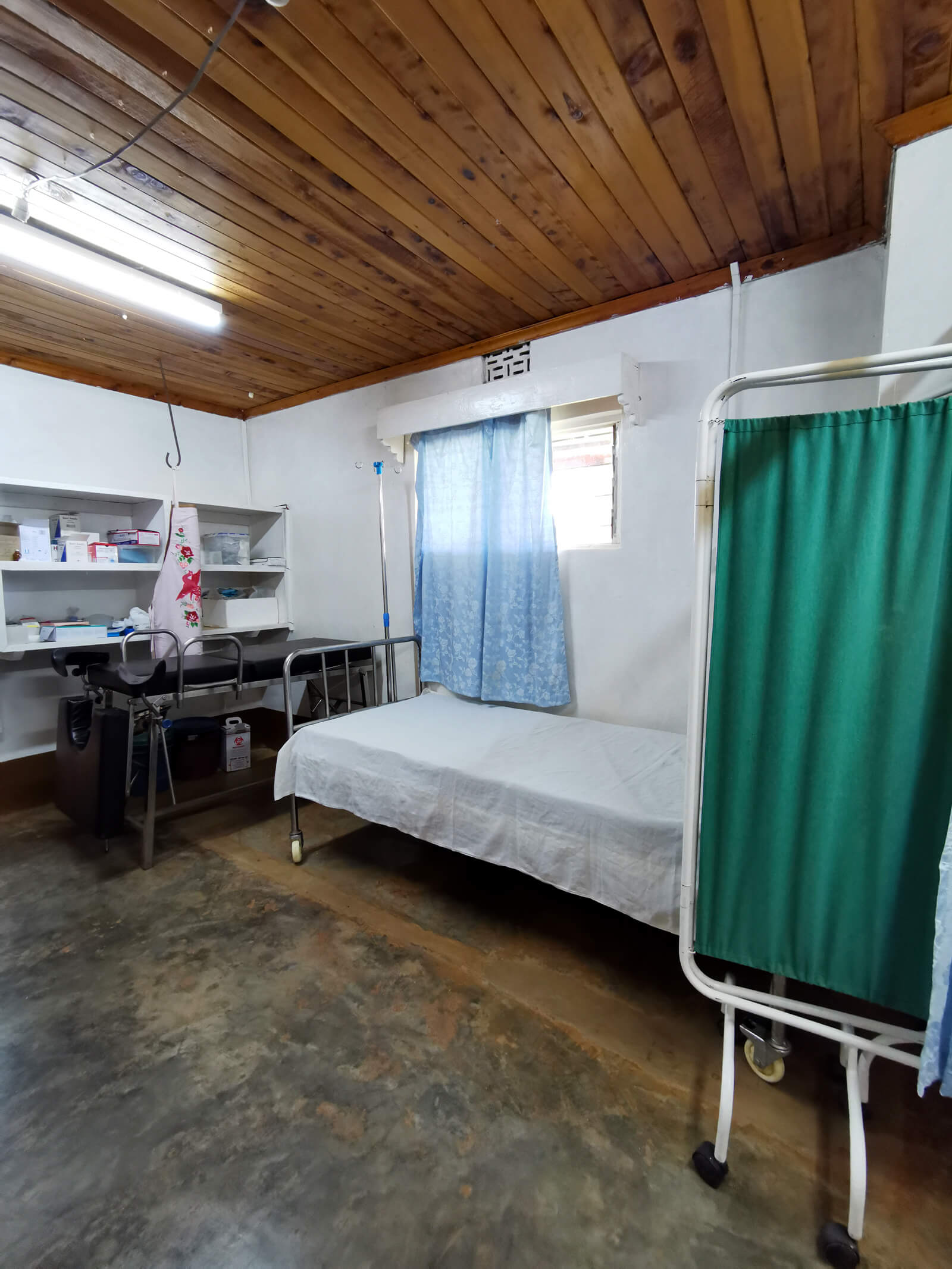 The Zoo Zürich donations help to provide healthcare to the 100’000 residents, roughly half of whom have been treated in 2019.

Another goal is to have mobile clinics for schools. Apart from deworming of school children, healthcare workers would teach children about hygiene and nutrition. When road accidents or human wildlife conflicts occur, ambulance services are available to rescue those involved. (Luckily, since people have learned to coexist with wildlife, only about five cases of animal attacks happen annually. Most of these take place outside of conservancy grounds.)

3. Educating the next generation

At the conservancy's community education center, we meet Purity Kinoti. The 29-year old is a graduate of the Lewa school system. In the years since, Purity has gained a master's degree and has returned to her roots.

As a scholarship coordinator at the Lewa Wildlife Conservancy, she is in charge of ensuring equal access to education. Peasant farmers can sometimes not even afford food, let alone send their children to school.

Having gone through difficult times of her own while growing up, Purity connects to students unlike anyone else. Our brief chat with Purity left a lasting impression: I have rarely met such an optimistic and positive person! 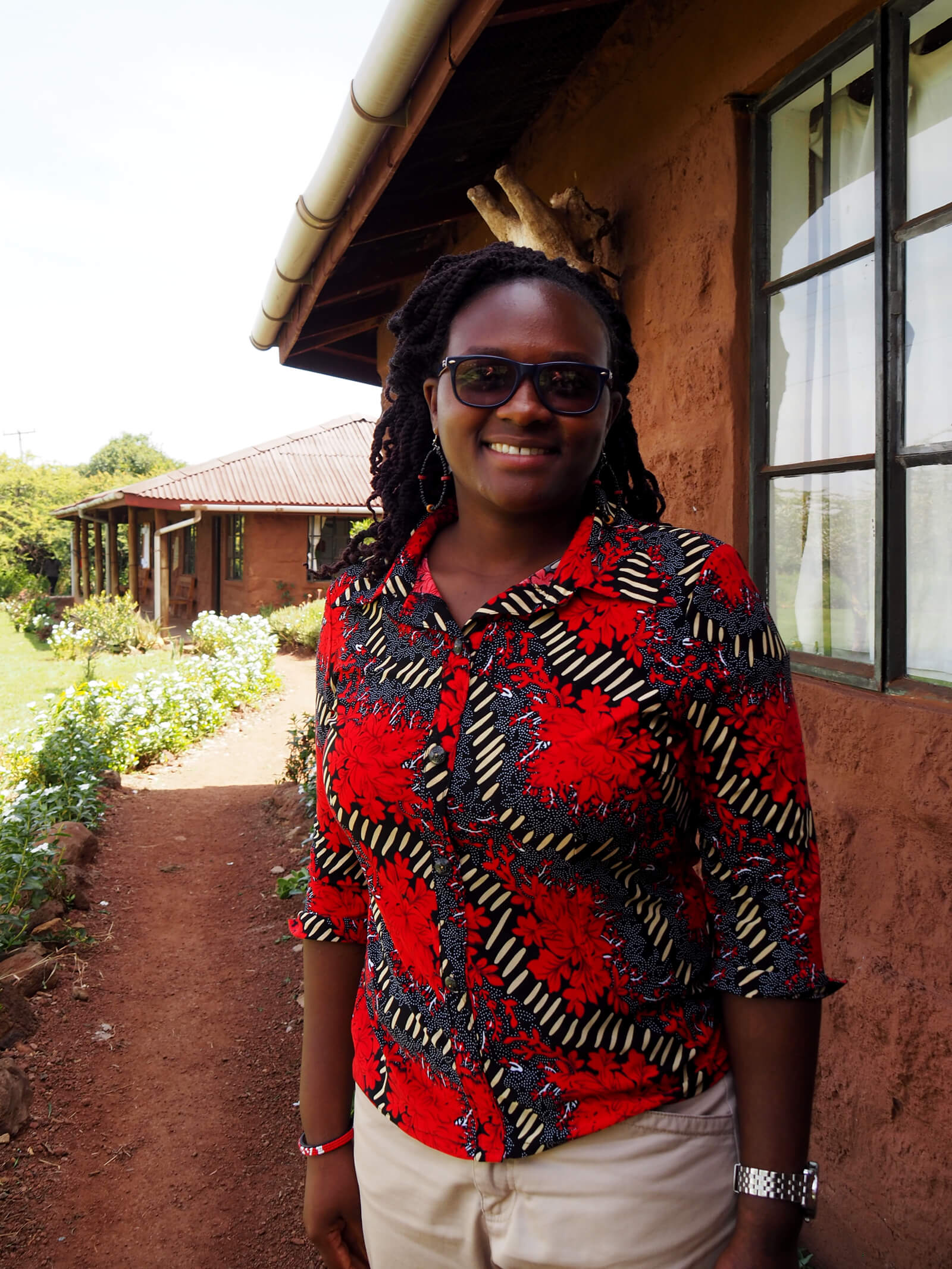 Faith Riunga is the head of Lewa's education program. She works with 23 different schools built by different donors, including Lewa and thus Zoo Zürich. Her mission: "We bridge the gap between what the government provides and what [school] is supposed to be."

Thanks to a digital literacy program, children are learning even when no teacher is present.

We have the chance to see this in action at the Subuiga School, a top school in the county. Some 400 students from the vicinity will walk from home to school every day. 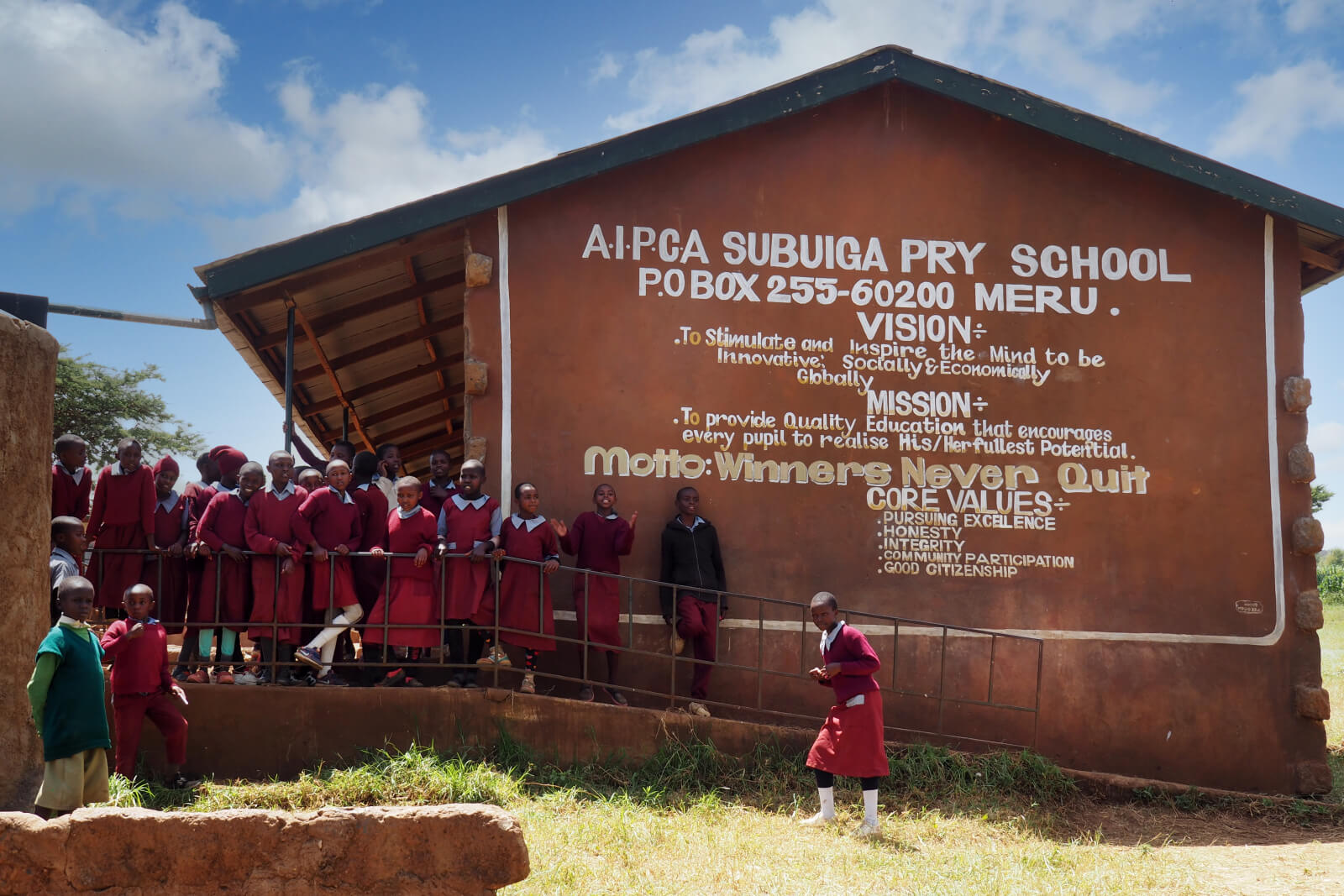 One at a time, school children would go up to a "smart" flat screen in the front of the classroom. They would pull up a Wikipedia style page about a particular topic, such as human anatomy. The entire class would then read out loud the information on the screen.

Faith sums up her biggest challenge: "Kids learn too fast, and they don't want to take breaks." Providing access to information is one way to keep them busy. Boxes of books circulate among the schools, and Faith describes how children are eager to soak up knowledge as a new box arrives.

When you visit the Lewa Savanne at Zoo Zürich, look out for the community education center. While much smaller in scale, it teaches some important lessons about the big questions at hand. One thing Switzerland has in common with Kenya is the language challenge: everything has to be translated from the local dialect to Swahili and finally to English...

To understand the role of tourism in Lewa’s development, we visit the Ngare Ndare Forest Trust at the foothills of Mount Kenya. This forest is the main water source for Lewa and contains century old fauna and flora. 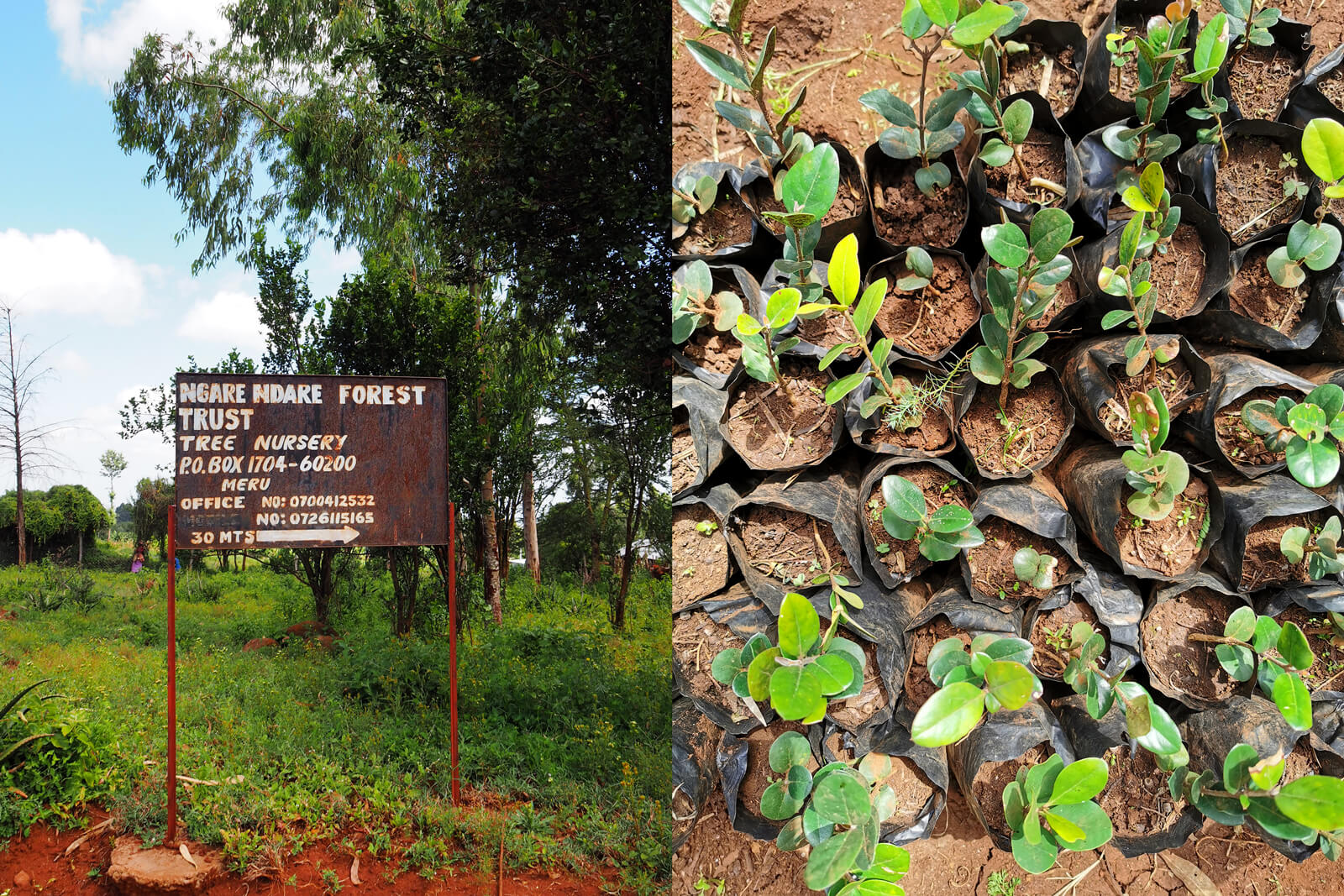 We learn that before the foundation of the 2004 trust, the local population would deplete the forest for firewood and other resources. With the forest under the ownership of local villages, rules were established. Locals can now apply at their community to become a forest partner. If approved, they will be permitted to use the forest for beekeeping, water sourcing or the collection of herbal medicines.

A nursery helps local residents to source their own trees and thus firefood, construction materials or simply fence posts. Each tree purchase is matched with a second tree, courtesy of the trust. Zoo Zürich has supported the nursery's security team for the past five years with uniforms and salaries. They have also used some of the donations to develop a mobile app which helps the 22 rangers track livestock.

The Ngare Ndare Forest has also opened a campsite and a canopy walk, with revenues being shared among the villages. The canopy walk experience allowed us to appreciate the forest while contributing to this ecotourism initiative. 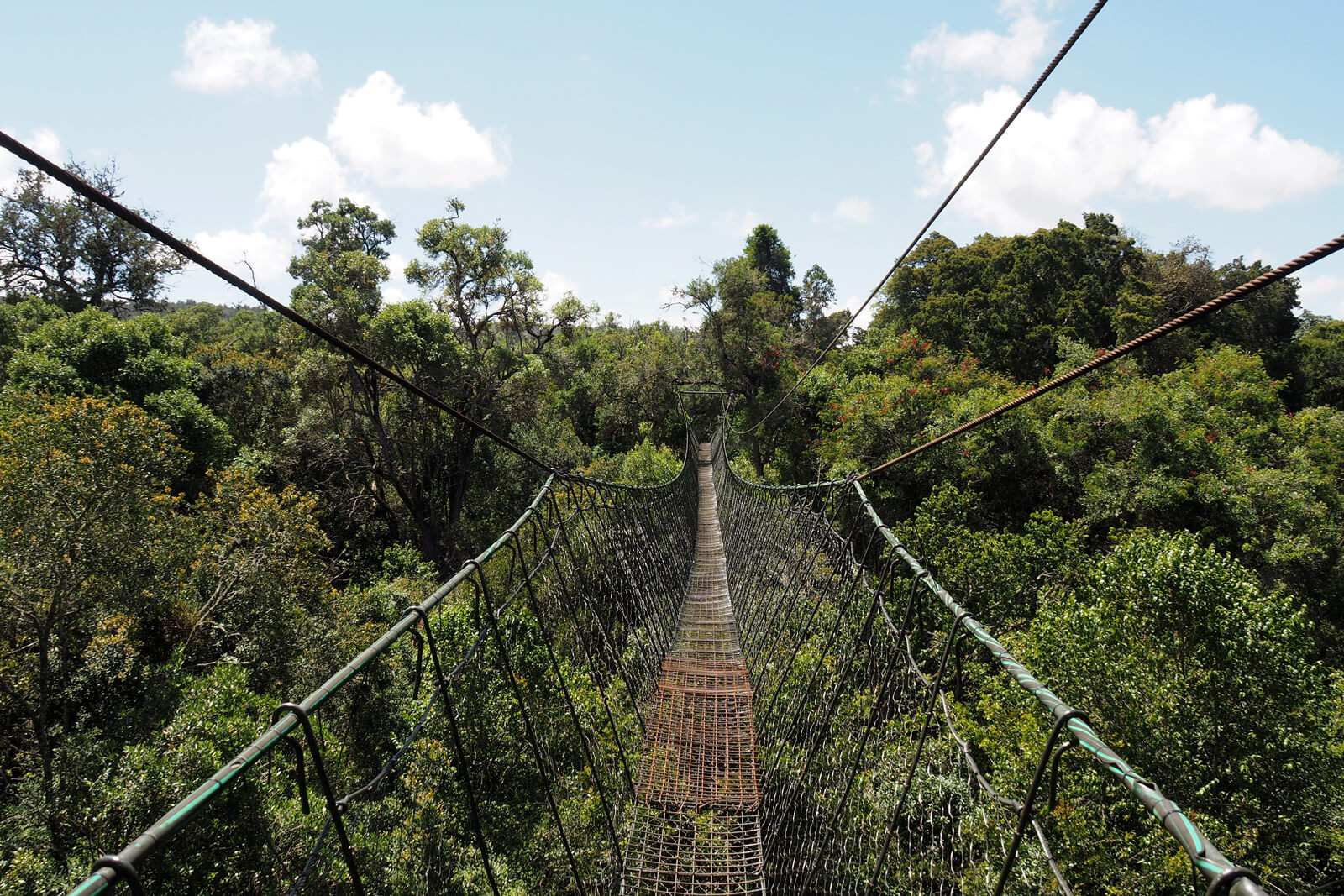 Overall, visitor’s access to the Lewa Wildlife Conservancy comes at a premium, therefore limiting the number of safari tourists. The ten lodges on Lewa premises are community owned and operated; tourism is making an impact at a local level.

“Women used to be here to be seen, but not to be heard. Eleven years ago, we realized the importance of women when it comes to conservation,” explains John Kinoti, Lewa’s Community Development Manager. 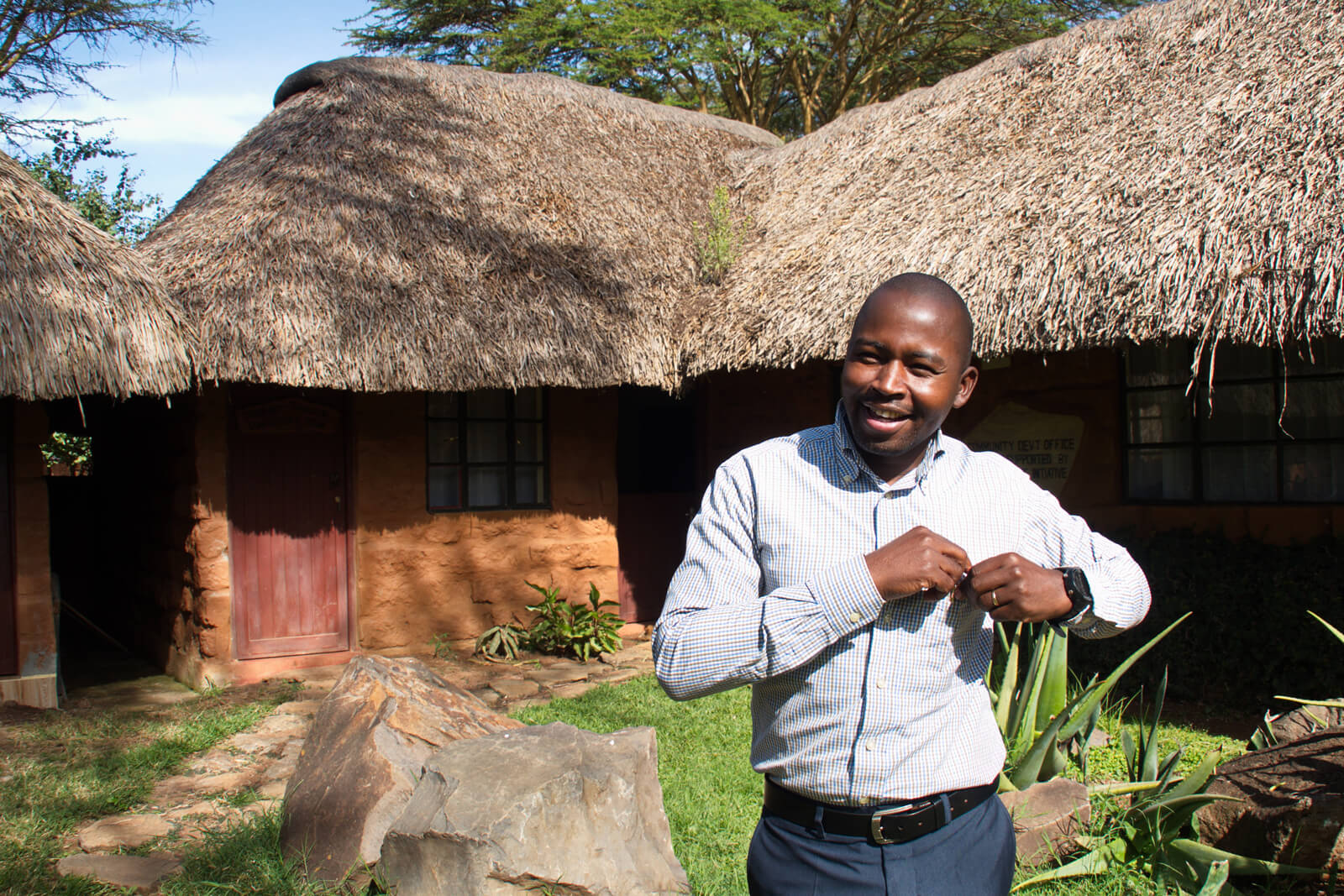 For instance, gathering firewood for cooking used to take up a big portion of someone’s day. A green energy program provides a biogas unit to each homestead. This contraption frees up precious time for women to engage in entrepreneurship. John’s entrepreneurship program now serves 1800 women who have founded 700 small businesses. 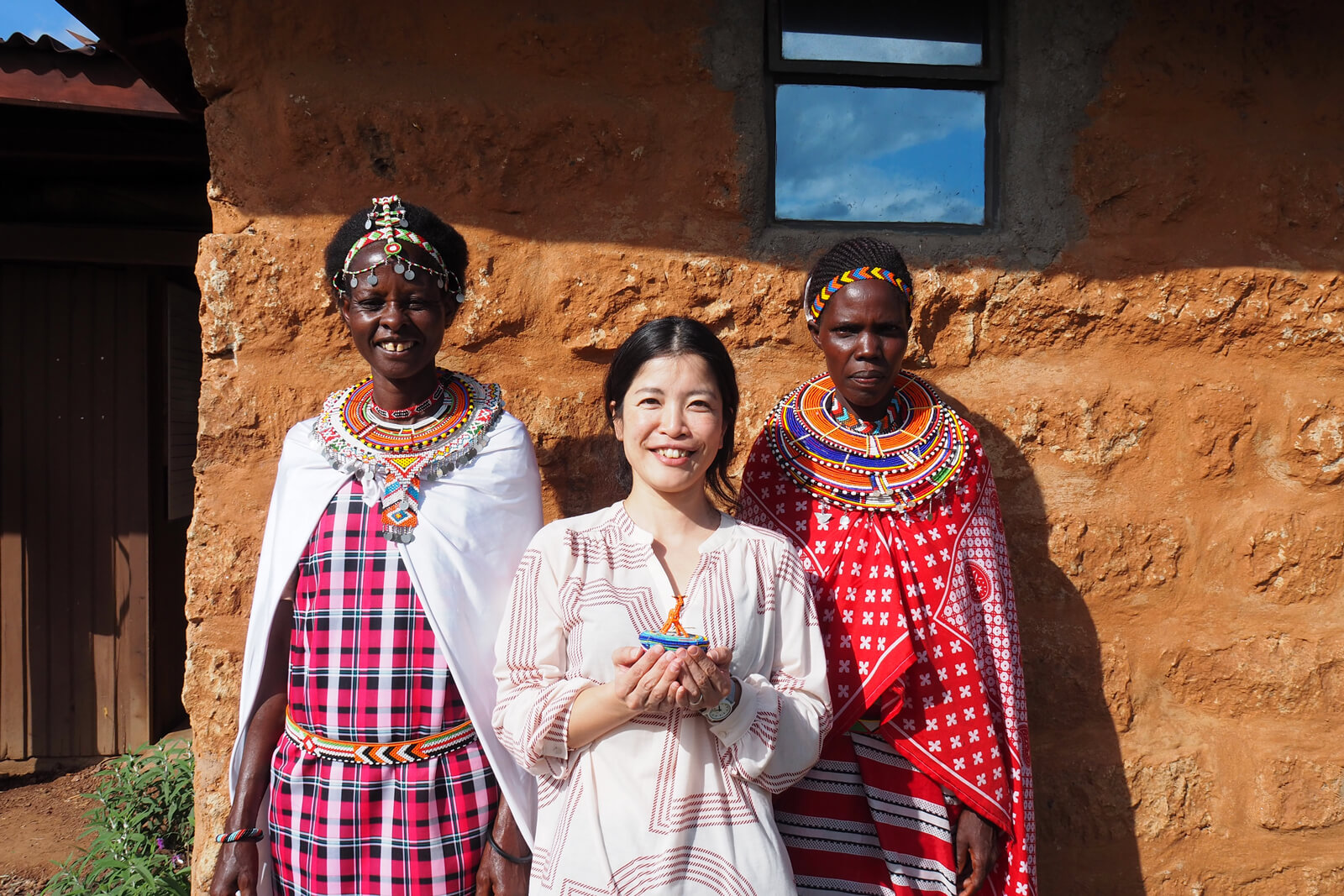 BeadWORKS is one local organization that allows crafty women to earn an income while working from home. We could not resist purchasing some of these intricate bead creations right there on site. But it is good to know that the products are also available at the Zoo Zürich gift shops, thereby sending money back to Lewa.

Ian Craig sums up the mission of Lewa: "Success is an elephant walking out of Lewa for 200 km, at his own free will. And everyone who meets him along the way values him."

A big thanks to everyone at Lewa who made us feel welcome during this once-in-a-lifetime experience! And thanks to Zoo Zürich for allowing us to research their long-term initiative. 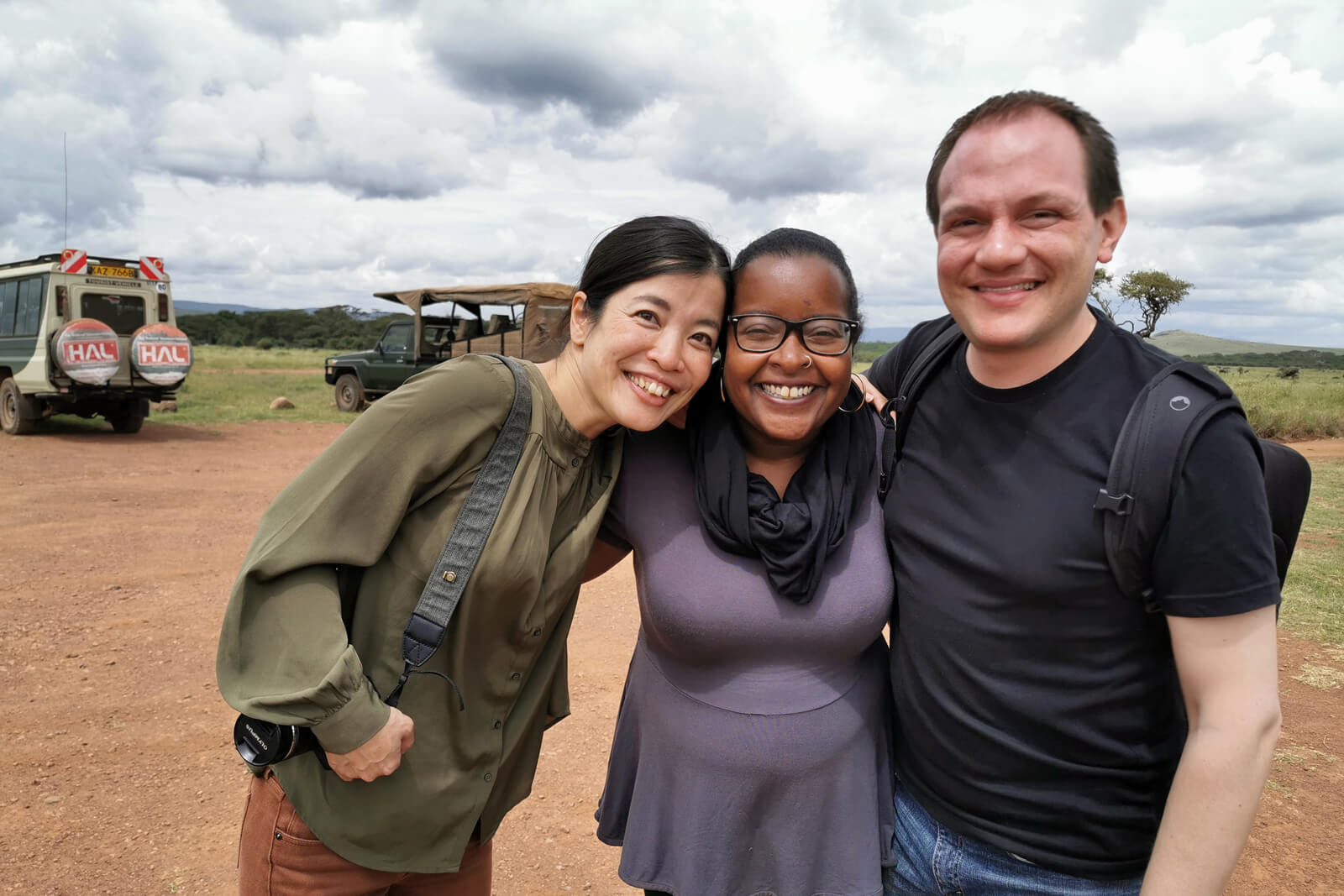 We talked to Anina Mutter, the original sustainable style warrior

To call Anina Mutter a multifaceted woman would be an understatement. This sustainable style warrior pursues a path worth following. Fondation Beyeler is a museum known for epic and often unique art exhibitions. These days, all the buzz is about the new exhibit: Paul Gauguin... What happens when you ask 150 photographers in Switzerland to show their favorite works of the past year? Something like photo17 is what happens...

Splash! Here are 8 lakes near Zurich for wild swimming

Manage Cookie Consent
To provide the best experience, we use technologies like cookies to store and/or access device information. Consenting to these technologies will allow us to process data such as browsing behavior or unique IDs on this site. Not consenting or withdrawing consent may adversely affect certain features and functions.
Manage options Manage services Manage vendors Read more about these purposes
View Preferences
{title} {title} {title}
37 Shares
Share35
Tweet
Share
Pin2
WhatsApp