There is no conclusive answer to the initial question. But maybe these more or less random facts about Switzerland will help you paint a picture of this nifty little country:

If you fail your practical driving exam three times, they make you visit a psychologist.

The world’s first C-section was reportedly performed in Switzerland around 1500.

In the life of Jacob Nufer and his pregnant wife, desperate times called for desperate measures: She was about to die giving birth, so he cut open her belly to release the child.

Refusing to take mandatory swimming lessons could be grounds for a denial of Swiss citizenship.

Switzerland’s tallest tree is located in Walenstadt. It is a Sequoia tree with staggering 48 meters in height.

The oldest wooden building in Europe is located in Schwyz: “Bethlehem” has been around for 729 years!

And Switzerland’s oldest library has been around since the 8th century. The UNESCO World Heritage protected Abbey Library in St. Gallen contains books and manuscripts dating back to Medieval times.

Albert Einstein, the Nobel Prize winning physicist, researcher and scientist, developed the Theory of Relativity while living in Bern.

Switzerland is the nation with the highest number of Nobel Prizes per capita in the world. Depending on the definition, over 100 Nobel Prizes have been awarded to persons or organizations with connections to Switzerland.

Apart from the place of birth, all Swiss have a unique Heimatort: The practice of assigning a “place of home” goes back to the middle of the 18th century, and it was likely the location where the ancestors lived at the time.

The rare Basler Dybli postal stamp is the first tricolor stamp ever issued worldwide. It went into circulation on July 1, 1845 with a denomination of 2.5 cents. Here’s the white dove on a mailbox in Basel:

The holes in Swiss cheese are known as eyes. Consequently, cheese without holes is known as “blind.”

Cheese has been produced in Switzerland’s Emmental Valley since the 13th century. To be certain that a cheese is original and not a fake, look for “Emmentaler AOP”.

Foundue was originally a peasant meal to use up hard cheese and old bread and is derived from the French word fondre, meaning “to melt”.

The insulation of the Monte Rosa SAC hut is world class: it takes 10 weeks after winterizing the hut for the indoor temperatures to drop to 5 degrees Celsius.

Prostitution is legal in Switzerland. Hence, employees in the so called “horizontal business sector” are required to pay Swiss income tax.

Some Swiss prisons use pink walls to calm the inmates, such as this one in Pfäffikon:

For even more knowledge, download our e-book with 77 interesting facts about Switzerland:

According to a statement from his agency obtained by Newly Swissed, George Clooney has resigned from his contract as Nescafé's spokesperson as of April 1, 2o1o: Fortunately, Nescafé was able to snatch... 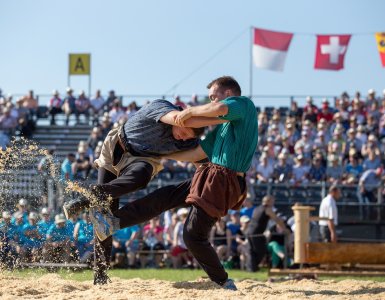 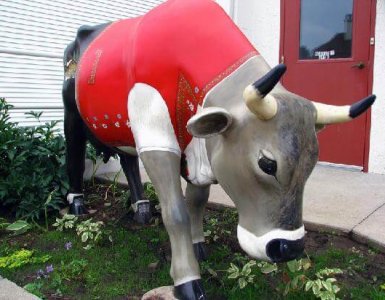 On their quest to travel around the world, our friends Oli and Rafael have now crossed from Asia to North America! And thanks to their trained eyes, they have found some rather interesting traces of Switzerland along...

Manage Cookie Consent
To provide the best experience, we use technologies like cookies to store and/or access device information. Consenting to these technologies will allow us to process data such as browsing behavior or unique IDs on this site. Not consenting or withdrawing consent may adversely affect certain features and functions.
Manage options Manage services Manage vendors Read more about these purposes
View Preferences
{title} {title} {title}
579 Shares
Share447
Tweet12
Share20
Pin100
WhatsApp