Sentiero del Castagno is the iconic chestnut path of Ticino

The air is crisp and the November fog has settled over many of Switzerland's cities.

Along with the colorful foliage that blankets the streets each day and is dutifully swept up by street cleaners, the smell of roasted chestnuts wafts through Switzerland's streets. The source: those green booths selling small packets of the noble Castanea roasted chestnut. Most Swiss people know that the Southern Swiss Canton of Ticino is covered in chestnut trees. And most of us believe that the nuts sold on the streets of Zürich, Basel, Bern and other cities are domestic.

However, these chestnuts are almost all from Italy, where roughly three varieties of chestnuts are cultivated exclusively for roasting. That said, in recent years, Ticino itself has experienced a chestnut renaissance.

If you are looking for a relaxing and rewarding way to spend an autumn day in Ticino, look no further than the Sentiero del Castagno hike.

I first did this hike about five years ago as a day trip from Zürich. Since then, nearly half an hour has been cut off the trip to Lugano thanks to the new Gotthard Base Tunnel. A few weeks ago, I once again ventured to Alto Malcantone, a small community at about 800 meters above sea in the mountains northwest of Lugano. This time, I got to learn about the history of chestnuts in Ticino.

These shrubs and trees were brought first to Italy and then the mountains of Ticino by the Romans more than 2000 years ago. Seen as an excellent source of calorie-rich food for both people and animals as well as fuel and building material chestnuts were grown en masse in groves everywhere. Ticino is a very mountainous area with communities often disconnected from each other. Also, Ticino did not play a vital role in any commerce routes. For these reasons, over 30 varieties of chestnuts were grown - some were excellent as pig feed while others were great for roasting and milling for use in bread and pasta. That the Sentiero del Castagno even exists is thanks to one man, Carlo Scheggia. A forester from Alto Malcantone, he has been fascinated by chestnut trees and their importance to Ticinese culture since his youth. He told me that up until the First World War, chestnuts played a vital role in the local diet. However, with the opening of trade after the war and the advent of prepared food, the chestnut groves became derelict. Within a short amount of time, the beech, birch and other trees, as well as shrubs, started to pop up in the groves and vines began to choke out the chestnut trees.

Many trees were lost in this period until Scheggia was able to convince the municipality and local landowners of the economic value of cultivating these trees again. Up to date in Alto Malcantone, about 100 hectares have come under re-cultivation. And in all of Ticino, about 250 hectares. In Malcantone, the 100 hectares represent about a quarter of the total area that used to be farmed for chestnuts.

Along with the clearing of the groves and replanting of trees, gràs are also being restored. A grà is a two-story building used for drying chestnuts so they can be milled into a flour. This method of preservation is essential in order not to lose the circa 40 tonnes of chestnuts collected by people who get paid about three francs per kilogram. Today, there is an approximately 14 km trail through chestnut groves with information plaques. Along the way, hikers are allowed to collect chestnuts, though you will need to wait until after November 11th to pick up chestnuts off of privately owned property without asking permission.

If you are not able to get to Arosio in Alto Malcantone this autumn, plan a trip to the Festa del Grà in mid-October 2019. At this festival, you will also be able to try local fair and even a beer made from local chestnuts.

While you are in Ticino, I also highly recommend visiting the Grand Cafe al Porto for its vermicelli and other chestnut-based desserts. Buon Apetito! 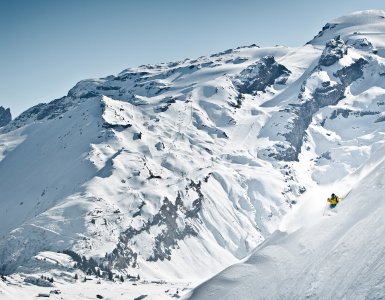 Freeride skiing in Engelberg: how and where to try it

If there's a next-level experience for skiers, it would have to be freeride skiing in Engelberg. Why The Chedi Andermatt deserves each of its five stars

Few hotels in Switzerland boast a reputation as stellar as The Chedi Andermatt. Whether from hearsay or from those privy enough to have lodged there... Manage Cookie Consent
To provide the best experience, we use technologies like cookies to store and/or access device information. Consenting to these technologies will allow us to process data such as browsing behavior or unique IDs on this site. Not consenting or withdrawing consent may adversely affect certain features and functions.
Manage options Manage services Manage vendors Read more about these purposes
View Preferences
{title} {title} {title}
74 Shares
Share69
Tweet1
Share
Pin4
WhatsApp