Swiss engineered On shoes allow you to run on clouds

In terms of country brand power, the label Switzerland (Swiss Made/Made in Switzerland) is one of the most valuable. It brings to mind quality, precision, and stability.

One word that it generally does not bring to mind is engineering. This word seems to belong to our Germanic car-manufacturing cousins to the north: Audi, BMW, Mercedes, Porsche, and Volkswagen have the monopoly on the term engineering.

Swiss precision and German engineering: Well, that used to be the case. Welcome On shoes.

On is not a new Swiss car, but it is a way of mobility. On is the only Swiss running shoe and proudly features the tag "Engineered in Switzerland" on every shoe. In case you're wondering, K-Swiss is not a Swiss company, though the original shoe was created by two Swiss brothers who immigrated to California and started making tennis shoes.

I got my first pair of On's in August 2011. After a minor, but nonetheless worrying knee injury, I had two weeks to train for my next marathon - the Jungfrau Marathon. Opening up the box, I could tell this wasn't my ordinary shoe. Each pair of shoes comes with an owner card, and you become part of the “Cloud”.

The back of the left shoe features the On "o", and the back of the right shoe has an "n". When by chance you happen to stand still, which I must admit does not happen very often, you spell “On”. The shoes are also intelligent because if you put them on the wrong feet, they will spell “nO”!

On's soles feature the shoe's key piece of engineering, which the company has patented as CloudTec: A series of rubber composite loops with a corrugated inner side.

A clever marketing gimmick, you think? Quite the opposite.

Engineered is more than a catchword meant to spark interest. One of the shoe's developers, Olivier Bernhard, came up with the idea when the pain in his knees made running more of a punishment than the enjoyment it once was. With a track record as inarguably the most successful Swiss duathlete and triathlete, Bernhard had identified the gaps in running shoe technology that had contributed to his pains.

He realized though that he could run on sandy surfaces and paths which would give a little. This gave him the idea of the unique sole based on circular rubber elements that absorb both the vertical and horizontal shocks that runners incur every time they go running.

Since the mid-2000s, running shoe companies have been marketing minimalist shoes in an attempt to simulate barefoot running. Nike has its "Nike Free" series, which allows the foot to bend and flex more than in traditional shoes. Vibram "Five Fingers", partly thanks to Christoph McDougall’s book Born to Run, has surged in popularity, but they also ignore any shock absorption.

Opinions are split on shock absorption. Minimalist runners believe that the human body through proper running techniques should be able to do all of that. Traditional shoe companies and many doctors will say that the body was not designed to do that. Both ignore one of the fundamental facts about the world we live in today: It’s flat and hard.

Few of us are running on uneven surfaces that give with each strike like a sandy beach or a grassy pasture. Then, of course, we lack the calluses that protected our feet thousands of years ago. We have become more sensitive to the ground under our feet. On finds the middle ground between these camps.

On’s engineered and patented rubber coils give way and absorb the vertical and horizontal shock. Traditional shoes only take care of the vertical. The Swiss engineers found out that it is actually the horizontal shock that causes a large degree of injury by damaging the foot’s musculature.

Traditionally, the horizontal shock was taken care of by softer surfaces, which is why running on sandy beaches, though more difficult, is not painful. The shoes’ uppers and inner soles do not try to artificially support the foot, but rather leave the musculature to strengthen, find its own stability, and support the body. In a way, it is core training for your feet.

I’ve been running in On's since 2011 and I have to admit I am convinced of the advantages offered by the shoe’s engineering. I’m running faster and with less recovery time after competitive running events.

At the Brienzerseelauf in October last year, I trimmed a full 15 minutes off my best time from the year before. Now, these claims are not just mine, but have also been tested and proven by independent research at the Federal Institute of Technology (ETH) in Zurich and Swiss Federal Laboratories for Materials Science and Technology (EMPA). The ETH results showed that on average, the heart rate of runners while running was two beats less in On's than with other shoes, and the EMPA study found that the shoes absorbed 30% more shock. 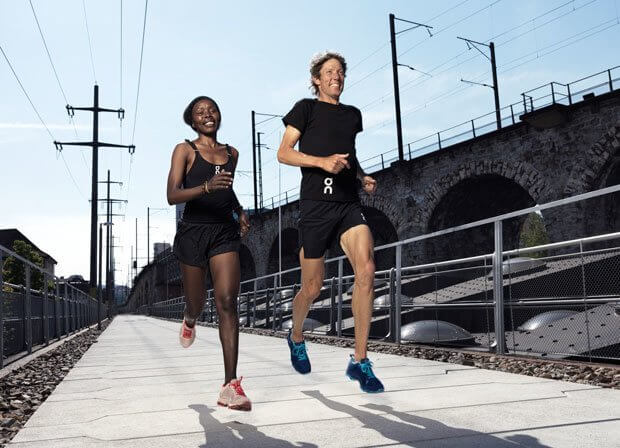 The other thing that I’ve found with On's is that they support front foot running. Again, there has been a huge debate about running techniques in the world of human kinesiology for years. To run faster, a runner can increase his or her stride and land on the heel of the foot, and roll off to the front of the foot.

The problem here is that landing on the heel means that the knee is usually straight and the shock from the impact travels from the heel up into the knee and hip joints and can even cause back pain. If the runner lands on the middle to the front of the foot, the arch in the foot, the toes, and the bent legs will naturally absorb a great deal of the shock.

Essentially, the feet and legs act like a spring. A Harvard study proved for the first time that front-foot runners are 66% less likely to suffer common running injuries than heel-strikers. A shoe that promotes front-foot running and helps prevent injury is one of the main features I value about On's.

Of course, shoes (like cars) rely on more than just their engineering to sell. On is no exception. The shoe’s appearance is a product of Zurich-based designer Thilo Alex Brunner, who won the 2011 Swiss Federal Design Award. At the presentation of the award by the Federal Office of Culture, Brunner’s design of the On's was specifically mentioned. In 2010, On won the ISPO Innovation Award in Munich and has since then also been entered into the Zurich’s Museum of Design’s collection.

For their part, the three founding members of On, namely David Alleman, Olivier Bernhard, and Caspar Coppetti, are continually enhancing and testing the shoes and making alterations to ensure the best quality run for anyone running on CloudTec today and in the future.

With spring upon us, and running events occurring almost every weekend, I can highly recommend picking up a pair of On's and getting out there.

In short, you’ll run faster, safer, and better. If those aren’t reasons enough to try On's, their fashionable color combinations mean they also look great. Running with On's is like running on clouds and makes running a pleasure. Visiting the “House of Friction” Exhibit in St. Gallen

Swiss artist Christoph Büchel is known for creating rather challenging exhibits which require a good physical condition to manoeuvre... 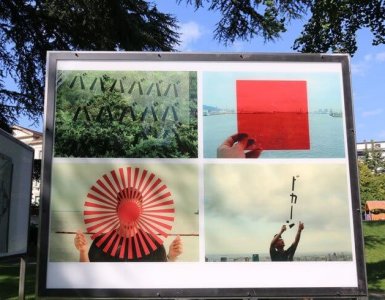 Impressive Street Art at the Festival IMAGES in Vevey