What Swiss businessman (and millionaire) Ueli Anliker calls the car of his dreams appears to be more of a nightmare for me... But anyway, he has taken the classy, exclusive Mercedes McLaren SLR, and has created a monster: 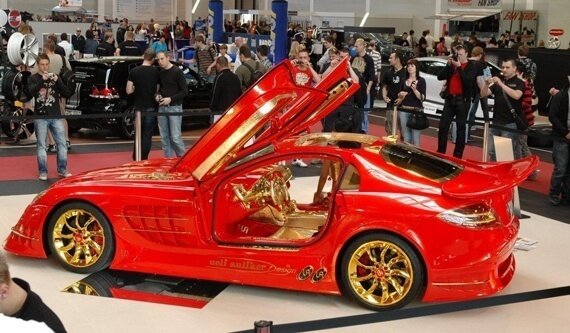 Apparently, Anliker was not satisfied with what the car had to offer, and so he set out on a mission to transform it into his vision of the perfect SLR. A team of 35 people worked on it, spending 30'000 hours and over £3.5 million ($5.5 million)! The transformed vehicle is called the Anliker McLaren SLR 999 Red Gold Dream. 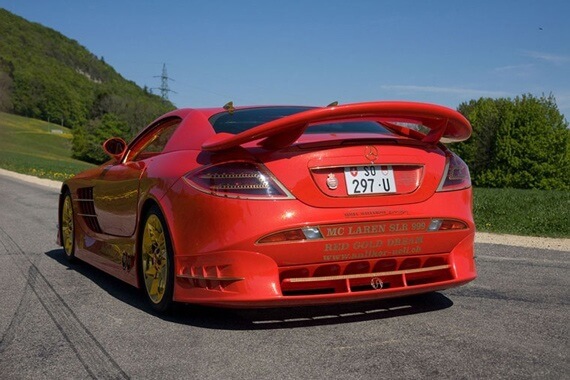 He has made changes to the paintwork, wheels, interiors and even the engine. Twenty-five layers of red paint with 5 kg of gold dust were used on the body of the car. The wheels, headlights and door sills are all covered in 24 carat gold. The indicators inside the car are jeweled, the seat covers and interiors gold trimmed, and the switchgear is covered in rubies. 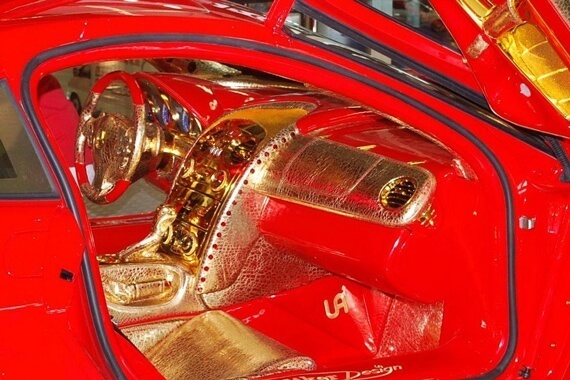 The power on the existing 5.4 liter engine has been boosted to 999 bhp from 640 bhp. This has caused the top speed to increase to 210 mph. A total of 600 rubies have been used in re-decorating the exclusive Mercedes.

The modified car is rather jarring to look at, and many are not too happy with it. Top Gear is quoted to have called the paintwork as something that "could burn a hole through your eyes and your nightmares."

What is surprising is that he expects someone to be interested in owning it. Nevertheless, the Red Gold Dream is being quoted as the world's most expensive vehicle on the open market, as the Swiss businessman is expecting a minimum of £7 million ($11 million) for his dream vehicle! The purpose of the scything competition is to keep traditional farming methods alive. Scything used to be a traditional way of clearing long grass, herbs and weeds...

Manage Cookie Consent
To provide the best experience, we use technologies like cookies to store and/or access device information. Consenting to these technologies will allow us to process data such as browsing behavior or unique IDs on this site. Not consenting or withdrawing consent may adversely affect certain features and functions.
Manage options Manage services Manage vendors Read more about these purposes
View Preferences
{title} {title} {title}
54 Shares
Share4
Tweet
Share
Pin50
WhatsApp