In the first post of traditions that define Swiss culture, I have covered a giant sled race and a bread bun tossing tradition. The list goes on chronologically with traditions taking place between Ash Wednesday and mid-April.

Those looking for costumed brass bands and confetti will find their answers in our post about carnival parades in Switzerland. The following list covers alpine rituals, some of which date back to Celtic times.

Here are even more winter traditions that define Swiss culture during the cold months:

In the Löschental, a part of the Upper Valais, Tschäggättä are known to spread fear and terror. As they chase through the local villages every night, these creatures wear scary wooden masks, animal skins, and a bell around their waists.

The parade from Blatten to Ferden on Fat Thursday presents a chance to experience the Tschäggättä. Also, there is a carnival procession in the town of Wiler the following Saturday afternoon. Mark my words: if you don’t run away fast enough, you are at serious risk of being hugged by a hairy monster.

While researching the various carnivals in Switzerland, I came across a rather odd tradition in Herisau. Let me try to sum up Gidio Hosestoss: it’s a funeral procession for a deceased man who had choked on a stolen Läckerli cookie.

For more than 150 years, Ash Wednesday marks the sending-off of Herisau’s most famous resident: Gidio Hosestoss. In the parade through the old town, school children will pull the hearse that is being followed by mourning relatives.

One of the youngsters, the Gidiopfarrer, has the task of rehearsing a eulogy where he cunningly incorporates the previous year’s happenings in Herisau.

This local tradition in Splügen is a highlight for many school children. In the morning, they go from house to house, collecting sweets. But they’d better be careful as in the afternoon, the scary Pschuurirolli appear.

These are local bachelors disguised in furs and sporting bells around their waists. During this fertility tradition, these “beasts” have only one thing in mind: to capture unmarried women and children and to blacken their faces with ash!

In the evening, those same bachelors dress like women and men. Residents visited by a Männli und Wibli couple are supposed to give them eggs - unless they recognize who is below the costume.

This pyromaniac festival takes place outside of carnival season. Every Sunday night, just hours before Basler Fasnacht kicks off, the town of Liestal quite literally goes up in flames.

This parade of torches was invented in 1924 by a local baker. He used the Chien wood preferred by bakers to create large Bäse brooms, hence this tradition’s name. We have collected lots of impressions and how to see Chienbäse.

On the first Saturday of Lent, the local boys create discs from trunks of alder and oak wood. This ritual is in preparation for a Pagan tradition called Scheibenschlagen - the hitting of discs unique to this town in Grisons.

After youth mass, the boys would converge on the Chistatscha, an elevated spot, where the discs are burned until they glow ember. With a type of golf swing made of hazelwood, each boy then hits a disc towards the valley, meanwhile making a wish involving a girl’s name. Down in the village, the girls try to tell the future as they watch hundreds of glowing discs spin across the night sky.

Chalandamarz in the Engadine (March 1)

Eastern Switzerland is home to one charming “Bell Dorado.” Usually, every March 1, boys will walk the streets and alleys with bells strapped around their waists. They aim to create as much noise as possible. That’s because the belief behind this tradition is that the noise will make evil spirits vanish, hence opening the stage for springtime.

This ancient tradition in the Albula and Engadine valleys, the Val Mustair and Oberhalbstein is rooted in Pagan beliefs. The most iconic setting to catch the bell boys is Guarda in the Lower Engadine. The popular children’s book, Schellen-Ursli, tells the story of one of those bell boys.

Every year on March 6, the school kids light up the Aabach creek in Ermensee. Their wooden floats are decorated with candles and will silently float down the stream where they are retrieved. The idea behind this quiet ritual is to send the light “down the creek” as it will no longer be required to light up the indoors.

This living tradition dates back to the onset of the 19th century and starts with a communal effort. About halfway through Lent, Appenzell and surrounding villages’ school children are tasked with collecting anything burnable. From untreated wood to paper and cardboard, on the fourth Sunday during Lent, the collections are stacked on several large piles.

On top of each pile, look out for the explosive Funkebaabe character, which symbolizes winter. The point is to create an explosion and chase away winter, but Funkensonntag is about much more.

Towns such as Ried have torch parades, some kids can be seen smoking for the first time (!), and then, there is the pure spectacle of oversize bonfires lighting up the night.

The quintessential spring tradition of Zürich involves elaborate parades featuring the historic guilds. There is a children’s parade on Sunday. And on Monday, a city-wide holiday, the main parade showcases men (and some women) in medieval costumes, riding horses and wagons.

A kind of Swiss Groundhog Day, the climax of Sechseläuten is the ritual burning of a snowman on top of a giant bonfire. The shorter the time until its head explodes, the better the expected weather conditions for summer.

In the aftermath of the Monday parade, many locals will meet up at the bonfire in front of the opera house for a down-to-earth tradition: the "common people" of Zürich will BBQ sausages in the massive fire.

Which of these Swiss winter traditions would you like to witness in your lifetime? 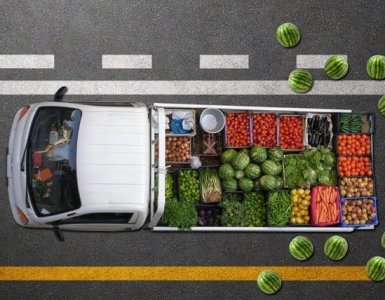 It is beyond my comprehension why Swiss drivers on a busy interstate would risk their lives to collect a bunch of melons. But according to this article, the doors of a delivery truck from Spain popped open and melons...

Manage Cookie Consent
To provide the best experience, we use technologies like cookies to store and/or access device information. Consenting to these technologies will allow us to process data such as browsing behavior or unique IDs on this site. Not consenting or withdrawing consent may adversely affect certain features and functions.
Manage options Manage services Manage vendors Read more about these purposes
View Preferences
{title} {title} {title}
218 Shares
Share194
Tweet11
Share
Pin13
WhatsApp