Is Switzerland the ultimate land of bread?!

When Swiss people move overseas or even just visit English speaking countries, there is one thing that almost every one of them will complain about: the bread.

To a Swiss person, Switzerland is not so much the land of cheese or chocolate, it is the land of bread. However, if you ask most any North American or British person about the bread in Switzerland, they will tell you how they miss their soft, crust-less bread from back home.

Why do these two linguistic cultures seem to bump heads when it comes to bread?

The answer to the above question lies in the crust. To build on the analogy put forth by Diccon Bewes, Swiss bread is like the personality of the Swiss: Hard on the outside.

Swiss breads are generally very crusty. Being Swiss, there is almost nothing I dislike more than going for a Cervelat or Bratwurst, getting a Büürli (traditional Swiss bun), and finding that it has a soft crust and an airy texture. I want a Büürli with a crisp crust and a dense interior!

If you love bread, Switzerland is a country for you. There are over 200 different traditional breads in Switzerland, including 22 special cantonal bread varieties. They were officially recognized in the middle of the 19th century when Switzerland officially became a democratic republic. 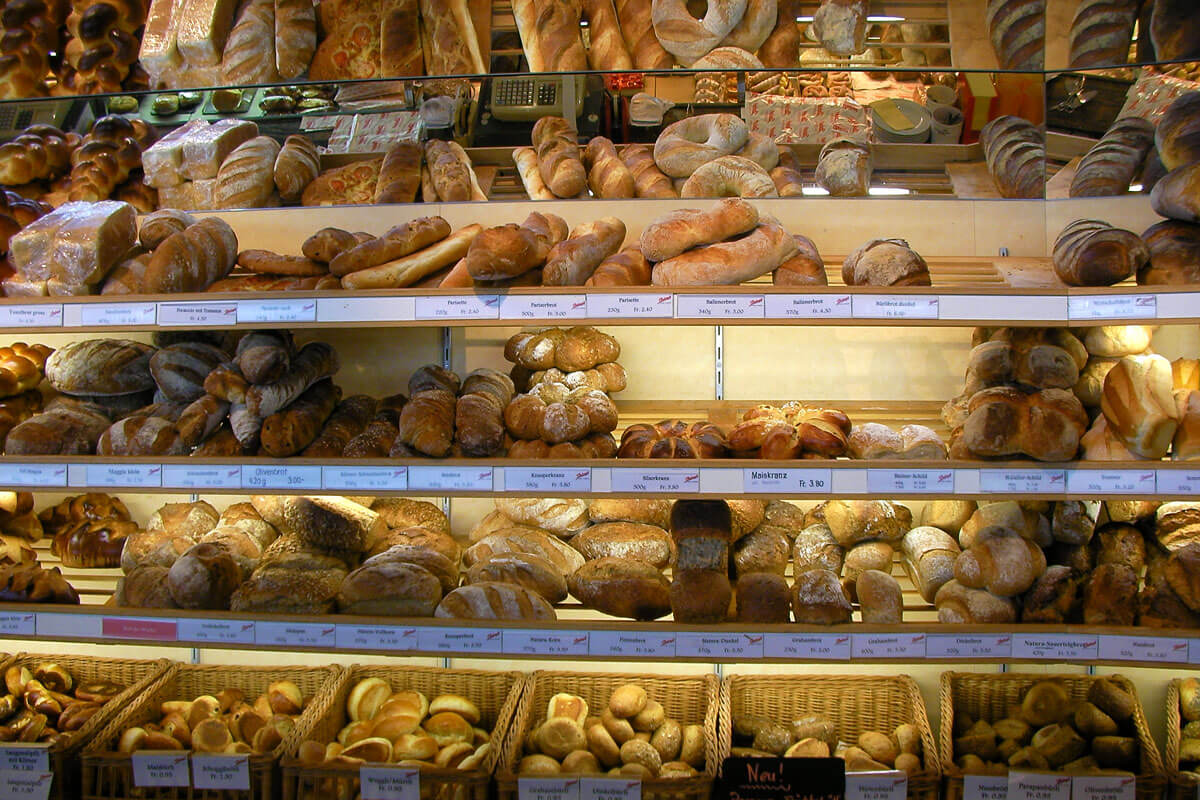 If you are looking for a new favorite bread (and no, they are not all crispy crusted breads), here is a brief overview of the cantonal breads:

For the most part, Zürich bread is run-of-the-mill.

Almost every country has a city like Zürich, where the inhabitants think that the world revolves around them. However, Zürich's influence is strong and if you are looking for the typical "Swiss white bread" anywhere in Switzerland, you will get a Zürcher Brot with its traditional three diagonal cuts on top.

I prefer the Züri-Chorn-Brot, because it is denser. This bread was created to foster the production of wheat within Zürich city limits. The wheat is stored in Niederhasli and milled in Birmensdorf. The bread is then finally produced in a traditional bakery in Glattbrugg. In order to minimize the bread's carbon footprint, it is only sold in and around the city of Zürich.

The Zopf bread is typical for Sundays.

If you want to have a traditional Swiss Sunday breakfast though, you need to serve Zopf. This braided yeast bread belongs on every family breakfast table, along with homemade jams and coffee. 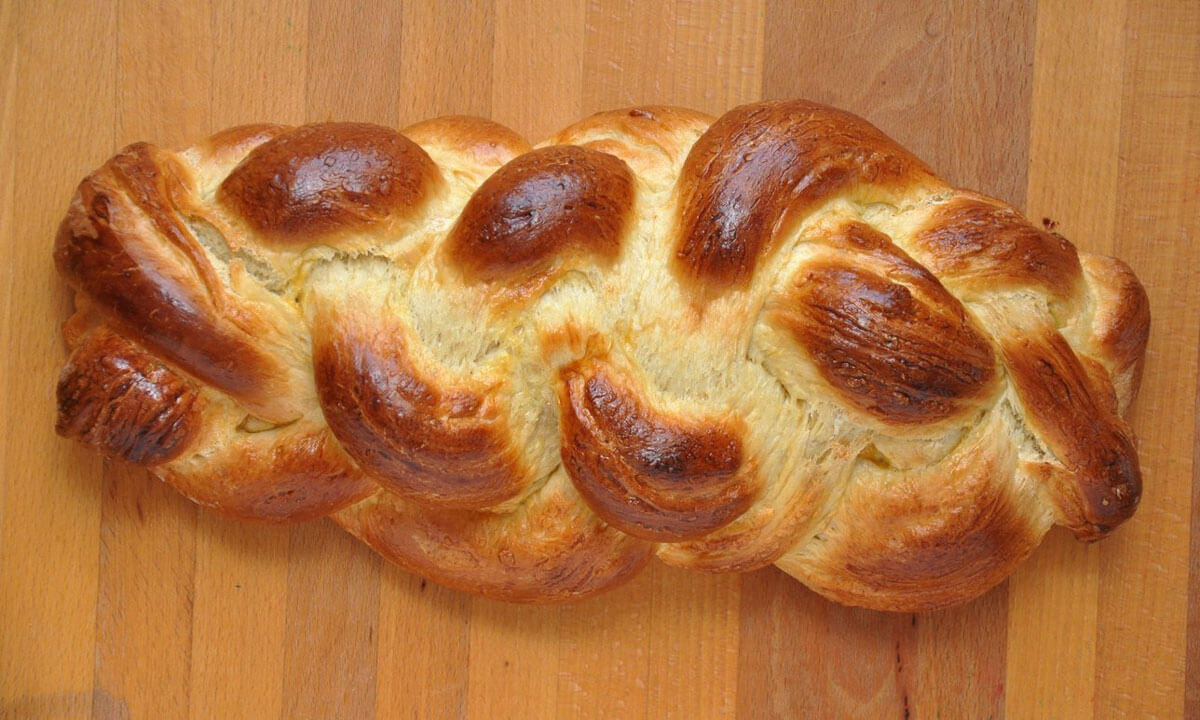 St. Galler Brot is a bread with body parts.

This bread is special for its mild taste with delicate seed notes, its crisp crust, and of course its unique shape which is quite difficult to form.

The end form has what bakers call a nose, and getting that nose requires a great deal of skill and practice. It is really a kind of bread origami, whereby you start with a round piece of dough about 3 cm thick, fold it in half, then press on to it along the flat part create about a 120 degree angle.

From there, you add a crease with the blade of your hand and fold one corner over to the opposite side. Then, fold the other corner over. Before you put the dough in the oven, you cut deep around the base of the bread so that it ends up growing a foot.

This is one of my favorites. At Migros or Coop, you will often find it as St. Galler Ruchbrot. The recipe for St. Galler Brot is included in Swiss Bread, a recipe collection featuring 42 types of Swiss breads.

If you are a real gourmand, you will certainly agree that a cheese platter is a must before dessert. Here’s a little secret — Bündner Birnenbrot. This bread filled with dried fruit (pears) and nuts is the perfect accompaniment to a cheese platter. Like the Appenzeller Biber, it also makes for a great food when you go on long hikes or runs.

And here a sweet pastry we want you to know about. The large Biberfladen are not filled, but the smaller ones, often called Appenzeller Biber, have an almond filling. The dough is similar to a traditional German Lebkuchen (gingerbread), and they generally feature unique pictures and designs molded into the topside.

Often this might be a bear, which is the animal featured on the crest and flag of both Appenzell Innerrhoden and Appenzell Ausserrhoden. Biberli make for a great snack for hikers and runners — they are better than any energy bar.

Is Switzerland the ultimate land of bread? We think yes!

With well over 200 types of bread for a country with a population less than that of New York City, and the average Swiss person consuming approximately 49 kg of bread a year, Switzerland really is a bread country!

Save 10% by using code NEWLYSWISSED

Swiss Bread by Heddi Nieuwsma goes hand in hand with other publications by Bergli Books:

*By downloading, you will automatically be signed up for the newsletter. You may opt out at any time. 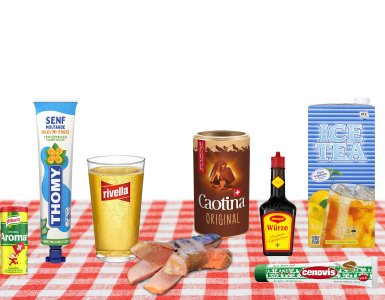 Aromat, cervelat, and cenovis: these foods are alien to 99.9% of the world. But the Swiss consume them from cradle to grave... Chasselas Class in the Lavaux Vineyards

On a bright morning high on a hill above Lake Léman, winemaker Bernard Monnier has one eye on the sky and another on the glass of Chasselas in his hand...

Bill’s Guide to the Food Truck Fête in Lausanne

On Thursday, Lausanne hosted savory-smelling food trucks. You did not need a passport to sample Argentine empanadas, Japanese gyoza...

Manage Cookie Consent
To provide the best experience, we use technologies like cookies to store and/or access device information. Consenting to these technologies will allow us to process data such as browsing behavior or unique IDs on this site. Not consenting or withdrawing consent may adversely affect certain features and functions.
Manage options Manage services Manage vendors Read more about these purposes
View Preferences
{title} {title} {title}
2K Shares
Share2K
Tweet24
Share1
Pin84
WhatsApp