The Swiss Pavilion was our highlight at Expo Milano 2015 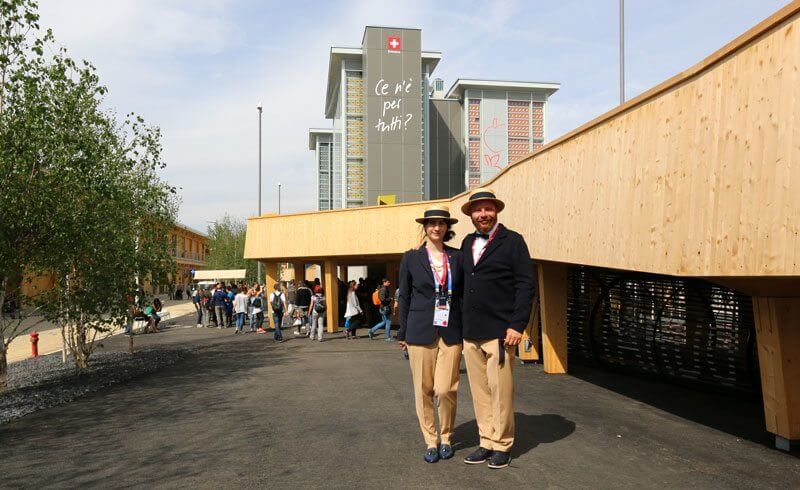 The world is coming together in Milan this year.

At Expo Milano 2015, the official world fair, more than 140 countries are showcasing what they have in store. The main theme is "Feeding the Planet – Energy for Life", and each nation is presenting their unique way of dealing with nutrition and sustainability.

Take the Israel pavilion, which highlights how vertical farming works. During our recent weekend stay at the Expo, we learn that this technology actually makes plants stronger, presenting a real solution for countries with a small agricultural footprint. Japan mesmerizes us with a futuristic restaurant serving virtual ramen noodles, Morocco with a walk through their various vegetations, and Brazil with a giant overhead net inviting us to observe the fauna and flora below. Other nations have flat out ignored the Expo's theme, bluntly showcasing their glitzy tourism videos instead.

Switzerland, to the rescue! The NEAT tunnel through the Gotthard massif is slated to be opened in June 2016. This exhibit teaches us that the drilling was accurate down to mere milimeters: Another favorite is a replica of the Swiss Alps made of granite from San Gottardo. We spend at least 30 minutes viewing the mountain range from all angles: And last but not least: Confooderatio Helvetica

Naturally, we are interested in finding out how Switzerland presents itself abroad. As the first country to join the Expo 2015 initiative, Switzerland's project goes by "Confooderatio Helvetica". Imagine a pavilion made up of four towers, each filled with a finite amount of Swiss delicacies: dried apple rings, crystal clear (local) water, salt cubes and servings of instant coffee. We are among many other visitors who want to explore the Swiss Pavilion and learn about Switzerland's diversity. As we walk from one tower to another, we are invited by staff members to help ourselves to as much of the staples as we would like.

I feel fortunate to have plenty of everything back home, so I resist the urge to fill my bag. Others, not so much: We watch several people stuff apple rings into their pockets, and we later encounter two kids licking (!) the salt out of their bare hands... According to the organizers of the Swiss Pavillion, the gradual emptying of the towers is supposed to encourage people to consider their own attitudes on food consumption and nutrition. Should the towers run dry, they would likely remain empty for a while. "Emptiness conveys meaning, too. Namely that others have already taken everything," says Swiss Ambassador Nicolas Bideau.

We agree: Solidarity is a virtue and an important value in the Swiss psyche. Why you should visit Expo Milano

For once, we are making an exception by including an event which takes place in bordering Italy. We think that Expo Milano 2015 is a very unique festival which should not be missed. It could technically be visited in one day, but we recommend two or three. Why not spend some extra time in Milan or in nearby Ticino?

Regardless of the length of your stay at Expo Milano, do take the train. You can easily get there from all major Swiss cities, with fares starting at only 22 francs. Of course, this includes lots of leg room and wonderful vistas in the latest wagons SBB has to offer.

Remember, if you miss this world exhibition, you might have to travel as far as Kazakhstan in 2017 or the United Arab Emirates in 2020! Before 2011 is completely taking over, I believe that the prior year deserves another minute. Much has happened in the Swiss political landscape, but these photographs prove that 2010 boasts some scientific... Manage Cookie Consent
To provide the best experience, we use technologies like cookies to store and/or access device information. Consenting to these technologies will allow us to process data such as browsing behavior or unique IDs on this site. Not consenting or withdrawing consent may adversely affect certain features and functions.
Manage options Manage services Manage vendors Read more about these purposes
View Preferences
{title} {title} {title}
47 Shares
Share44
Tweet3
Share
Pin
WhatsApp