Dear readers, you don't need to travel far to see the world. It's all right here in Switzerland!

Inspired by this and this round-up of exotic Swiss destinations, I asked my international group of authors: "Where does Switzerland not look like Switzerland?"

Boy, did they share good some good ideas! From India to Hawaii, they have spotted glimpses of their home countries in Switzerland. A small idea turned into an epic post with locations from around the world that you can visit in a day. No need to change currencies or bring a passport, either!

Here are some exotic and unique spots in Switzerland which make you feel as if you've traveled abroad:

The Maldives at Lake Neuchâtel

Estavayer-le-Lac is located on the eastern shores of Lake Neuchâtel. It is a veritable paradise for those into water sports. Be it SUPing, surfing, or water skiing, it's all there.

Those who miss laid-back beach vibes will love Estavayer-le-Lac: there are a number of sandy beaches with everything you would expect in the Maldives - and more! Have you ever tried a water ski lift? Rent a wakeboard or water skies at Alphavoile or Alphasurf, and off you go!

More exotic vibes can be found at Switzerland's lowest altitude, the Brissago Islands. Thanks to the warm climate, some 1700 plant species thrive on the islands. From cacti to bamboo and palm trees, you will surely feel those tropical vibes on Lake Maggiore!

The authentic Thai Pavilion in Lausanne

In which other parks in Switzerland can you see 100'000 gold leaves all at once? The Pavillon thaï of Lausanne is truly a sight to be seen. The building is a gift from King Bhumipol Adulyadej of Thailand who lived in Lausanne from 1933 to 1951.

There are at least two other Buddhist temples in Switzerland. Gretzenbach near Olten is home to Switzerland's largest Buddhist temple, Wat Srinagarindravararam. And there is Wat Buddhavihara in Échallens, Vaud. Both are important centers for the local Thai, Khmer, Lao, and Swiss Buddhist communities.

A Japanese zen garden in Geneva

At the Geneva Botanical Garden, there is a section with a torii gate at the entrance. Behind, you will find a zen rock garden symbolizing the ocean and islands. Depending on the season, you can enjoy the flora that is so typical for Japan: cherry blossoms in the spring and maple foliage in the autumn. 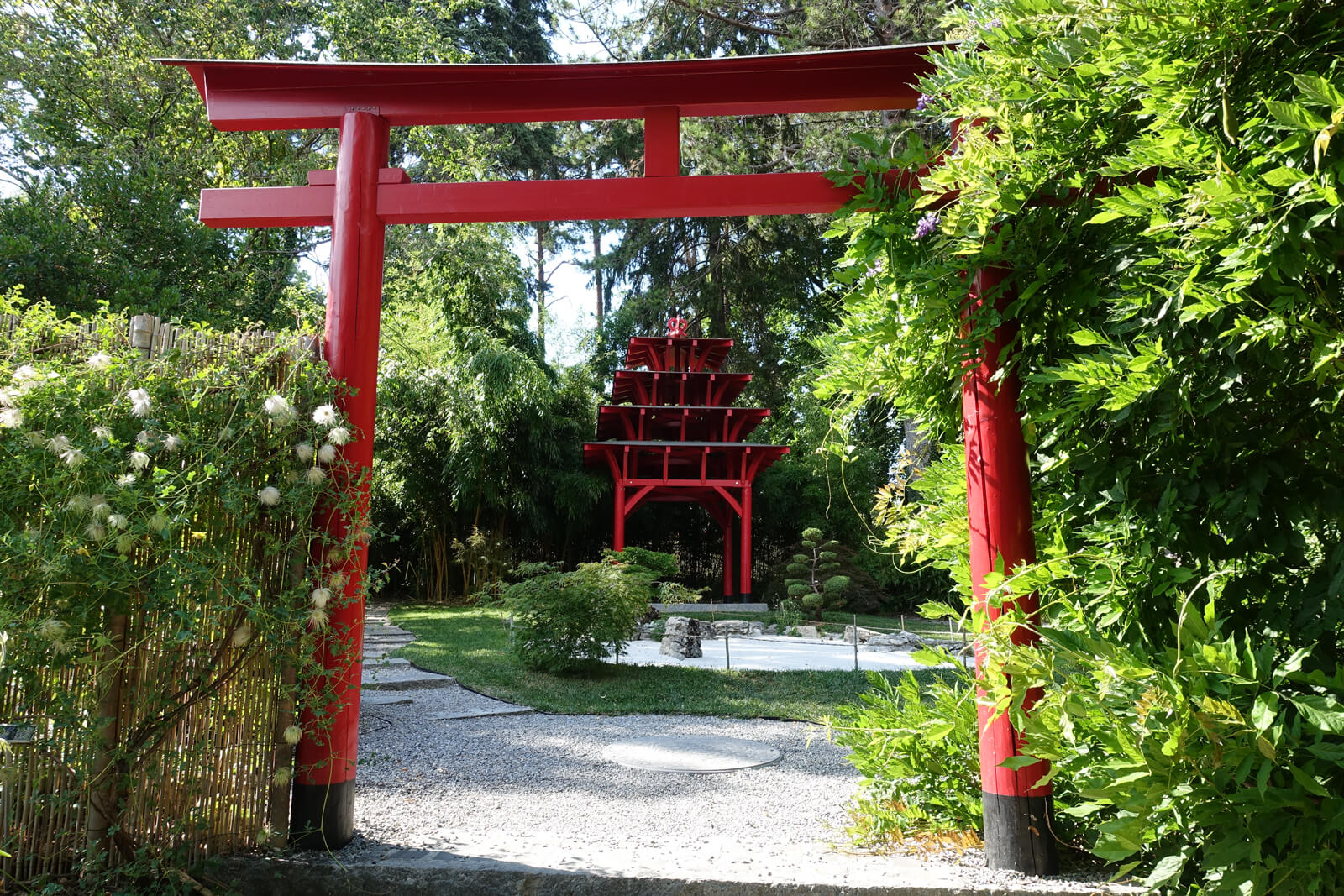 Japan in Switzerland – Guide to culture, food, and shopping

Who knew there's a zen garden in Aigle? Apart from manicured plant and flower gardens, Le Jardin Zen has a sound path with beautiful Asian drums and bells. From Burma to Korea and Shanghai, here is an excursion to Asia that satisfy all your senses.

To complete your trip, why not book a night at the Crazy Lounge BnB with its Asian rooms? Choose among eclectic rooms named "Maharajah" or "Shanghai Dreams", or move into the Imperial Yurt with its own jacuzzi...

An escape to the vastness of Mongolia

Google "pictures of Mongolia" or "Glen Coe in Scotland" and it will return vast landscapes of sloping yellow mountains. Sure, our Mamiko did not run into any horses when she looked out over the Albula Pass in Switzerland. But the sheer grandeur reminded us of somewhere in the world...

To level up your Mongolian experience in Switzerland, consider staying in a traditional yurt tent on Alp Flix. Heated with a wood-burning stove and lacking electricity, this could be just the right escape for the city dwellers among you.

Truly stunning: the most unique hotels in Switzerland!

The Creux du Van is the Grand Canyon of Switzerland

The Jura mountain range bordering France has been shaped by millions of years of erosion. One of the must-see spectacles is the Creux du Van, an amphitheater of massive proportions. Standing atop the 160-meter drop quite literally feels awesome. And the experience reminded me of looking over the Grand Canyon from the south rim.

The Rocky Mountains at Grisons

Switzerland's largest canton has several valleys that resemble the Rocky Mountains of North America. For one, there is Val Mora, a power spot bordering the Swiss National Park.

Another scenic valley is Val da Camp with its larch trees, streams, and emerald blue lakes. The best way to enjoy the wilderness is by doing a round-trip hike on a weekday when there are fewer people. Between June and October, take the PostBus from Pontresina to Sfazù. From there, an idyllic five-hour hike will allow you to soak in that Rocky Mountain feeling - no need to bring a passport, either.

The Horseshoe Bend of the River Rhine

In Page, Arizona, one of the highlights is Horseshoe Bend where the Colorado River meanders through a deep canyon. Move 9205 km east and you will end up in the Ruinaulta in Grisons.

Ruinaulta is an impressive canyon created by the River Rhine. It is located between Illanz and Reichenau in the canton Grisons. (You may have passed through it by train without noticing the river's bend.) For a bird's eye perspective, use the car park at Trin Mulin, which is about 4 km from the viewpoint.

Christ the Redeemer of Rio de Janeiro in Bad Ragaz

Believe it or not, you can visit Rio de Janeiro's iconic landmark without crossing the Atlantic. On the cliffs above Bad Ragaz, there is a replica of Cristo Redentor! While the original is 38 meters, the Swiss version stands 11 meters tall. Access of the statue is by way of Schloss Wartenstein, a highly recommendable restaurant.

Views from the Duomo of Florence in Solothurn

Look up a picture of the Cathedral of Santa Maria del Fiore on Google and you will notice a resemblance with Solothurn's cathedral. While the town by the River Aare is nothing like the capital of Tuscany, the views from atop the tower of the St. Ursus Cathedral in Solothurn are!

The Russian Orthodox Church of Geneva sits high above the city in the quiet Les Tranchées neighborhood. Its golden onion domes can be seen from far away and make this a piece of architecture worth visiting.

Constructed more than 150 years ago in the Byzantine Moscovite style, the church still serves as a place of worship for Geneva's Russian Orthodox community. In Vevey, there is a second Russian Orthodox Church.

Could the Lost City possibly be located in the remote Val Bavona? The views into the lush valley from the top of the Foroglio waterfall conjured up imaginations of what the Andes mountains might be like... Or could this be Mutatazi Falls in Zimbabwe?

New Zealand is at Lake Klöntal

Our Melanie has lived in New Zealand extensively and she swears: Lake Klöntal is the Milford Sound of Switzerland! (Just Google it to see why.)

India's Dharamshala is high above Vevey

The center is home to an authentic Tibetan Buddhist monastery, as well as an international school. It is open to the curious among us who want to learn more about Buddhism, have a meal at the monastery, or spend some peaceful time. Our Rajan brought it up because this site reminds him of Dharamshala in India.

While the original Haʻikū Stairs in Oahu are currently closed for hikers, our Rex suggests its twin hike on Mt. Pilatus as a suitable remedy. Our advice: try to stay overnight and get up in time for the sunrise above Lake Lucerne. You will truly understand why Heaven is on Mt. Pilatus...

Have we missed any locations with a foreign touch in Switzerland? Please let us know in the comments below! A secret no more: Park Hotel Brenscino in Brissago

Brissago brings back memories of the subtropical islands with their lush vegetation. Their extension on land is called Park Hotel Brenscino. Some tips to get the most out of Bellinzona in Ticino 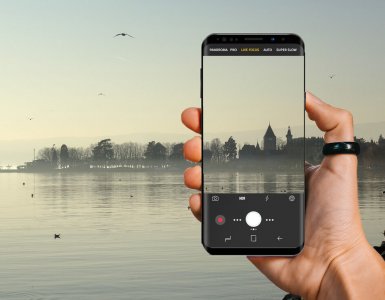 These power spots in Switzerland allow you to recharge

Manage Cookie Consent
To provide the best experience, we use technologies like cookies to store and/or access device information. Consenting to these technologies will allow us to process data such as browsing behavior or unique IDs on this site. Not consenting or withdrawing consent may adversely affect certain features and functions.
Manage options Manage services Manage vendors Read more about these purposes
View Preferences
{title} {title} {title}
8K Shares
Share7K
Tweet1
Share
Pin610
WhatsApp