The city of Zürich occupies just 87.88 km² with a circumference of approximately 42 km. And yet, the city has 118.7 km of tram lines that most residents will never travel in their entirety. (It is equivalent to less than the distance from Zürich to Bern.)

While most Zürchers know the tram line outside their home and the popular ones around the city center, few will venture on the #9 to Hirzenbach, the #2 to Farbhof or the #3 to Albisrieden. Recently, I hopped on the #3 heading towards Albisrieden.

I got off at Fellenbergstrasse, the second last stop in a very residential area of Zurich on the foot of the Uetliberg. Albisrieden used to be a municipality until it was incorporated into the city of Zurich in 1934. Despite there not being a noticeable border between the rest of the city and this neighborhood, it has very much a small-town feeling. During autumn, they even have a cow parade as the farmers bring the animals back from the pastures. 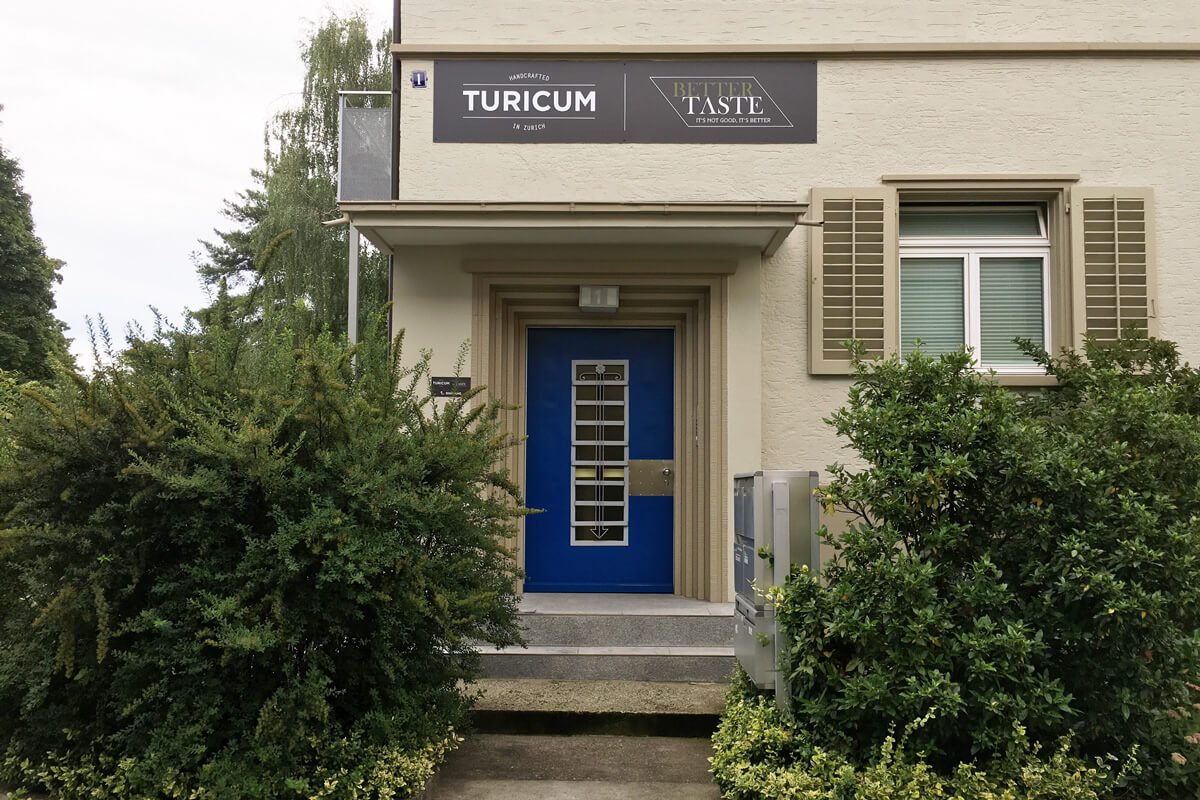 Albisrieden is a quiet neighborhood with a secret

My reason for taking the tram out here was not to visit a farm or to investigate lesser known hoods of Zürich. It was to make gin. Switzerland, like much of the world, is caught in a gin craze. Hipster nonsense, you think? I beg to differ.

Getting off the tram, I walk along a residential street, turn a corner and go another hundred or so meters until I see what looks like a blend of office buildings and apartments. On the outside of the building, I read: “Turicum: Handcrafted in Zurich” and “Better Taste. It’s not good, it’s better.” 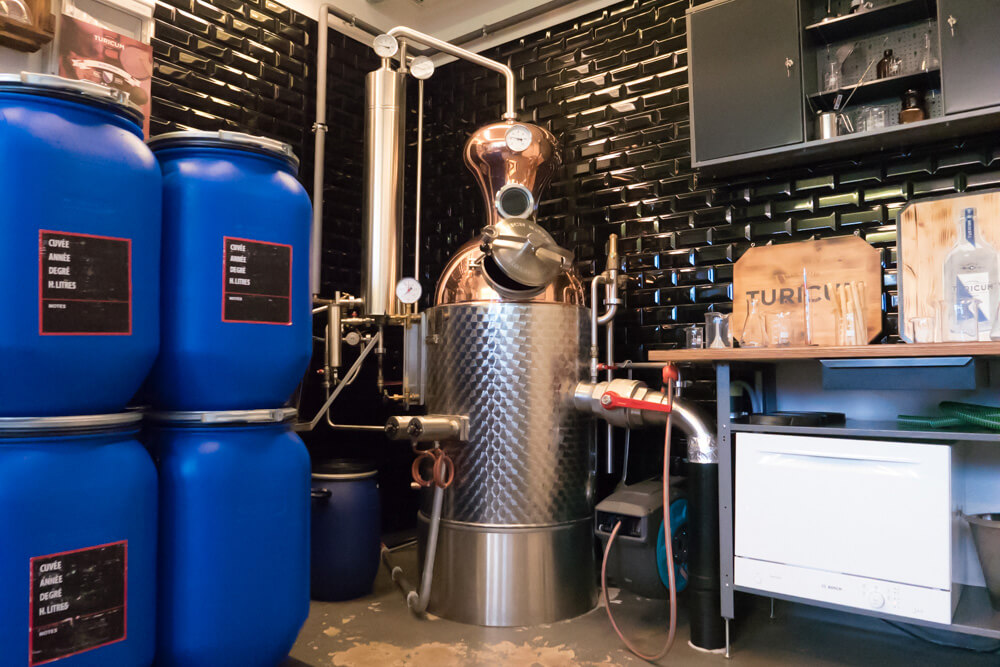 I am at the Turicum Gin Lab. The team behind the Zurich Gin are launching their gin lab in order to bring gin lovers in closer contact with this botanical spirit. As I enter the unsuspecting distillery, I am greeted by the host, Xaver, and offered a gin and tonic or a negroni. The aperitif sounds like just the right thing despite it being over 30 degrees C outside – and only 2 PM. But it is Saturday, and I need to understand the product I will potentially be creating. 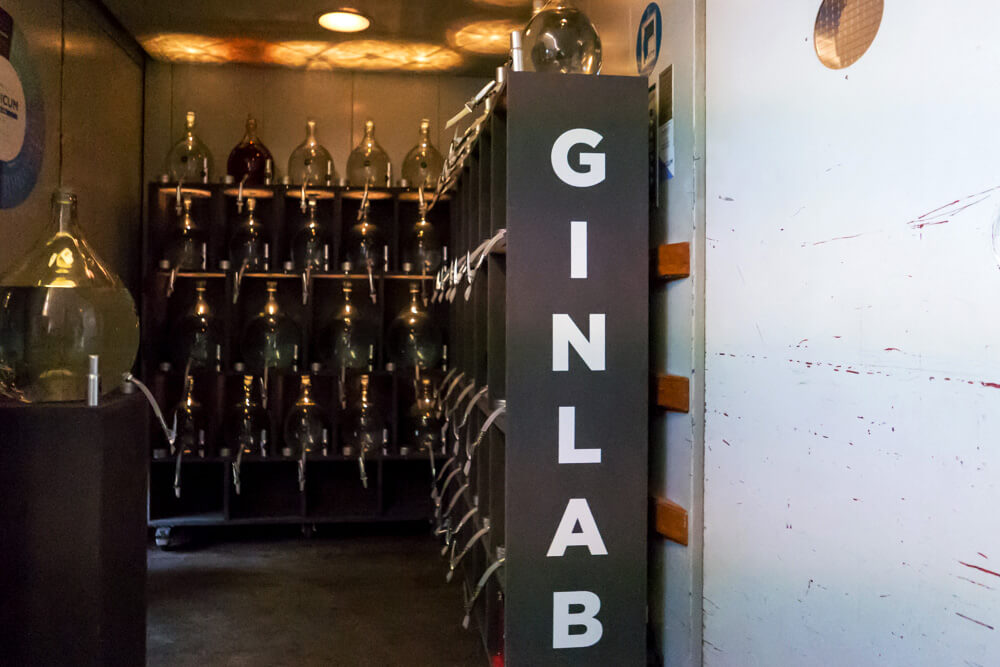 Gin has been the spirit of choice since 1618

We are a group of seven. Most of us have been into gin for about four or five years, dating back to gin’s new renaissance. While many believe that gin is just another hipster trend, our host tells us about the history of gin, a Dutch concoction of alcohol, herbs and most importantly, juniper berries.

After the 30-Years-War (1618 to 1648), the British took a liking to the drink. Because creating the drink can be done in small batches without requiring lots of space, and because William of Orange had exempted all juniper products from taxes, gin was the drink of the day – much to the dismay of beer brewers. Throughout the 20th century, large beverage players took over the market to the point where 20 years ago, gin became synonymous with Gordon’s, Bombay Sapphire and Tanqueray. However, like the craft beer movement, the craft gin movement has brought in a flood of new gins.

Each producer has chosen a style with their own botanicals and methods of creating the gin. As long as they use juniper, they have a gin. What becomes interesting is the use of local plants and flowers. Turicum Gin uses linden flowers, which were initially sourced from the iconic Lindenhof that overlooks the Limmat in Zürich.

Along with the crash course in gin history, we are told that we are not here to create Turicum gin. Instead, we will be creating our very own gin. A personalized gin that is specially blended to meet our taste. “That’s great,” I initially thought. “We’re going to make one batch of gin that is a line of best fit for all seven of us.” I was wrong.

If you have ever seen the Heineken commercial where a woman takes her friends to her shoe closet, which is essentially an entire room, and the man takes his friends to his beer fridge, which is the same size as the shoe closet, you can imagine what happened next. Our host opens the doors to an industrial elevator, and the walls are aligned with over forty different infused spirits.

We are blending our gins. There is, of course, a huge balloon full of juniper, as this should make up about 30 percent of our gins. Then, there are smaller jugs with lemon, orange, linden, ginger, vanilla, mesquite, rose, lavender, cucumber and strawberry infused spirits. Precision blending instruments to create our own gin

The instructions and equipment are nicely presented and laid out for us at designated work stations. We have beakers and glass stir rods. Before we are unleashed into the room to pour and mix different spirits, we learn the fundamentals of gin and taste some of the herbs, spices and botanicals involved. It turns out that a good gin has more than juniper berries and a few botanicals in it.

You need to create a base which ought to blend the juniper, add a citrus note and around eleven floral and herbal notes. Then you decide in which direction you want to take your gin – strong on the juniper like the Swedish Hernö gin, or gentle on the juniper and fresh with cucumber like the now famous Hendricks. My gin is a reminder of summer

I decide that I want to go for a flavor that should remind the drinker of the summer classic: Pimm’s. My secondary characteristics are heavily based on cucumber, strawberry, mint and a few other herbs for some kick.

Getting the proportions just right is difficult. Though in the end I was able to create a gin that tastes respectable, I would not brag about my recipe. In some respects, what the Gin Lab does is building a new respect for the production of gin. That’s apart from letting you experiment with the different flavors, while in some ways deconstructing a gin. For instance, we learn that the guys behind Turicum gin experimented for months on a small stove-top pot before they even got the flavors they wanted. Despite the numerous “Zürcher” gins, Turicum Gin is the only gin distilled in the city of Zürich.

The small still in the corner of the distillery shows how small the production is despite the gin being available in many of the best bars across Switzerland, and now into Germany and Austria. And while I would not say that gin is a hipster drink, I would say that it took the hipster movement to make spending countless hours hand labeling bottles of small batch gin something that commands respect – and not something shunned for its inefficiencies.

If you are a gin fan or simply curious about the world of gin, I can highly recommend signing up for the Turicum Gin Lab and creating your own unique bottle (180 francs per person for a three hour class). Best of all, you get to take your personalized bottle home along with two cups and your own jigger, so you too can mix that perfect negroni at your next apéro… We live in times of nostalgia. This is why we support Stadtmilch, a project to bring creamy farm milk back to Zürich... 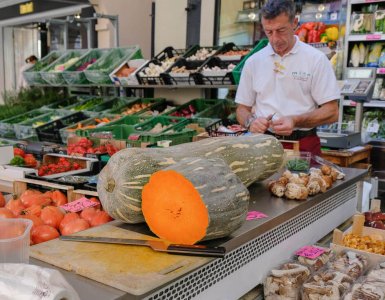 5 typical “grotto” restaurants not to miss in Ticino

Manage Cookie Consent
To provide the best experience, we use technologies like cookies to store and/or access device information. Consenting to these technologies will allow us to process data such as browsing behavior or unique IDs on this site. Not consenting or withdrawing consent may adversely affect certain features and functions.
Manage options Manage services Manage vendors Read more about these purposes
View Preferences
{title} {title} {title}
168 Shares
Share159
Tweet
Share5
Pin4
WhatsApp