For many Swiss, carnival season is a time to load up on calories.

That’s because the most irresistible, wholesome fried foods take over the shops. While some of these delicacies are available throughout Switzerland, many are local to certain towns or regions.

The night before Lent came to be known as Fasnacht - the night before fasting. Since edibles from meat to cheese, butter, and eggs were prohibited after Ash Wednesday, Fasnacht was the last opportunity to turn them into high-calorie delicacies.

Here are some of the main Swiss carnival foods explained:

Battered, fried, and sprinkled with cinnamon, dry gingerbread gets a second life. A traditional recipe calls for beer, but it can be substituted with milk and cream. Bacheschnitte are mainly served in the Appenzell cantons throughout the year, but their origin lies in Herisau where they were traditionally served during Funkensonntag.

These delicious fritters, dusted with powdered sugar, are made of sweet dough. They can be purchased in most larger shops in Switzerland.

In German speaking parts of Switzerland, it is also called Fasnachtskiechli (Basel), Chilbiblätz (Bern), Hondsfläde (Appenzell), Öhrli or Chneublätz (Lucerne). In the Romandie, they are called merveilles. And in Ticino, they are called frittelle di carnevale.

The name of this 16th-century fried pastry comes from its shape. Bunny ears contain Kirsch liquor and zest of lemon and orange. They are best with some cinnamon.

A favorite shortcrust pastry across Switzerland, the “secret sauce” in Schenkeli is lemon zest and Kirsch. Depending on the bakery, they come in shades of brown, as well as in varying sizes. For the best taste, Schenkeli should be consumed fresh...

These heaps of fried dough usually contain some Kirsch liquor. It is popular to dip them into chocolate sauce or fruit jam.

This fried pastry is filled with a type of sweetened whey cheese called Ziger. It is consumed throughout the year and is most popular in central Switzerland. However, Fasnacht is the time of year when they are devoured... Here’s an easy-to-follow recipe by Helvetic Kitchen.

These Swiss towns have carnival food traditions of their own:

During the cold early morning hours of Morgestraich, the Basler Mehlsuppe is the preferred way to warm up. This flour soup used to be a staple breakfast for the poor.

Dating back to the 18th century, the Lozärner Chögelipastete pie is filled with ingredients such as minced meat on a mushroom sauce and raisins. It is served with sides of carrots, pies, rice, noodles or French fries.

The typical Schwyzer Krapfen are fried pockets filled with pear puree. Very close to an empanada, they were easy to consume in times when cutlery was a luxury. The locals call them Kösikrapfen.

Did I whet your appetite for more Swiss winter foods? 😋 Apart from cheese and chocolate, Switzerland boasts a delicious line-up of Swiss soda beverages. From Passaia to Rivella, here are seven to try... 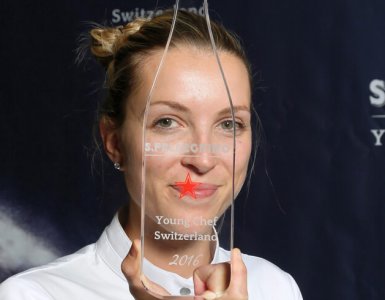 S.Pellegrino is holding an international cooking competition for aspiring chefs: Young Chef 2016. Wait until you see the deciding dish by Swiss contender...

Manage Cookie Consent
To provide the best experience, we use technologies like cookies to store and/or access device information. Consenting to these technologies will allow us to process data such as browsing behavior or unique IDs on this site. Not consenting or withdrawing consent may adversely affect certain features and functions.
Manage options Manage services Manage vendors Read more about these purposes
View Preferences
{title} {title} {title}
1K Shares
Share1K
Tweet3
Share
Pin11
WhatsApp