In this land of dairy, does it surprise you that many Swiss winter foods contain cheese?

The unforgiving nature of the Alps has defined life in Switzerland for centuries. Early residents of the Helvetic Republic were in awe of nature and her occasional fits: avalanches, floodings, or rock slides. But in between when conditions were right, they managed to cultivate crops and practice alpine farming.

During winter, the lives of farmers would move indoors for good. With no opportunity to harvest, it was essential for Swiss farmers to have solid food storage. Hard cheese is the natural product that came out of this necessity. Much of a summer’s milk would be converted into yellow loaves of cheese that could be stored through the rough winter months.

As a consequence, many alpine-inspired recipes contain melt-in-your-mouth cheese, from raclette to Älpler Magronen, and from Rösti to cheese fondue.

The most popular Swiss winter foods have one thing in common: they are shared experiences. Be it a convivial cheese fondue party or a raclette dinner among friends, these dishes bring people together in a warm and cozy atmosphere.

Also: a smelly atmosphere. That’s because cheese fondue and raclette leave behind an unmistakable odor… Due to these cheesy fragrances lingering in the host’s apartment the day after, many Swiss don’t mind being invited out.

It is easy to fathom that cheese fondue was born out of sheer Swiss ingenuity. You may have heard the legend that farmers decided to dip dry bread into melted cheese during times of hardship, inventing cheese fondue in the process.

But in reality, cheese fondue was only coined an official Swiss national dish in 1930. Before that, only dairy farmers had even heard about it since milk was used in fondue rather than wine. With the goal of curbing cheese sales, including exports, the Swiss Cheese Union (Schweizerische Käseunion) launched a marketing campaign. These efforts culminated in the presentation of cheese fondue at the New York World's Fair in 1940.

Regional varieties of cheese fondue were invented, such as fondue moité-moité or Emmentaler Gruyère fondue. And fondue was promoted to restaurants in a dedicated 1938 cookbook: Neue Käserezepte für das Gastgewerbe.

Fondue is served in a pot called a caquelon which sits on a heater called rechaud. The result of all this is a shared Swiss winter food ritual unlike any other.

Bread, wine, and cheese: is it a coincidence that the Swiss National Dish combines three iconic Switzerland foods? As a rule of thumb, an ideal serving size is 200 to 250 grams of cheese per person. Today, each Swiss consumes about 1.3 kg of melted cheese every year, which includes raclette. (Source: Statista)

Fondue chinoise is one of the most popular winter foods in Switzerland. And there are good reasons for this! Since the broth, raw meat, dips, and sauces can be prepared ahead of time, hosts get to enjoy the party. Hence, it is popular for Christmas dinners or on New Year’s Eve.

Think about it: each person gets to pick their own meats, and nobody tells them which sauces to use! It’s liberty at its finest and likely a reason why fondue chinoise is a popular Swiss Christmas dinner meal.

You have to give it to the Swiss for being ingenious about all the ways to melt and consume cheese. While melting cheese over an open fire already was a thing in the 13th century, alpine peasants back then would drip the cheese onto the bread. Today’s version of raclette pairs melted cheese with potatoes instead.

Just like there are hundreds of types of cheese, raclette comes in all kinds of flavors. At its most basic, raclette cheese varies from mild to salty. The classic raclette cheese is Walliser Raclette AOC with 28% fat. Generally speaking, the higher the fat content of cheese, the easier it will melt.

To spice things up, raclette nowadays comes with added flavors and spices, such as smoked cheese, chili, and even wasabi. The ideal amount of cheese per serving is 200 to 250 grams. An equal amount of bread is served, which comes out to three or four slices per person.

Swiss winter Foods BASED ON HISTORY AND TRADITION

Some of Switzerland’s rich traditions date back centuries. From celebrations originally rooted in pagan beliefs to religious days, many events come with particular foods. It often surprises me to see that such dishes have been passed on from generation to generation.

Every January, Three Kings Day is an important first milestone for many Swiss families. It is traditionally commemorated on January 6, which is Epiphany. One of the highlights of this day is the traditional Three Kings Cake (Dreikönigskuchen). This sweet bread is made of a centerpiece surrounded by six or more buns.

Even before they head to school, Swiss kids will eagerly take a bite out of the Three Kings Cake. Older kids might grab a cake on the way to work, and some are lucky enough to share one with coworkers during the morning break.

In any case, whoever picks the one bun with a miniature-sized king will be king or queen for the day. Cakes purchased at a bakery include a cardboard crown, allowing the king or queen to really rub it in...

In Basel, the annual return of carnival season is a serious matter. Not only are marching bands practicing, and tailors are crafting costumes. Basel area bakeries are equally busy producing the Basler Fastenwähe.

A historical anecdote from the 17th century stipulates that Basler Fastenwähe should only be baked between Three Kings Day and the beginning of carnival. This Sunday delicacy can be described as a sort of flatbread made of yeast dough. It has a buttery taste, almost like Zopf bread, and is commonly sprinkled with cumin seeds.

Grittibänz recipe for the Swiss bread man or bread woman

One important such event in Switzerland is the annual carnival. The night before Lent used to be the last chance to process meat, dairy, and eggs into food. The resulting dishes were often loaded with calories, and most always fried in lard.

And last but not least, the Swiss have an obsession with roasted chestnuts. Back in time, this sweet variety of chestnut used to be the literal bread of the poor. People in Ticino would grind them into flour to make bread. But today, they are hawked in Swiss towns and cities as soon as the temperatures start to drop.

In Switzerland, there’s a Christmas cookie for every taste. During the holidays, you will find cookies being baked in home kitchens, often based on grandmother’s notes. Local bakeries often use secret recipes to produce their cookie specialties. And big family-run factories still source local ingredients to ensure a high-quality biscuit.

According to Andie Pilot, an authority on Swiss Christmas cookies, these little heaps of deliciousness show off the best of Switzerland because they involve:

Save 10% by using code NEWLYSWISSED

Swiss Bread by Heddi Nieuwsma goes hand in hand with other publications by Bergli Books: 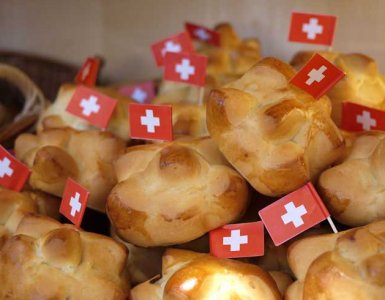 The idea of going on a shopping spree to find unmissable foods for the Swiss National Day festivities started with an Instagram post... Feeling all Danish at Café Good in Rapperswil

Are you familiar with the Danish word hygge? It has many meanings and it is no easy task to translate it. At Café Good in Rapperswil... 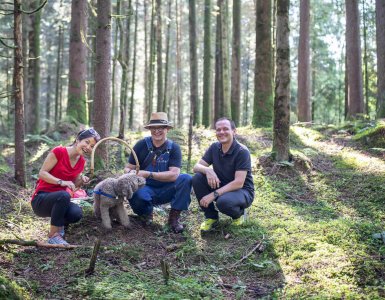 Deep in the Entlebuch, Chef Stefan Wiesner (a.k.a. The Wizard) has invited us into his mystical world of art, alchemy, botany and culinary skills...

Manage Cookie Consent
To provide the best experience, we use technologies like cookies to store and/or access device information. Consenting to these technologies will allow us to process data such as browsing behavior or unique IDs on this site. Not consenting or withdrawing consent may adversely affect certain features and functions.
Manage options Manage services Manage vendors Read more about these purposes
View Preferences
{title} {title} {title}
46 Shares
Share
Tweet21
Share
Pin25
WhatsApp