Our guide to must-see museums in Lausanne Anyone looking to lose themselves in museums for a few days should go to Lausanne.

The city is an example of truly spectacular curatorship and features both world-famous institutions and well-kept secrets. I have recently spent a weekend in the town by Lake Geneva, and here is my guide on must-see museums in Lausanne:

No trip to Lausanne is complete without a visit to the Olympic Museum. After all, the city is the Olympic capital, and references to the games and to the spirit of Olympism can be found everywhere you look. The 2020 Youth Olympic games will even be hosted here, as a large countdown timer by the lake proudly proclaims.

The Olympic Museum itself is much more than a collection of artifacts; it is a pilgrimage site, a cathedral to Sportsmanship, and the Olympic ideals of combining sport with culture, education, and international cooperation. 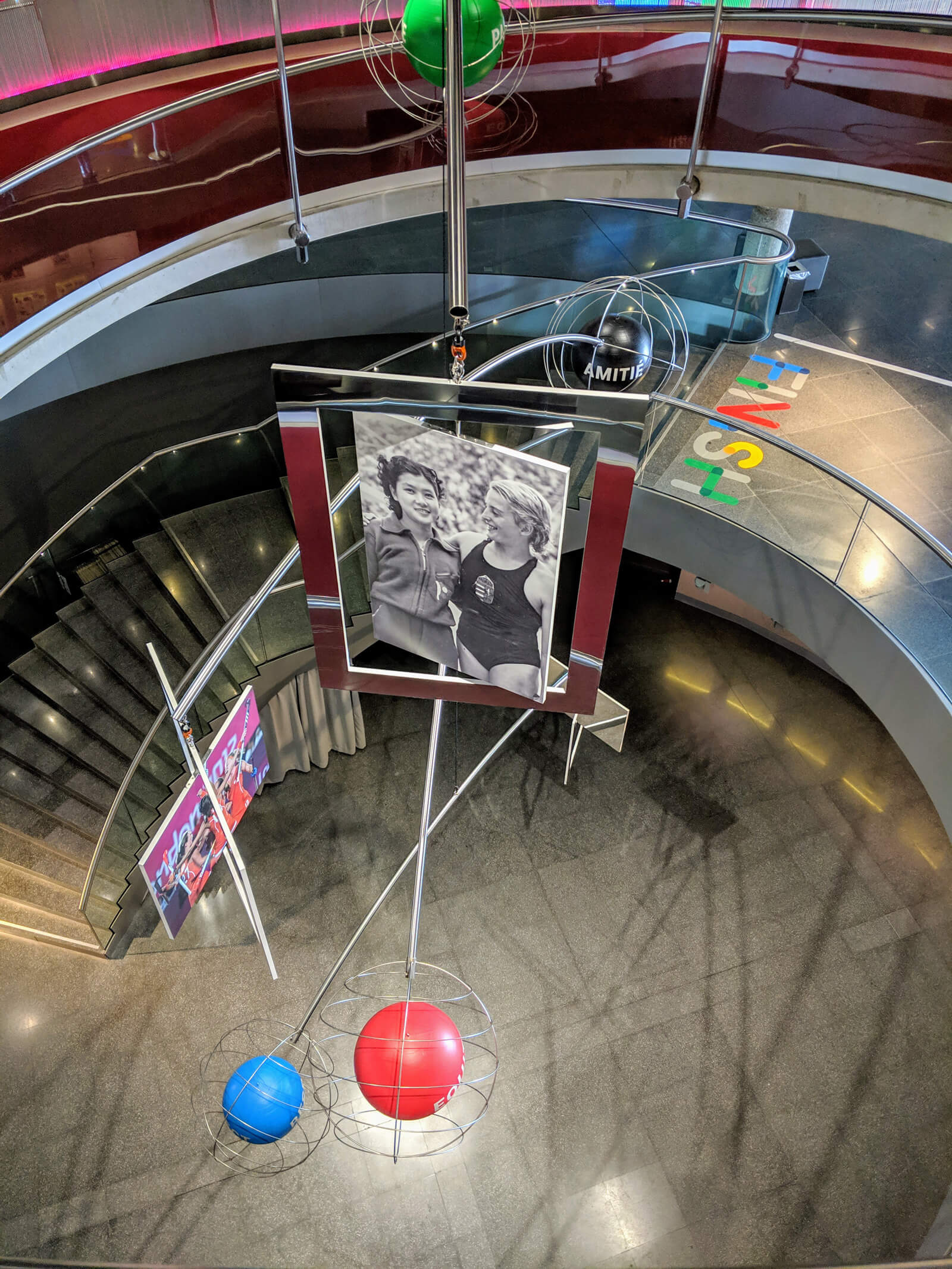 The space is very modern, featuring interactive multimedia exhibits taking visitors through the history of the ancient Olympics. These exhibits highlight the games 19th century revival by Pierre de Coubertin, and many of the individual elements of the modern games: the torch, the opening ceremony, and the Olympic Village.

The Olympic Museum is genuinely impressive. It manages to convey the spirit and ideals of Olympism, rather than just the history of the games, and it does it in a way that people of all ages can enjoy.

The special exhibit, We are Olympians, and you?, looked at some of the darker sides of being an athlete on the world stage, in a very real and genuine way. It was sobering to hear Michael Phelps talk about his battle with depression or watch the testimonies of athletes struggling to come back after doping or cheating scandals. The exhibit portrayed them as real people with real problems and let them tell their stories. But this was not the only emotional part of the museum. Several of the video installations also left watchers wiping away tears at the incredible endurance of the athletes, and the power of the human spirit. Anyone interested in design will enjoy the museum as well, as it shows the progression of graphic design through the past century with the Olympic posters and paraphernalia. After the museum, be sure to walk down to the lake through the sculpture park, which was in full spring bloom when we visited.

A short ride on one of the city’s trademark blue and white trolley bus and you’ll arrive at one of Lausanne's premier art institutions - Collection de l'Art Brut.

This incredible museum, created by artist Jean Dubuffet, is a destination for academics and art lovers alike. They come here to catch a glimpse into the creative minds of society’s outsiders through artworks by criminals and the mentally ill. The museum also displays works by those who are self-taught, isolated, or otherwise removed from mainstream movements of art. 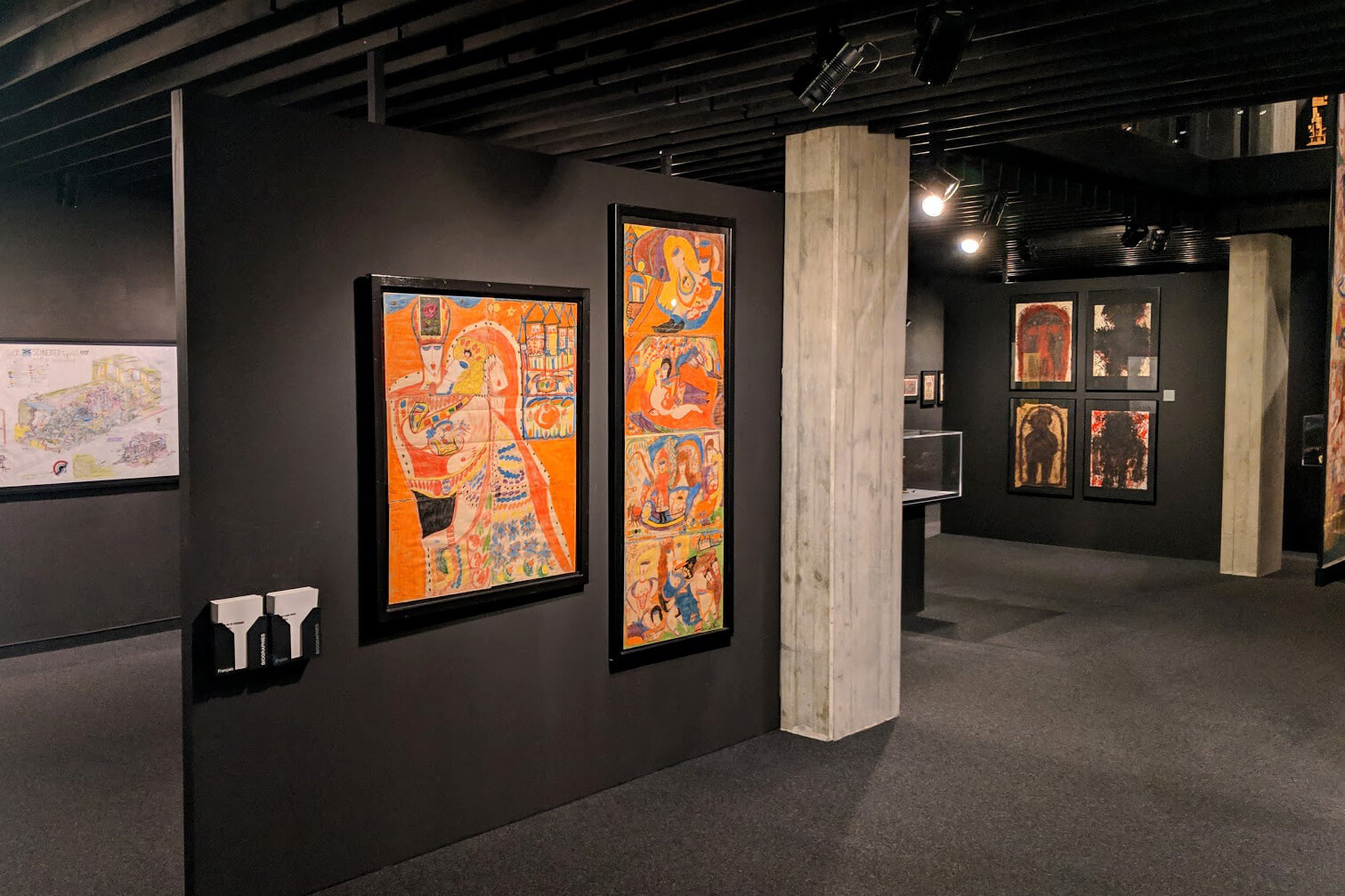 It is an utterly unique place. While I was afraid it might be a bit too cerebral, or artsy, in fact it was quite the opposite. The accompanying texts are well written, and there is a free audio guide if you prefer not to read.

The curiosity factor alone makes it worth visiting, but the collection is a real gem of a museum. The special exhibit on Japanese outsider art brought intriguing new questions to the subject: How does culture and language shape an artist’s visuality?

The Museum of Contemporary Design and Applied Arts is currently located in an old town house right next to the cathedral. Though small, the museum served up one of the most creatively curated exhibits I have ever seen.

We had wanted to end our trip with a boat cruise on Lake Geneva. Instead, we returned to MUDAC for a second time to visit the special exhibit Nose to Nose: Contemporary Perfumers. Each room had a different method of communicating complex scents and teaching you how to identify individual elements of a perfume. These scent delivery devices included giant accordion fans, glass bell jars and, our personal favorite, balloons! 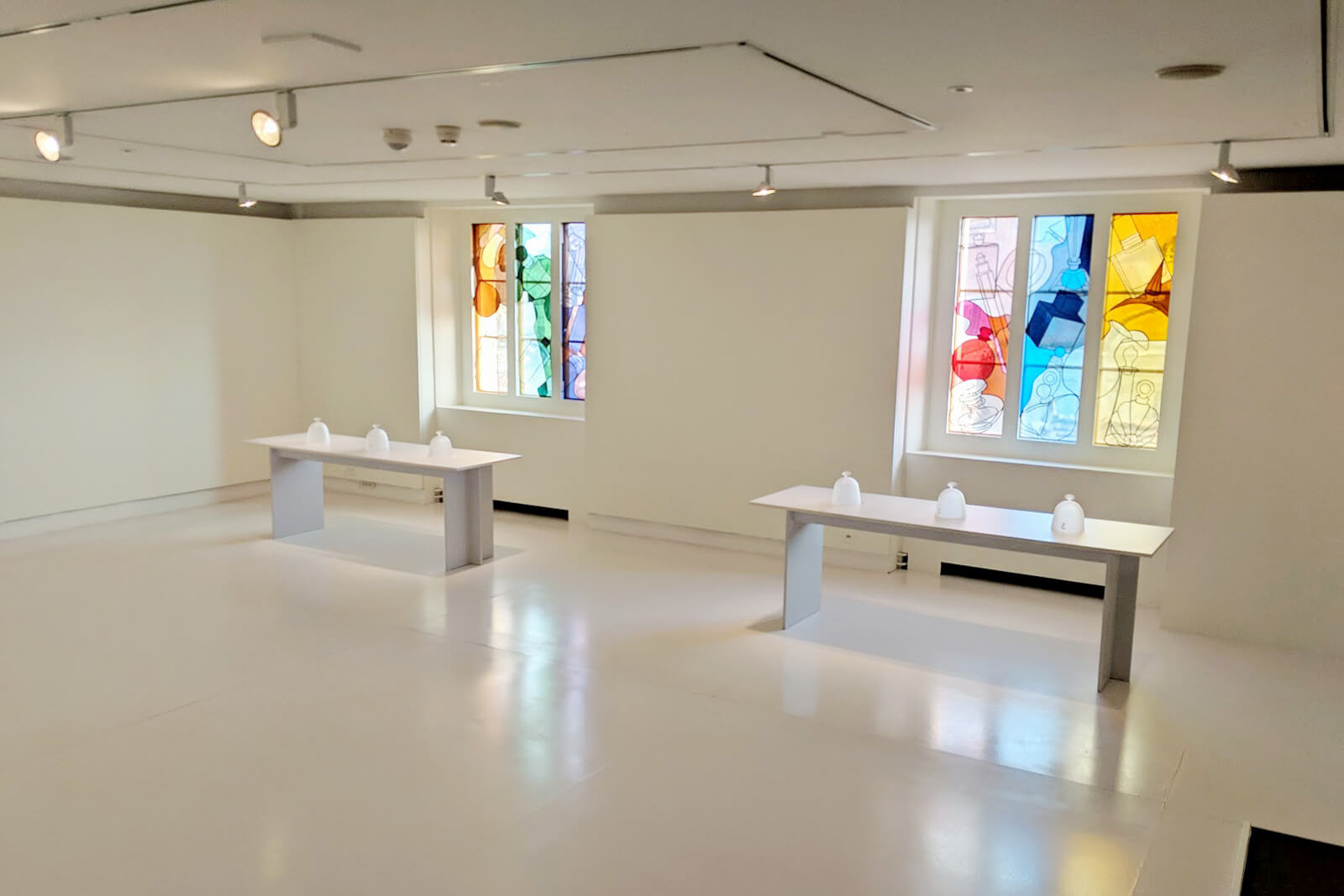 Beautifully designed tearaway sheets of accompanying literature on the perfumers, usually one man and one woman per room, made a nice souvenir. These sheets detail their story, CV, and the scent notes of the six perfumes on display. You could take a break to rest your nose in the large reading room full of colorful material on perfume, ringed by portraits of each of the master perfumers represented.

There was also a fascinating room detailing the history and development of perfumes and their bottles, a family tree of scents going back 100 years! Even if museums aren’t your usual thing, it’s a seriously good exhibit, and a real masterpiece of curatorship. This special exhibit runs until June 16th, and since it’s an interactive olfactory experience it can be enjoyed by kids as well.

Located right next to the Olympic museum, the Musée de l'Elysée is a first-rate photography museum housed in a former chateau with views of the lake.

Photography museums are a bit rare these days, and this one is an absolute gem. There were two exhibits wrapping up. One was devoted to Martine Franck, a reportage photographer from the golden age of photojournalism who produced emotive monochrome works during her travels and assignments. She worked in a similar vein to Henri Cartier-Bresson, who was her good friend. 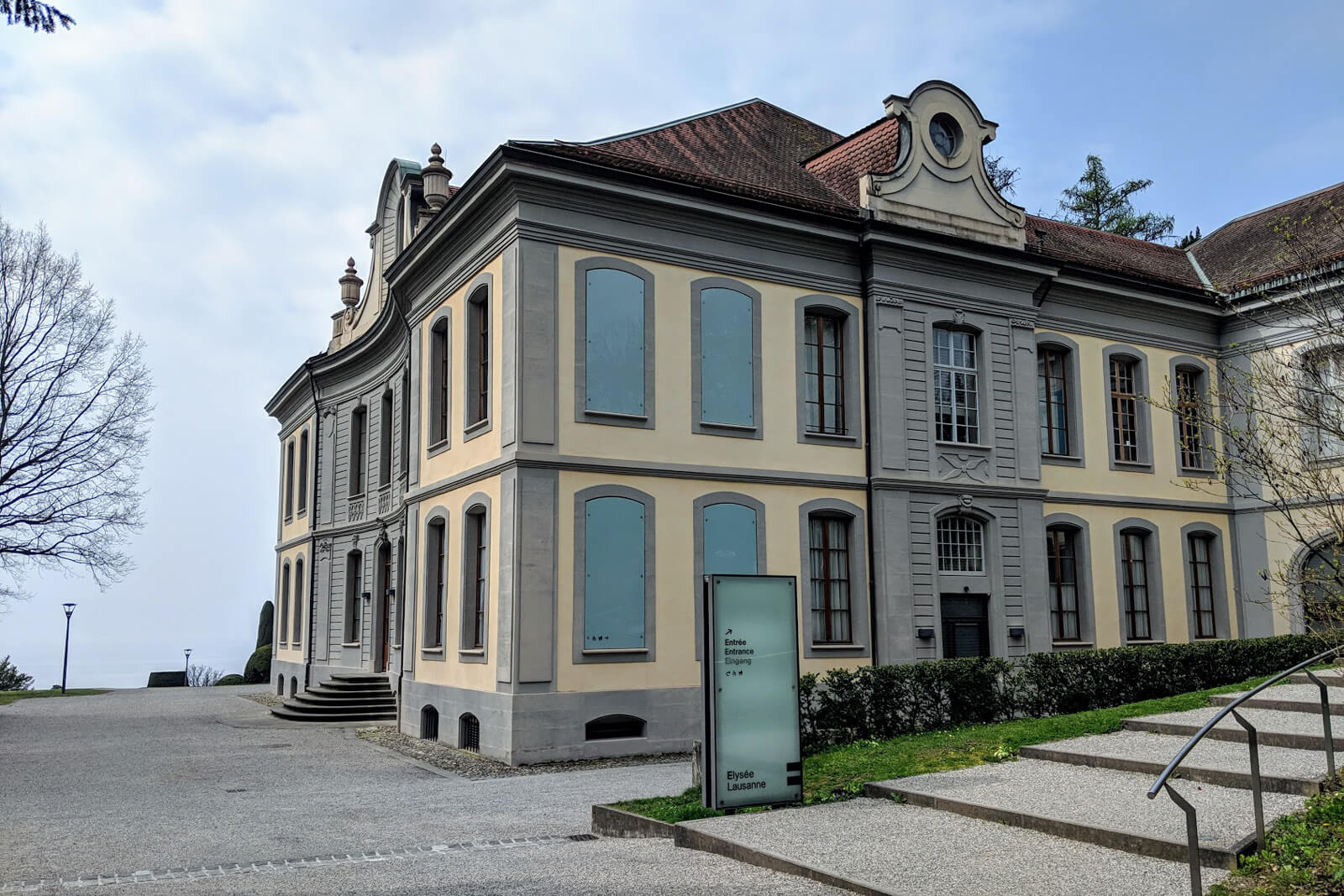 The second exhibit was entirely different, devoted to a young photographer, Vasantha Yogananthan. She innovates modern narrative photographic practices that blur the lines between art, narrative, and photography. The museum bookstore also has the largest single collection of photography books and monographs I have ever seen. For anyone interested in photography, innovative curatorship, or photobooks, this place is a must visit.

Lausanne is clearly an example of a city that has put considerable effort and investment into the arts and culture. This shows in the quality and creativity of the institutions.

Over the course of three days, we visited five museums and several cultural landmarks - at no point were we fatigued! Even the Louvre can be a bit too much after a few hours.

This speaks to the quality of Lausanne's cultural institutions, and the people who run them. But as good as they are now, it looks like they might be getting even better. The new Platform 10 initiative is set to create an entirely new arts district near the beautiful art nouveau train station, complete with a fresh architectural vision.

The opening is scheduled for October 2019, and most of the city's public museums, including MUDAC, will be moving over to the new arts district. If you can swing it for the Platform 10 opening, it promises to be an exciting event. I know I will be going as soon as I can. The temperatures were as hot as ever but the thunderstorms stayed away. Germany won the quarter-finals and tens of thousands of World Cup fans hit the streets partying. There were more air shows than one could count... 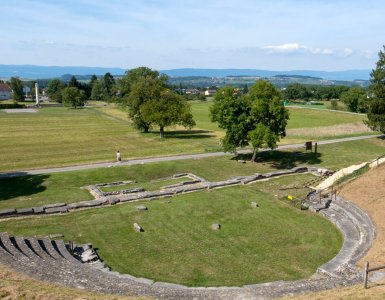 The canton of Vaud's marketing slogan is "Lake Geneva Region", but it is far more diverse. On a recent e-bike tour, we saw Roman artifacts and...

I imagined a jazz festival with deep bass strings humming, whisker like drum sticks scratching jazz beats, and husky divas or melancholic trumpets vibrating our sorrow, like Sarah Vaughan’s or John Coltrane’s. All that...

7 museums and activities for a memorable Thurgau getaway

Manage Cookie Consent
To provide the best experience, we use technologies like cookies to store and/or access device information. Consenting to these technologies will allow us to process data such as browsing behavior or unique IDs on this site. Not consenting or withdrawing consent may adversely affect certain features and functions.
Manage options Manage services Manage vendors Read more about these purposes
View Preferences
{title} {title} {title}
35 Shares
Share35
Tweet
Share
Pin
WhatsApp