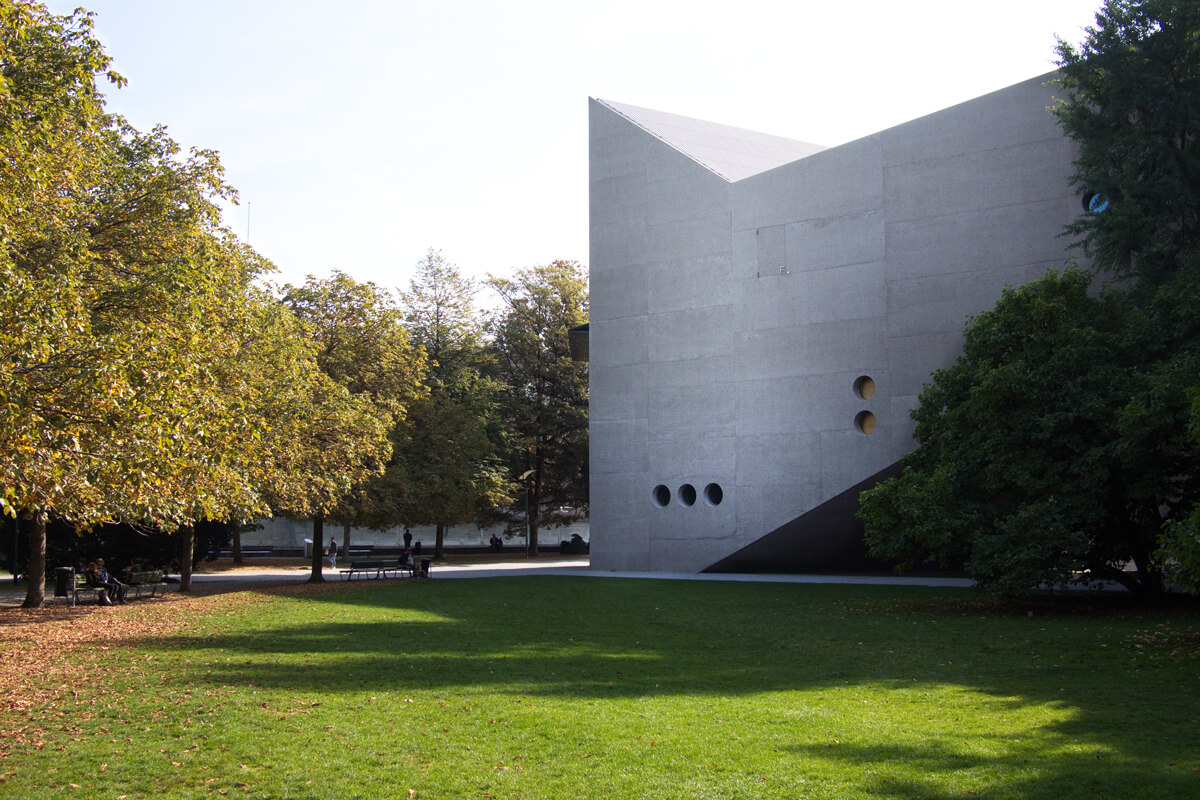 If you travel Switzerland without visiting the Swiss National Museum in Zurich, your trip is incomplete. There, we said it.

Why? Because with a rich history dating back millions of years, Switzerland holds a really interesting story in its bosom. And the Swiss National Museum in Zurich brings is all together, from stone age artifacts to knights’ armor and scripts from the Reformation.

Even those who are into architecture will have a field day thanks to the new museum wing. Now, let me show you around the largest and most significant depository of Swiss history and culture.

Some background on the Swiss National Museum

At first glimpse, this neo-Gothic fairytale castle looks pretty medieval. However, architect Gustav Gull built the Swiss National Museum only in 1898 in order to mark the 50th anniversary of the Swiss federal constitution.

The building still retains the grandeur of that era in its size and exterior magnificence. Today, it is Switzerland’s largest castle of the times which is open to the public. Bordering the public Platzspitz Park, the museum grounds are a popular place for the lunch crowds.

About the permanent museum collection

Known in German as Schweizerisches Landesmuseum, this sprawling museum houses a permanent collection of cultural-cum-historical objects. Included are sections on Swiss history, interiors, furnishings, military history, and a vast collection of art, crafts and fashion items. 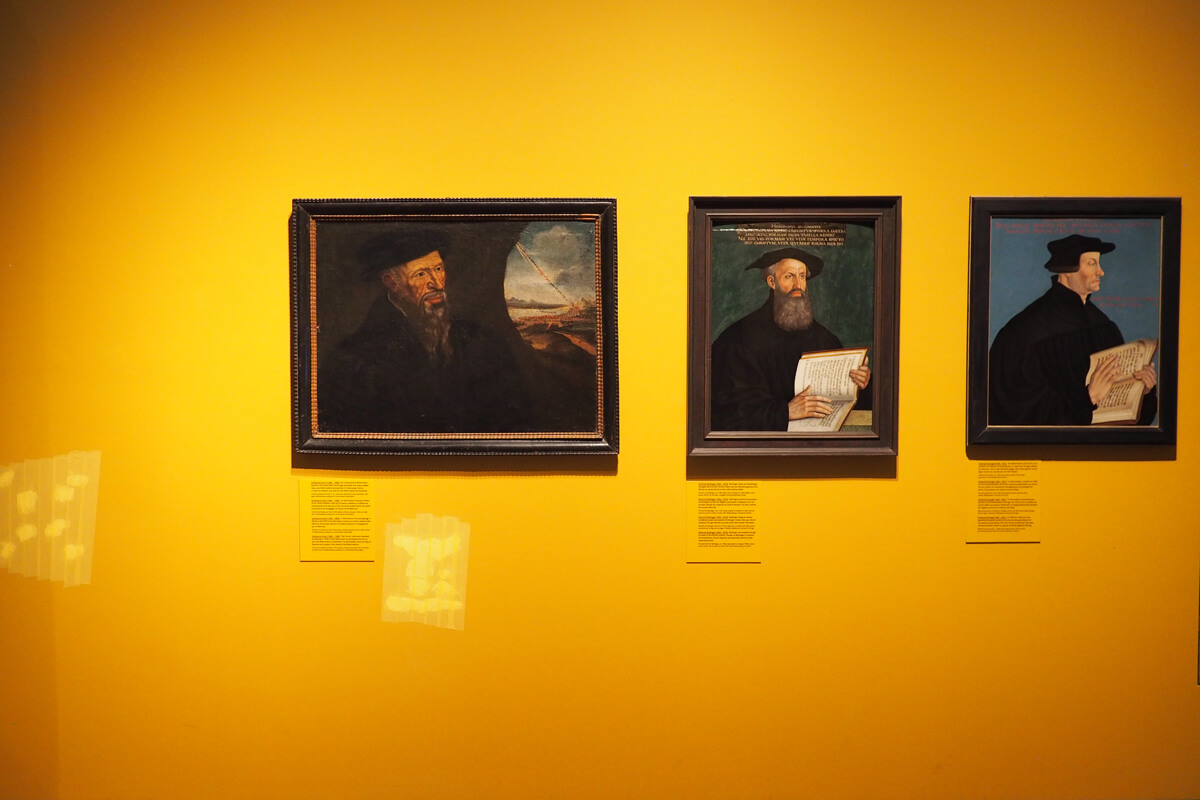 In total, the Swiss National Museum exhibits more than 840’000 objects, offering an extensive romp through Swiss history. From handicrafts to the everyday objects reflecting the uniqueness and authenticity of Switzerland, the museum has it all.

I predict that you will find yourself amused learning the stories behind the origin of winter sports in the Alps, Swiss watches, Swiss chocolate, or the iconic Helvetia.

Can you spot Helvetia among the museum visitors? 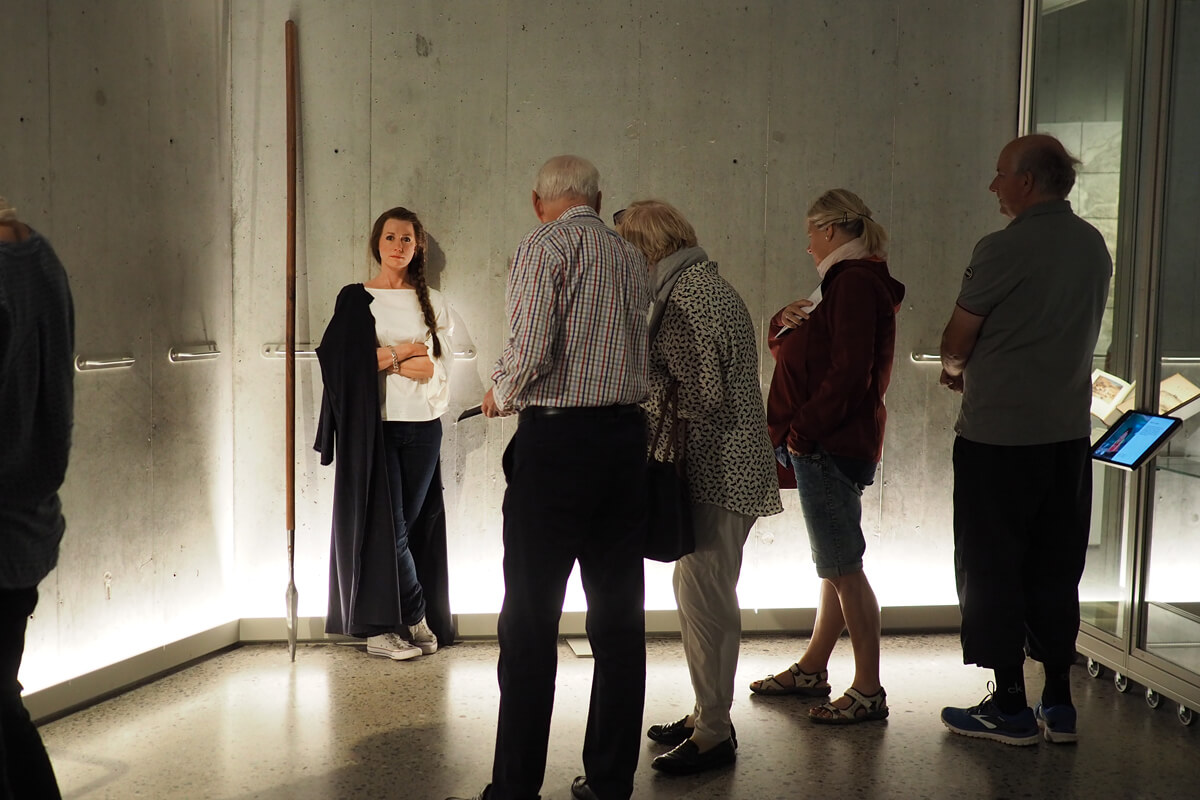 There are costumes, early watches, furniture and a great deal of military weapons. In fact, you will find a collection of weaponry and arms in the Tower of Arms (Waffenturm).

I find the medieval knights’ armors fascinating every time: 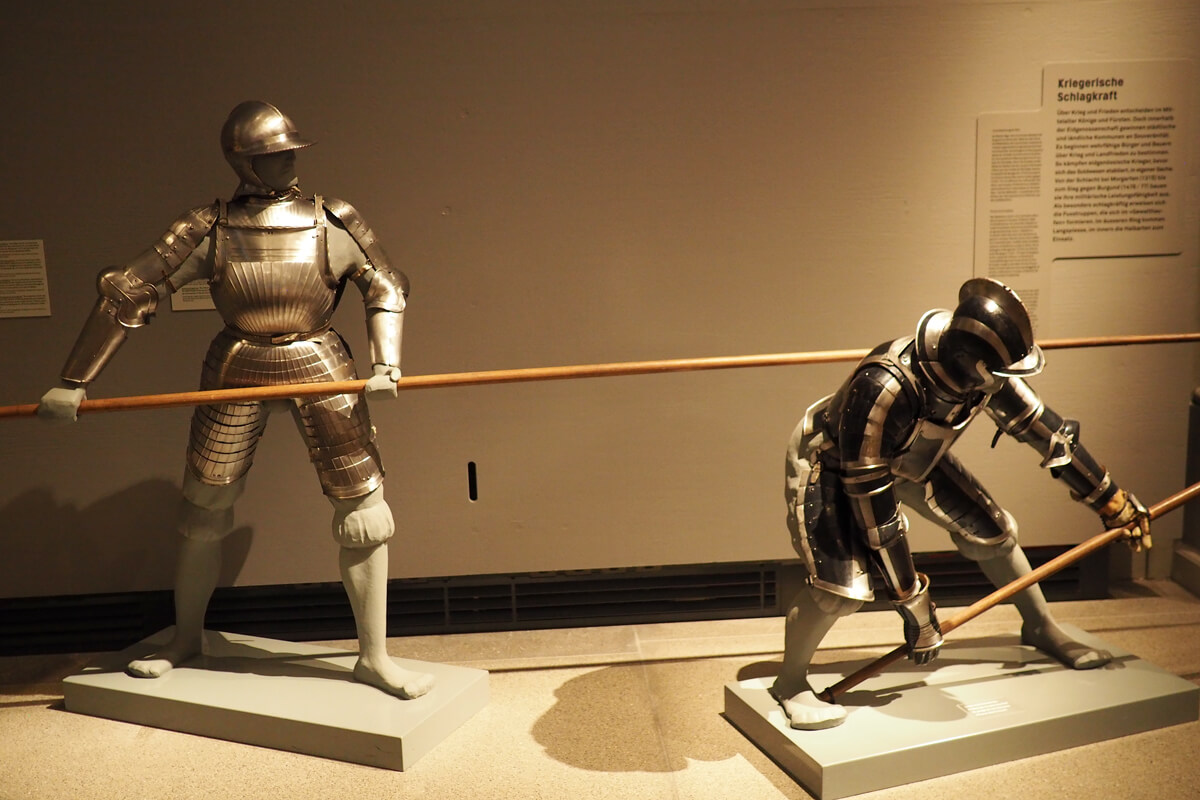 The Hall of Arms houses a splendid mural, painted by the late 19th-century Bernese artist, Ferdinand Hodler. The work is known as the Retreat of the Swiss Confederates at Marignano and depicts a defeat in 1515 by the French (top right): 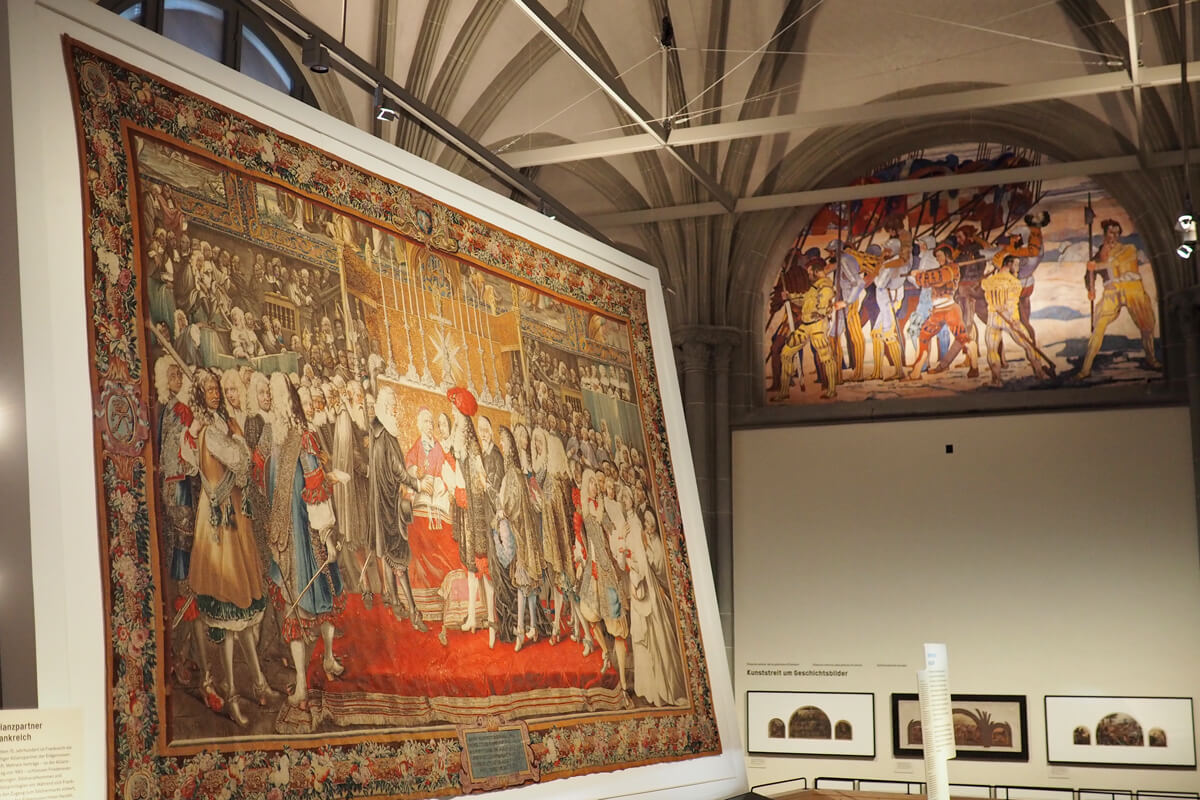 The museum also showcases a large collection of arts, home crafts and decorative items. And those who are into coins should head straight for the Münzkabinett.

Several areas of the permanent collection are dedicated to themes, such as Swiss banking. There, you can travel back in time as you look at outdated bank notes or study a block of numbered accounts. 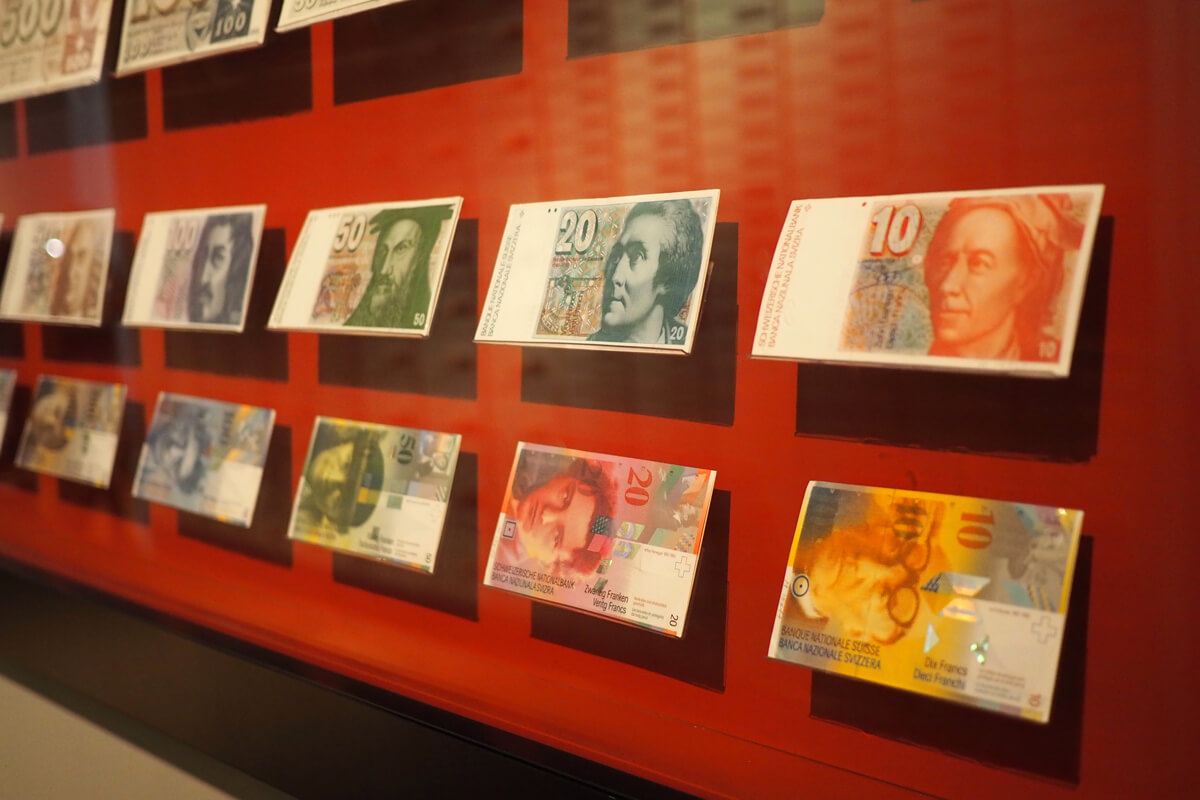 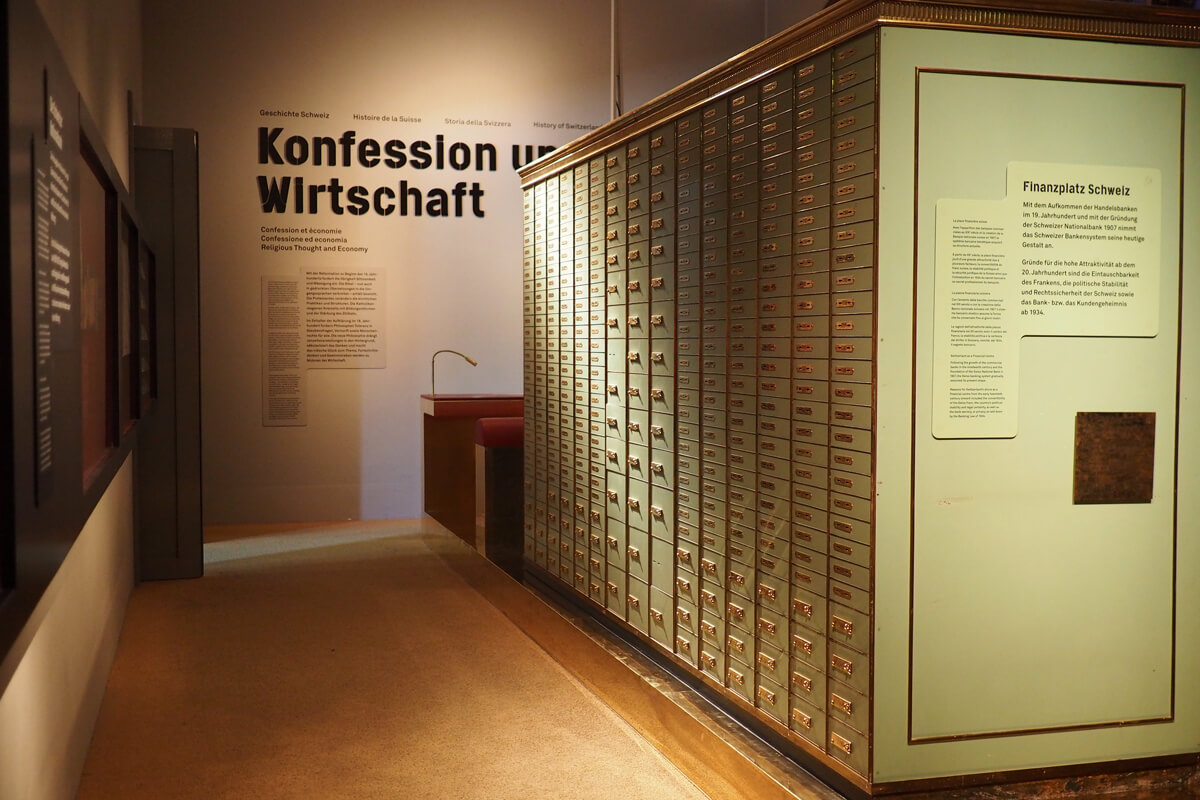 What Swiss homes looked like back in the day

The Swiss National Museum has long been popular for the eleven perfectly preserved Stuben from the past six centuries. These wood-paneled rooms from the Gothic, Renaissance and Baroque periods were reconstructed inside the museum more than a century ago. There are elaborately painted furnishings and religious artefacts, as well as the typical smoke-free ovens.

Inside the new archaeology wing

In August 2016, the museum celebrated the opening of the long-awaited archaeology section. The reason for the wait was the construction of a brand-new wing designed by the Basel based architects Christ & Gantenbein.

Have a look at the museum courtyard and you will surely appreciate how the new wing attaches to the historic castle: 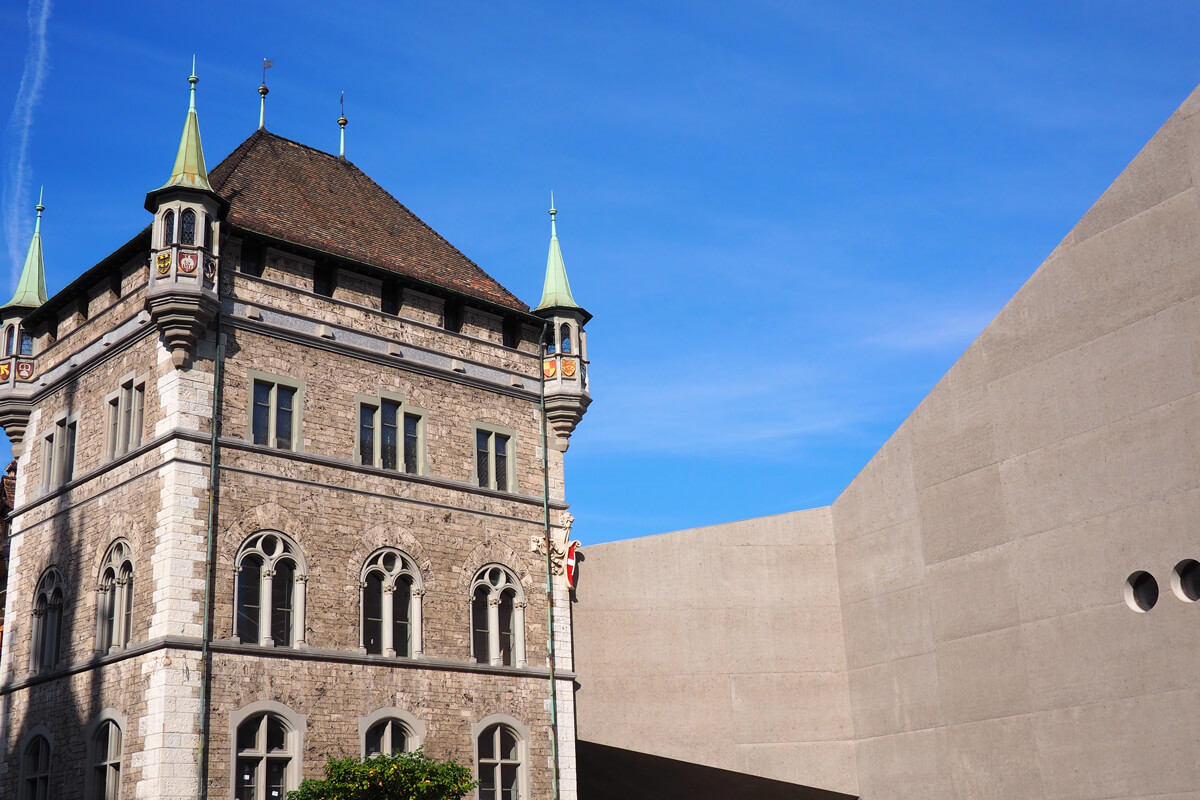 The highlights of the archeology exhibit are a remarkable Bronze Age embossed gold bowl, exquisite jewelry designed by the Alemanni tribe in Late Antiquity and countless prehistoric tools. Aptly named “Archaeology in Switzerland,” this wing boasts three sections, each offering a primer on Switzerland’s rich history related to Terra, Homo, and Natura. There, you will find many recent discoveries by Swiss archaeologists, as well as artefacts uncovered in the past two centuries. 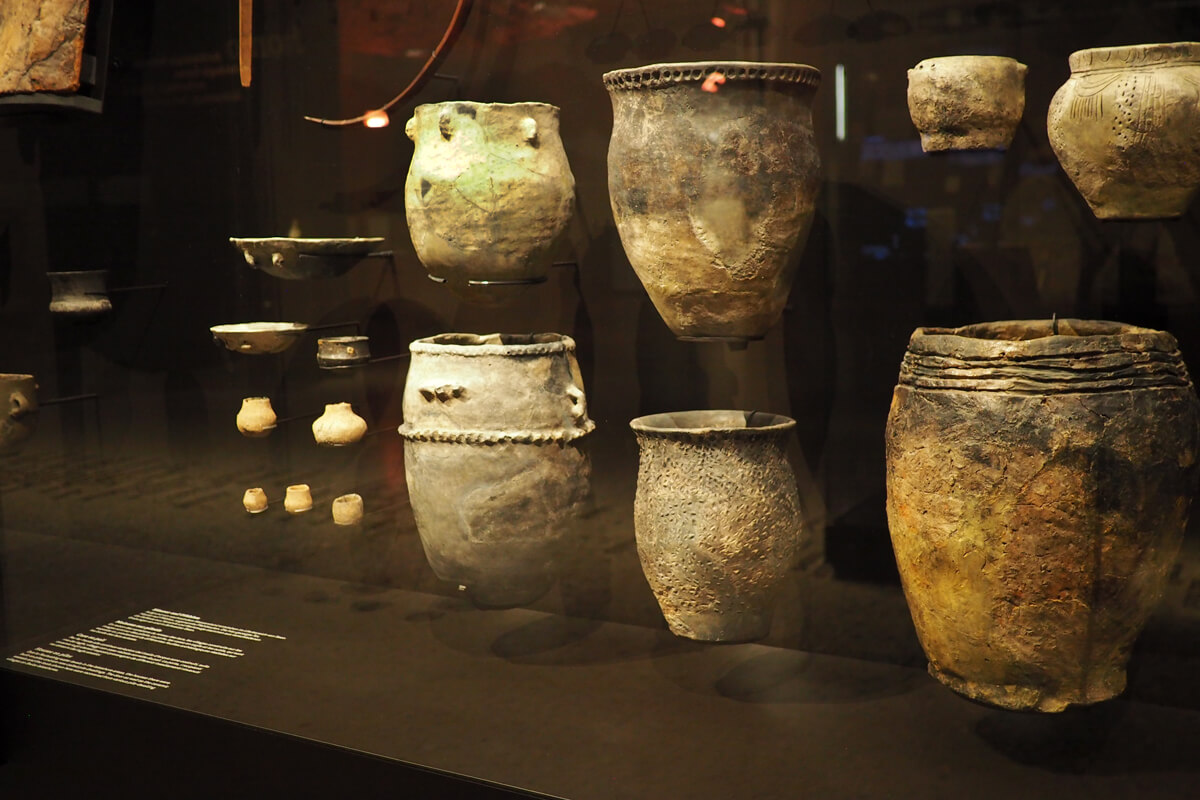 The museum organizes temporary exhibitions that pick up on the historical, cultural and social topics. These events are often supplemented with lectures, workshops, discussions, and readings. You will find e-guides, electronic quizzes and mobile tables where items can be touched. Temporary exhibitions complement the permanent collection and illustrate various elements of Swiss history and culture in depth.

And finally, the extensive museum shop hawks about any Swiss souvenir, book or designer item you can think of: 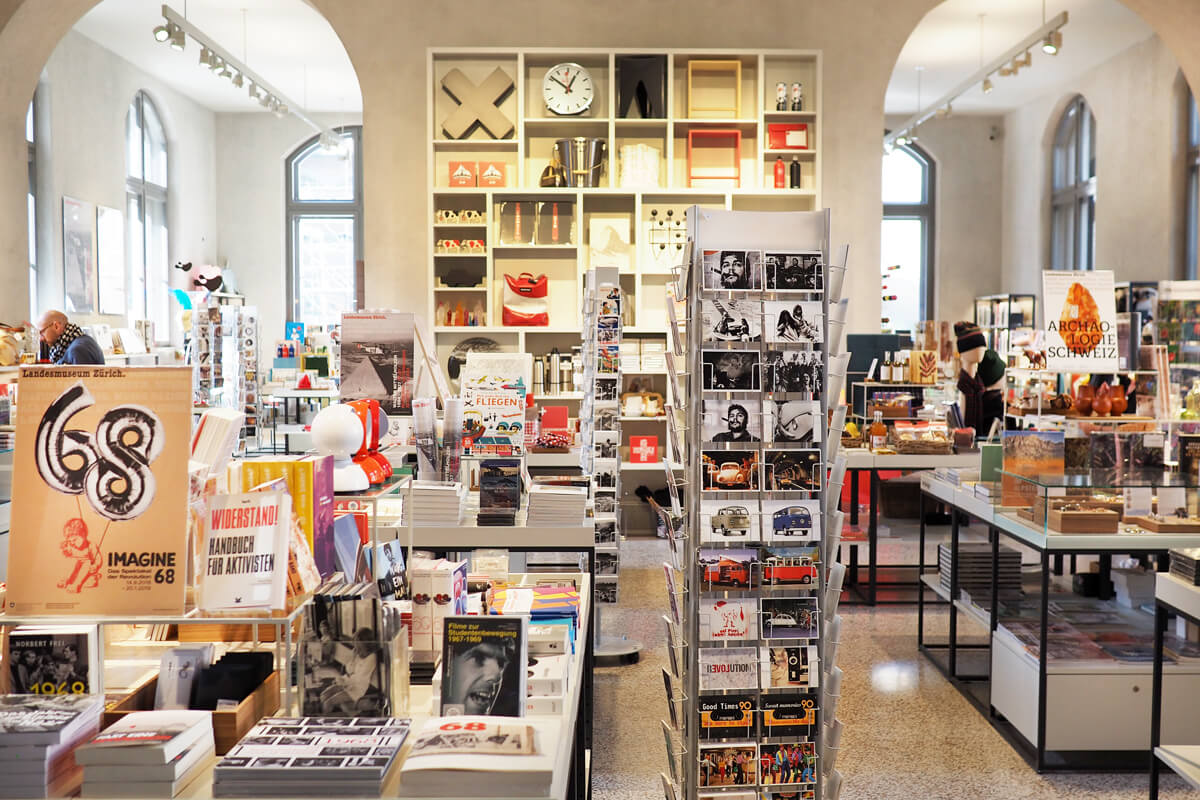 How to get to the Swiss National Museum in Zurich

Getting to the Swiss National Museum is easy. The museum sits beside the Zurich Central Station (Zürich Hauptbahnhof) and is easily accessible from anywhere in the city center. So I went on a girlfriend getaway to Leukerbad in Valais

When my best friend recently announced her visit to Switzerland, I had to ensure that her stay be memorable. Leukerbad was calling our names... 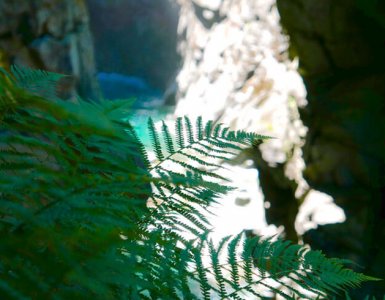 You would not think it today, but until quite recently, Switzerland was a rather poor country. When we hiked to Rofflaschlucht, we traced the incredible... Every May 6 for more than 500 years, new recruits for the Pontifical Swiss Guards are being sworn into service in the Vatican.

Manage Cookie Consent
To provide the best experience, we use technologies like cookies to store and/or access device information. Consenting to these technologies will allow us to process data such as browsing behavior or unique IDs on this site. Not consenting or withdrawing consent may adversely affect certain features and functions.
Manage options Manage services Manage vendors Read more about these purposes
View Preferences
{title} {title} {title}
126 Shares
Share92
Tweet2
Share
Pin32
WhatsApp