If you are staring a blank, you are not to blame. Because Switzerland is not exactly known as a music factory that’s churning out global hits. However, just like anywhere else, there is a thriving music scene in the land of alphorns and yodeling. So, we would like to introduce you to Swiss music that has defined generations. They are true classics that bring back memories for those who grew up in Switzerland, and we think you should know them, too.

Turn up the speakers and take a listen. Here is some Swiss music you need in your life:

Here is a great Swiss folklore anthem that is more philosophical than you might think. The protagonist, Schacher Seppli, lives in poverty but sees the beauty of life itself. In the end, he is put to rest next to a rich man’s grave, and he concludes that we are all the same.

Don’t ask why, but this was a huge hit in the 90’s. The song stayed in the charts for 25 weeks but resonated way longer. That’s because Peter Steiner was featured in a TV commercial for Milka chocolate.

Someone on YouTube summarized this song perfectly: “?t’s about a very womanly woman from the Bern suburb of Bümpliz who is sweeping everyone (especially men, of course). She is Mother Nature in person, ‘has more than 100 children – and each spring a new one’, she’s Venus. Or, you could also call her the Bernese version of the Girl of Ipanema.”

A melancholic rendition about an adult beverage: Campari Soda.

“Homesickness” is a song about being lost in a city, far away from the mountains.

This hip hop song brings back nostalgic memories for an entire generation! Musician Stress was born in Estonia but spent his teens in Lausanne where he’s earned his fame.

These three Swiss brothers grew up in Down Under, and they sure turned Switzerland’s charts upside down with their hit “Up In The Sky”!

This singer songwriter from the French speaking part of Switzerland has received much recognition. After performing “79 Clinton Street” at the FIFA Ballon d’Or in 2015, it took off.

This smash hit plays off the popular area code (or pre-dial) for the Swisscom mobile network: 079. Left with just a fraction of her phone number, the singer is longing to reconnect with the girl he’s fallen for.

Did we miss any Swiss music that should have made the list? Please let us know! 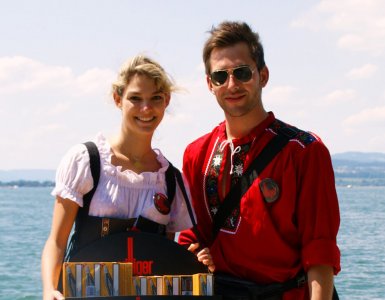 According to our romantic beliefs, the average Swiss is either a Heidi or a Peter type. Statistics paint a slightly different picture... Manage Cookie Consent
To provide the best experience, we use technologies like cookies to store and/or access device information. Consenting to these technologies will allow us to process data such as browsing behavior or unique IDs on this site. Not consenting or withdrawing consent may adversely affect certain features and functions.
Manage options Manage services Manage vendors Read more about these purposes
View Preferences
{title} {title} {title}
451 Shares
Share435
Tweet11
Share
Pin5
WhatsApp