Swiss Garbage Carriage from the Future Horse drawn carriages have long been the primary means of transportation. Now replaced by cars and trucks, the Swiss town of Avenches strongly believes in the merits of horse power as an innovative prototype of an e-carriage was presented to the public!

Interestingly, the idea is not just driven by cost cutting or creative engineering. Moreover, the developers of the e-carriage have an ideology of bringing horses back into our lives. According to Acroscope, the Swiss government’s R&D lab, “hoofed animals of the 21st century stand for a positive and ecological image, represent social integration and contribute to society as living engines.” 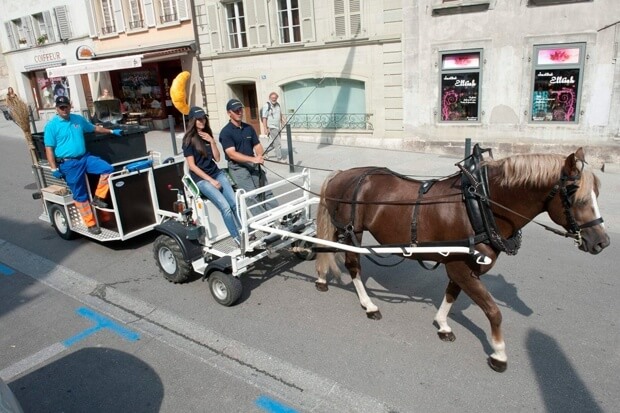 These new carriages are devised to support the horse when loads get too heavy. An electrical engine (similar to the one found in e-bikes) automatically kicks in to take a load off the horse’s shoulders. 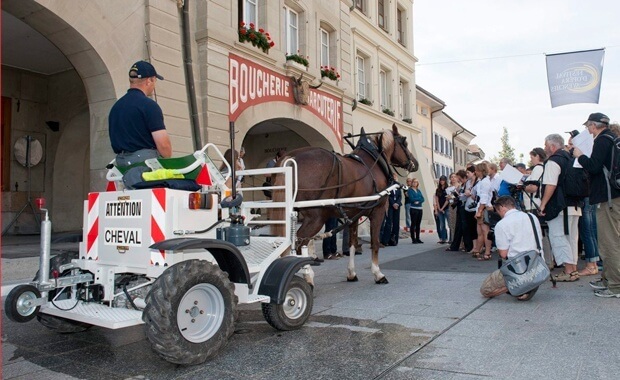 The town of Avenches has started their e-carriage pilot at the beginning of August. So far, horse drawn e-carriages are successfully used to collect garbage three times per week, as well as paper for recycling every other week! Given this new technology, I can imagine a number of uses to take cars and trucks off the roads: How about using e-carriages for mail delivery or as school buses?

Now, that would be a hoof step into the future! Maybe you need a conversation starter for this Friday's happy hour party. Or you want to earn some bragging rights with your Swiss parents-in-law. Either way, Newly Swissed is hooking you up with the latest oddities... The purpose of the scything competition is to keep traditional farming methods alive. Scything used to be a traditional way of clearing long grass, herbs and weeds... Why the Zero Star Hotel in Switzerland deserves five stars

At the zero star hotel in Switzerland, you'll sleep under a million stars. View all the hotels by the artists, Frank and Patrik Riklin.